What Are the Biggest Upcoming Risks for Organizations?

Changes in consumer demand and cyberattacks are the two biggest risks organizations expect to face in the next two years, according to polls undertaken by Marsh McLennan. Other notable risks include workforce and industry disruptions, as well as challenges associated with international trade.

The poll results also show that the risk outlook of businesses is heavily influenced by their sector. For example, financial sector companies highlighted digital risks — stemming from new technology adoption and cyberattacks — while industrial sector firms were most concerned about international trade.

Today’s dynamic global risk environment necessitates that organizations proactively navigate upcoming risks. Those that manage to do so will emerge more resilient and agile in the face of future disruptions.

Globally, political rights and civil liberties have been on the decline for sixteen consecutive years. Business and democracy have a strong positive relationship, but they do not always go hand in hand. For example, in the past five years, India has become less politically free, but more friendly to businesses.

Europe has historically enjoyed a high rate of political and civil freedoms, as well as a high ease of doing business. This changed during the pandemic, where Europe’s scores fell substantially in business freedom. Governments across the continent imposed restrictions on business and economic activity to curb the health consequences of COVID-19. This had a huge impact on businesses, amounting to a loss of about 15% in industrial production a month after the implementation of containment measures.

Recovery seems to be back on track, according to data from latest edition of the Index of Economic Freedom, where we observe a strong bounce back in business freedom scores across Europe. This recovery, however, will be tested by the challenges stemming from the Ukraine crisis. 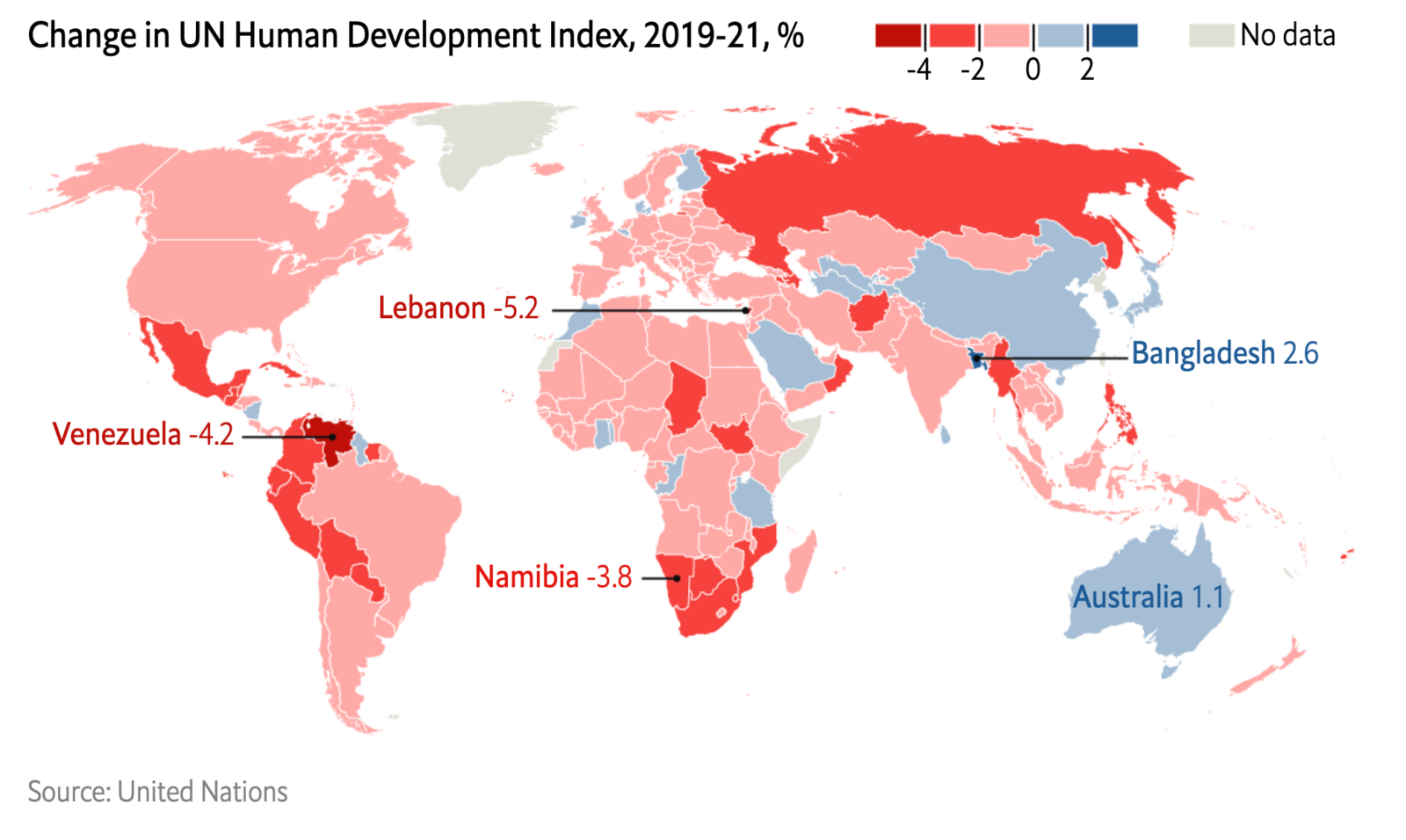 The standard of living dropped for people around the world in 2021, wiping out any gains since 2016, the United Nations reports in its recent Human Development Index. The report comes just as world leaders met at the United Nations General Assembly to discuss the most pressing global issues.

The U.N. reports that the pandemic, the Ukraine conflict and the effects of climate change are driving reversals in human development in more than 80% of the countries surveyed. This is the second year in a row that the global standard of living has dropped — the first time the index has dropped two years in a row since it started in 1990.

The index measures factors like life expectancy, education and income. COVID-19 caused the biggest fall in life expectancy worldwide since World War II. The pandemic particularly accelerated the decline of countries in Latin America and the Caribbean. Living standards also dropped significantly in South Asia and fell even further in sub-Saharan Africa. The ongoing cost-of-living crisis spurred by inflation and Russia’s invasion of Ukraine means that conditions are unlikely to improve in the near future. 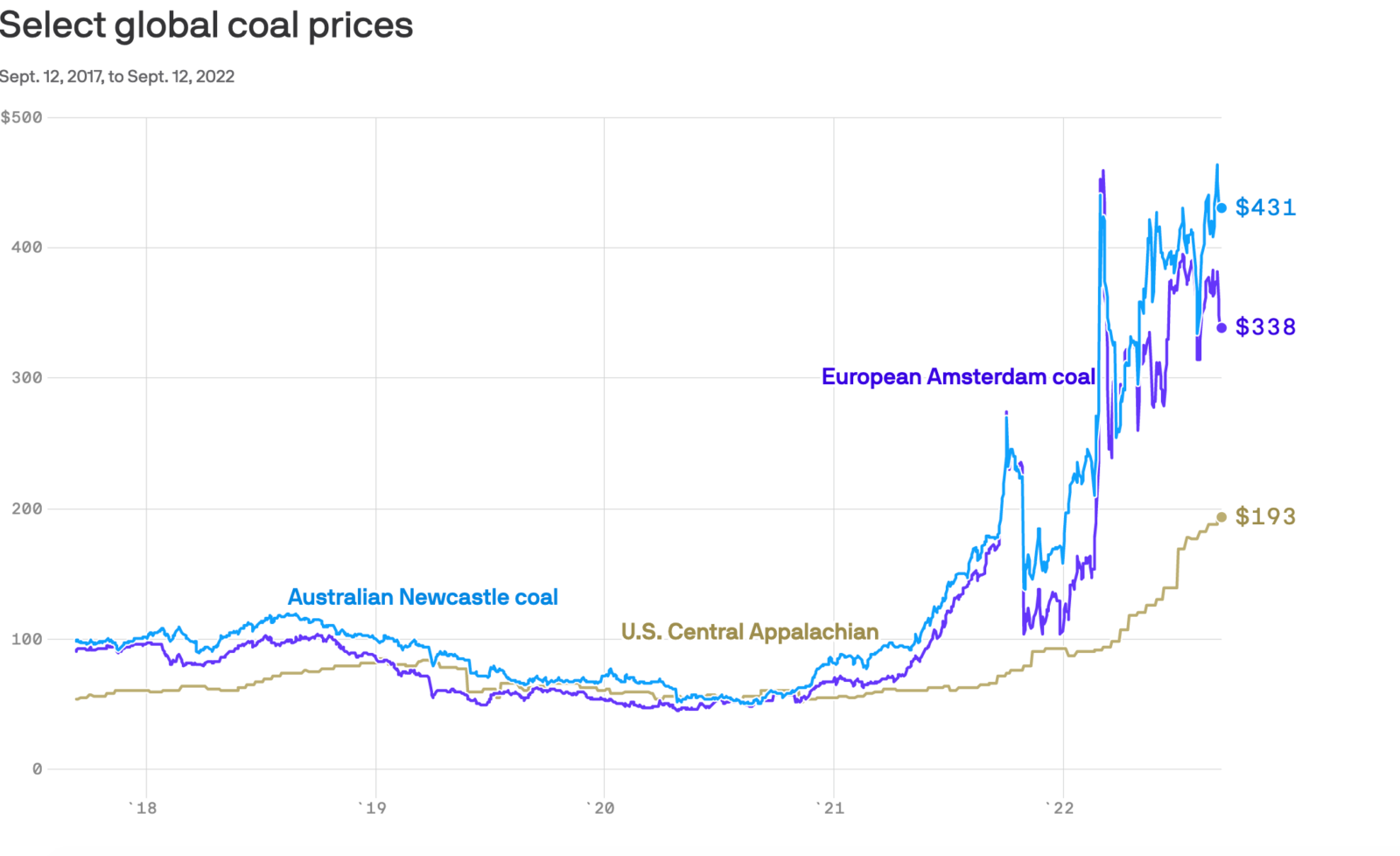 Coal prices are skyrocketing around the world as countries brace themselves for winter amid an energy crisis. Demand for coal surged this year after Russia’s invasion of Ukraine and subsequent Western sanctions caused natural gas and oil shortages worldwide.

The competition has driven coal prices to record highs: Europe’s benchmark coal futures rose to $320 a ton, about 90% higher than last year. Asian benchmark Australian Newcastle coal hit a record $431 a ton, and U.S. coal prices rose to $193 a ton. That’s roughly three times higher than the benchmarks in the second quarter of 2021. The EU’s ban on Russian coal went into effect last month, increasing the region’s reliance on imports from Indonesia and Australia.

China and India are the world’s largest coal consumers, accounting for 70% of global coal demand. And China has increased its reliance on coal this year as drought has reduced its hydroelectric power production. But Europe is one of the main drivers behind the current push for coal. High demand for coal power is expected to continue throughout the year, despite nearly 200 countries pledging to reduce their coal consumption at the 2021 United Nations Climate Change Conference.

The Dollar Is At Its Strongest Value in 20 Years 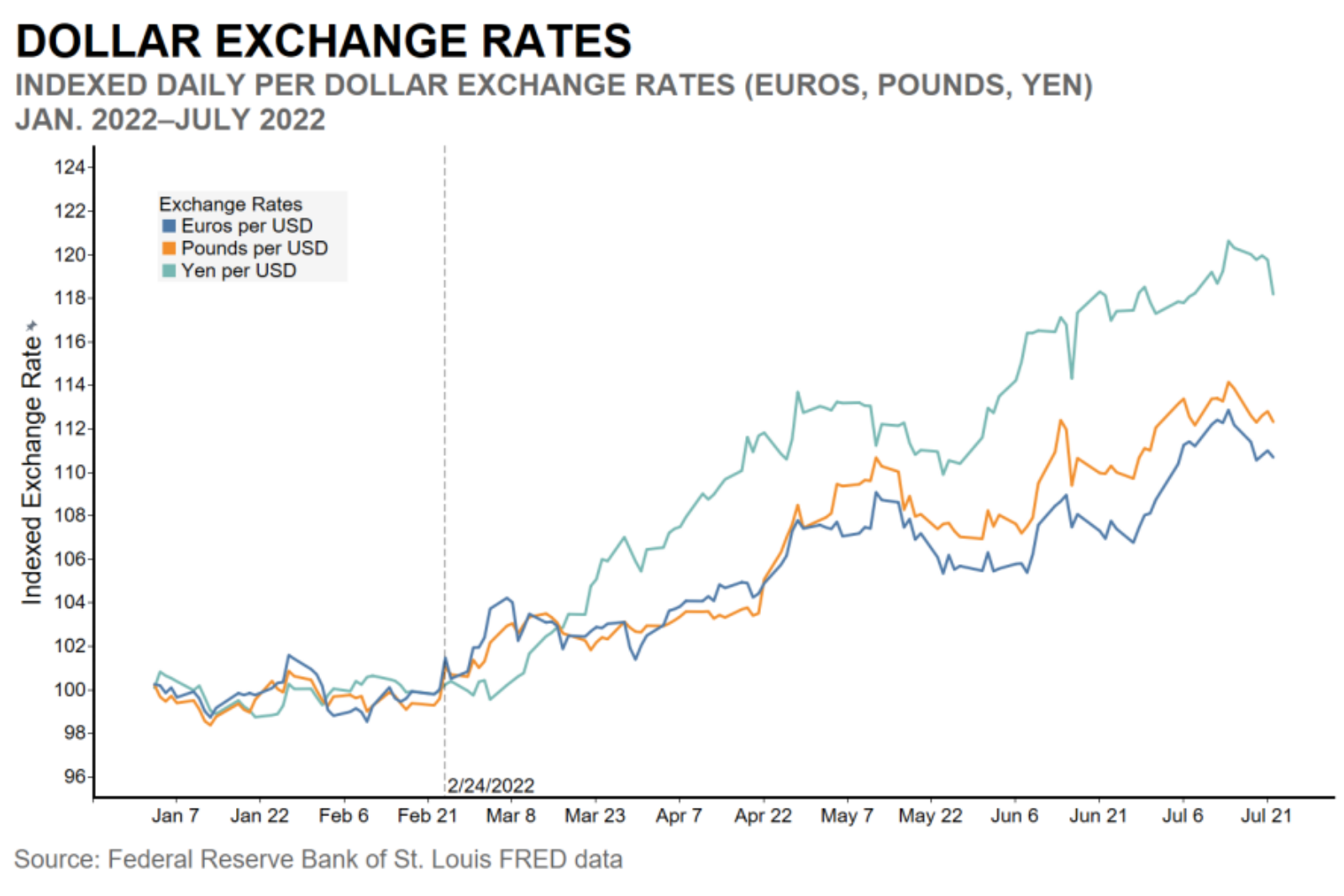 The U.S. dollar is at its strongest value relative to the Japanese yen and British pound since the 1980s and trading on par with the euro for the first time in nearly two decades. The driving force behind the rising strength of the dollar is U.S. monetary policy — as the Federal Reserve raises interest rates to curtail inflation, it also pushes up the price of the dollar. The Bank of Japan, the Bank of England, and the European Central Bank have also raised interest rates, albeit less aggressively than the Fed.

Russia’s invasion of Ukraine also spurred an inflow of capital into the U.S., raising demand for dollars as global investors consider the U.S. a safer haven than Europe, the U.K. or Japan. The U.S. economy has recovered from the pandemic more quickly compared to other countries; its GDP is now 15.6% higher than the third quarter of 2019. In comparison, the eurozone’s GDP grew by 8.3% and Japan’s declined by 3.6%, over the same period.

The strength of the dollar will help U.S. inflation as it lowers the cost of imports. But it also has drawbacks, as American products become more expensive in international markets and emerging economies like China and India pay a higher dollar price for commodity imports.