The global commodity market saw a surge in prices at the end of 2020 and is predicted to continue recovering in 2021. The World Bank reported a 15% increase in oil prices and a 4.7% increase in non-energy prices (commodities not consumed as a fuel or transformed into another fuel) last month. Food prices surged by 2.6% in December, while metal prices increased by more than 10%.

Increasing demand and production are contributing to commodity price recovery. For instance, demand for steel and metals rose with the resumption of infrastructure projects across the globe that had been previously disrupted by COVID-19 shutdowns.

Populations across the world also have relatively more purchasing power after receiving checks from government relief packages. As the economy recovers, investors are optimistic, especially with the vaccines’ potential to change people’s health, mobility and the economy at large.

Are We in a Crypto Winter? 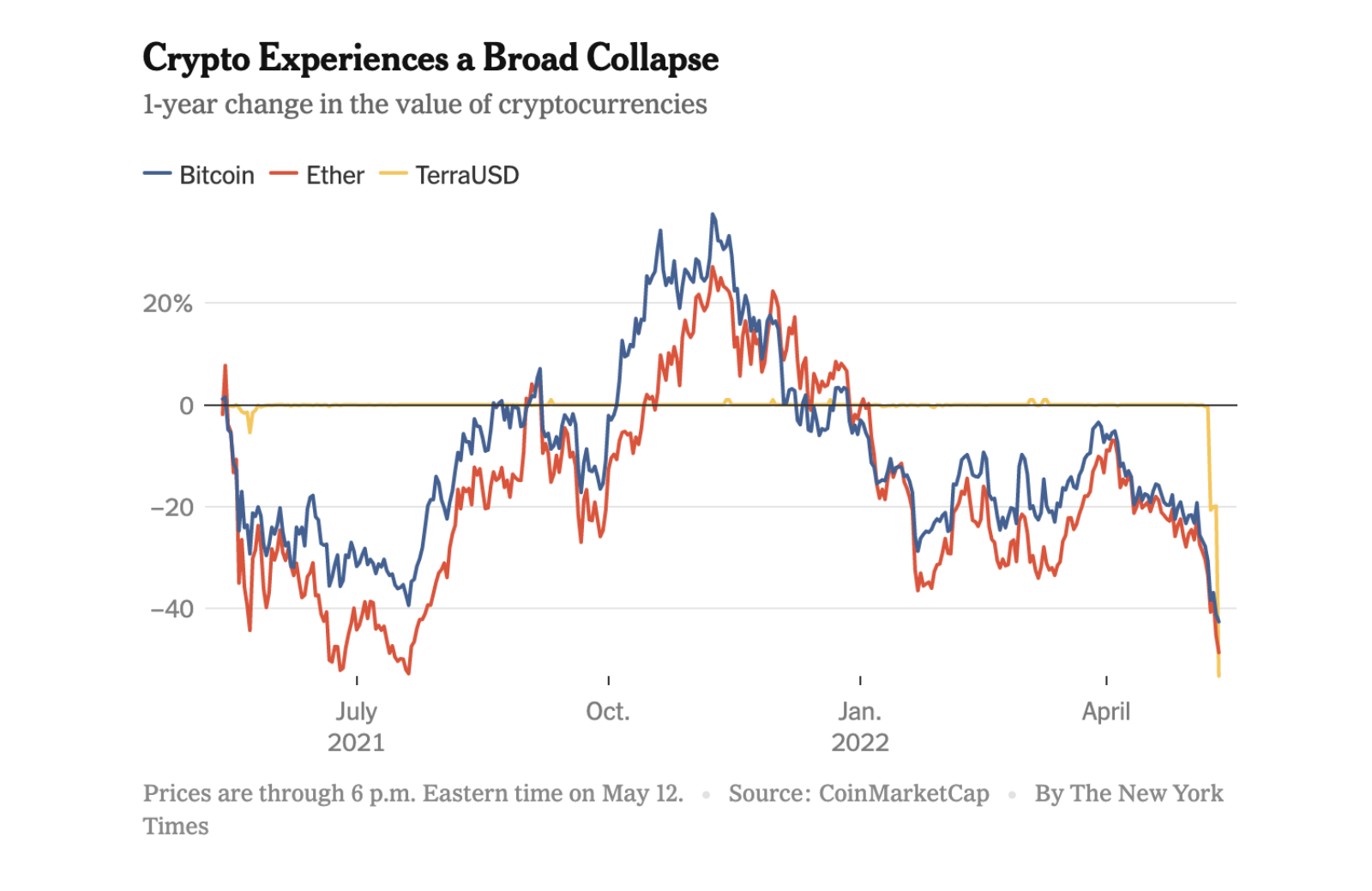 Digital currencies took a nosedive last month, with the price of Bitcoin dropping 20% across just five days in May. In the first five months of the year, its price dropped 60%, to $26K. Coinbase’s stock price was down 82% compared to April 2021. And Ether lost more than 30% of its value, according to The New York Times.

The combination of rising interest rates, inflation, and economic instability related to the Russia-Ukraine conflict contributed to this value plunge — but so did TerraUSD. TerraUSD is a “stablecoin” — supposedly backed by stable assets. In reality, it was linked algorithmically to another digital currency, Luna, which lost nearly all of its value and implicated TerraUSD’s value.

Though slow, the market is showing signs of recovery. In a piece for Forbes, Alkesh Shah, head of digital assets strategy for Bank of America, says that although “the media is writing as if it’s the end of the sector,” as of early June, “the market has corrected about 40% to 45%.” Similarly, the NYT notes that “Any panic might be overblown” as “the average Bitcoin owner on Coinbase would not lose money until the digital currency’s price sank below $21,000.”

Over Half of the World’s Car Buyers Want Electric

More than half of car buyers around the world want to go electric, according to new research on consumer habits. Fifty-two percent of people looking to buy a car said they want their next car to be an electric vehicle — the first time the number has exceeded 50%.

Italy has the most consumer interest in electric vehicles (73%), followed by China (69%) and South Korea (63%). Australia (38%) and the U.S. (29%) are the least interested in electric vehicles out of the 18 countries surveyed. The vast majority of people, 88%, said they are willing to pay more for an electric car.

The survey shows that the world may have reached a tipping point when it comes to electric vehicles, which could help reduce global warming. The interest in EVs has risen rapidly — 22 percentage points — over the last two years, driven primarily by concerns over climate change or government penalties on gas-powered vehicles. Fossil fuel emissions from automobiles and other vehicles are a significant contributor to global warming.

100 Best and Worst US Companies 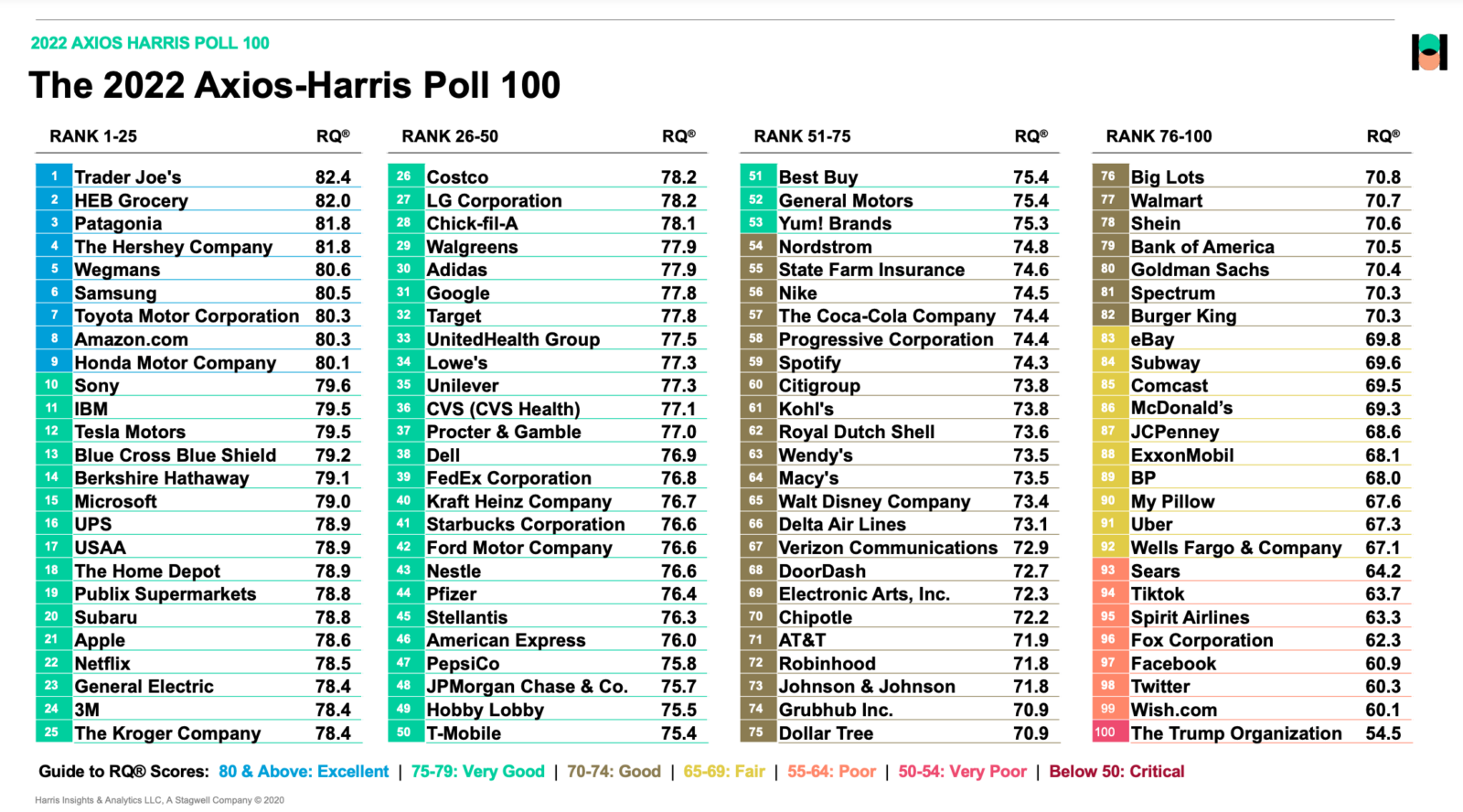 In a poll ranking the most visible U.S. companies by reputation, brands that Americans considered good employers were also ranked the best companies overall, reveals a new Axios Harris Poll 100. The poll surveyed over 33,000 U.S. adults between March and April of this year to determine which companies “excel or falter in society.”

Among the top 10 most reputable companies were three grocery chains, two car manufacturers, and big brands like Patagonia, Amazon, and Samsung. Seven out of the top 10 companies ranked highly in culture, meaning Americans considered them good places to work. Companies like Trader Joe’s and Patagonia also performed well across demographics, ranking highly regardless of age or political party. Companies that Americans consider the least reputable include Twitter, Wish.com, and the Trump Organization.

Political or public scandals also affected how companies performed year over year. Disney dropped sharply in the rankings, likely in reaction to its initial silence—followed by its public stance against—Florida’s anti-LGBTQ legislation. “The findings suggest that companies that are slow to respond to political crises, or do it inconsistently, suffer the most in terms of consumer reception and trust,” reported Axios.

The U.S. May Be Headed for a Recession

Rising inflation and recent dips in U.S. stock markets have caused some experts to forecast a recession for the U.S., reports Investment Monitor.

The U.S. economy shrank by 1.4% in the first quarter of this year, and rapidly rising interest rates have prompted concern that an economic downturn is around the corner. But banks are divided over the likelihood of a recession: Wells Fargo and Deutsche Bank expect a recession this year, while Goldman Sachs, Morgan Stanley, and the New York Reserve put the odds of a downturn at 25% or lower.

Decades-high inflation has reduced consumer confidence to its lowest point since 2011, with the majority of Americans (52%) reporting that they’re in greater financial distress now than last year. U.S. businesses also report lower confidence in the future, with over a quarter of business owners (29%) expecting a decrease in business activity.