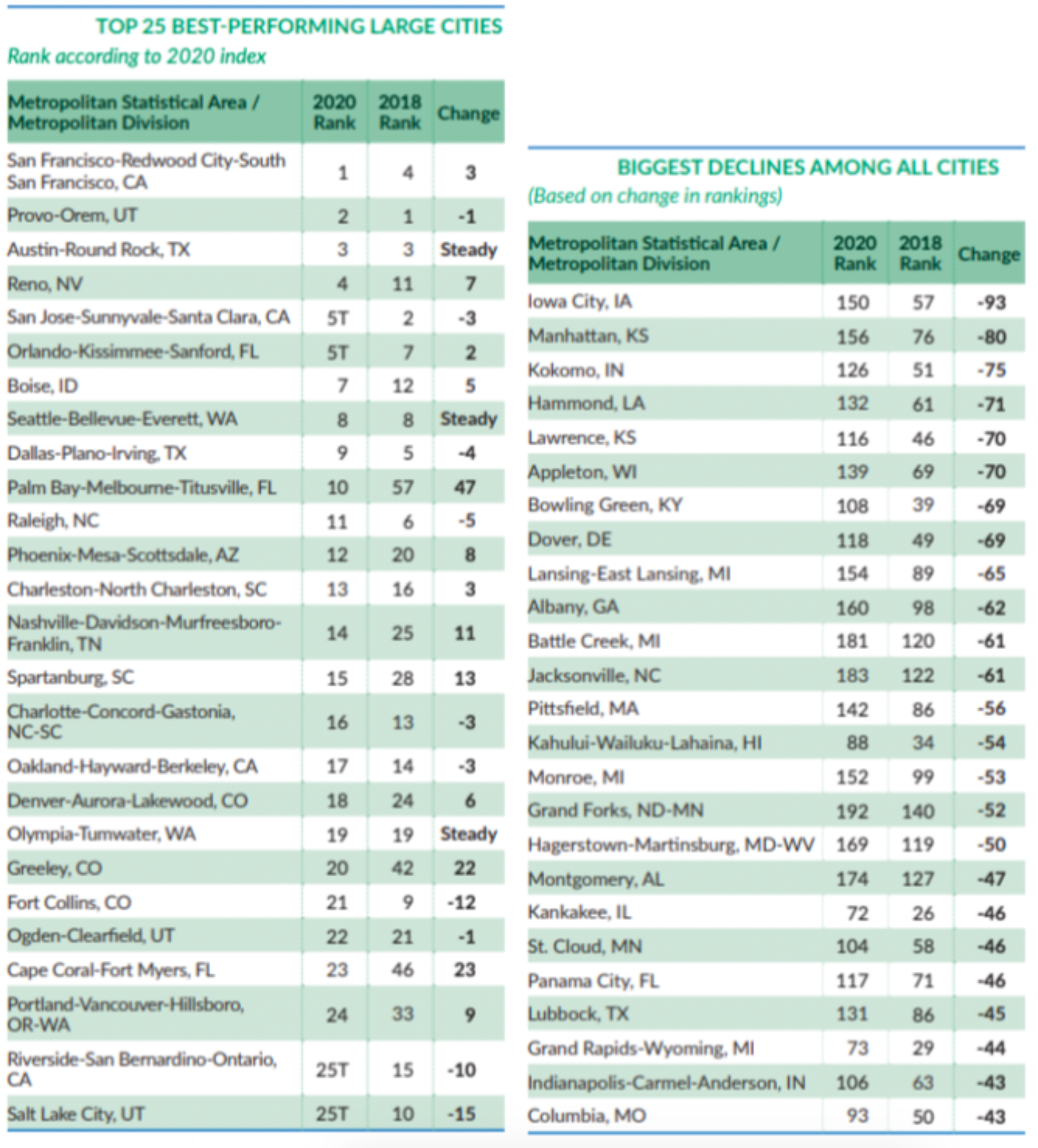 “Agriculture, logistics, and manufacturing are all sectors represented in the metro areas seeing the most significant declines,” the report reads, as listed on the table to the right. The trade war “hurt these sectors, since they are interconnected not only to each other but also to the ups and downs of international markets.”

Conversely, the tech industry continues to power the economies of the best performing U.S. cities, chief among them San Francisco. Cities enjoying the tech wave and diversifying their approach are moving up the ranks, such as Reno, Nevada. “The arrival of Tesla’s Gigafactory 1 transformed [the Reno] metro’s economic landscape,” the report says.

Cities reliant on the defense sector, natural resources and exports also saw improvement — though export-oriented cities, such as Charleston, South Carolina, may face challenges should trade tensions between the U.S. and China persist.

Less-Educated Women Left the Workforce During the Pandemic 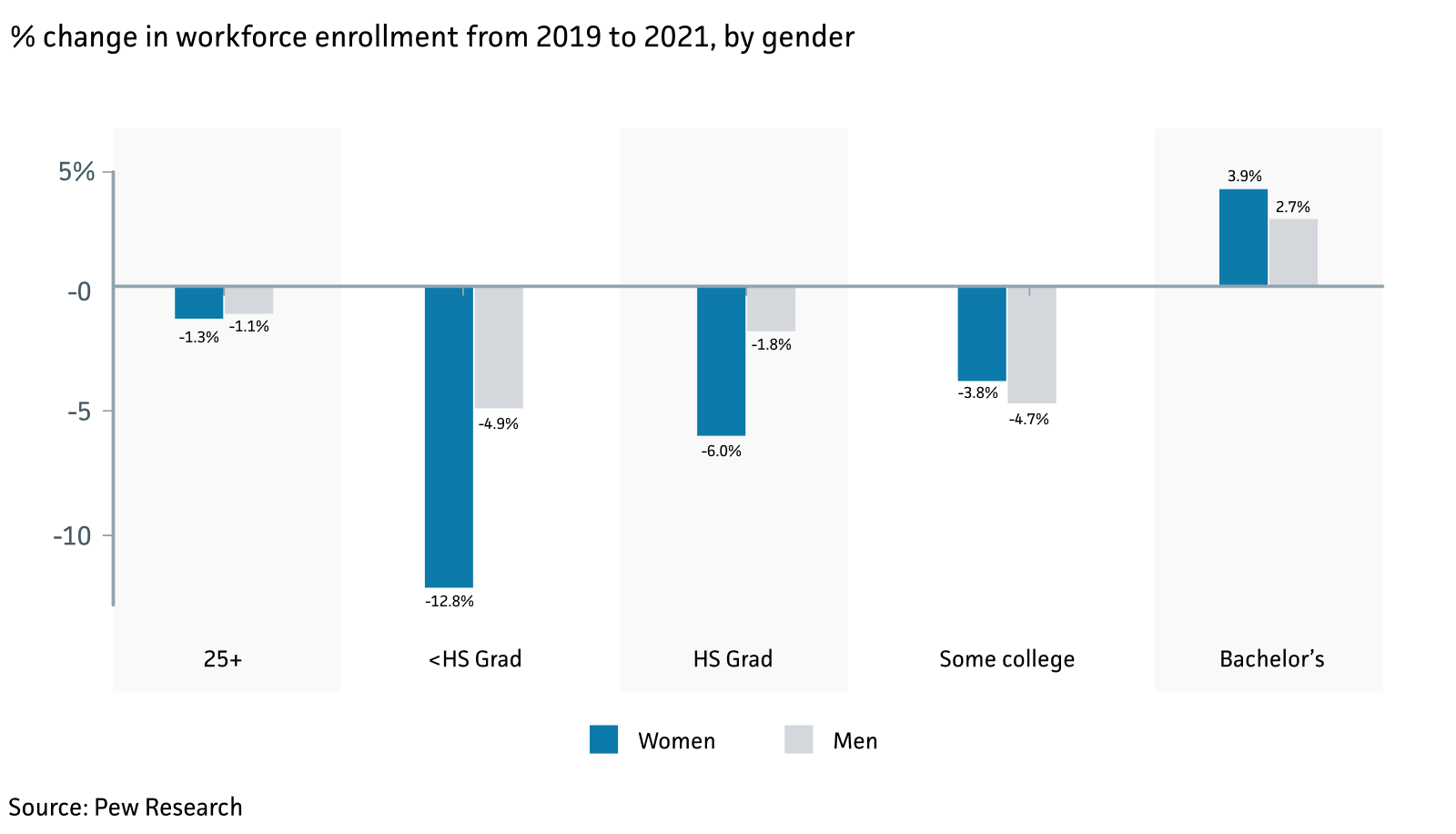 The pandemic affected the workforce differently depending on people’s gender and education status, according to new research from Pew. In 2021, the percentage of women aged 25 or older in the workforce dropped by 1.3% compared to 2019’s numbers, and those with high-school degrees were more likely to leave the workforce than their college-graduate counterparts.

The difference may be explained by the gender balance in industries affected by the pandemic. The health-care industry, for instance, is 60% women, and many workers are dealing with burnout after two years under stress. The same gender imbalance can be found in the food preparation and personal service occupations, per Pew.

Higher education enrollment in the United States fell a further 2.7% in 2021, according to new estimates by The National Student Clearinghouse Research Center. This follows a 2.5% drop from the preceding fall. In total, 938,000 fewer students have enrolled in colleges since the fall of 2019, before the pandemic, the center estimates.

The trend in college enrollment indicates more are inclined to join the labor market directly — taking minimum-wage jobs in part because rates have risen under increasing pressure and a competitive job market. Even more are turning toward trade schools in lieu of traditional universities. This also comes at a time when universities are navigating the COVID-19 landscape, with many courses shifting toward remote instruction.

Electric Autonomous Vehicles Have Huge Potential for the Freight Industry

Autonomous vehicles have come a long way since 1925, when the first radio-controlled car was driven around Manhattan’s streets, without anyone at the steering wheel.

With heavy duty vehicles accounting for about 19% of greenhouse gas emissions in the EU, according to a report by Marsh McLennan, the next phase of innovation for AVs is electrification, and the freight industry is expected to be among the first to adopt electric AVs (E-AVs). E-AVs will offer benefits such as enhanced sustainability, improved safety and reduced costs. The report also demonstrates how E-AVs compound technological benefits by facilitating data collection to develop safer business models. 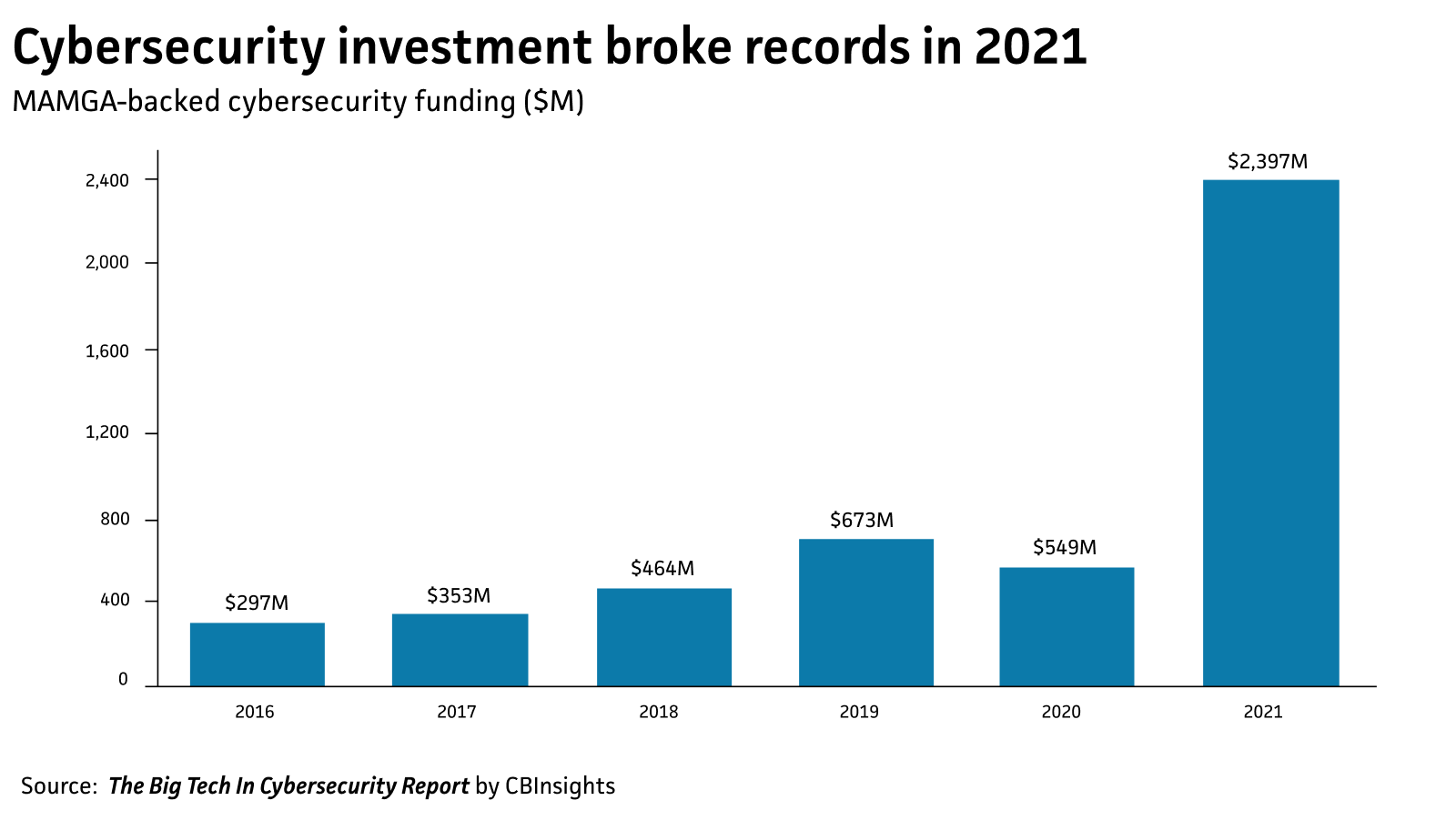