Hispanic Women Are Disproportionately Hit by Unemployment in US

Unemployment for Hispanic men rose by 12.5% between February and April 2020, 2.5% lower than the rate for women. Women are “overrepresented in some of the hardest-hit industries, such as leisure and hospitality, health care and education, but women — especially black and Hispanic women — lost jobs in those sectors at disproportionate rates,” according to Samantha Schmidt, a reporter on gender and family issues.

Strong majorities of survey respondents support preventing evictions and foreclosures for those who have lost jobs and providing business loans and tax cuts to keep workers on payroll, according to Pew.

Why the Number of US Homeowners Grew During COVID-19 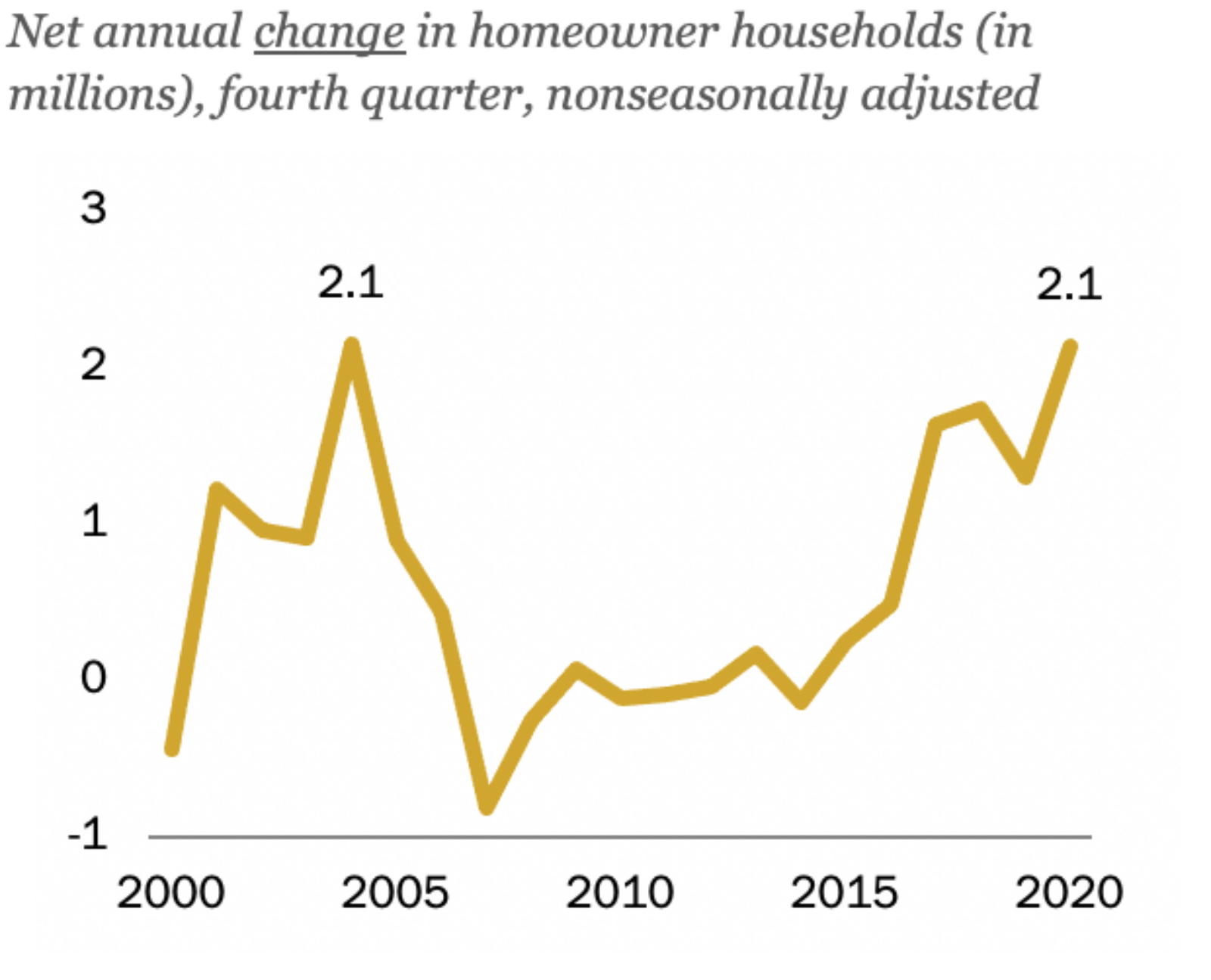 The number of homeowners in the United States grew by 2 million over the last year, reflecting a 2.6% increase. This is the seventh-largest percentage increase in homeowners since 1965, according to Pew Research Center. By the fourth quarter of 2020, there were around 83 million owner-occupied homes in the U.S.

This growth in homeownership, Pew Research Center states, resulted from economic growth and an increasing number of households over time. Although the unemployment rate during COVID-19 skyrocketed, job losses fell heavily on young adults and low-income workers, who are less likely to be potential homebuyers. In 2020, interest rates were at record lows, there was a slowdown in foreclosures and household incomes were at a high before the pandemic — all factors made it easier to enter the housing market. Experts predict that the housing market will remain strong in 2021, driven by low mortgage rates, the vaccine distribution and growing consumer confidence. 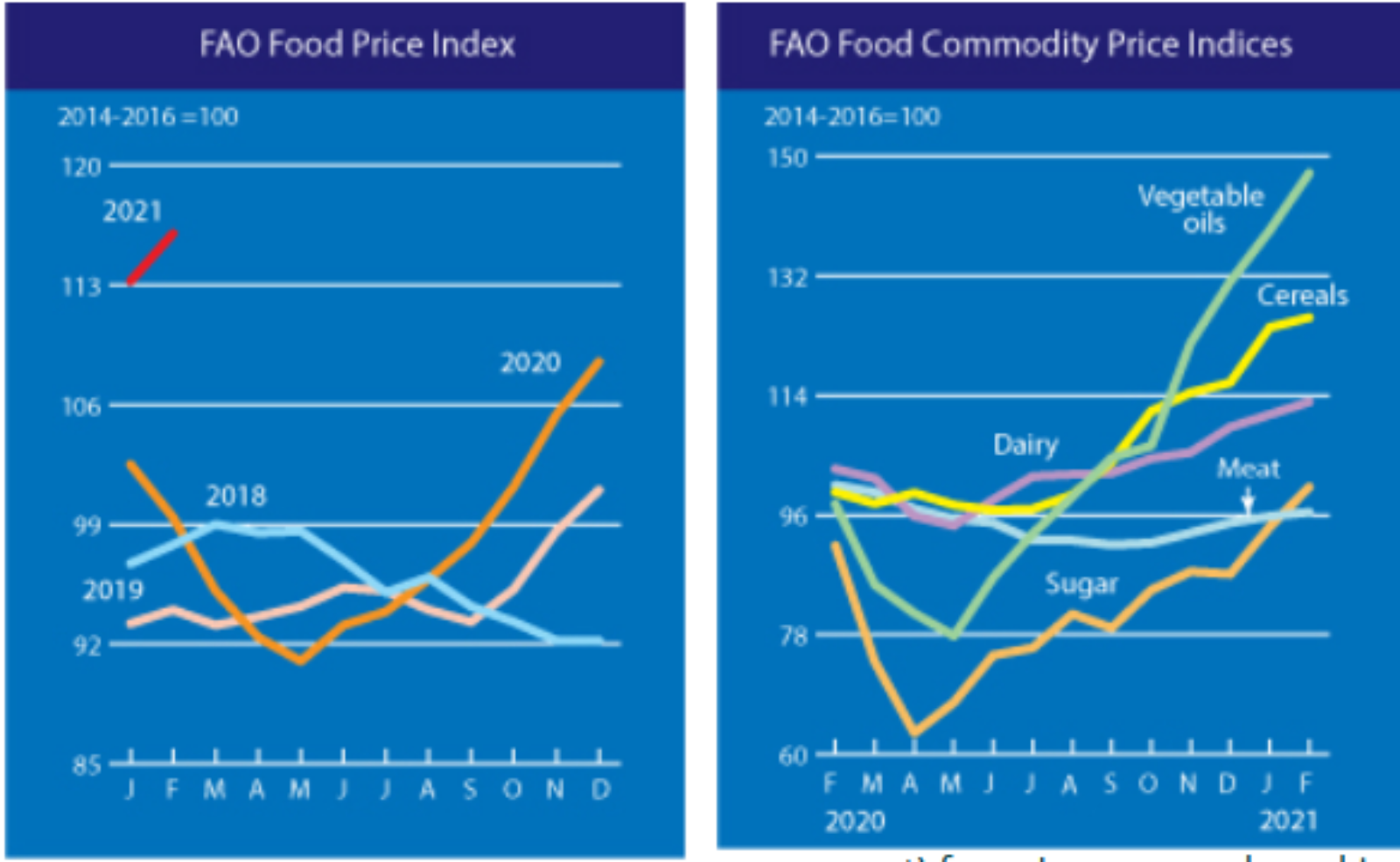 Global food prices rose for the ninth consecutive month in February, reaching their highest level since July 2014. Food prices increased by 26.5%, compared to the same time just last year. Pandemic-related disruptions to the food and agriculture industry — such as restrictions to global trading and economic distress — contributed to the lower supply of certain foods.

The FAO Food Price Index — which tracks changes in global food prices — found the biggest increase in the price of sugar — which is up 6.4%, “as production declines in key producing countries together with strong import demand from Asia prompted ongoing concerns over tighter global supplies.” Vegetable oil prices saw the second-highest hike in prices with a 6.2% increase, reflecting concerns about low production, inventory and export potential.

Food insecurity was growing prior to the pandemic, and estimates show that the virus could almost double the number of people experiencing hunger. International partners and governments are working together to monitor food supply chains and provide financial support for those who are unemployed and are unable to buy food.

By mid-April 2020, 94% of students worldwide were affected by COVID-19. In two surveys of more than 100 countries, online learning platforms were scored 58% fairly effective and 36% very effective. But lower-income households share a different experience: This group is more likely to express that remote learning has not been effective during the COVID-19 pandemic.

The pandemic has prompted educators and students to adapt to new learning methods and technology. But low-income households are less likely to have access to technologies that allow for a sufficient adaptation to remote learning. In response, some education companies are creating learning content that can be accessed on SD cards and 2G and 3G networks. One company distributes donated smart devices for free to children with limited or no access to online education.

Since reopening, some schools have adopted a hybrid approach to learning — a trend that may continue after the pandemic, as investments in some education technology companies reached into the billions in 2020.

How Can Leaders Maintain Employee Engagement in the Virtual Workforce?

COVID-19 has shown that 44% of workers are able to work remotely. But companies with remote workforces risk losing employee engagement in terms of “productivity declines, behavioral lapses and lower retention rates,” according to a report by Marsh McLennan Advantage. Interviews conducted with 50 senior executives across industries globally uncover four key imperatives for engaging employees in the new normal.

The first step is for leaders to listen to employees’ feedback and follow up with clear action plans. The second step is to communicate with employee-focused messages. When leaders understand the diverse workforce, they can speak authentically to employees’ needs and values. The third imperative is using technology that enhances the impacts of virtual communication, while also considering the security risks associated with technology. Finally, impactful employee communication requires the CEO, HR leaders and communication leaders to work together. The report notes that “bold measures designed to recharge employee engagement can deliver an energized, healthy, productive and committed workforce.”