How Has COVID-19 Impacted Voter Turnout in Elections This Year? 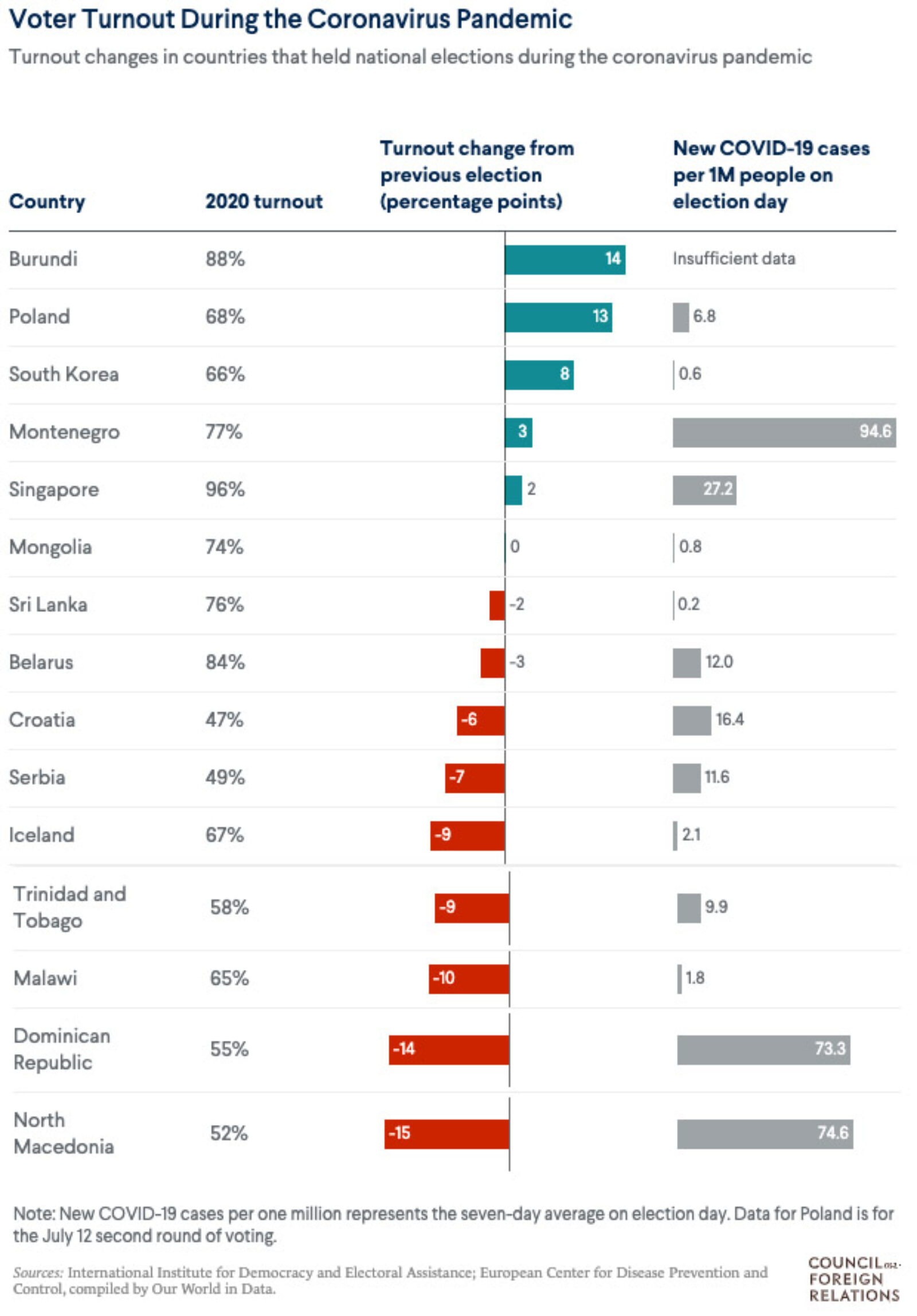 Around the world, countries are taking precautionary measures to make sure the COVID-19 pandemic does not affect voter turnout in elections. Earlier this year, the Dominican Republic and North Macedonia — each suffering from a high number of COVID-19 cases — both saw large drops in turnout from its previous election. In Burundi and South Korea, however, voter turnout increased, despite coronavirus-related concerns.

To combat the spread of COVID-19, many countries required mask usage in polling stations, checked voters’ temperatures, enforced social distancing and eliminated sharing materials. Other measures included staggering voter hours, providing alternative options to in-person voting and implementing special procedures for COVID-19 patients. However, most of these precautionary measures are expensive to implement, and countries have concerns about how to communicate such changes to voters.

Currently, more than 40 million ballots have already been cast in the upcoming United States presidential election. While the Pew Research Center found that the majority of registered voters are “very or somewhat confident that in-person voting places will be run safely, without spreading the coronavirus,” most states are currently seeing a sharp increase in cases.

More People and Assets Are Vulnerable to Sea Level Rise

Climate change has already caused sea levels to rise by 0.2 meters since 1900, according to the Intergovernmental Panel on Climate Change’s latest report. Temperatures will likely increase between 1.8 and 2.4 degrees Celsius by 2100 — not including higher levels of warming, according to an analysis of the outcomes of COP26.

Sea levels may further rise by up to 1 meter by the end of the century, depending on future emissions. Sea level rise is leading to coastal erosion and flooding, contamination of agricultural land and aquifers with saltwater and damage to ecosystems.

As the concentration of population and assets along coastlines continues to increase, sea level rise will disrupt economic activities and cause extensive damage to infrastructure. Without significant investments in climate change mitigation and adaptation, by the end of the century, the global population and assets threatened by coastal flooding will increase by 52% and 48%, respectively. 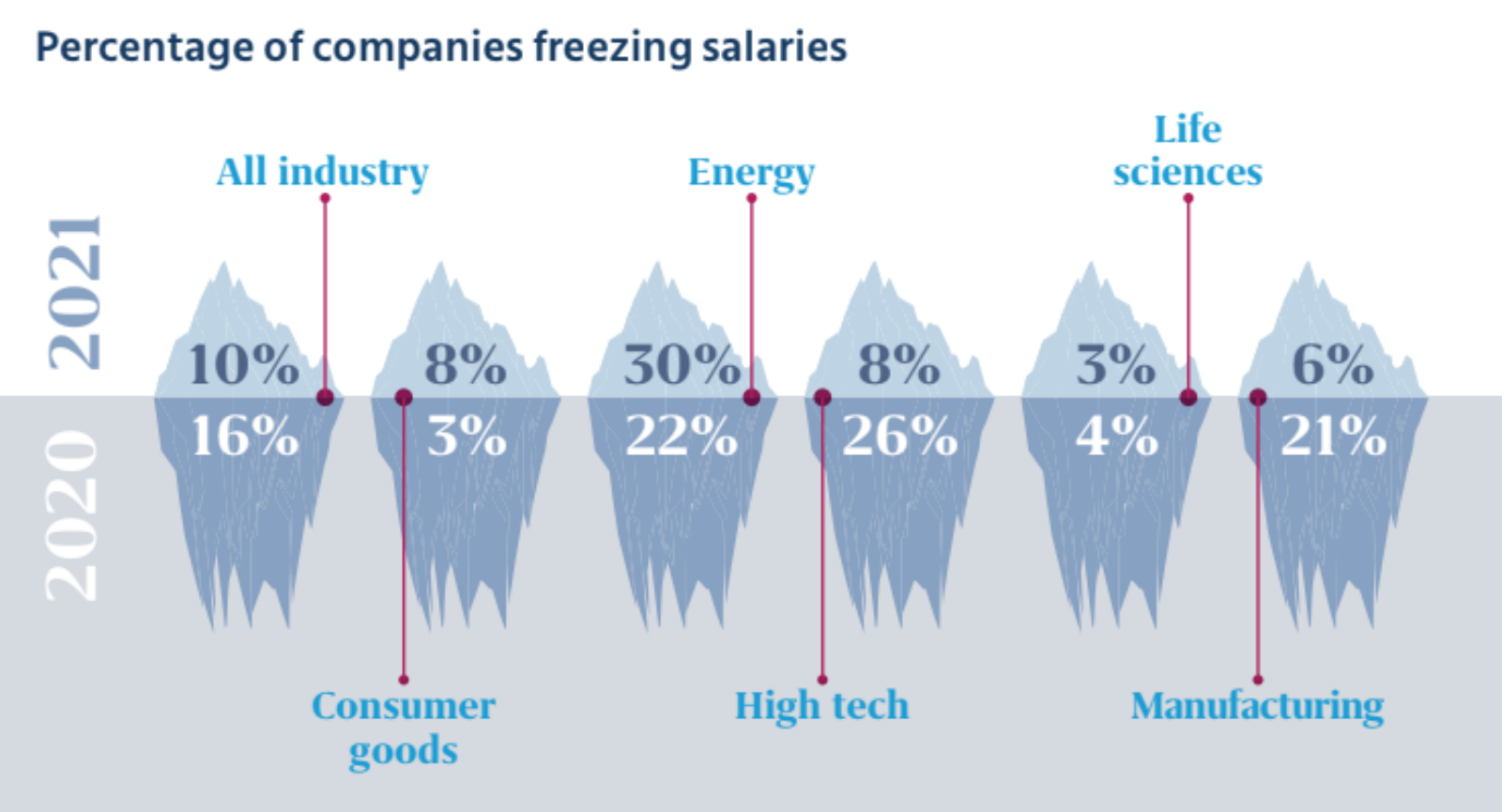 In 2020, as the COVID-19 pandemic spread, many companies instituted cost-cutting measures like salary freezes to curb potential negative financial impacts. But according to new data from Mercer, the general trend indicates that the percentage of freezes will decline in 2021.

This year, the total percentage of Western European companies freezing salaries has declined by 6%, with large salary freeze decreases in high tech (18% less in 2021) and manufacturing (15% less in 2021). In the life sciences sector — which includes pharmaceuticals, one of the key industries leading “return to normalcy” efforts throughout the pandemic — the proportion of companies instituting or continuing salary freezes is projected to dip even below 2020’s already-low rate.

Of course, companies worldwide are still adjusting as new variants, labor trends and market evolutions continue to foster an environment of uncertainty. For example, industries like consumer goods and energy — which are dealing with the dual challenge of the pandemic and climate change or inflation — are still instituting freezes at higher levels. 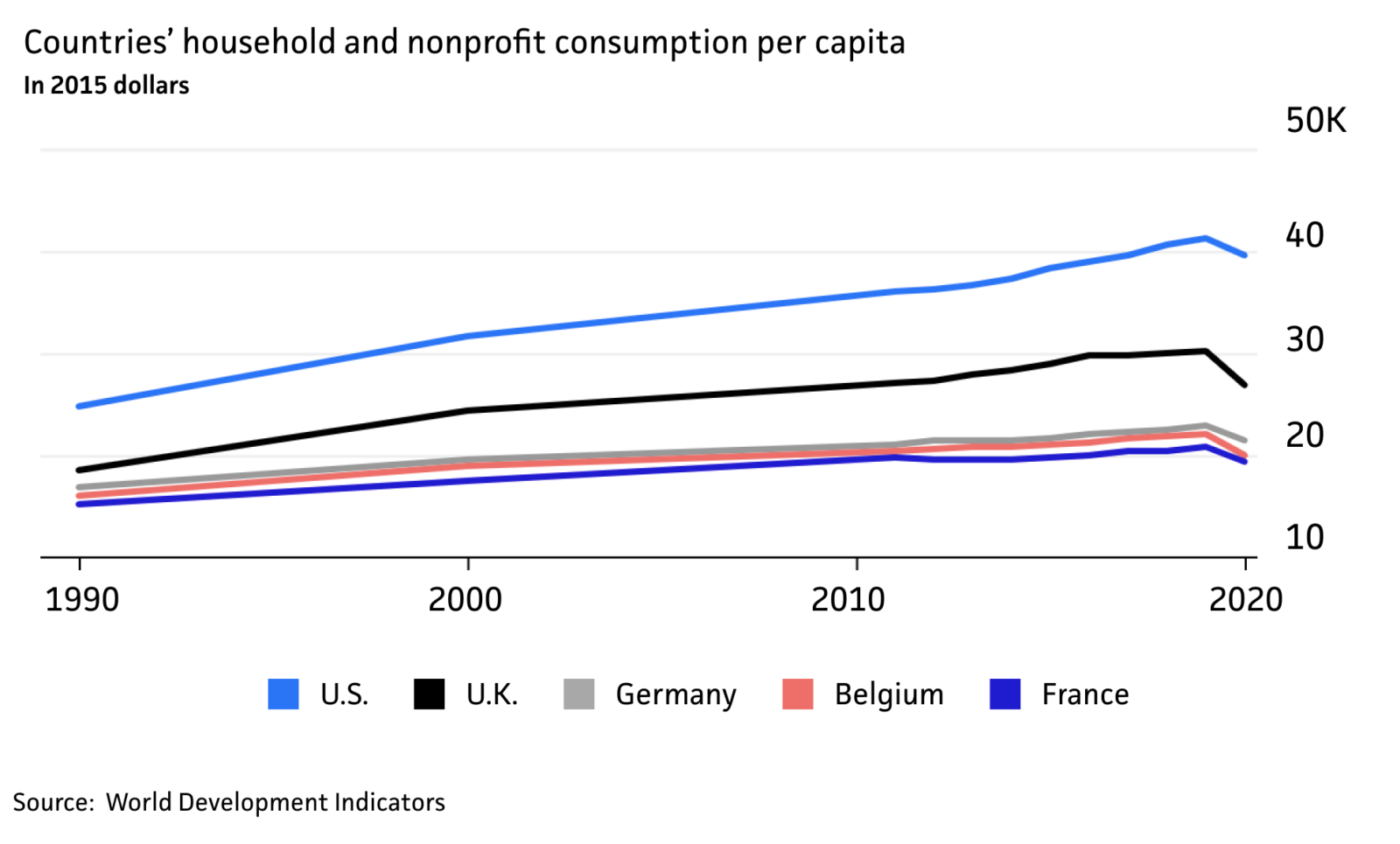 The United States leads the world in consumption per capita, according to a recent article by Bloomberg opinion columnist Allison Schrager. An average household consumed $43,500 in goods in 2020, accounting for 67% of the GDP. The number has grown 43% since 1990.

The rising trend in U.S. consumption, per the author, reflects the changing lifestyle that revolves around spending. Forty-three percent of American households own three T.V.’s, for instance, while clothing purchases have increased 500% since 1980. It also is a result of having more space to put things — the average U.S. home was 2,000 sq. ft. in 2015, compared to 1,700 sq. ft. in 1980.

Temperatures will rise between 1.8 and 2.4 degrees Celsius by 2100, according to a Climate Ambition Tracker analysis of the decarbonization commitments made by countries at the 2021 COP26, which does not rule out higher levels of warming.

In its latest report, the Intergovernmental Panel on Climate Change highlights how climate change is shifting global precipitation patterns: On average, wet regions are expected to become wetter and dry regions drier.

Extreme rainfall events are becoming more common, and flood risk is increasing. Climate change is also reducing water availability in many regions, exacerbating drought, wildfire and health risks. According to the World Health Organization, by as soon as 2025 half of the world’s population will be living in areas impacted by water scarcity. Changes in rainfall and rising temperatures will also compromise food security by reducing crop yields and livestock productivity.