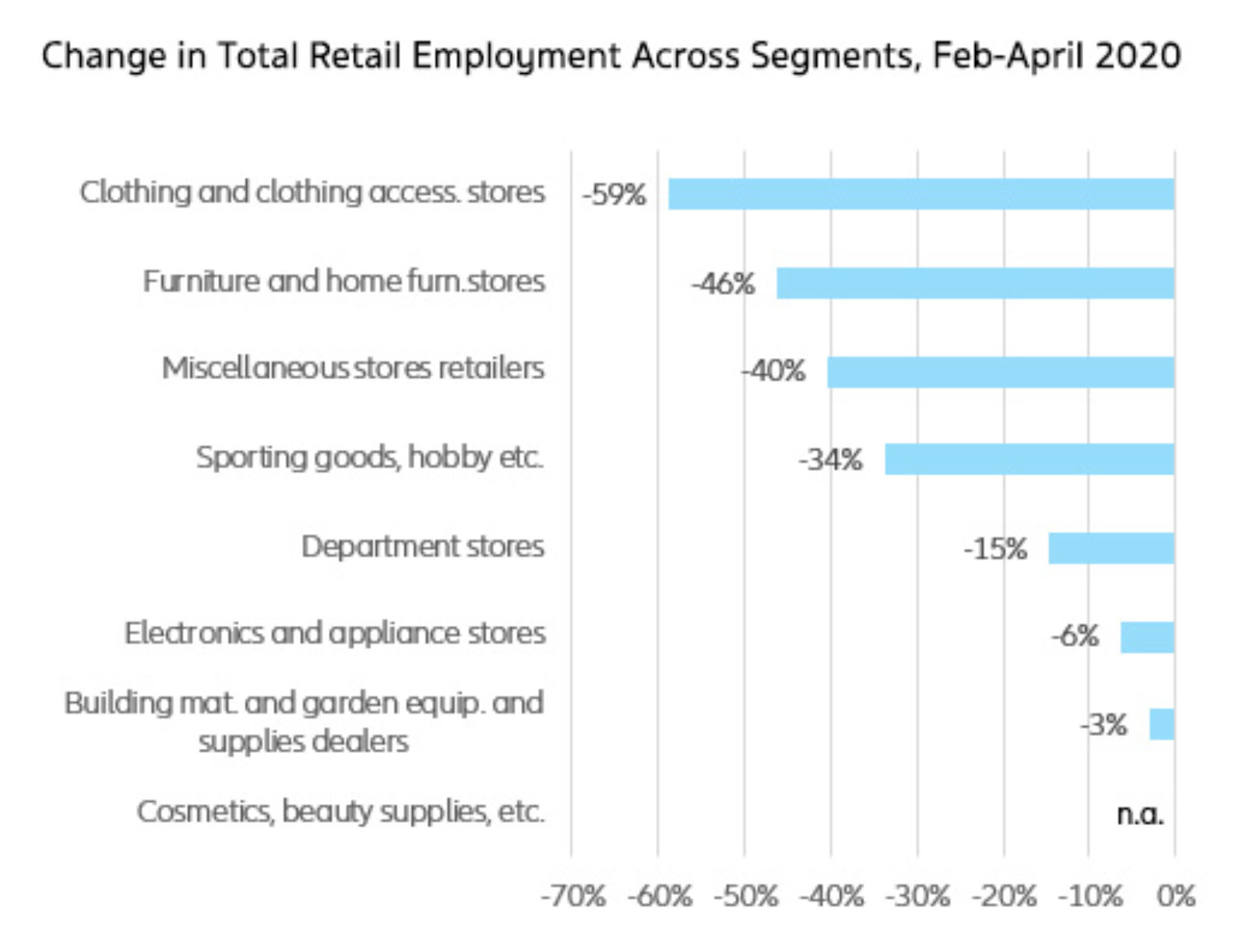 Retailers of nonessential goods are taking drastic measures to preserve liquidity and profit margins by cutting more than a million of the industry’s jobs in the U.S. There’s been a 59% drop in employment in clothing stores alone according to a Euler Hermes report.

1.7 million jobs were cut between February and April in the industry, and 30,000 to 50,000 stores could disappear by the end of 2021, the report says. Some companies are even deferring rent payments: In April, an estimated 20% to 40% of retail rent payments were made.

As retailers start to reopen, there will be intense price competition, the report says. “Purchased goods account for 60-70% of retail expenses,” and retailers will be eager to turn their inventory into cash.

Both the CARES Act and the Main Street Lending Program have provided financial relief in terms of bumping consumer spending and offering loan programs, and the National Retail Federation is negotiating additional measures to help save thousands of stores. 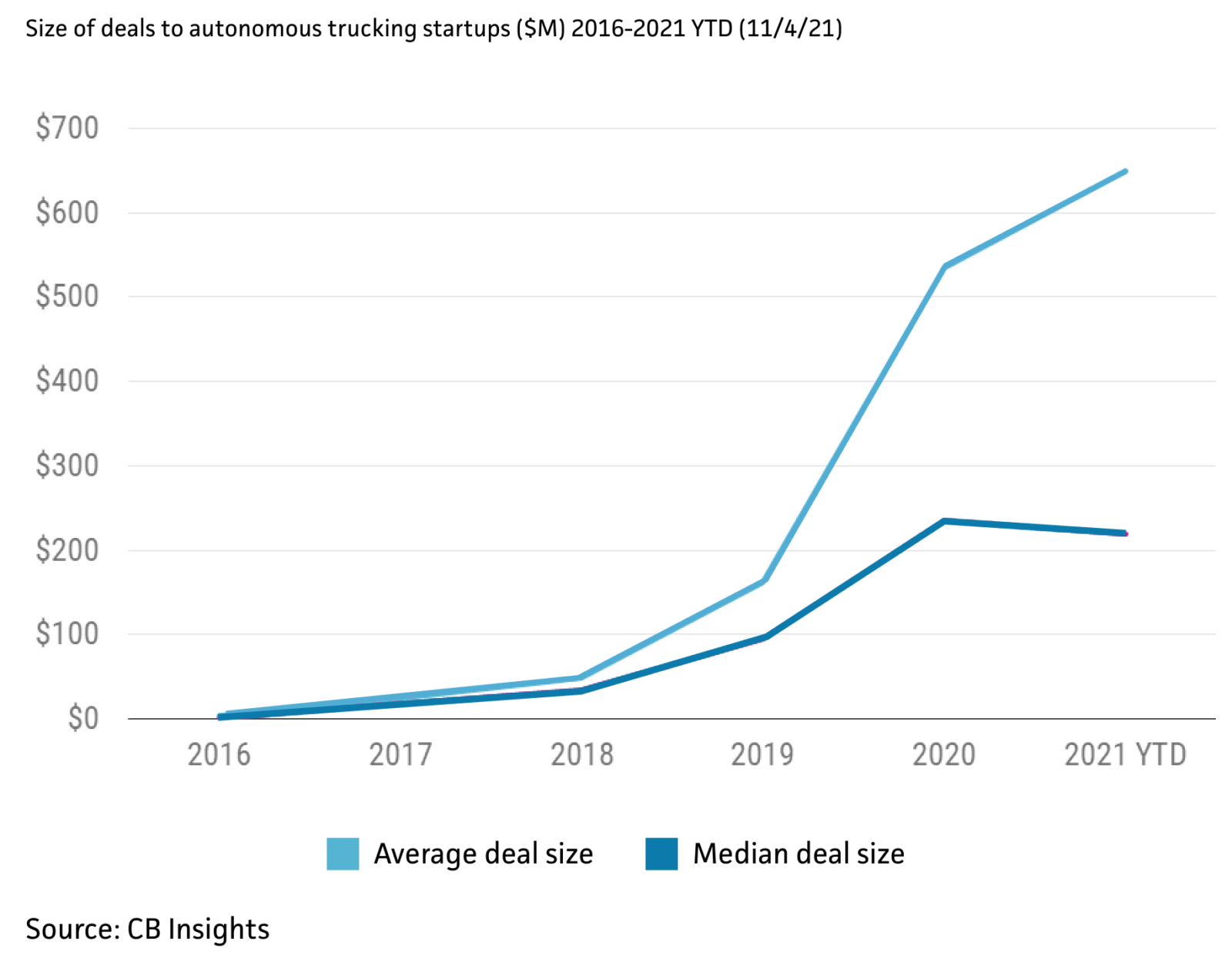 While autonomous cars have yet to make a significant impact in consumers’ lives, investors see an opportunity in the automated trucking industry. According to CB Insights, companies have raised an average of $650 million for 2021. These companies cover everything from the actual self-driving truck technology and logistics surrounding fleet coordination.

Waymo, the self-driving subsidiary of Alphabet, the parent company of Google, is the most well-funded company, with a total of $5.7 billion raised throughout its lifetime. It recently announced a partnership with UPS in piloting self-driving trucks in Texas, alleviating supply chain issues caused by the labor shortage.

Meanwhile, China-based Manbang Group focuses on freight matching — pairing cargo freight with drivers. It has raised a total of almost $3.7 billion. Previously, this was managed by brokers, but automation is increasingly taking the lead. Manbang uses its automation software to connect the 10 million verified truckers with 5 million cargo consignors on its platform.

There may be other surprising beneficiaries to autonomous trucking, as increased efficiency and lower operating costs could lead to higher congestion in urban centers — making rail a more appealing option.

During COP26, Glasgow Financial Alliance for Net Zero (GFANZ) announced that it now includes over 445 financial institutions in 45 countries. The alliance mobilizes more than $130 trillion in private capital. GFANZ was launched in April 2021 to accelerate decarbonization and limit global warming to 1.5 degrees Celsius, as indicated by the Paris Agreement.

Stopping climate change will require coordination across the financial system, and to achieve this goal, GFANZ brings together existing and new net-zero finance initiatives. Participating institutions are required to set science-based goals to reach net-zero emissions — including interim 2030 targets — and commit to transparent reporting in line with the criteria detailed by the United Nations Race to Zero.

As more firms in the financial sector align their lending, investing, asset management and underwriting practices with net-zero targets, companies can expect to face increasing pressure to decarbonize and disclose their emissions and climate risks.

The Global Cities Most At Risk of a Housing Bubble 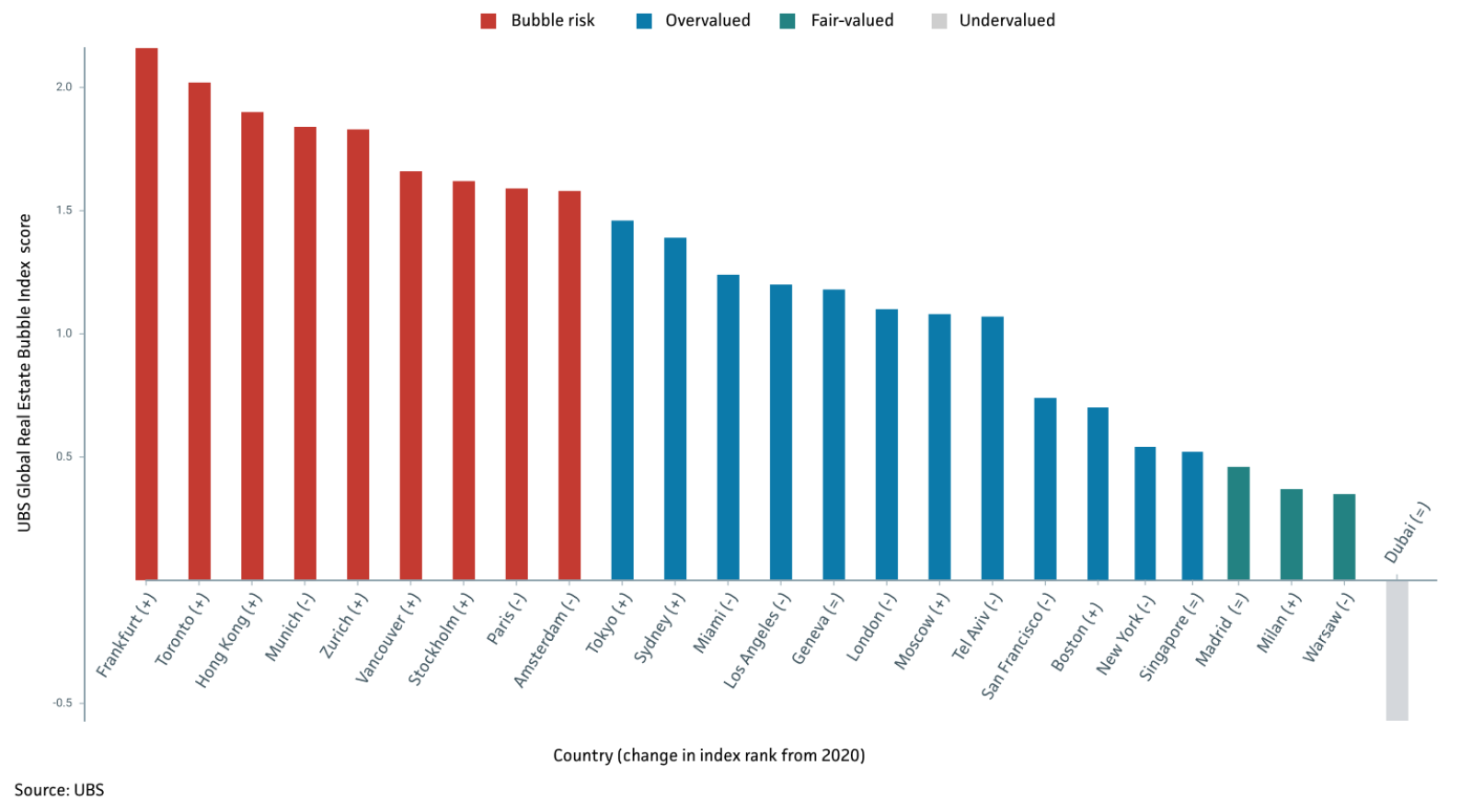 Frankfurt, Toronto and Hong Kong are the cities most at risk of a housing bubble, according to new research by Switzerland-based UBS. Its latest Global Real Estate Bubble Index found nine cities around the world that have a high index score. Meanwhile, Madrid, Milan and Warsaw are deemed to be cities with “fairly valued” housing, and Dubai has a negative index score, indicating that its housing is undervalued.

Overall, bubble risk has increased, along with the potential severity of a price correction, as a result of rising house prices across the world. UBS has found that growth in home prices increased 6% from mid-year 2020 to mid-year 2021 — the highest rate of growth since 2014.

To determine a city’s index score, UBS tracks whether a city shows symptoms of previous real estate bubbles, such as a decoupling of prices from local incomes and rents, and imbalances in the real economy, such as excessive lending and construction activity. In Frankfurt, for example, housing prices have increased steadily every year since 2016, in part due to a focus on building luxury housing, but the average price-to-income ratio has doubled in the last decade, leaving housing unaffordable for many. These trends point to a possible correction if the housing bubble were to burst.

Supporting US Airlines Could Recover 10% of GDP 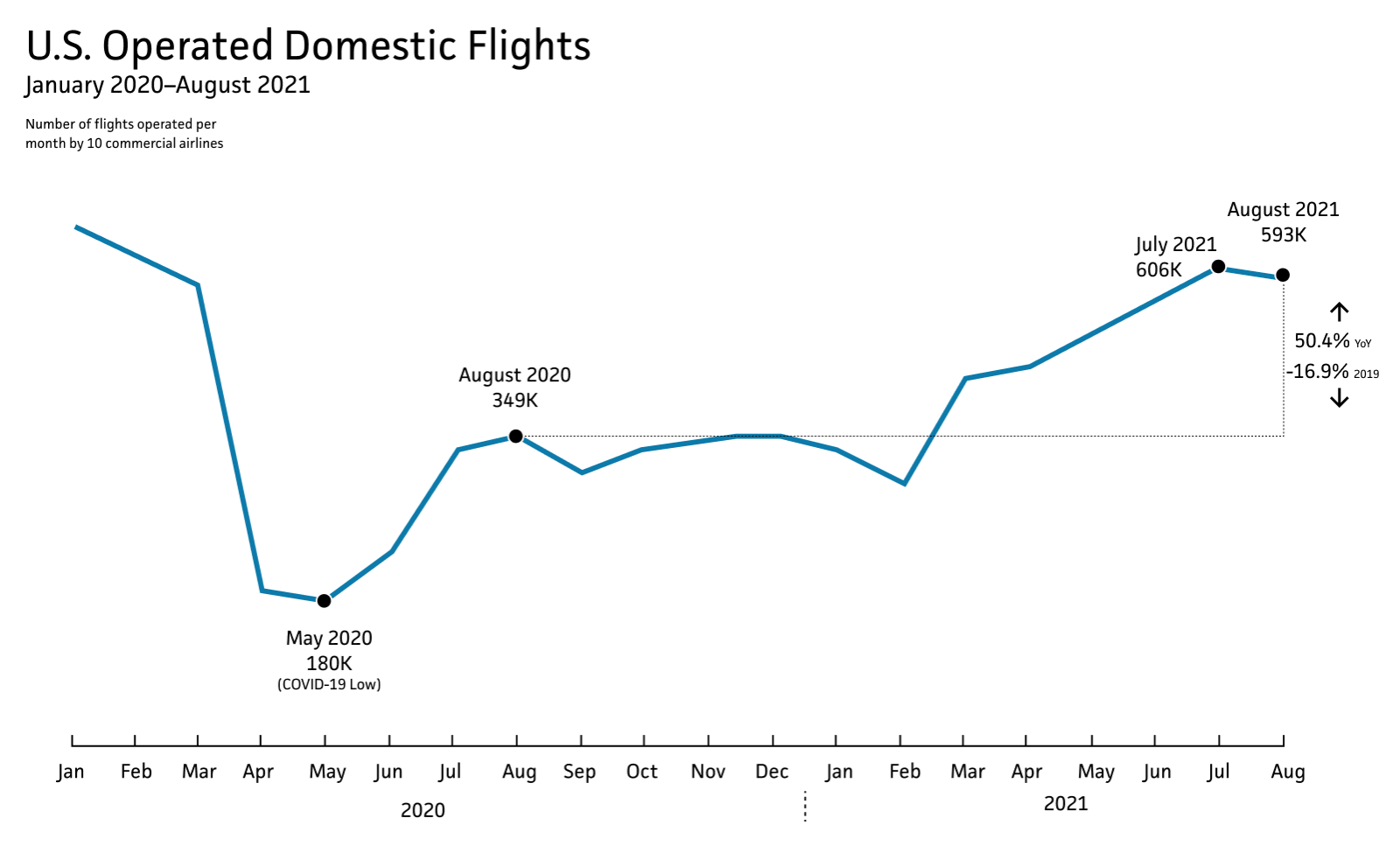 The U.S. aviation industry is seeing a moderate recovery from the pandemic, according to data from the U.S. Bureau of Transportation Statistics. August saw a total of 592,760 flights, 84.1% of the number from August 2019, continuing its strong performance from July.

Despite the recovery in total flights operated, pandemic concerns and international travel restrictions have kept capacity down. Analysis by Oliver Wyman shows that seat totals are still down from pre-pandemic levels. Capacity for the top 15 airlines is 12.8% below 2019 levels, meaning the industry expects significant losses in 2021 — $38.7 billion, according to the International Air Transport Association (IATA).

Airlines have survived on government support, according to IATA, and only have enough funds to stay afloat for around 8.5 months. Supporting airlines’ recovery “is one of the most important investments that governments can make. It will save jobs and kick-start the recovery in the travel and tourism sector which accounts for 10% of global GDP,” says IATA’s CEO, Alexandre de Juniac.