Vietnam Records Highest Growth in Asia So Far This Year 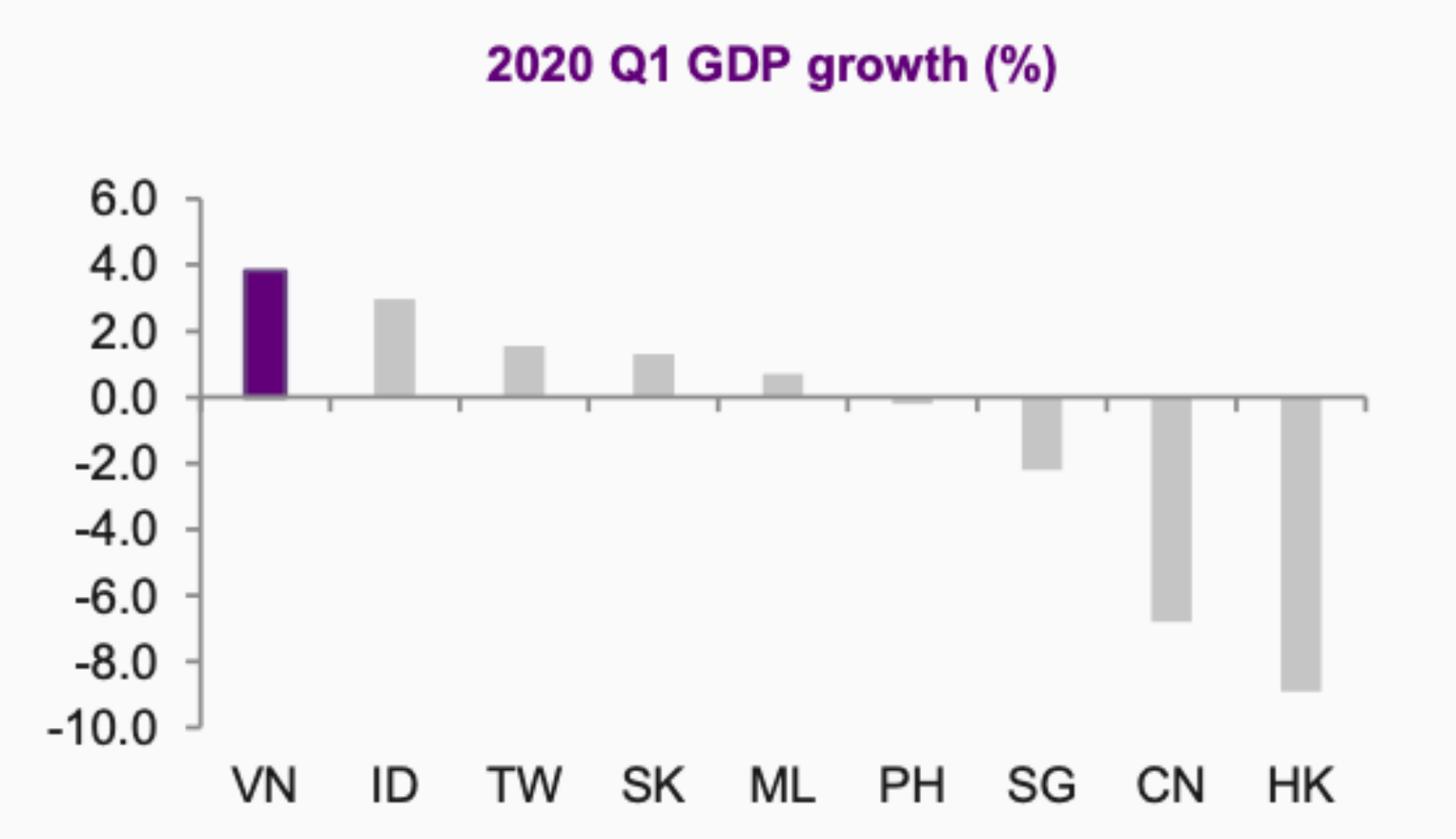 Vietnam GDP grew nearly 4% in Q1 2020 — representing the highest growth among all Asian countries. This is due in part to its swift response to the COVID-19 crisis and avoidance of a prolonged lockdown, according to a report from Natixis. Vietnam experienced zero reported deaths from COVID-19 and only minor supply chain disruption. The report’s authors even predict the country will be able to avoid a recession in 2020.

Although COVD-19 emphasized Vietnam’s resilience in a time of disruption, the country could encounter challenges in the long-term from its weak domestic capacity to access global value chains and its dependency on China to fuel its export operations, the report says.

However, the EU-Vietnam Free Trade Agreement (EVFTA), ratified in June 2020, represents a massive opportunity for Vietnam, with its exports to the EU growing 11% year-over-year, and will further boost the county’s presence as a leader among its Asian neighbors. The report’s authors expect this trade deal to secure Vietnam’s “status in Southeast Asia as a trade and investment friendly hub to the world.”

After more than two years of navigating different dimensions and phases of the COVID-19 crisis, concerns over the economy are the top priority for business leaders in G20 nations, according to the World Economic Forum’s 2022 Executive Opinion Survey (EOS).

Executives were asked to identify the risks they considered the biggest threats to their country over the next two years. As growth in many large economies stalls and households struggle to pay bills, economic risks clearly worry executives across G20 member countries. Risks such as “rapid and/or sustained inflation” appear in the top-five rankings for executives in almost all G20 countries, while “cost of living” is a similarly high-ranked concern for multiple members of the bloc. With more than 80% of the world’s GDP and 75% of international trade represented in the G20, the prioritization of economic risks in this year’s survey reflects a vulnerable outlook for the global economy.

Despite the overwhelming consensus on economic risks, business risk perception varies on other critical risks. For instance, responses from the emerging market bloc of the forum — for example, Indonesia and India — reflect strong concern over digital inequality, while geopolitical risks such as “interstate conflict” and “geo-economic confrontation” feature prominently in the top risks of advanced economies, particularly for leaders in the European Union. The upcoming Bali summit presents an important opportunity for the bloc to discuss a way forward on these varying priorities as well as common pressing economic challenges. 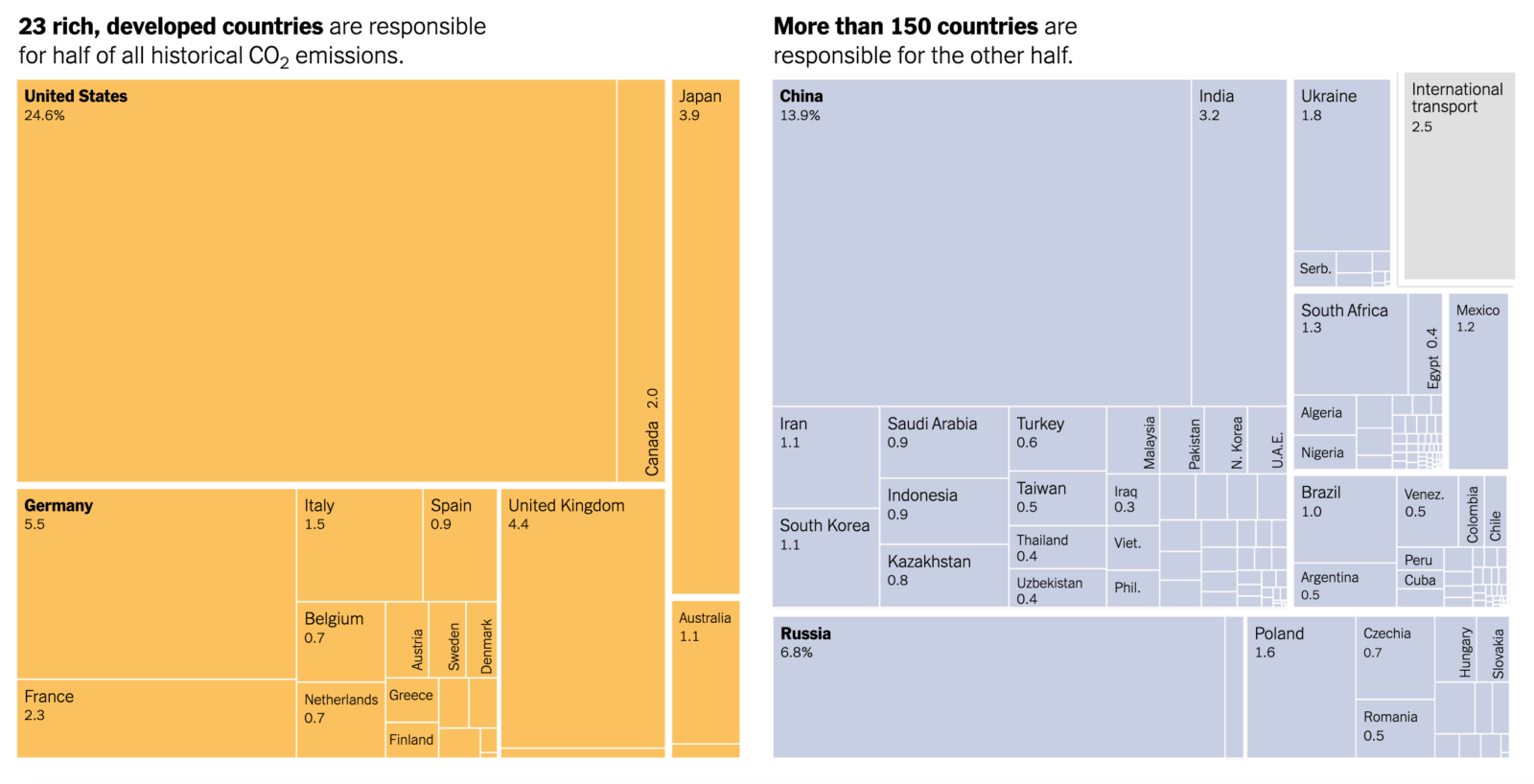 Note: The rich, developed countries group is based on the United Nations’ Annex II definition. International transport is not counted as part of either group’s total emissions. The data reflects territory-based carbon dioxide emissions from fossil fuels and cement, but does not include land-use and forestry. The graphic shows emissions from countries and territories.

Countries on the front lines of climate change are fighting for a “loss and damage” recovery fund at this week’s COP27 climate summit in Sharm el-Sheikh, Egypt, which would compensate them for natural disasters. Leaders from developing countries that have been the worst impacted by global warming, while contributing the least emissions — including Pakistan, Egypt, and Barbados — are asking developed, high-emissions countries to pay for their climate damages. In response, leaders from Austria, Ireland, Scotland, Germany, Belgium, and Denmark pledged millions of dollars in funding.

The debate over who will pay the skyrocketing bill for climate damages isn’t new — the idea was first proposed in 1991, by Pacific island nation Vanuatu. But this is the first year the issue has been put on the official COP agenda. That may be because of the rising amount of research quantifying who is responsible for climate change. That includes data showing that 23 rich countries are responsible for 50% of all carbon dioxide emissions since 1850 (vs. the 150 countries responsible for the other half). Studies also model how climate-related deaths will increase more rapidly in poorer countries than wealthier ones.

The issue has become a matter of urgency: on the first day of the summit, the World Meteorological Organization reported that the last eight years are on track to be the hottest ever recorded. 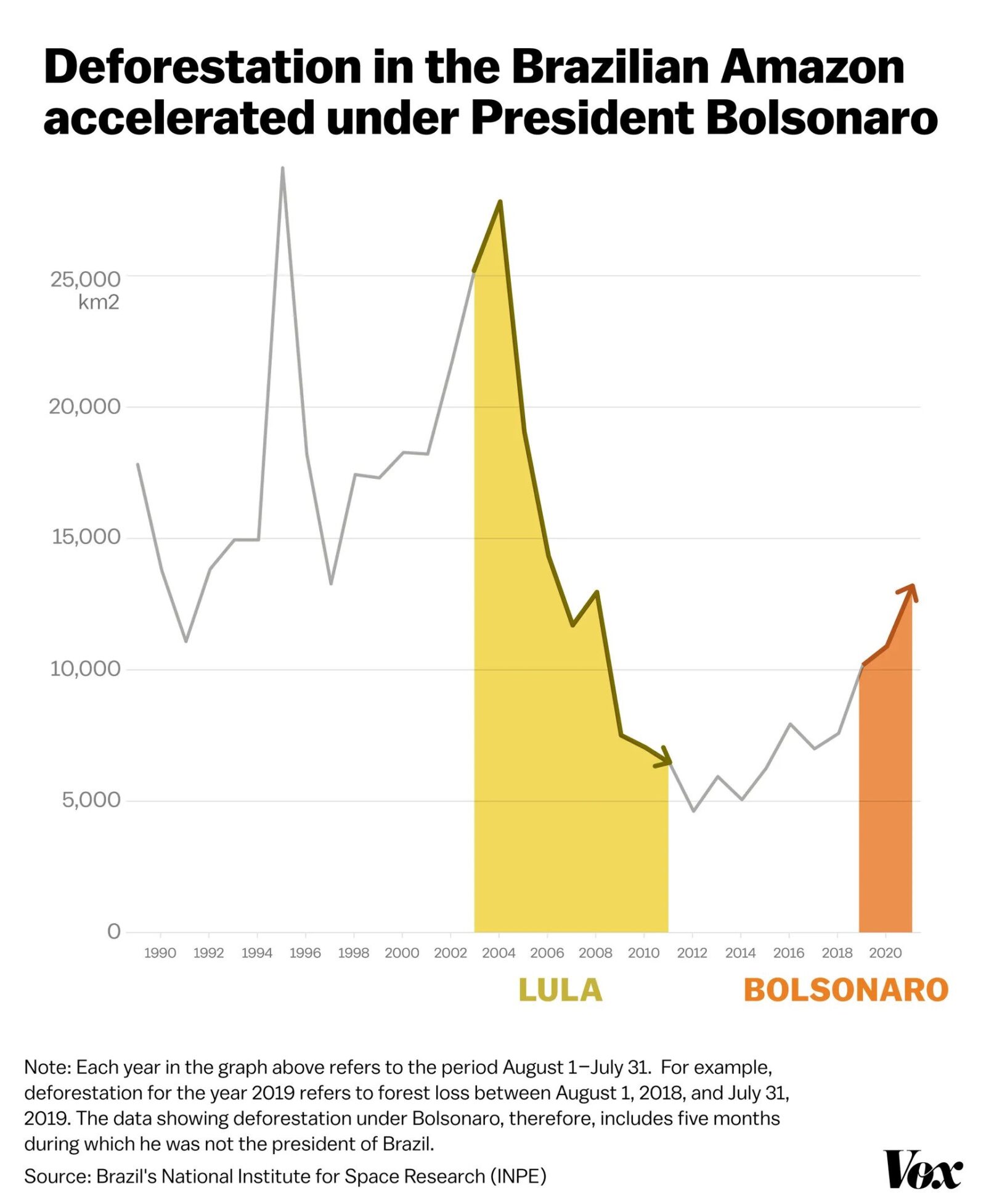 The gap from 2011 to 2019 in the above graph represents former Presidents Dilma Rousseff and Michel Temer's terms.

Luiz Inácio Lula da Silva’s victory over incumbent President Jair Bolsonaro in Brazil’s presidential runoff election may have a huge impact on saving the Amazon rainforest. The Amazon, the largest rainforest on Earth and an important carbon sink, has lost 17% of its area to deforestation since the 1970s. More than half of the Amazon (60%) is in Brazil, causing some environmental advocates to say Brazil’s election marks a turning point for the rainforest.

Under Jair Bolsonaro’s presidential term, environmental protections were weakened while activities like illegal mining and man-made fires increased. Between 2019 and 2021, the Amazon lost more than 34,000 square km (8.4 million acres) — an area larger than Belgium. The loss was a 52% increase over the amount of deforestation three years prior.

How the Pound Is Holding Up to the Dollar 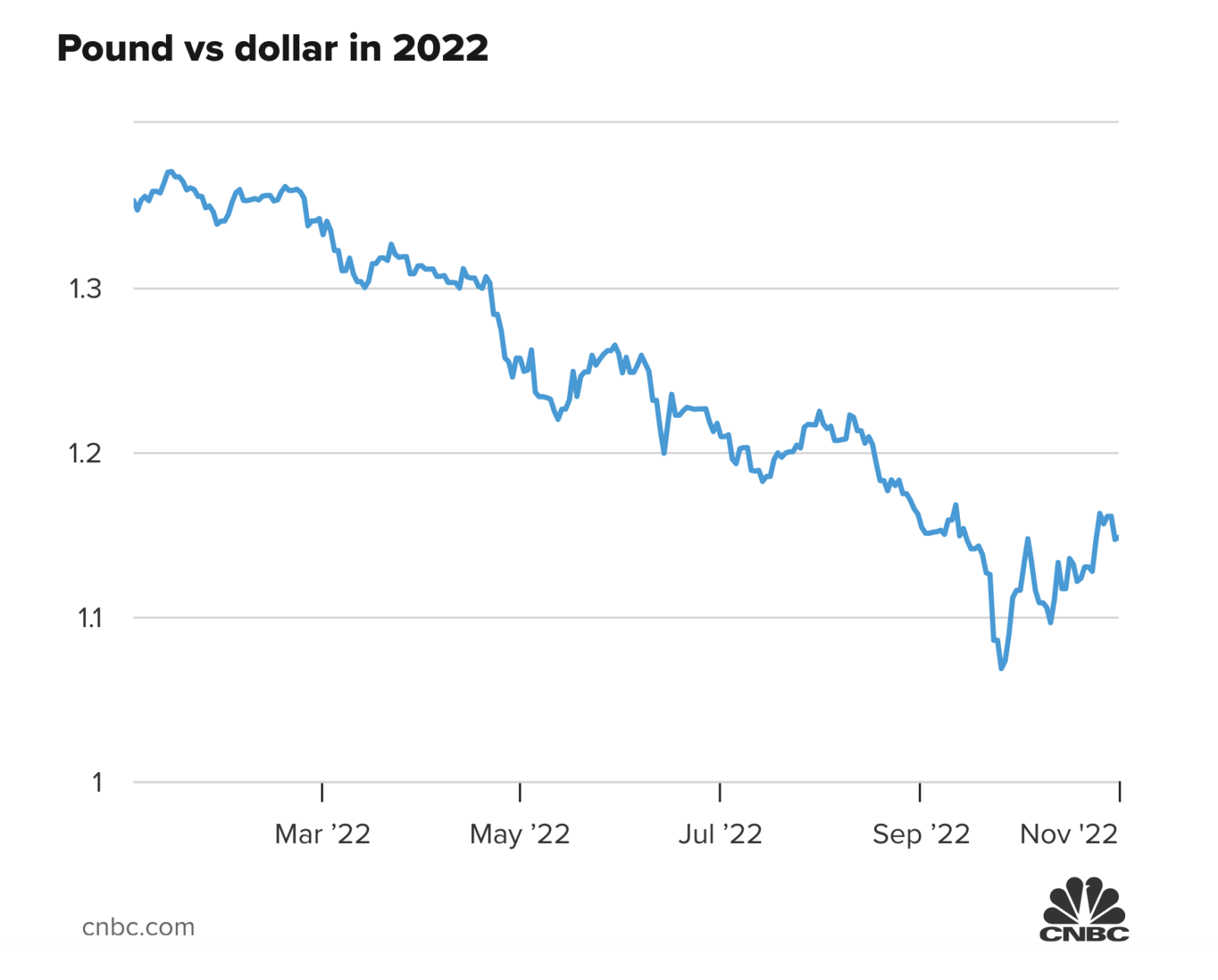 The British pound sank further against the U.S. dollar last week after the Bank of England said it expects the U.K. to fall into a two-year recession — in what would be the longest recession ever recorded. The BoE raised interest rates to 3% from 2.25%, its largest hike in over three decades, in an effort to fight inflation.

The pound has fallen steeply against the dollar over the past few months as financial markets reacted to the turmoil in British politics, including former Prime Minister Liz Truss’ proposed economic policies. It reached a record low against the dollar in September, at $1.03. Inflation rose above 10% the same month, contributing to a growing cost-of-living crisis. The weakened pound is compounding the burden on British households by increasing the already high price of imported goods like food and gas.

In addition to the pound, most major currencies have lost their value against the dollar this year — a result of the Federal Reserve’s aggressive interest rate hikes. As the dollar’s value rose nearly 20% in 2022, the Chinese yuan, euro, and Japanese yen all reached new lows. The pound and the euro rose this week against the dollar as the euro zone grew in the the third quarter and investors anticipated China easing its COVID-19 restrictions.