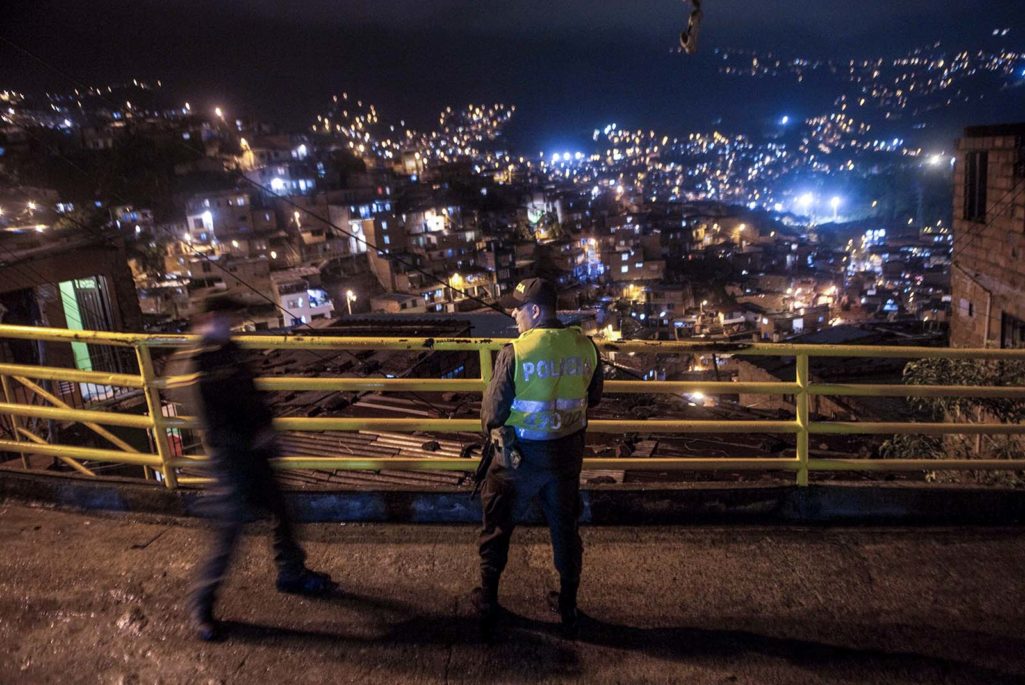 Colombian soldiers patrol at the Commune 13—one of the shantytowns with the highest rates of urban violence—on March 20, 2013, in Medellin. Despite the rise in violence that year, since 1991 Medellín has cut its murder rate by twentyfold, from the days when drug lord Pablo Escobar ruled over the city and it experienced 6,000 murders a year.

The security of today’s rapidly growing cities is a central challenge for policymakers, urban planners and law enforcement across the globe, according to a recent report.

Half the world’s population already lives in urban areas; by 2050 66 percent of the world will live in cities, putting a strain on all manner of resources, not the least of which is security.

The interconnectedness of cities, via their inhabitants—physically and electronically—“leads to ripple effects: what happens in one locale can quickly affect a distant locale too,” says the report, Securing Global Cities: Best Practices, Innovation, and the Path Ahead, a joint project from the Brookings Institution and JPMorgan Chase.

The increased mobility and new opportunities afforded by today’s modern cities “also create vulnerabilities,” the report says. Cities around the world “find themselves at the nexus of society’s most pressing issues, including terrorism, transnational violence, civil and ethnic unrest, organized crime, and technology-based crime, such as cyber threats,” the report says.

Security in its own right, for individuals, communities, businesses, infrastructure and institutions in urban areas is paramount, but it’s also a fundamental underpinning of economic growth and sustainability. And while some locations can advance economically, even in the face of sustained violence, “it is difficult to entice investors, inspire innovators, and keep mobile workforces content without a basic degree of safety,” the report says.

The report notes six major areas that need continued attention in order to secure cities and cultivate an environment where commerce can thrive. The core of any successful security strategy begins with its citizens, and at the heart of that strategy is community policing.

Reductions in urban-based crime across the globe can be linked to active community policing efforts, the report says. It’s also needed to fight transnational crime and terrorism “largely for the intelligence it can provide when communities feel engaged in helping ensure their own safety,” the report says.

The report lists several methods that make up a successful community policing strategy, such as: decentralized organization of police with delegation of authority; stable assignments of officers in certain beats and neighborhoods to foster relationships and communications; an emphasis on crime prevention rather than response; analytics designed to identify and highlight patterns of crime, allowing for targeted strategies at the local level to address high-risk areas; and encouragement of assistance from the broader community—including local businesses—in identifying dangers as well as solutions to crime. “Ultimately, community policing and related activities need to shore up the rule of law and citizen security as preeminent concerns,” the report says.

Security can’t happen in a vacuum; a spirit of collaboration must exist to share intelligence and fight cross-jurisdictional threats, particularly when it comes to terrorism.

This means police forces working in tandem with national security and intelligence forces. Coordinating which agencies take the lead roles in investigations, which ones carve out the surveillance role and which ones are responsible for making any needed arrests is vitally needed. Hurdles such as providing appropriate police officers with security clearances need to be addressed, too. Information sharing—long an impediment to security collaboration—needs to be streamlined and seamless.

Targeting the “worst of the worst” violent criminal cartels should be a priority, as it serves as a deterrence for other like-minded groups.

Another key decision is whether to target just the leadership of these criminal organizations “or instead to develop a more patient strategy emphasizing action against mid-level operatives,” the report says. “Evidence suggests that the latter approach is usually more effective.”

Although taking out the head of large criminal networks has undoubtedly proven effective in some instances, such as it was in targeting Pablo Escobar in Columbia, it’s “generally important to extend targeting down a layer or two in an organization,” the report says.

The use of technology always comes with a tradeoff between security and personal privacy. And where technology is routinely enhancing the quality and security of citizens, it’s also aiding criminal efforts. Today’s police forces need to avail themselves of technology, too, in an effort to keep pace with the escalating use of technology by criminal organizations.

The report notes that “helpful technologies” exist today that include: inexpensive closed-circuit TV, facial recognition technology, license-plate readers, smart phones and GPS trackers for police cars, acoustic gunshot detection systems and other advanced sensors, and drones. However, technology is no substitute for cops on the beat: “We found no examples of cities that were successful in fighting crime and terrorism unless they simultaneously maintained or increased police personnel and focused intensively on the quality and training of those personnel,” the report says.

Social cohesion must be a central element in the strategy to combat crime, not an afterthought, the report says.

“The neighborhoods and demographic groups most affected by crime and violence must be treated as essential allies,” the report says. “Moreover, education and employment opportunities must be expanded in urban areas suffering from lack of opportunity and hope in order to address the root causes of crime.”

The report notes that cities are developing a host of creative ideas to improve social cohesion, for example: using fire departments or national army outreach efforts in places where police departments may not be easily trusted; engaging formerly incarcerated individuals or rehabilitated former members of violent gangs or groups to reach out to disenfranchised communities.

How to deal with the unthinkable or the so-called “black swan” event? It’s crucial to draw up contingency plans for such one-off catastrophic events, the report says. Such events could be “complex emergencies that superimpose themselves upon, or help to create, violent or anarchic security conditions,” the report says.

With the rise of today’s megacities, black swan events could “easily affect 10 times as many people in a single incident as have been directly threatened by the world’s 21st century natural catastrophes to date,” the report warns.

Andrew Yeo Senior Fellow and SK-Korea Foundation Chair in Korea Studies at Brookings Institution’s Center for East Asia Policy Studies
URL: https://www.brinknews.com/securing-the-future-of-tomorrows-cities-today/
Get ahead in a rapidly changing world. Sign up for our daily newsletter. Subscribe
​​