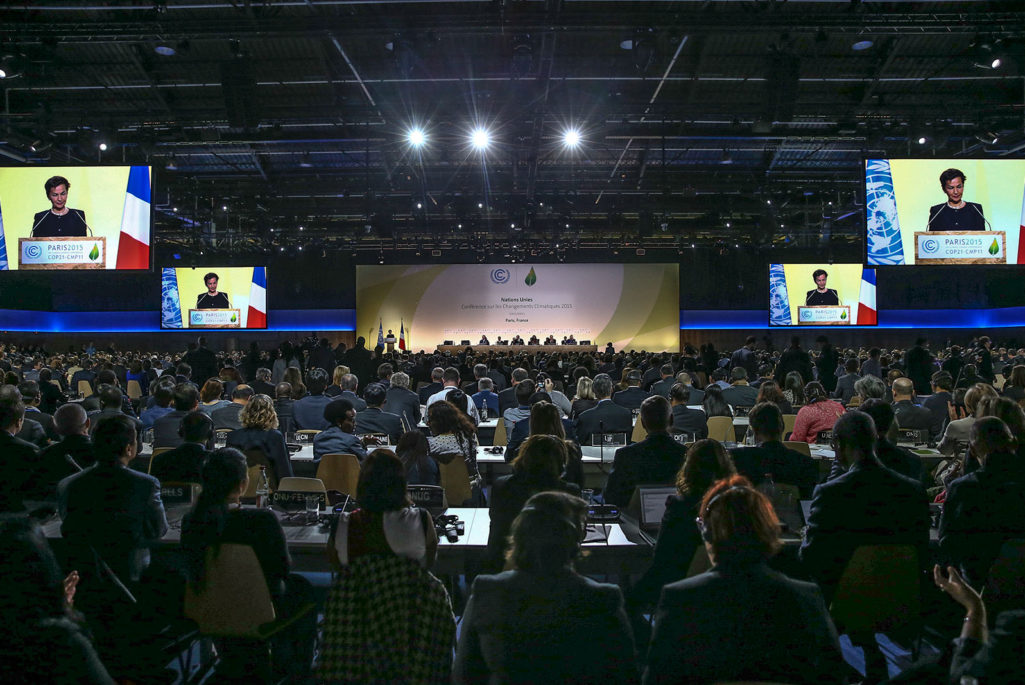 Christiana Figueres, the executive secretary of the UN Framework Convention on Climate Change, speaks during the opening session of the COP21 climate talks in Paris, France. Political leaders from 147 countries will address the conference and the summit will see negotiators from 195 countries try to finalize a new climate treaty over the next two weeks.

While the science of climate change is a given for participants at the COP21 meetings in Paris, the science of decision-making around adaptation and mitigation measures is very much under discussion.

How one factors in thinking that addresses pressure to meet short-term goals against the need for long-term, sustainable solutions is the crux of a four-year effort of the Fifth Assessment report of Intergovernmental Panel on Climate Change (IPCC). The report contains a comprehensive study of scientific knowledge on climate change, focusing on its implications for sustainable development. It also assesses strategies that address obstacles to undertaking deliberative thinking in making polices to address climate change.

BRINK talked to Howard Kunreuther, co-director of the Wharton Risk Management and Decision Processes Center and a coordinating lead author of the chapter on Integrated Risk and Uncertainty Assessment of Climate Change Response Policies in the recent IPCC report, to hear his views on the challenges of communicating risk around climate change and what lies ahead for those hoping to negotiate agreements coming out of COP21.

BRINK: When it comes to discussing risks around climate change, what’s going to be the biggest challenge facing negotiators during COP21?

Howard Kunreuther: I think one of the biggest challenges is to get everyone thinking about developing long-term strategies for dealing with climate change, given the fact that we are all very focused on the short term. The challenge is to find a way to deal with current problems while still keeping in mind what this is going to do in the long term.

BRINK: How do we tend to think about risks such as climate change, that is to say, risks that have a high degree of uncertainty around them?

HK: When we think about climate change, there is a tendency to say to oneself, “I don’t have to worry about it today,” or “It may happen to others rather than us.” There is a lot of research highlighting this point. Furthermore, when there’s uncertainty, you can find your favorite expert who can actually defend your position. There is enough uncertainty about the nature and impacts of climate change over the next 20 or 50 years that makes for a real challenge with respect to getting any kind of consensus on how to deal with climate change now. Myopia is really an important component to this, with the idea of saying, “Well, I have a lot of other short-run problems that need my immediate attention; I really don’t want to take steps now to deal with this longer-term issue.”

BRINK: How do we overcome that?

HK: I think that one of the real challenges here is with respect to risk communication and the perception of risk. In writing about this for the IPCC report, we used the framework from Daniel Kahneman’s book, Thinking Fast and Slow, that reflects work that psychology and other social sciences have been dealing with over the last 30 years.

That framework highlights the challenges of linking intuitive thinking with deliberative thinking.

Intuitive thinking is short-term thinking based on emotions and past experience. We do very well when we have a lot of past experience, but do very poorly when it comes to issues like climate change. Deliberative thinking is a more systematic analysis where you can use techniques such as benefit-cost analysis, looking at trade-offs, but most important, thinking about the long-term aspects and the interconnectedness of the world, which, of course, is a part of climate change.

If we are going to develop long-term strategies that reflect deliberative thinking, then we have to address the intuitive part of our decision-making process, which is often short-run oriented, in constructing long-term strategies. We need to bring those two components together— to focus on the perception of risk coupled with a more systematic analysis in developing policies for addressing climate change.

When people perceive a risk, they tend not to make the decisions in the way that experts do.

BRINK: Let’s go to that question of perception for a moment. The chapter reads: “People frequently perceive risk in ways that differ from expert judgments posing challenges for risk communication and response.” Can you talk a little bit about that?

HK: The chapter has a section on the importance of using expert judgments, and makes the point that when people perceive a risk, they tend not to make the decisions in the way that experts do. People often focus on a salient event, a tendency known as the “availability bias,” which basically means that often, only after one experiences a low-probability risk event is one willing to take action to reduce the risk. When you don’t experience the event, there is a tendency to think, “It will not happen to me.” That type of thinking is coupled with using a simplified decision rule such as, “This is below my threshold level of concern; I’m not going to worry about it.”

When you have that combination of thinking, it’s a recipe for disaster in the sense that you won’t take the steps to protect yourself beforehand or take steps to reduce global warming and its impacts because nothing serious has happened yet. For example, people tend to buy insurance only after a disaster occurs. They’ll buy flood insurance after they’ve experienced flooding, but not before. In addition, homeowners in flood-prone areas often don’t want to incur the costs associated with undertaking these measures because they don’t feel that the benefits in the form of lower insurance premiums over the next several years justify the upfront expense. So myopia comes into play as well. When you have that combination, you really have to work hard to think about, “How do we get people to pay attention to climate change now when they’re perceiving the risk as unimportant?”

BRINK: What’s the particular challenge the developing countries are facing?

HK: The biggest challenge for the developing countries is that they have short-run goals that often conflict with the longer-term strategies that climate change may raise. There has been a reluctance on the part of these countries to adopt strategies related to the reduction of carbon simply because it would be more efficient and less expensive for them to continue with coal. There is now an understanding by many of these countries that they have to play a more important role in the long term. China and India are two examples of countries that are now reflecting on climate change in a different way than they did a few years ago.

BRINK: What does this research tell us about how to improve decision-making around such uncertain and global risks?

HK: I think that the biggest challenge is how to create economic incentives to address the short-run concerns that countries will have. Another challenge relates to uncertainty, not just with respect to climate change itself, but also with respect to market behavior and regulatory actions that countries actually may have in place. In making planning decisions, firms and individuals want to be assured that government policies are not going to change overnight. Programs that give individuals and firms some degree of confidence that they will be able to benefit in the long term would be very helpful.

BRINK: How are mitigation and adaptation decisions shaped by existing economic and political institutional arrangements?

HK: Investing in energy-efficient technologies such as solar and wind is a step toward reducing carbon emissions. It is a mitigation measure for a country and for the world, and it’s an adaptation measure for an individual or firm because they are likely to reduce their energy-related costs.

BRINK: How do you deal with the unknown of how cultural differences, values and needs plays into a global discussion on trying to reach an accord on climate change?

HK: That’s a great question and not one that can easily be answered. One needs to appreciate that there will be cultural differences between countries, and to realize there are issues that are of concern to developing countries that differ from those of importance to developed countries. Developing countries may blame the developed countries for a lot of the climate change problems we have today, and that has to be appreciated if you’re going to have a negotiated agreement. If one doesn’t acknowledge at the outset that there are these different values and goals, it’s going to be very hard to come up with an agreement that will actually satisfy all the parties at the table.

Institutional arrangements across countries may also differ widely. Consider insurance as an example. Insurance is well-established in the developed countries, but it isn’t utilized by most developing countries. If you want to consider using insurance as a policy tool, one has to be very careful in asking how to deal with countries that haven’t really focused on this policy instrument. Propose alternative programs that could complement their current institutional arrangements. Rather than saying we’re going to have to change the country, one should focus on modifying the current arrangements to better address climate change.

Natalie Stewart Senior Associate at Duane Morris
URL: https://www.brinknews.com/short-term-thinking-without-long-term-focus-could-hamper-climate-talks/
Get ahead in a rapidly changing world. Sign up for our daily newsletter. Subscribe
​​