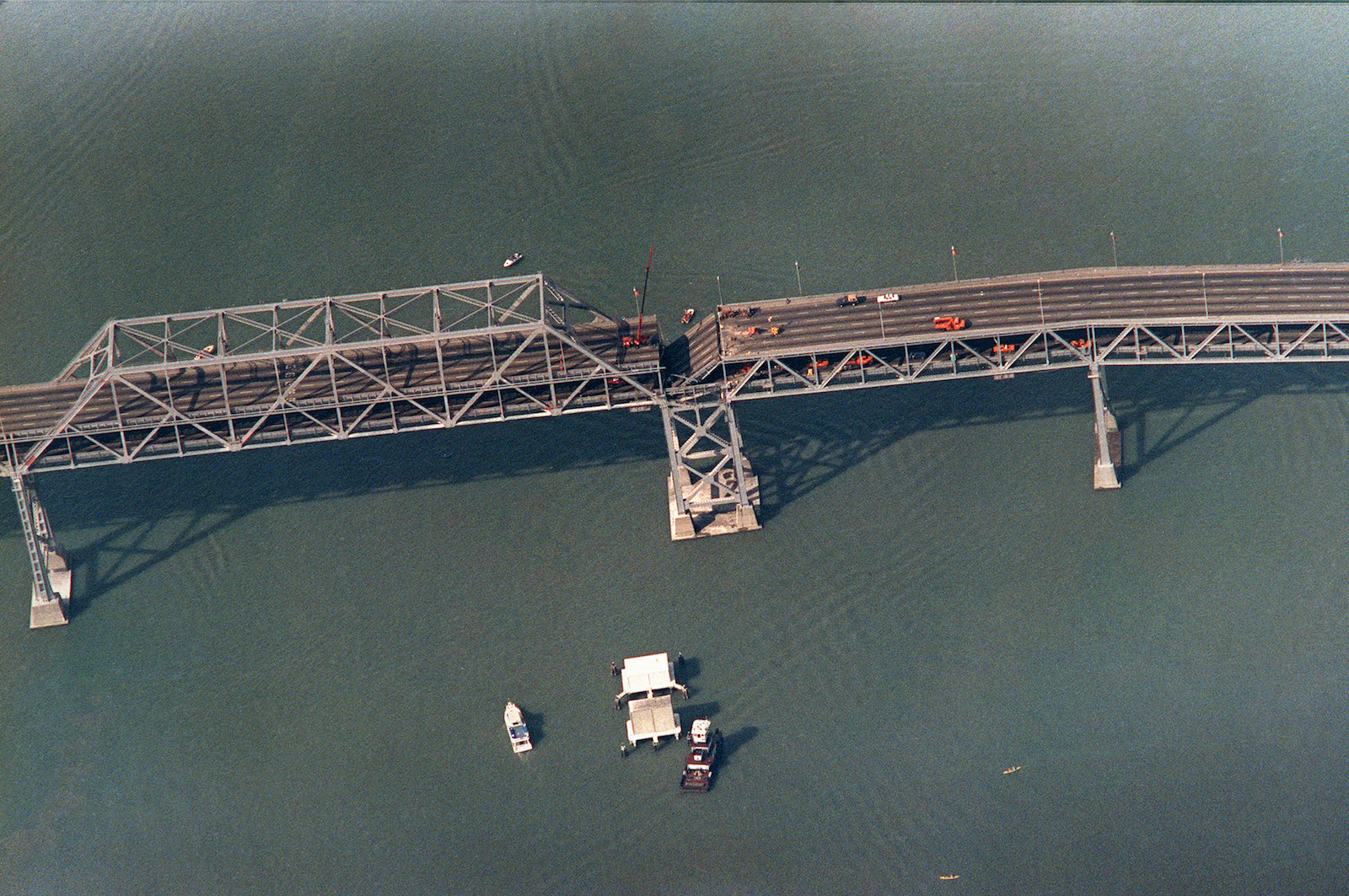 A collapsed portion of the Bay Bridge caused by an earthquake in northern California. It's important to think more deliberately when making decisions by studying both past and current setbacks.

Company managers have seen their enterprises devastated by increased coronavirus cases, social distancing and forced closings. The number of restaurant patrons, airline passengers and office workers remain a fraction of their pre-pandemic totals across much of the world, and a quick and full comeback is still nowhere in sight.

While company managers have little control over the spread of the pandemic, they are responsible for managing the responses of their own enterprises. Based on a study of catastrophic risk management in a range of firms before the coronavirus, we suggest several courses of action for those facing COVID-19. The actions are premised on changing the way decision makers think about preparing for disruptions to their enterprises, and dealing with recoveries in the wake of a disaster, according to Mastering Catastrophic Risk by Howard Kunreuther and Michael Useem.

Psychologists and behavioral economists have long warned that when left to our own devices, we tend to focus on short time horizons and make poorly informed forecasts about the future.

Daniel Kahneman, a recipient of the Nobel Prize in economics, makes a compelling case for us in Thinking, Fast and Slow to raise our game by more carefully reflecting on how we make decisions before and after unlikely events that can have serious impacts on firms’ operations.

By reflecting on the impacts of low-probability but high-consequence events, such as hurricanes, wildfires and pandemics, rather than treating them as beyond our normal threshold of concern, we can take invaluable steps before it is too late.

A good way to learn to be more deliberative is to study both past and current setbacks, including the pandemic we are all struggling with now. By doing so, we will be better able to respond to our current crisis and develop longer-term strategies for contending with future reversals.

A starting point is enhancing risk vigilance, the ability to foresee potential disasters and ready oneself in advance. To illustrate the challenge, homeowners in the San Francisco region had known their area to be seismically active, yet only 22% had earthquake insurance coverage when the 1989 Loma Prieta earthquake killed 63 people and caused $6 billion in property damage, according research by professor Risa Palm. But four years later, earthquake insurance coverage had increased to 37%. The same behavior occurred in the aftermath of the 1994 Northridge earthquake in the Los Angeles region that killed 57 and caused $20 billion in property damage. The rate of homeowners’ earthquake insurance more than doubled in areas hit by the quake, wrote Palm in Illusions of Safety: Cultural and Earthquake Hazard Response in California and Japan.

Our Personal Experience Shapes Our Response

In other words, personally experiencing a disaster, not just hearing or reading about one, significantly improved the victims’ deliberative thinking about the next one. Yet, a subsequent challenge is for managers to then maintain that vigilance as a disaster recedes in the rearview mirror. Follow-up studies reveal that just 10% of homeowners in California hold earthquake insurance today, even as the region is likely to experience another devastating earthquake as the years pass.

By taking steps to prepare for future risks — rather than myopically assuming they will not happen — managers are more likely to reduce their potential consequences.

Fortunately, other research offers a more affirmative view of the sustainability of deliberative thinking. Consider a study of the childhood experiences of company executives who had been exposed in their formative years to an earthquake or other natural disaster that had caused large numbers of nearby fatalities and significant damage.

It found that CEOs who had experienced or witnessed those early losses built more rainy-day reserves in their companies than those who had been spared the disasters, a sign that their own risk vigilance had been sustained for decades.

Managing Risk Is an Art

A second feature of deliberative thinking is risk management, a leader’s ability to balance risk appetite, such as when they venture into new territory, with risk tolerance should they suffer severe losses, as many have during the current pandemic. By taking steps to prepare for these eventualities — rather than myopically assuming they will not happen — managers are more likely to reduce their potential consequences.

Along this line, a study found that insurers that strengthened their risk management capabilities had lower volatility in their earnings and far outperformed comparable enterprises. While we never know for certain what calamities lie ahead, managers who have readied their firms to do better following a catastrophe report higher returns over time.

Tragically, it took the death of two Walmart employees for the company to introduce additional safety measures that included more widespread checking for worker symptoms, making masks and gloves available to their employees and limiting the number of shoppers in its stores. Had Walmart undertaken protective measures early in the pandemic by thinking more deliberatively, it might have averted the fatalities.

The Steps to Take

Drawing on these and other studies, we recommend three steps to increase deliberative thinking amidst the pandemic in whatever role you are playing:

Step 1. Make risk vigilance and risk management intrinsic features of your daily deliberations. Check with those who may already be more deliberative than you, whether epidemiologists or even your competitors.

Step 2. Build on what you already do well. Pharmaceutical firms during the pandemic have doubled down on vaccines, beer makers on sanitizers and auto producers on ventilators.

Step 3. Act deliberatively now to help others think similarly. The owner of three crowded pizza stores in Tennessee closed them voluntarily because they were jammed and patrons were not distancing themselves. Less than a day later, a nearby restaurant shuttered itself for the same reason, citing the actions of the first.