From Nepal Quake, Lessons for the U.S. 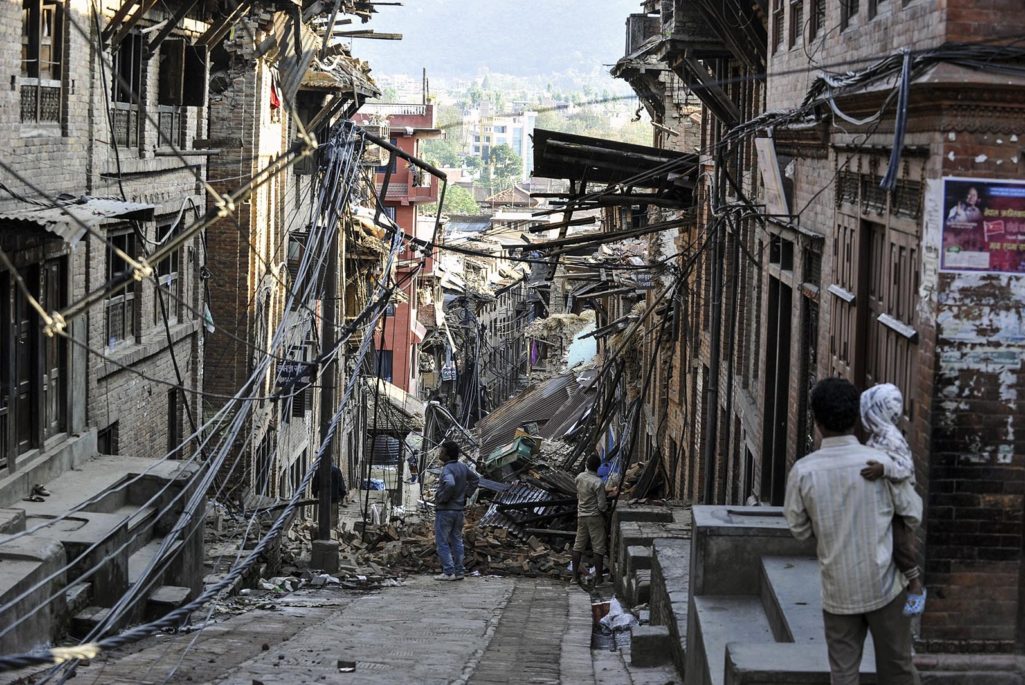 Residents look at collapsed houses in Bhaktapur, on the outskirts of Kathmandu after a 7.8 magnitude earthquake hit Nepal.

[Editor’s Note: This piece was written before Nepal was hit by a second earthquake.]

The appalling devastation in Nepal from the recent earthquake sends two compelling messages. First, the best time to prepare for a disaster is prior to its occurrence. And second, there is a window of opportunity after a catastrophic event to take long-term protective measures.

In recent years there were many initiatives in Nepal to raise earthquake awareness of the general population and promote safe construction for new property through building codes; however, most structures were built a long time ago and hence were highly vulnerable to damage from seismic events. It is understandable why an impoverished country like Nepal and its residents devoted their time and resources to other more pressing issues, even though there were ample warnings that a massive earthquake was waiting to happen. But we have sometimes behaved the same way in the United States. Poorly designed levees in New Orleans resulted in massive damage after Hurricane Katrina, and, in the Northeast, too few homeowners took protective measures and suffered severe damage from storm surge caused by Hurricane Sandy.

We are all paying close attention now to the aftermath of the 7.8-magnitude earthquake that struck Nepal, with several thousand dead and many thousands injured or missing. Homes and office have collapsed, towers and temples have crumbled, and several dozen climbers perished when resulting avalanches smashed their Mt. Everest base camp. By sheer good fortune, the human toll was far less than it might have been. School classes were out since it was the weekend, and caving ceilings crushed empty desks instead of pupils.

Just a week before Nepal’s event, about 50 earthquake specialists had gathered in its capital city.

Just a week before Nepal’s event, about 50 earthquake specialists had gathered in its capital city, Kathmandu, to recommend ways for the country to prepare for another “big one” like the 8.2 earthquake that had leveled the city in 1934. Said the head of Earth Sciences at Cambridge University in referencing the new one, “It was sort of a nightmare waiting to happen. Physically and geologically what happened is exactly what we thought would happen.”

And that could happen nearly everywhere, including here at home, as evidenced by the natural, technological, and human-made disasters that have occurred during the past 15 years: the terrorist attacks of 9/11; Katrina in 2005; the Gulf oil spill of 2010; the Japan earthquake, tsunami, and nuclear-plant disaster in 2011; and Sandy in 2012. And California remains as earthquake prone as ever.

Given the attention that has been generated by the earthquake in Nepal, what can we do at home to prepare for the worst, to ensure that the damage is minimized and recovery is maximized? From a close-in look at another devastating earthquake — an 8.8 magnitude earthquake in Chile in 2010 — and our studies on a range of other disasters, we point to two vital measures.

We found in Chile that a mutually reinforcing combination of strong national leadership and institutional practices in place before the crisis proved vital for the country’s comeback. The measures included fiscal responsibility, well-enforced building codes, and earthquake insurance.

And Chile’s post-disaster leadership decisions were guided by deliberative thinking that transcended the tactical and intuitive thinking that dominates much of our everyday actions, especially during a crisis. Its president insisted that the country become far better prepared for the next calamity, and to that end, he required that each of his cabinet members meet a host of tangible and transparent short- and long-term goals on time, and also that his economy minister finance the reconstruction without plunging the country into debt.

Fortunately, 96 percent of the mortgaged residential properties in Chile were insured to some extent against earthquakes in 2010. By contrast here at home, about 90 percent of Californians do not hold such protection.

Moreover, building codes in Chile are well-enforced since developers are held responsible for damages to their structures for 10 years after the building has been constructed; prison terms can result for failure to comply. A third of the damage from Hurricane Andrew that hit Miami-Dade County in Florida in 1992 could have been avoided had building codes been enforced there. Florida has now learned from this experience and today has one of the most well-enforced building codes in the country.

As large-scale risks of many kinds have increased in recent years, now is the time for us to ready ourselves for our own next big one, whatever its form. If the devastating experiences of Nepal and Chile can be appreciated and the action principles extricated, we will be in a better position to confront and come back from calamities that we still too often believe will not happen to us — until they do.

This piece first appeared in the Philadelphia Inquirer.

Carolina Klint Risk Management Leader, Continental Europe at Marsh
URL: https://www.brinknews.com/from-nepal-quake-lessons-for-the-u-s/
Get ahead in a rapidly changing world. Sign up for our daily newsletter. Subscribe
​​