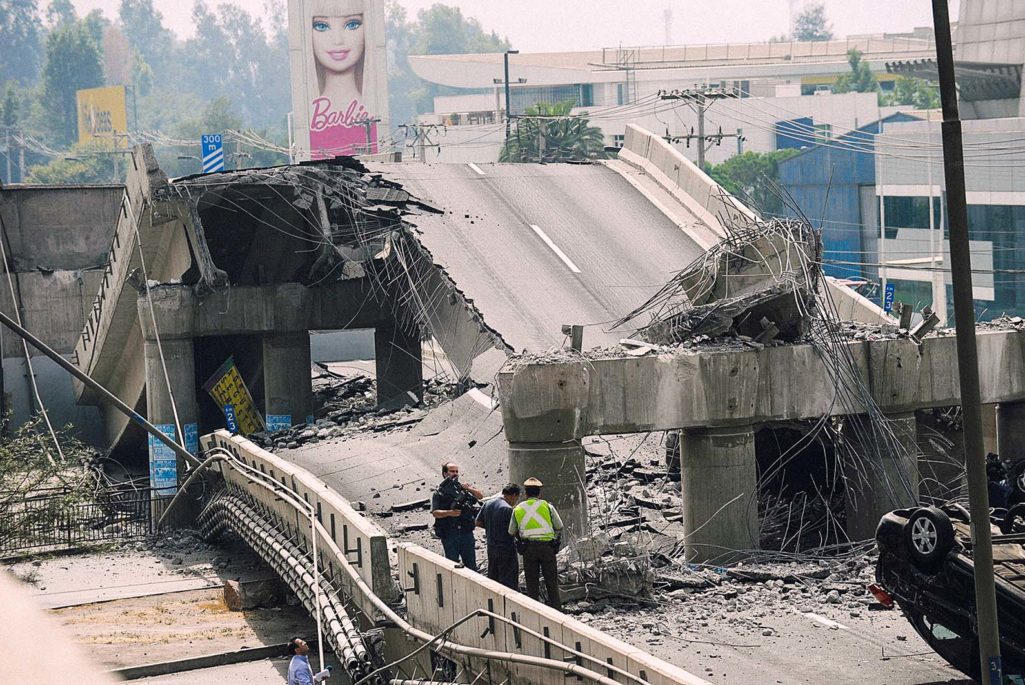 The rubble of a collpased bridge is seen in Santiago after a huge 8.8-magnitude earthquake that rocked Chile in 2010. The massive quake plunged much of the Chilean capital, Santiago, into darkness as it snapped power lines and severed communications.

In 2010 an 8.8 magnitude earthquake wracked Chile—the sixth-largest quake in the world since 1900. NASA estimates that the event moved Chile’s capital, Santiago, eleven inches to the West, and even tilted the Earth’s axis by three inches. On the ground, the shocks killed hundreds, displaced millions, and devastated nationwide infrastructure—schools, hospitals, roads, homes, and businesses—across a vast swath of the country’s midsection, paralyzing the country for weeks.

Occurring at the twilight of Michelle Bachelet’s presidency, just days before the inauguration of Sebastián Piñera, Chile found itself in the grip of national catastrophe just as the nation’s top political leadership was in a period of transition.

Circumstances were dire, the outlook was bleak, and the barriers to recovery seemed staggering—yet, within six weeks, all of Chile’s schoolchildren had returned to classes; by the end of the year—despite sustaining economic damages equivalent to one-fifth of the country’s total GDP—Chile’s economy was back on track, delivering a strong 6 percent annual growth rate at a time when the world economy was still reeling from the 2008 financial crisis. Chile’s restoration proved so swift and robust that it garnered accolades from the OECD (Organization for Economic Co-operation and Development) who later that same year extended an invitation to Chile to become a full member of its trade forum.

To what can we attribute Chile’s improbable comeback from such sweeping catastrophe? This constitutes the central question of Leadership Dispatches, a book we wrote after an invitation by President Piñera to study Chile’s remarkable recovery in finer detail.

In the wake of the devastation, the country mobilized to help the injured and bury the dead. It then turned to repairing hospitals, reopening schools, and rebuilding homes. But Chile did not stop with the immediate rebuilding. Its national leadership insisted that the country think longer term, that its comeback be more substantial than a temporary band-aid.

The president insisted that the restoration proceed with urgency and a willingness to cut through bureaucratic cobwebs, but also emphasized that recovery efforts should not be hastily executed stopgap measures. During the massive housing reconstruction effort, Piñera instructed his cabinet to prioritize attention on the regions most affected and to do so in ways that also engage stricken residents in the reconstruction with “dignity” and “freedom of choice.” The several hundred thousand homes that had been destroyed or damaged were to be rebuilt as quickly as possible—though the rebuilding would have to be respectful of neighborhood networks and local preferences. In this way, the recovery would proceed apace, but go well beyond a return to what existed prior to the quake: better housing and more effective tsunami defenses became top priorities, as well as diligent preservation of the nation’s overall economic health in the face of the expensive natural disaster.

Generating funds for the comeback proved an enormous challenge—as the earthquake’s damage touted a total price tag of $30 billion (the equivalent of a $2.7 trillion loss to the United States, in terms of percentage of GDP). Hurricane Katrina—the United States’ costliest disaster in recent history—cost about $125 billion, nearly but not quite 1 percent of the country’s total GDP; the $235 billion cost of the 2011 Tōhoku earthquake in Japan was equal to 4 percent of Japan’s GDP; Chile’s disaster, meanwhile—meager though it compares in terms of discrete dollars—was equivalent to a whopping 18 percent of the nation’s GDP. While low-income countries often turn to international donors for financing reconstructions, Chile’s relative affluence—it had one of the highest incomes per capita in Latin America—led the president and finance minister to opt for a recovery strategy that would rely almost entirely on the country’s own resources.

Through deft management of the country’s budget, the finance minister drew on a portfolio of actions—temporary tax revenues, budget reallocations, utilization of a national copper fund—to finance the recovery while also avoiding significant debt-accrual (a strategy markedly different to that of the U.S. government which enlarged the national deficit by more than $140 billion in the wake of Katrina). This sober and measured stewardship of the economy protected Chile’s international credit rating from deterioration, staving off long-term economic consequences in the process.

This two-part recipe of able national leadership and forward-looking institutional backbone proved vital to Chile’s restoration and stands as an example, we argue, for others tasked with preparing for or reacting to crises. The political, financial, and—most importantly—human costs of crisis mismanagement are significant and often avoidable. Recalling how poorly the recovery from Hurricane Katrina was managed in New Orleans despite days of advance warning, offers vivid incentive for exploring better preparedness methods and response strategies, like those deployed in Chile.

Large-scale catastrophes and extreme events of all stripes—from environmental disasters to financial crises, disease pandemics to international terrorism—are chronic threats with often sweeping impacts. To withstand them, it is essential that we look for lessons not only from debacles like Katrina, but also from success stories, like Chile’s, so as to better understand and successfully amplify the human capacity to overcome great adversity.

This piece was adapted from Leadership Dispatches: Chile’s Extraordinary Comeback from Disaster.

Erin Sikorsky Director of The Center for Climate and Security and the International Military Council on Climate and Security
URL: https://www.brinknews.com/chilean-earthquake-an-improbable-comeback/
Get ahead in a rapidly changing world. Sign up for our daily newsletter. Subscribe
​​