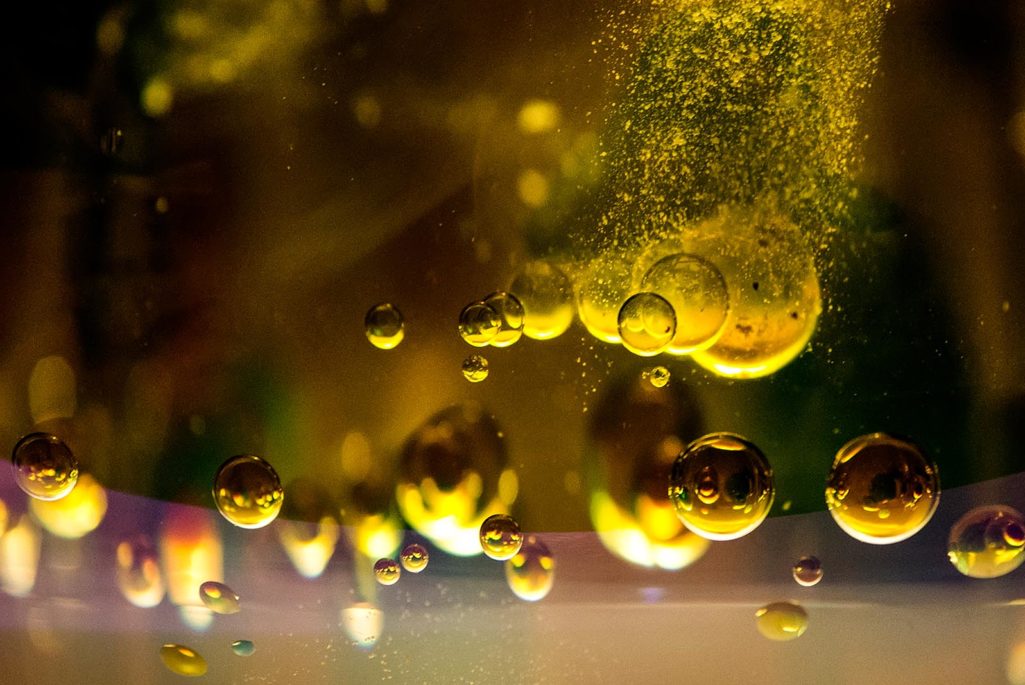 Photo shows protocell technology which is programmed to cultivate an artificial limestone reef under the city of Venice to strengthen foundations.

Synthetic biology is gaining notoriety in the landscape of emerging technologies with the power to disrupt and transform entire industries and markets. Already a multibillion dollar industry, and expected to grow to $11.9 billion by 2018, the technology can be used for everything from genetically modifying humans to creating new flavors, cosmetics and even construction materials.

As synthetic biology can often be used to replace petroleum chemistry, it offers possibilities for environmentally friendly manufacturing. Nations, in particular China, the UK, Germany, and the U.S., are investing in synthetic biology to create jobs and grow their economies.

And it’s all happening in an atmosphere of little regulation and murky governance.

Which Nation will Make the Rules?

Given the tremendous potential of synthetic biology, it’s not surprising that the field has become such a hot area for investment. But what is less appreciated is how these investments will ultimately affect how the field is governed, shaping the “rules of the road.” It is expected that regulations will eventually be developed for specific synthetic biology applications, filling gaps in existing regulations for biotechnology, pharmaceuticals, or the environment.

Science on the Front Lines of Governance

Before any new regulations can be crafted, synthetic biology rules and governance will first be shaped by those who are most intimately familiar with the technologies: the scientists working at the leading edge of the field. Therefore, the responsibility to set cultural expectations, norms, and safety expectations for synthetic biology in the years to come will be dominated by the investor nations and their experts. They will decide which synthetic biology applications are developed first, and they will decide which safety measures are necessary and sufficient. As science is an international endeavor—with internationally recognized journals, conferences, and collaborations—these norms will be spread internationally.

One example of a synthetic biology application that will require governance is the controversial technique allowing human germline editing, which deliberately changes the DNA passed on to children and future generations, essentially giving us the ability to create genetically modified humans. The ability to perform germline edits has become much easier using a technique that became available to scientists in 2013—Clustered Regularly Interspaced Short Palindromic Repeats, or CRISPR. This technique allows sections of DNA to be searched and replaced in a manner roughly analogous to editing a document in Word. The possibility to edit the germline allows the possibility to delete some hereditary diseases, such as the fatal, progressive neurodegenerative Huntington’s disease. Or, the technology could be misapplied; some fear that parents will make changes that are not medically necessary, in essence “designing” their babies, with uncertain future effects that will be passed on, generation to generation.

Can we trust scientists to self-govern and restrict their research to what’s in the public interest?

Scientists have taken the lead in considering the ethical and safety ramifications of germline editing, and setting a course of action for the work. In 2015, a group of scientists were convened by Jennifer Doudna, one of the molecular biologists credited with developing CRISPR, to discuss the scientific, medical, legal, and ethical implications of germline editing. In a consensus paper published in Science magazine, the scientists recommended against performing germline editing in people for now, but to proceed with foundational research that does not cross the line into embryo modification. The U.S. National Academy of Sciences also convened international forums of scientists and other nation’s academies of scientists to explore the scientific, ethical, and policy issues associated with human gene-editing research, an effort that is meant to be ongoing and open-ended.

Can Science Govern Itself?

Determining what the rules should be, as well as how much safety data should be required will always be a challenge, and not all scientists, experts and observers will agree on where the limits are. To that point, a research group based in China caused consternation when they used CRISPR to modify nonviable human embryos in an attempt to correct the mutation that leads to beta thalassemia, a debilitating blood disorder. While the standards or expectations set by the scientific community are impossible to strictly enforce in an international context, the scientific community does set boundaries; those who flout those standards have to justify their actions in the international practice of science. The Chinese research on beta thalassemia, though groundbreaking, was rejected by top-tier scientific journals Nature and Science, in part because of ethical objections.

Letting scientists govern their work raises issues of trust. Would scientists truly work to govern their research so that it is in the public interest? Self-governance is not the only form of governance in biotechnology; nations have regulatory frameworks, there are international conventions, and if the science leads to a product that will be sold or used as treatment, it will need to adhere to the regulatory frameworks to be marketed.

While self-governance is imperfect, there aren’t many alternatives when technologies are still in the very early stages of development. This is especially true when the applications are drawing broad interest and funding from private companies and national governments, and particularly when there is great potential for tangible benefits to health and medicine. For example, when the U.S. instituted a funding prohibition for stem cell research in 2001, it did not shut down the field. The decision did, however, largely leave U.S. scientists and policymakers out of that process until the bans were loosened. It should also be reassuring that self-governance does not mean no governance; scientists must be given tools and support to ensure that their work is in the public interest.

In the coming years, there will be many other synthetic biology applications that will require new rules and norms. Some of these future applications and how they should be governed are already under discussion: ways to make populations of mosquitos resistant to malaria or Zika; “de-extinction” to bring back a species that was lost; or brewing opiates by fermentation, like brewing beer.

In five to 10 years, who knows what applications will require norms and safety standards? One thing is clear, however: if a nation’s policymakers and institutions would like to have a say in the direction and governance for the future of synthetic biology and other powerful, international biotechnologies so that they are in the public’s interest, they will need their nation’s scientists at the technological forefront, leading the way.

Til Schuermann Partner and Co-Head of Oliver Wyman’s Risk & Public Policy Practice
URL: https://www.brinknews.com/synthetic-biology-governance-for-a-small-planet/
Get ahead in a rapidly changing world. Sign up for our daily newsletter. Subscribe
​​