Synthetic Biology: Next Wave of Disruption for Industrialization of Biology 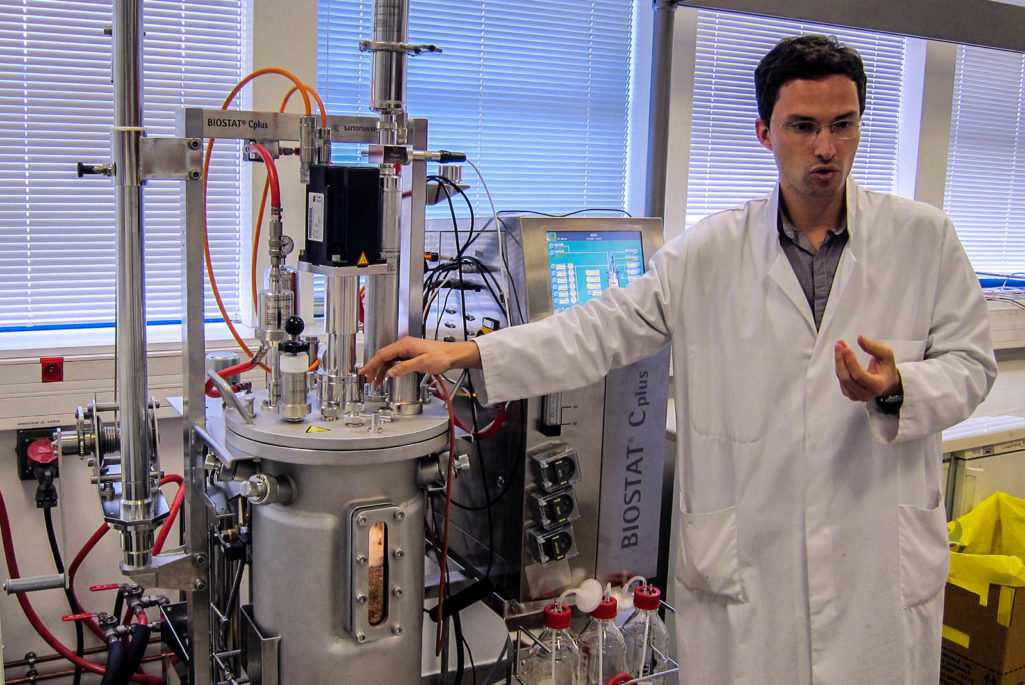 Global Bioenergies microbiologist Romain Chayot stands in front of a demonstrating machine producing isobutylene. Global Bioenergies produces isobutylene, a crucial gas to make products such as fuels, plastics, plexiglas or synthetic rubber, made from plants instead of oil.

Synthetic biology—a relatively new field that aims to make biology easier to engineer—is quietly disrupting traditional manufacturing methods, leading to the industrialization of biology and a global market estimated to be worth $11.4 billion by 2021 with the potential to expand at a 24 percent clip through 2021.

According to the U.S. National Academies, “[l]owered costs, increases in production speed, flexibility of manufacturing plants, and increased production capacity are among the many potential benefits that the increased industrialization of biology may bring to producers and consumers of chemical products that have not been previously available at scale.”

Of course, biology has been used in industrial processes for a long time. Agriculture, products such as beer and wine, and some medicines and vaccines all require biological processing. What has changed, however, is that biology can increasingly replace the use of petrochemicals in manufacturing, and it can also circumvent the resource-intensive harvesting of commercial plants.

As a result, synthetic biology is expanding into industries that are not normally associated with biology, including mining, construction materials, perfumes, flavors, fibers, detergents and adhesives.

There is a great deal of hope that these powerful synthetic biology tools, including genome-editing tools like CRISPR, will transform medicine as well and make real differences for cancer treatments or even people afflicted with inherited diseases. However, those applications, while underway, have much longer timelines to demonstrate their efficacy and safety. In the meantime, synthetic biology is being used in areas where the regulatory restrictions and technical challenges are not as high, particularly as an alternative manufacturing method.

Not surprisingly, the vast promise of synthetic biology has inspired a great deal of investment. BCC research, a market analysis company, estimated in 2016 that the synthetic biology market reached nearly $3.9 billion in 2016 and could hit $11.4 billion by 2021. Synthetic biology is also listed as a top emerging technology to watch, according to the World Economic Forum’s 2017 Global Risks Report.

The first major synthetic biology product, a treatment for malaria, demonstrates how synthetic biology can shortcut resource-intensive harvesting methods. Artemisinin, derived from the Artemisia annua plant, is recommended for treating malaria by the World Health Organization and has been used for medicinal purposes since at least 200 B.C. However, artemisinin has often been in short supply, as the amount grown by farms in China, Vietnam and in Kenya have been inadequate to the demand, which has led to fluctuating availability.

Synthetic biology provided a breakthrough when a lab at the University of California, Berkeley, synthetically recreated the biochemical pathway to produce this life-saving drug in baker’s yeast in 2003; now, synthetic artemisinin is being produced and used in sub-Saharan Arica.

Another example of how synthetic biology is industrializing biology comes from the vanilla market. Vanilla is the second most expensive spice after saffron, in large part due to the difficulty in growing the plants. Vanilla plants can only grow in hot, wet, tropical climates, and in order to produce vanilla beans commercially, the orchids need to be pollinated by hand, and curing the beans takes months. Global demand for vanilla flavoring can’t be satisfied by vanilla beans alone, so most vanillin, the dominant flavor in vanilla, is made artificially either from petrochemicals or from chemically treated paper pulp.

Despite significant hurdles, the industrialization of synthetic biology is at an inflection point.

The production of vanillin through synthetic biology directly competes against the petrochemical-produced methods, not the original beans, which are still in high demand. Vanillin by itself does not taste quite as good as the vanilla extract from cured beans, as the beans have more than 250 flavor and aroma compounds in addition to vanillin. Still, there are advantages for using synthetic vanillin: Synthetic production is not affected by weather or crop failures, so there is a steady supply and less price volatility.

The Swiss synthetic biology company Evolva has made synthetic vanillin and has used synthetic biology to take on additional flavor markets, including a synthetic version of saffron. Interestingly, these products can be labeled as “natural” because they are made from the natural process of fermentation—i.e., “brewing”—which differentiates them from the same flavorings derived from petrochemicals.

Tires are another example of the industrialization that synthetic biology is bringing about. Tires used to be entirely made from natural rubber, harvested from Hevea trees found in Thailand, Indonesia and Malaysia. Yet again, the natural supply is insufficient to meet extraordinary demand—in 2015 alone, 1.7 billion tires were produced worldwide. To fill the gap, tire manufacturers use synthetic rubber (isoprene) made from petroleum, which accounts for 70 percent of the supply used for tires. Approximately 7 gallons of oil are required to make a single tire: 5 as feedstock and 2 to supply the energy involved in manufacturing.

Recently, several companies have been seeking bio-based alternatives that are not dependent on fluctuating oil prices. Goodyear partnered with DuPont (which had acquired the biotech company Genencor in a larger M&A deal for Danisco) and Michelin has partnered with Amyris to bring BioIsoprene to market. Prototype tires have been developed but are not yet available for sale. A key stumbling block: It’s tough to predict when such fuels will become more cost-effective than petroleum-based products; synthetic bio-products rely heavily on government subsidies or tax breaks that can shift with prevailing political winds. In addition, while biologically produced tires made sense in a world of $100 per barrel oil, in today’s depressed oil market, petroleum-based products are much tougher to compete with.

Synthetic silk is on its way to market. Silk is known to be biodegradable and hypoallergenic; it has tensile strengths comparable to steel; it may be even tougher than Kevlar and yet is soft and durable enough to go in the washing machine. A startup called Bolt Threads is using a fermentation process to produce spider silk proteins in yeast and recently signed a $50 million deal with Patagonia to use the silk in their products. Given that a spider silk tie is currently available for $314, an entire spider silk jacket isn’t within reach for everyone.

Disruption doesn’t happen in a vacuum. There are significant hurdles confronting the synthetic biology field, from a lack of accurate and detailed economic data on the role of bio-based production in the economy, to a disconcerting pipeline of qualified bioengineers and researchers, to a weak governance framework from which to evaluate and guide a field to ensure important social values are balanced.

The industrialization of biology is at an inflection point and promises to address a range of global issues. As the U.S. National Academies said, “scientific, technological, environmental, and economic trends are converging now that are creating positive conditions for the rapid industrialization of biology” but it will require “new tools, new knowledge, and new financial mechanisms” to realize its true potential.