The Promise and Peril of Synthetic Biology Needs More Attention 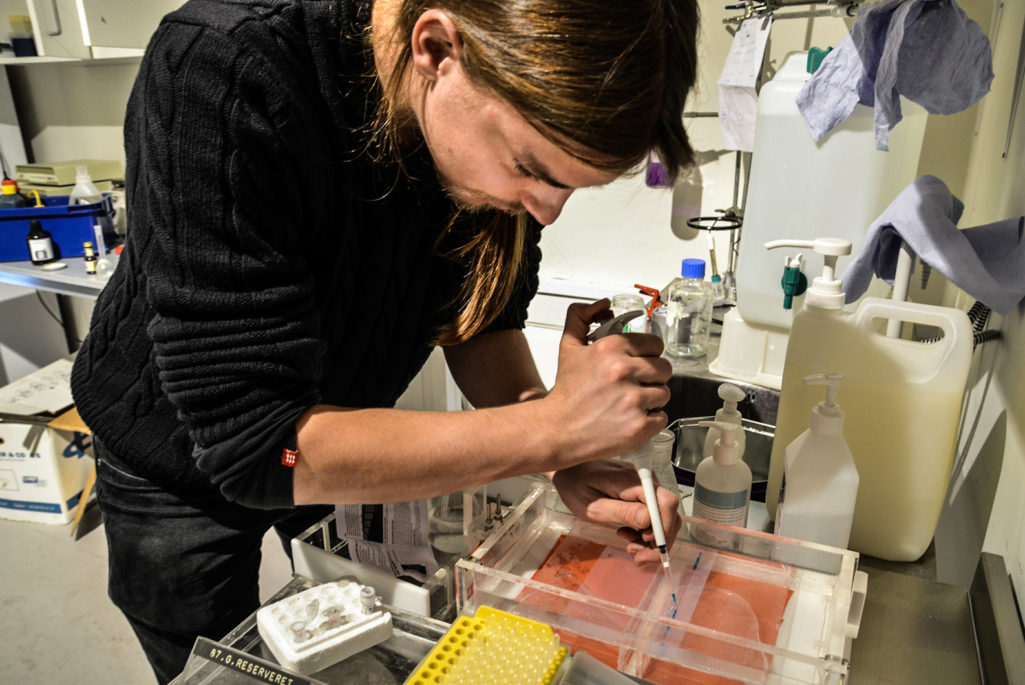 Rüdiger Trojok carries out gel electrophoresis in the 'Biohacking: Do It Yourself!' lab installation at Medical Museion, using a combination of homemade and donated instruments.

Synthetic biology—often called “genetic engineering on steroids”— is on track to become an economically vibrant industry with national security implications. The rapidly expanding synthetic biology market is projected to grow to $16 billion by 2018.

While it is a relatively new field, synthetic biology has already been used to develop an antimalarial drug, make flu vaccines more rapidly, and to produce biofuels, detergents, adhesives, perfumes, tires, and specialized chemicals that formerly required the use of petrochemicals.

But like other powerful and important technologies, synthetic biology holds the potential for accidental or deliberate misuse, which could lead to severe health and environmental consequences. The potential dangers of synthetic biology, such as accidental pathogen release, are detailed in a new report, Mitigating the Risks of Synthetic Biology, from the Council on Foreign Relations.

There is a large number and wide range of potential actors who could misuse synthetic biology, including nation states, terrorist groups, or even individuals with modest resources. And it would be difficult for any government or institution to prevent or even detect such activities.

One positive example of the power of synthetic biology can be seen in the International Genetically Engineered Machine Competition (iGEM), where teams compete to build simple synthetic biological systems from standard, interchangeable parts. In 2014, the undergraduate division of this competition featured 243 teams of eight to ten students from Asia, Europe, and North America who used synthetic biology to make useful new products, including biologically based water filtration systems and cervical cancer detection kits.

Despite its positive applications, synthetic biology makes it easier to create biological weapons because it allows the scientist to recreate a pathogen from scratch. The genetic sequences of many pathogens, including eradicated ones like smallpox or rinderpest, are freely available online.

Biological accidents are also a concern. While laboratory accidents occur regularly, they typically do not involve infectious organisms. Yet laboratory-acquired infections with pathogens that are particularly transmissible from person to person—engineered with synthetic biology or not—could have consequences that go well beyond the laboratory and national borders and could constitute a threat to national security.

Complete prevention of the accidental or deliberate misuse of synthetic biology is not possible, but the level of risk can be reduced to diminish negative consequences.

The U.S. should work to create national and international standards for biosafety education and oversight.

Putting Synthetic Biology ‘Back in the Bottle’

The most important actions the U.S. can take relate to biosafety. The U.S. should work to create national and international standards for biosafety education, oversight, and minimum requirements for biosafety resources.

Borrowing from the aviation industry, the U.S. should have a no-fault reporting mechanism for reporting biosafety lapses, and should encourage other nations to adopt such a model. Biosafety efforts should extend beyond the traditional laboratory setting into the new places where synthetic biology is performed, including community laboratories and DIY groups, and should be the focus of additional research. The Defense Advanced Research Projects Agency is funding projects intended to make synthetic biology safer, but these projects need to be shepherded beyond the DARPA funding mechanism into more stable funding futures.

Regulations and oversight from the Environmental Protection Agency and the Food and Drug Administration need to be updated and clarified so that synthetic biology applications are appropriately overseen, as well. This is needed not only to diminish the risks of accidental consequences, but also because the regulations should create a level playing field to encourage innovation in synthetic biology.

The example of how genetically modified organisms became a public policy issue in the EU should serve as a warning to the U.S.; it is important to avoid a broad-brush ban of the entire synthetic biology field. Instead, it is specific synthetic biology products that should be regulated, whether they are detergents, vaccines, or seeds.

Finally, the U.S. should continue to work with other nations to strengthen the “weakest links” for international public health and disease monitoring. The 2014 Ebola crisis in West Africa is a clear example of what can happen when an infectious disease outbreak is not contained, and when there is a deficient or absent public health infrastructure. Synthetic biology may pose particular problems that make public health responses more challenging in the event of an accident or intentional use, but there is a severe deficit of public health infrastructure globally to deal with even natural diseases. Efforts to improve public health around the world will make it easier to contain and limit outbreaks of any disease, regardless of their origin.