Terrorism is on the Rise… But There’s a Bigger Threat 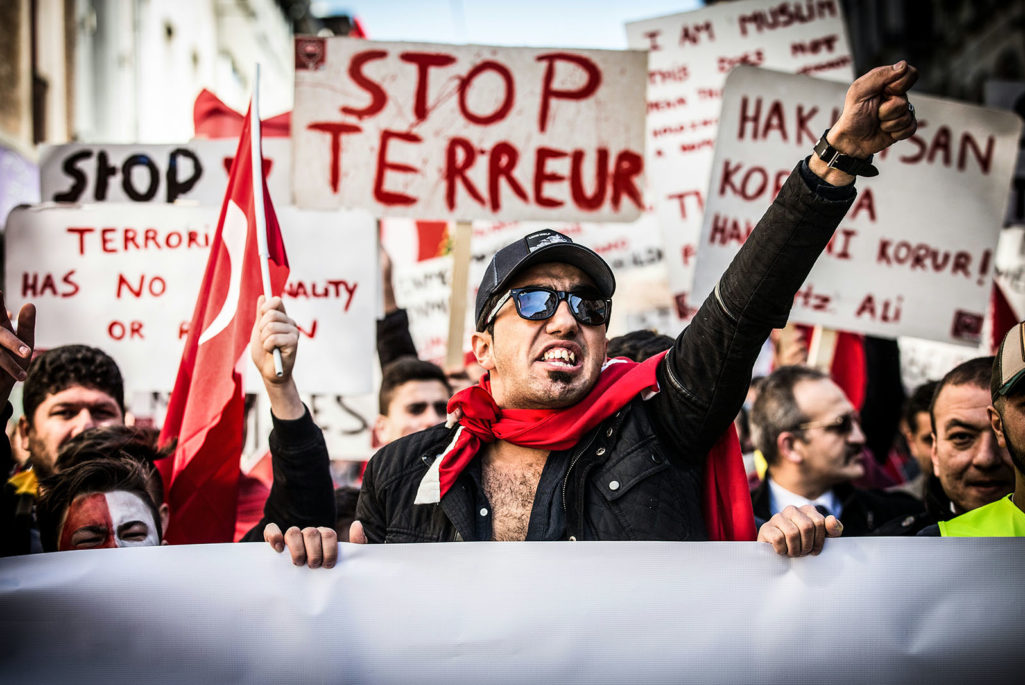 People take part in a march 'Gent against terrorism' organized by three Turkish organizations on April 10, 2016, in Gent. Suicide bombers claimed 32 lives when they blew themselves up at Brussels airport and at a metro station on March 22.

High-profile attacks on major cities in Belgium, France and the United States have set the world on edge. Commentators are talking of a new kind of protracted guerrilla war stretching from the Americas and Europe across Africa, Asia and the Arab world. This one is irregular, hybrid and networked, involving a constellation of terrorist organizations such as ISIS and Al Qaeda.

Rather than hitting specific groups of people or symbolic sites, cities themselves are coming under siege. Complicating matters, violent extremists are recruiting directly from poorer and marginal neighborhoods across the West.

The extent of local recruitment and so-called “extremist travelling” from Western countries is certainly cause for concern. One study estimates that as many as 31,000 people from 86 countries have made the trip to Iraq or Syria to join ISIS or other extremist groups since June 2014. It is not just Western Europe or North America that is proving to be fertile ground for so-called remote radicalization, but also Russia and Central Asia. Many foreign fighters are killed while fighting abroad, but as many as 30 percent of them eventually make the trip back home. Politicians are scrambling to respond and hate crimes against minority groups are on the rise.

It is statistically undeniable that terrorist violence is on the rise. But is today’s terrorist violence really more intense and widespread than in, say, the 1960s and 1970s? Are Western European and North American cities really the new front line of a global jihad? The answer partly depends on how terrorism is defined. There is currently no international legal or even academic agreement on what constitutes terrorism. Some experts say that it consists of violence perpetrated by non-state actors against civilians to achieve political religious or ideological change, but that sounds a lot like armed conflict. Complicating matters, governments routinely conflate terrorism and insurgency.

One way to better map out the extent of the terrorist threat is to follow the data. Notwithstanding serious challenges related to the quality and coverage of statistics on terrorism, warfare and homicide, it is possible to detect trends and patterns by honing in on the prevalence of lethal violence.

It turns out that extremist violence is much less pervasive than you might think. As other analysts have noted, it is significantly more prolific outside Western countries than in them. A recent assessment of terrorist risks in 1,300 cities ranked urban centers in Afghanistan, Iraq, Libya, Nigeria, Pakistan and Somalia as significantly more vulnerable than those in Belgium, France, the UK or the US. At least 65 cities were described as facing extreme risk, with Iraq – especially Baghdad, Mosul, Al Ramadi, Ba´qubah, Kirkuk and Al Hillah – fielding six of the top 10. Consider that between 2000 and 2014, there were around 3,659 terrorist-related deaths in all Western countries combined. In Baghdad there were 1,141 deaths and 3,654 wounded in 2014 alone.

It is true that there have been dozens of terrorist attacks in recent years, but how are they spread around the world? The Global Terrorism Database (GTD) tracks terrorist-related fatalities between 2005 and 2014 in 160 countries. In a handful of cases where there is ongoing warfare – including Afghanistan, Iraq, Syria and Yemen – the GTD sometimes conflates terrorist and conflict-related deaths. The authors of the database go to great lengths to avoid this from happening, but it is unavoidable. There are alternative datasets that apply much more restrictive inclusion criteria, but they are not as broad in their coverage and also suffer flaws. Rather than focusing on absolute numbers of violent deaths, it may be more useful to consider prevalence rates.

On the one hand, most countries at the top of the list of most terrorism-prone are clustered in North Africa, the Middle East and South Asia. They include war-torn countries such as Iraq, Afghanistan, Somalia, Libya, the Occupied Palestinian Territories, Lebanon, Israel, Yemen, Pakistan and Syria. Other countries in the top 15 are more unexpected, not least the Former Yugoslavian Republic of Macedonia, Central African Republic, and Kenya. Belgium comes in at 86th place while France and the United States come in at 98th and 105th respectively. These latter rankings will obviously shift upwards given recent attacks in 2015 and 2016, but not by as much as you might expect.

Note: Fatalities are classified as terrorist-related if the action occurs outside the context of legitimate warfare activities, insofar as it targets non‐combatants as expressed by international humanitarian law.

Innocent civilians are much more likely to be killed during the course of armed conflicts. The difference between the two is that terrorism is intended specifically to indiscriminately kill civilians, while in wars the killing of innocent civilians and prisoners is expressly prohibited, even if it does occur. War-related killings may be labeled criminal or even terrorist when they are determined to be disproportionate. So how does the risk rating of violent deaths occurring in war zones compare to those due to terrorism? The Uppsala Conflict Database Program records conflict deaths occurring in more than 60 wars between 2005 and 2014. After adjusting the absolute numbers of violent deaths relative to the total population per country, it is possible to determine an approximate conflict death rate per 100,000 people.

It turns out that the risk of dying violently from war is considerable higher than the probability of being killed in the course of extremist violence. Although in some countries this risk is an order of magnitude higher, the overall conflict death rate in conflict zones is still far lower than many might have predicted. For example, the average conflict death rate is sky-high in Syria—site of some of the most horrific warfare over the past decade. But it is comparatively lower in places like Afghanistan, Iraq, Libya, South Sudan, Chad and Yemen, countries that have been exposed to industrial-scale violence. The conflict death rate of course varies according to the ebb and flow of warfare, but the average prevalence is surprisingly low.

Note: Conflict deaths are defined as “battle deaths” caused by warring parties that can be directly attributed to combat. This includes traditional battlefield fighting, guerrilla activity, bombardment of bases and other actions where the targets are military forces or representatives of the parties. Collateral damage, including civilian deaths, is counted.

The Greatest Threat of All: Homicide

And now for the most surprising finding of all: a review of the data reveals that civilians around the world are much more at risk of being killed as result of homicide than either terrorist violence or warfare. Drawing on the Homicide Monitor, it is possible to track murder rates for more than 225 countries and territories from 2005 to 2014.

Although homicidal violence is steadily declining in most parts of the world, it still presents one of the greatest threats of what public health experts call external causes of mortality – especially among young adult and adolescent males.

As in the case of terrorist and conflict-related violence, there are also hot spots where murder tends to concentrate. People living in Central and South America, the Caribbean and Southern Africa are more at risk of dying of homicide than in most other places. The most murderous countries in the world include El Salvador, Honduras, Jamaica, Venezuela, the US Virgin Islands, Guatemala, Saint Kitts and Nevis, Belize, Colombia, Trinidad and Tobago, and Brazil. About 46 of the 50 most violent cities are concentrated in the Americas. Also included in the top 15 most murderous countries, though located outside the Americas, are South Africa, Swaziland and the Democratic Republic of Congo.

And beyond these pockets of extreme homicidal violence, the risk of murder is also more widely distributed than violent deaths associated with terrorism or war. There are roughly 85 countries that are consistently above the global average of around seven homicides per 100,000 people. In fact, about nine in every 10 violent deaths occurring around the world over the past decade were due to murder; just a fraction can be attributed to either war or terrorism. This is not to minimize the real dangers and destruction associated with these latter phenomena, but rather to ensure that we keep our eye firmly on the ball.

Note: Homicides are defined as the deliberate and unlawful killing of one person by another and are registered by police and health departments.

Drawing Lessons from the Data

So what does this morbid retreat into the data of violent death tell us? First, it is a reminder that a relatively small number of countries are dramatically more at risk of terrorist and conflict-related violence than others—especially Afgh anistan, Iraq, Libya, Nigeria, Pakistan, Somalia, Syria and Yemen. While they must protect their homeland from terrorist events, diplomats, development experts and defense specialists would do well to double down on preventive diplomacy and conflict prevention in the most badly affected countries. Doing so could have a dramatic effect on reducing the global burden of terrorist and conflict violence and related humanitarian consequences such as refugee flows and internal population displacement.

Second, there are also a handful of countries – most of them in Latin America and the Caribbean – where homicidal violence is off-the charts. Most of the murders in these states are concentrated in fast-growing large- and medium-sized cities. If homicides are to be reduced there, it is essential that federal and municipal planners focus on risk factors that are driving urban violence – not least social and economic inequality, high rates of youth unemployment, poor and uneven governance, and the limited purchase of the rule of law. There is mounting evidence of data-driven strategies that work—including focused-deterrence, cognitive therapy and targeted prevention, but they need sustained leadership to have lasting effect.

Finally, we need to get better at nurturing resilience—the ability to cope, adapt and rebound in the face of adversity—in high-risk communities. While obviously distinct in their causes and consequences, there are still many commonalities connecting terrorist, conflict and homicidal violence. When communities are disorganized and suffer from neglect, there is a higher likelihood of politically, criminally and ideologically motivated organized violence erupting. Governments, businesses and civil society groups need to make sure that political settlements are inclusive, that marginalized groups and broken families are taken care of, and that resilience is designed in to communities from the get-go.

Andrew Yeo Senior Fellow and SK-Korea Foundation Chair in Korea Studies at Brookings Institution’s Center for East Asia Policy Studies
URL: https://www.brinknews.com/terrorism-is-on-the-rise-but-theres-a-bigger-threat/
Get ahead in a rapidly changing world. Sign up for our daily newsletter. Subscribe
​​