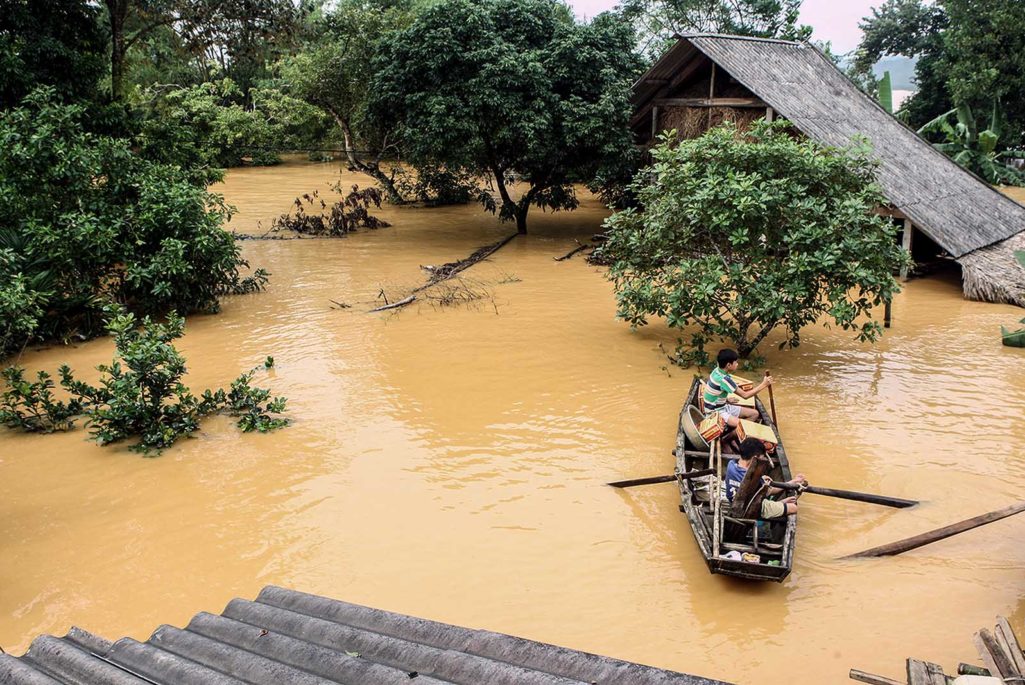 This picture taken on October 16, 2016 shows villagers in a boat transporting boxes of relief aid past flooded homes in a village in Huong Khe district in the central province of Ha Tinh. Severe flooding in central Vietnam has killed at least 25 people and destroyed thousands of homes, officials said on October 17, as the country braced for further destruction from a typhoon.

It’s been raining for days in Chiang Mai, Thailand. The last few months have been very wet and even the past two rainy seasons unusually so. The weather forecaster explains that a multi-year La Niña is the cause and that people now have to brace for the second category five typhoon in a week. Although it weakened when it crossed over Vietnam and Laos into Northern Thailand, the typhoon brought massive amounts of rain. Falling on an already wet and saturated basin, it caused the Ping River to rise to levels unimagined.

Floodwaters in Chiang Mai rose to several meters with a large number of casualties and huge damages as a result. The river channel widened by ten times and deepened by half. Roads, houses, temples, power lines and rice fields on the flood plain of the Ping River were severely damaged or washed away. Not to speak of the enormous damage that the area downstream had to face—the Chao Phraya delta and Bangkok. The 2011 flood was mild compared to this.

Unrealistic? No, this could become reality one day.

In fact, ongoing research at the National University of Singapore found evidence in historical documents and in the sediments of the Ping River that a massive flood took place in 1831 and dramatically widened and deepened the Ping River, wiping out everything on the floodplain. At that time the area was sparsely populated and undeveloped compared to today.

Urbanization and economic growth in delta cities has tremendously increased the exposure to floods, particularly in Asia. For example, in China the population affected by floods grew from about 36 to 121 million between 1984 and 2012, while direct economic losses increased tenfold over this period.

In Asia, hundreds of millions of people live in flood-prone areas that could be affected by extreme events like the Ping River incident. These people are protected by flood infrastructure that may be based on flawed assumptions and limited views of flood size and risk management.

The Wrong Kind of Planning

Extreme flood events and other disasters seem to be more common than the probabilities derived from engineering approaches and risk assessments show. The problem with these approaches is that there are usually few or no measurements for extreme events, which happen on average once every hundred or thousand years. Only by extrapolating the measurements of water flows taken over a few decades can an extreme flood event be estimated. The extrapolation requires making assumptions, which leads to large uncertainties. Yet, the resulting flood water flows and levels are used to design flood protection.

Studies on extreme events as diverse as floods, earthquakes, nuclear accidents, forest fires and stock market crashes show that the mechanisms that lead to extreme events are often different from the mechanisms behind the smaller events. Self-reinforcing feedback loops kick in after some threshold is exceeded, multiplying the magnitude of a disaster. Extreme floods are not extensions of small, medium and large floods, and need to be analyzed and understood separately. There are fewer observations for floods with a higher return period, as they are more rare. Using these observations to estimate river flows and flood levels for extreme events requires making assumptions and can lead to different outcomes.

There are other problems with the flood risk approach that is now used in many countries. Many costs and benefits of floods are difficult to express in money—casualties, loss of national heritage or psychological impacts, which makes cost-benefit analysis as a decision tool problematic. Moreover, models that are used to determine flood hazards and damage are based on incomplete data and information, contain simplifications and inadequately address uncertainties. Further, mathematical flooding probabilities are different from people’s risk perceptions, leaving a gap between the protection people want and what is provided.

Although engineers and economists have good reasons to follow codes of practices and professional standards, in the process of creating optimal flood protection such as embankments, diversion canals or early warning systems, the view of the larger picture with all its uncertainties is often lost.

Policy-makers readily accept the recommendations of engineers and traditional risk analysts and show the people that with government investments they are now safe. Yet, the focus on single solutions such as embankments means that people are not protected against or prepared for extreme events at all. Embankments are known to produce complacency, leading to risky decisions and actions such as building closer to a river.

Taking the Holistic Approach to Planning

One solution is to take a more holistic approach that acknowledges the existence of many uncertainties. The word “resilience” is often used in this context. A resilient flood management approach looks at the entire system of flooding and people—not just at flood protection projects—and consists of measures and policies that allow a society to continue functioning and able to recover in the face of extreme floods. It might also include what is now called ecosystem-based adaptation where emphasis is on “living with floods.”

An important element of a resilience approach is to take into account what happens when flood protection fails. What happens when embankments overtop and the city floods? Can people evacuate? Do they have fresh drinking water? Is the power supply of critical infrastructure ensured? Can emergency services access the area? Do people have the capacity and means to rebuild their houses and continue earning income after floods?

Resilience also means that developing flood protection is not a one-time event. Societies need to remain resilient into the future. The climate will change, societies will change, and we need to learn and keep adapting. This approach should also include flood experts who need to adopt an adaptive flood analysis method.

Flooding is a natural event. Floods become disasters because of human involvement. It will never be possible to avoid flooding. However, a holistic approach can make societies resilient and better deal with extreme events.

This perspective piece is based on research carried out by the author and his colleagues at the National University of Singapore. The author would like to acknowledge Prof. Robert Wasson for some of the ideas expressed here.