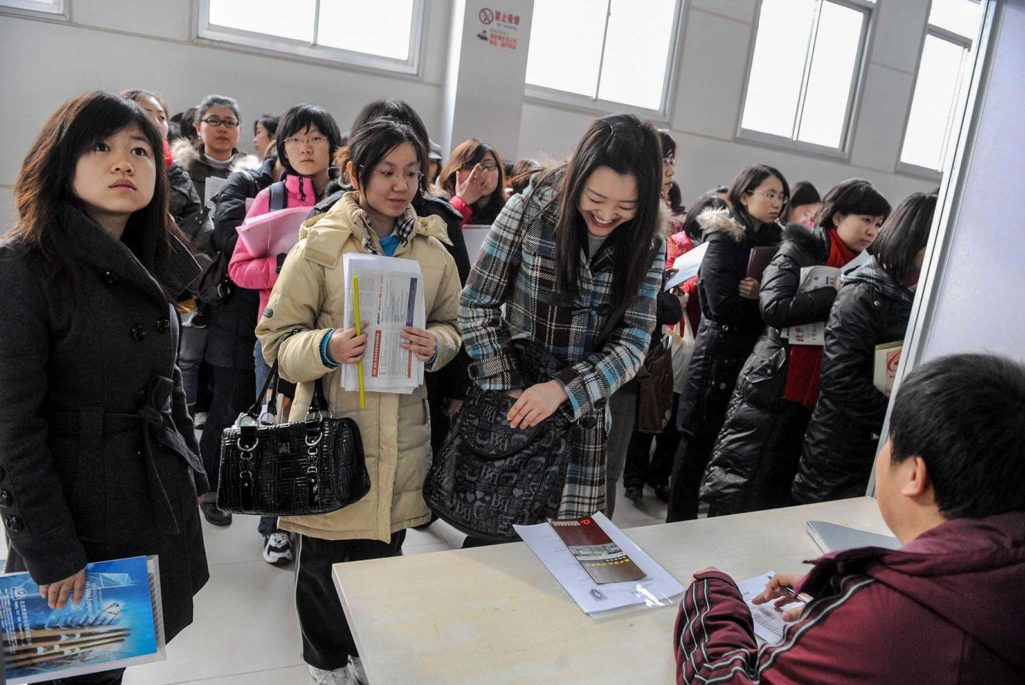 Chinese women job seekers stand in queues to enquire about job vacancies at an employment fair for women in Beijing. China has among the highest female-to-male labor participation rates in Asia.

China has made significant progress in narrowing the gender divide in its labor market over the past few decades. As a result, it has among the highest female-to-male labor participation rates in Asia (81.6 percent in 2013) and one of the narrowest earnings gaps, according to a recent report by the Asian Development Bank and the International Labour Organization.

The importance China has placed on gender equality in the labor market is underscored in its five-year development plans and government legislation and policies relating to the labor market. These include the Law of the People’s Republic of China on the Protection of Women’s Rights and Interests, which was passed some 25 years ago and according to which, gender discrimination in employment is prohibited.

These endeavors notwithstanding, as China’s growth model changes, it is undergoing multiple transitions that are having complex implications on gender parity in the labor market, according to the report.

The structural transition refers to the shift in national production away from the primary sector to the manufacturing and services sectors. This transition began in the 1950s but really gained momentum in the 1990s with migration from the rural areas mainly to the coastal provinces in the east. While this transition affected both men and women, the shift in employment to the secondary sector was greater for men than it was for women. As a result, the lowest productivity sector (primary sector) has a greater share of women’s employment. Moreover, even those women who shifted into the secondary sector are concentrated in the lowest-paid sectors such as textiles and apparel.

The market transition, which is characterized by features such as the decline of state-owned enterprises in urban areas, started in 1978 and is ongoing. One of the key elements of the transition was the shift to market mechanisms for employment and wage setting from a planned system. This also resulted in an increase in gender wage gaps and discrimination. The wage gap reached 33 percent in urban areas and 44 percent in rural areas, and more than 90 percent of these gaps were estimated to be due to gender wage discrimination.

The growth transition refers to the shift in policy toward less dependence on export-led growth and a greater growth emanating from domestic demand. This has been a policy initiative since the early 2000s but has been strongly emphasized in recent years. Service sector employment has increased owing to this transition. According to the report, there is a high degree of gender segregation in the service sector as women are disproportionately based in low-wage areas such as hotels and catering services, domestic services and in retail. It is also difficult to monitor and enforce labor laws in the service sector.

Lastly, China is experiencing a demographic transition, with a population that is aging rapidly. In the past 15 years, its elderly dependency rate has increased by about 40 percent; and while in 2010, there were 178 million people over the age of 60 in China, the number is expected to increase to 340 million by 2030 (or 25 percent of the population) and 440 million by 2050. The increased demand for eldercare as Chinese society ages is likely to be predominantly met by women. The report notes that gender norms assign women greater responsibility for unpaid domestic work, and in this context, that is likely to increase the gender gap in unpaid work, which is two hours and 24 minutes per day already.

Preparing for the Future

When compared to the significant strides made by China in reducing gender gaps, selected Asian economies haven’t fared as well. In South Korea, for example, the women-to-men labor participation rate stood at 69.5 percent in 2013; and in Indonesia, the ratio stood at 61 percent. Elsewhere, India and Pakistan had women-to-men labor force participation rates of just 33.8 percent and 29.7 percent respectively.

These include improving and rethinking the provision of care; adopting measures to address gender segregation in the labor force; addressing gender wage discrimination; expanding social and labor protection for workers that will benefit women; and collecting and disseminating gender-disaggregated data and undertaking specific research studies to address knowledge gaps.

Chris Miller Associate Professor at the Fletcher School at Tufts University
URL: https://www.brinknews.com/trends-impacting-the-gender-divide-in-china/
Get ahead in a rapidly changing world. Sign up for our daily newsletter. Subscribe
​​