When We Talk About Human Trafficking, We Also Need To Talk About Tech. Here’s Why. 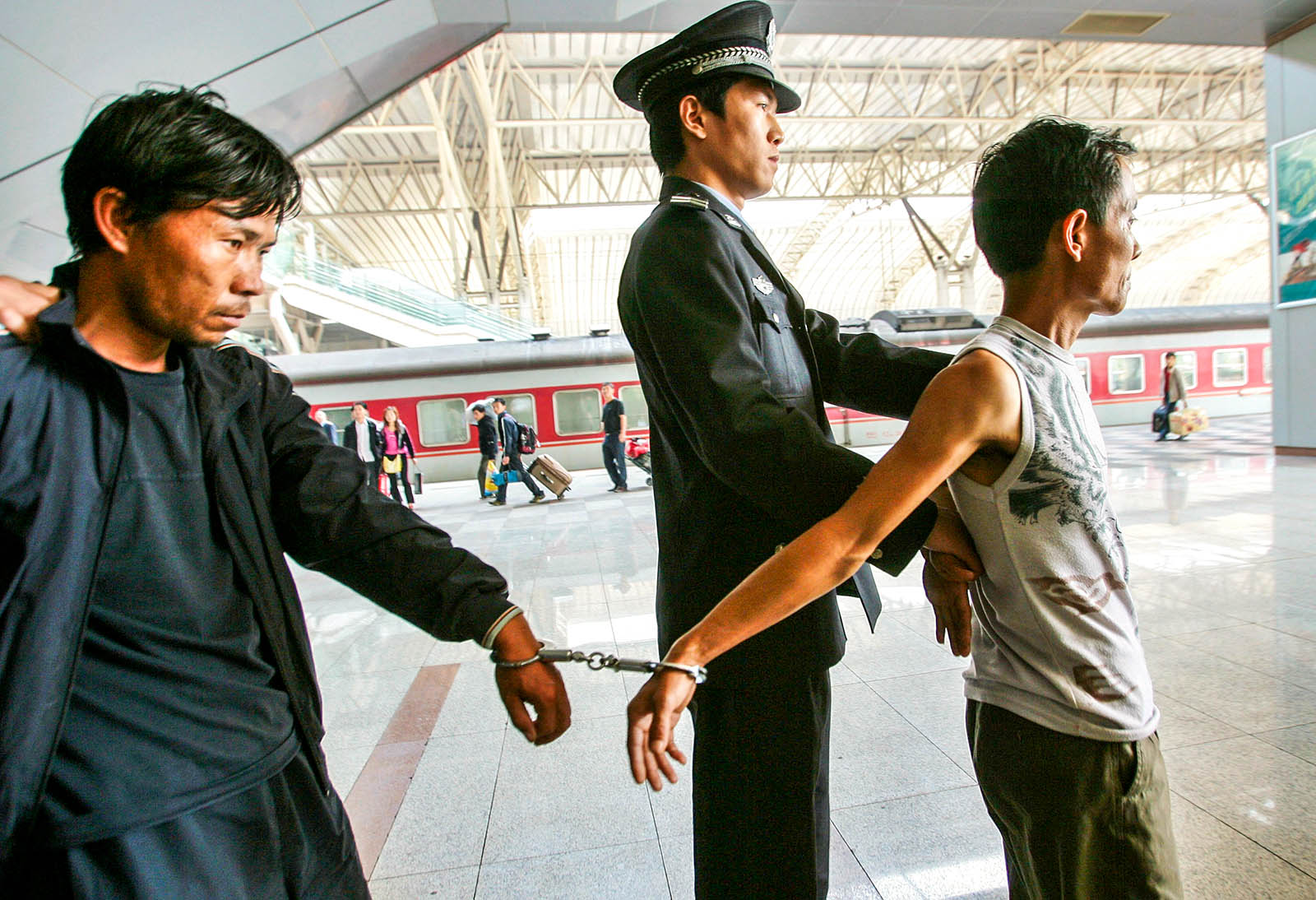 Police escort men suspected of being involved in the abduction and sale of women at the Nanjing Railway Station in Jiangsu Province, China. Legitimate businesses have expanded and changed with new technology—but so have illicit businesses.

Human trafficking is illicit, abusive and violent. But a key feature of human trafficking that many overlook is how it resembles the supply chains of legitimate businesses.

Human trafficking criminal groups do not all operate in the same way. In fact, they typically mirror the trade practices of legitimate businesses and are deeply influenced by the history, culture and trade traditions of the region from which they originate. Legitimate businesses have expanded and changed with new technology. Has technology also transformed human trafficking?

Over a decade ago, an analysis comparing the supply chains of human trafficking groups operating out of China and the Russian-speaking criminal groups working out of the former Soviet Union revealed that there were striking differences in the ways that the two groups operated their supply chains. These differences ultimately affected the levels of violence toward the victims, the profits generated and the disposal of profits. These models persist to this day. In fact, the integrated supply model seen in China has seriously benefited from the new technologies available to illicit entrepreneurs.

The Chinese criminal groups operated according to a trade and development model. In supply chain terms, this means that the Chinese groups ran an integrated business model from the start of the supply chain, where the people were recruited, to their point of exploitation. For example, a wiretap placed on a brothel in suburban Washington, D.C., recorded phone conversations that went back to Fujian Province, revealing links between trafficked girls and their home communities from where the traffickers also originated. The same criminal group controlled the victim from the point of recruitment to the point of exploitation, maximizing profits and funding further investment and development.

In contrast, Russian-speaking organized crime groups follow the natural resource model: The criminals in these groups treat women as they do natural resources. Russia, throughout its history, has never been a country of traders. Instead, they made large profits through the sale of natural resources, such as timber and furs. Post-Soviet crime groups—whether small specialized trafficking networks or multifaceted crime groups—do not operate with an integrated business model. Women are often acquired for resale to intermediaries and other crime groups, who will then exploit their services in lucrative markets with affluent consumers.

Therefore, new technologies do not significantly benefit the Russian-speaking traffickers, given that their focus is on short-term profits rather than building enduring businesses, as with the Chinese. In this respect, the illicit trade in Russian-speaking women for sexual exploitation mirrors Russian licit trade, which relies on the sale of oil, gas and minerals. Furthermore, like Russia’s legitimate economy, the money from human trafficking generally does not return to the country for investment and development but usually remains overseas.

Human Trafficking in the Age of Online Platforms and Social Media

This analysis was done in the period before human trafficking went online. Yet, recent indictments reveal that the Chinese groups continue to operate as they did in the past—with technology merely facilitating the established trade practices. There is no fundamental change in the supply chains.

So what role do online platforms play in human trafficking in the digital age? For one, online platforms and social media have opened new opportunities for traffickers to adopt these technologies and use them to expand. They make both the recruitment of victims and the delivery of trafficked girls and women to customers easier. The anonymity and the speed of the Internet combined with encrypted social media have allowed the trafficking business to expand in recent years—reaching larger numbers of potential victims and customers.

A recent analysis done by DARPA, for example, analyzed sexual advertisements posted for brief periods within the deep web—the part of the web not searchable through conventional search engines such as Google. It found that “over a two-year time frame traffickers spent about $250 million to post more than 60 million advertisements,” explains Larry Greenmeier in Scientific American. This extensive advertising budget can be explained by the large numbers of victims and the high profits made.

Do our current laws properly define the crime of human trafficking as it relates to the use of the Internet, social media and other forms of technology?

But has this growth been accompanied by a transformation of the supply chains?

Illicit Supply Chains and the Internet

The recent indictment of a large Chinese trafficking network, operating in sixty cities in the United States, Canada and Australia from 2015 until its shutdown in late 2018, provides an answer.

The investigators examined websites, advertisements, phone communications and social media to understand the network. The Chinese crime group used the website supermatchescort.com—a domain subsequently seized by the Federal Bureau of Investigation—as well as affiliated websites to traffick Chinese women across multiple jurisdictions. Within each city, a Chinese member of the organization would control the women, and all elements of the business were conducted online or through social media. A single individual in Guangzhou, China, according to the indictment, allegedly coordinated the Chinese members of his criminal networks dispersed across three countries.

“Dispatchers used a computer program to schedule and track all of the prostitution dates,” explains a press release from the United States Department of Justice. “This computer program had a customer database that logged more than 30,000 customer phone numbers with details from previous dates.” As in the past, alleged proceeds of this crime returned to China. This is aligned with the trade and development model—just done on larger scale, thanks to the Internet.

This massive case reveals that technological innovations have helped tech-savvy human traffickers to scale their businesses, but ultimately, the supply chains do not appear to have changed over time. Traffickers merely exploited technological advances to expand their activities, recruit more victims and service more customers.

The growth of human trafficking as a result of technology demands a range of policy changes to stem the progression and advancement of this problem. As stated above, the fundamentals of supply chains within criminal networks have not necessarily changed, but how each stage in the chain is executed has shifted due to developments in technology. As such, a multistakeholder approach in addressing these crimes is critical. We must bring together specialists with specific skill sets to address the multifaceted complexities of this crime.

When thinking about how to craft new policy—policy that will tangle with all the complications of the modern world of technology—as well as improving existing legal frameworks, it is crucial to consider including language around technologically facilitated crimes in these statutes. Do our current and proposed laws properly define the crime of human trafficking as it relates to the use of the Internet, social media and other forms of technology? Would including technology-focused language in laws help in prosecuting and addressing these crimes?

In addition to stakeholders within traditional anti-human trafficking communities, computer scientists, tech companies, tech startups and entrepreneurs must be further engaged in anti-trafficking dialogues in order to better understand current and emerging technologies and how they may be used to facilitate human trafficking. It is important for these key coalitions to come together to comprehend the mechanisms and challenges created by technology and mitigate illicit activity within supply chains given their individual expertise. Universities can also play a role by training the next generation of anti-human trafficking leaders in computer science, engineering, and related tech-focused departments.

These anti-human trafficking stakeholders, through expanding public-private partnerships, can come together and effectively design the best public policy interventions.

Carolina Klint Risk Management Leader, Continental Europe at Marsh
URL: https://www.brinknews.com/when-we-talk-about-human-trafficking-we-also-need-to-talk-about-tech-heres-why/
Get ahead in a rapidly changing world. Sign up for our daily newsletter. Subscribe
​​