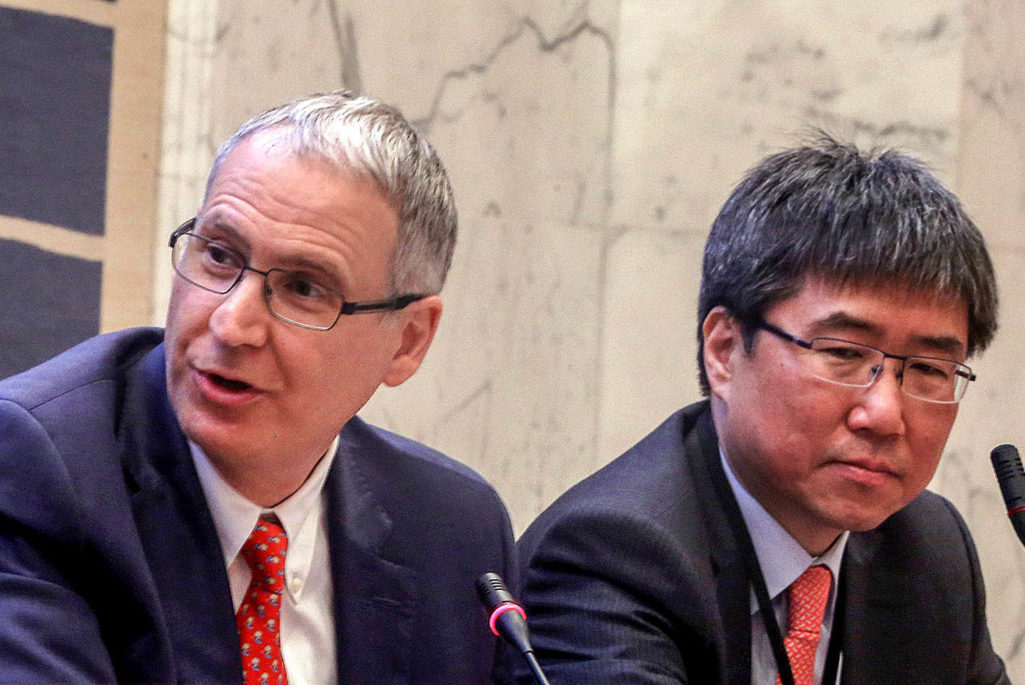 Oussama Kanaan (L) from the International Monetary Fund (IMF)-Middle East speaks as Ha-Joon Chang from Cambridge University listens during the Path to Economic Diversification in Kuwait and other Gulf Cooperation Council countries conference, in Kuwait City, on May 16,2016.

The role of industrial policy and active state participation in national development is much debated. While the conventional view, quite clearly, is that the state should stay as far removed from the economy as possible and let the market take its course, there is another school of thought that believes the state has a key role to play in shaping the economic development agenda. Supporters of this view believe the state should play an active role in economic development through policies including, but not limited to, infant industry protection, export promotion, and improvements in productivity, particularly when nations are at an early stage of development.

In the first of a two-part interview (part two will run next Wednesday), BRINK Asia spoke with Ha-Joon Chang, one of the strongest proponents of this school of economic thought and author of several policy books, including Kicking Away the Ladder: Development Strategy in Historical Perspective, about the relevance of industrial policy for developing Asian economies and the challenges faced by them. In 2013, in a poll conducted by Prospect magazine, Chang was ranked as one of the three most influential economists in the world after Paul Krugman and Amartya Sen.

BRINK Asia: In an environment of subdued economic growth and trade both globally and in Asia, do you think active industrial policy is even more important in developing Asian economies?

Ha-Joon Chang: I do think it is more rather than less important. When trade is steady, there are plenty of opportunities and even if an economy is not that competitive, it may be able to ride that wave. But if the world economy is stagnant and trade is not growing, then competition is tougher as everyone wants a share of the pie, which is not growing that much, and that is why you need more active industrial policy rather than less.

Through history, in every era, the fastest growing economies were the ones that practiced forms of protectionism and had a strong industrial policy, be it Britain between the mid-18th and the mid-19th century, the U.S. and Germany from the late 19th to the early 20th century, or the East Asian economies of Japan, Taiwan and South Korea in the late 20th century to China today. Without active industrial policy, economic growth has a limit. Countries need to move up the value chain; free market approaches have not proven to be very effective in helping countries achieve this.

BRINK Asia: This almost seems to be the era of grand free trade agreements (FTAs)—is their importance for economic growth and development justified, or exaggerated?

Even in the short run, there will be winners and losers within each country. While overall FTAs may benefit the signatory countries, they imply very different outcomes for different people in those countries. It is assumed that, once trade patterns change, people can move across sectors and find new jobs and eventually they can benefit, but this doesn’t always happen. Say you sign an agreement with a developed country and your machine tools industry gets destroyed, in theory the workers in that industry could be employed by the agriculture sector or the textile sector, but they may not have the necessary skills to make the transition.

But my main problem with FTAs is that, even in the short run, the supposed benefits are actually tiny. As a proportion of the overall output of the countries involved, the numbers (in terms of additional GDP) thrown about are 1 percent or less than 1 percent. Recently, when Canada and the EU signed the FTA, people talked about this agreement being a major boost to the economies, and the EU was advertising that it is going to gain significantly, but when you translate the numbers to the proportion of the overall EU GDP, it was not even 0.1 percent. It is very common to impress people with big figures, but as a proportion of the overall output of the economies involved, the increment is nothing.

‘Through history, in every era, the fastest growing economies were the ones that practiced forms of protectionism.’

Separately, there is often talk of how FTAs can benefit developing countries, as these countries will be required to implement domestic economic/financial reforms; but these reforms almost always relate to the scrapping of different kinds of subsidies, the opening up of capital and financial markets and a roll back of the state from any kind of interventionism. Such reforms are not necessarily a good thing as [they] limit[s] the policy tools at the disposal of developing countries. Of course, developing Asian countries need reforms, but we need to understand what reforms they really need as opposed to blanket opening up of the economy.

BRINK Asia: What do governments in developing Asian economies need to prioritize in order to maintain healthy levels of socioeconomic development?

Ha-Joon Chang: I would say there are two elements: The first is industrial policy. Keep remembering that the free market is not going to allow you to become a rich country. The exact tools that you need to use may have changed over time, but the principle of infant industry protection is still valid and you need to find ways to upgrade your economy through a judicious mixture of government intervention and private sector initiatives.

Secondly, developing Asian economies need to think about developing their social welfare systems. At the moment, social welfare spending is marginal in most developing Asian countries and there is a huge deficiency. These countries are managing somehow because growth is relatively fast and people can still rely on extended families; and governments provide subsidies on necessities such as fuel on some ad hoc bases, but these are patchy and nonsystematic at best. Developing countries in Asia really need to think about establishing some forms of welfare state from earlier on, so that they aren’t faced with negative circumstances later. I would cite the example of my home country South Korea—in the OECD, it has the second smallest spending on social welfare (as a proportion of GDP) after Mexico, but people managed to cope with adverse things in their lives (e.g., unemployment, poverty, old age) till the 1990s as our economy was still growing at a rapid pace and we had extended family networks. Besides, many companies were willing to provide job security. Since the Asian Financial Crisis of 1997-8, however, the country has—partly voluntarily and partly due to external pressure—carried out market-oriented reforms that have reduced job security, and over time family structures have also broken down, weakening the social support system. One indicator I’d like to bring to your attention is the suicide rate, which in Korea was about 10 (per 100,000 people) in 1995, which was slightly below the OECD average at the time, but has now increased to about 30, the highest in the world.

The trouble is that a welfare state cannot be developed overnight, as it requires a lot of changes in policy such as in tax structures and the like. Had Korea thought of all this about 20 years ago, we would have been in a much better position. Poorer economies in Asia should not repeat this mistake and should start thinking about building a welfare state [from] now.

BRINK Asia: What is your biggest concern for Asian economic growth over the next few years?

Ha-Joon Chang: As this is a diverse region with countries ranging from Japan and Singapore at the top and Cambodia and Nepal at the bottom, we cannot easily generalize, but I think the biggest challenge in the next few years will stem from a slow global economy. Growth in the rich world has stagnated since the Global Financial Crisis of 2007/8—as of the end of 2015, only four of the rich Western economies (Europe and North America) had higher per capita income levels than they had before the crisis—the U.S., Canada, Germany and Sweden. Of these, the fastest-growing was Germany, and its per capita income grew at a rate of 0.8 percent per annum between 2007-2015. To put that in perspective, in Japan in the so-called two lost decades from 1990-2010, per capital income grew at 1 percent per annum. The U.S. growth rate was 0.4 percent per annum during this period.

The world economy is experiencing an unprecedented period of stagnation and in the meanwhile a lot of the policies that the U.S. and the EU have used to deal with the crisis have created more sources of financial instability. Quantitative easing has led to stock market bubbles and housing market bubbles, even in some developing countries (as it became cheaper to borrow from overseas). With the U.S. election, the Brexit vote, the rise of the new right in Europe and the contained but ongoing economic crisis in the Eurozone, there is a great degree of uncertainty. Dealing with these potential instabilities and the ongoing stagnation will be the biggest challenge for Asian economies.