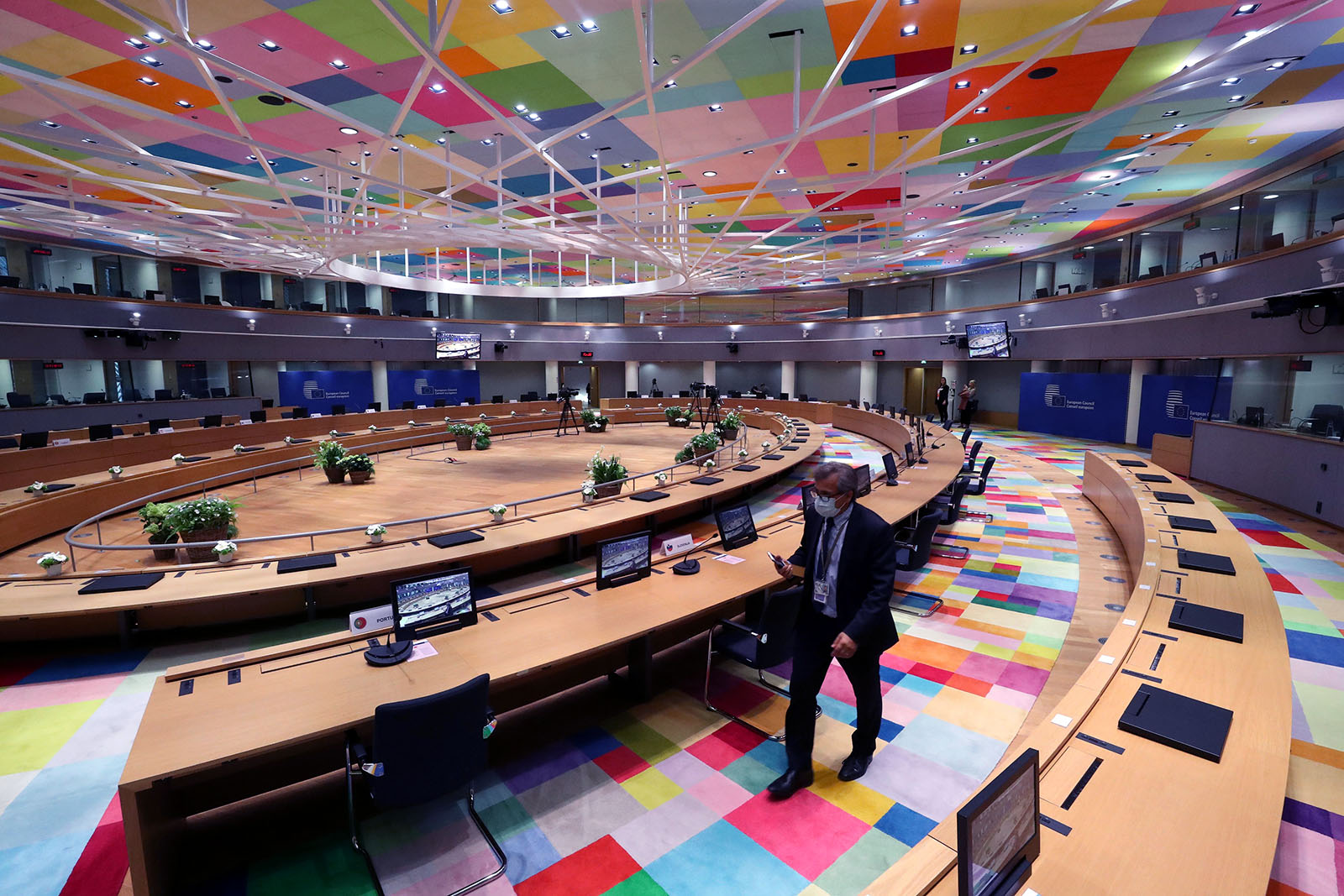 The EU leaders summit at the European Council headquarters in Brussels, where the recovery plan was discussed. The EU deal on the COVID-19 recovery fund represents a fundamental shift in the European construction.

This is part of BRINK’s leadership series, in which we invited a few CEOs and leaders to reflect on the year that just passed and what lies ahead.

2020 has been a year of both record-breaking shock and decisive milestones. To look back in a comprehensive way would take a whole book, if not an entire library. However, there is one development that stands out when it comes to the European project, both in terms of its pragmatic implications for recovery and its historic significance: the EU recovery instrument.

The EU deal on the COVID-19 recovery fund, agreed upon on principle by the European Council in July of this year, represents a fundamental shift in the European construction. The EU must ensure it is used to boost Europe’s sustainable growth potential in the medium term, and 2021 will be decisive for how sustainable Europe’s recovery will be.

The fund was born of the skeleton set by a Franco-German proposal just a couple of months earlier and expanded upon by the European Commission. It represents the first instance of large-scale EU borrowing in order to fund grants, which fundamentally means EU debt for inter-regional transfers.

This recovery instrument is not only a landmark step forward, but a sign that when push comes to shove the EU is willing to stand together if the circumstances so require it. It also has very real consequences for the European economy and its recovery from the pandemic-induced shock.

First, the joint-borrowing at the EU level provides insurance against catastrophic events to EU member states. This is fundamentally positive; it has clear stability benefits for the entirety of the union in the wake of the pandemic.

Fiscal capacity concerns have not been as relevant an issue as was first feared, given a decisive ECB response that helped ensure all member states have continued access to the capital markets. That said, the implications of Next Generation EU did contribute to this continued cheap access, helping assuage market fears, in as far as the unveiling of the Franco-German proposal (that clearly exposed German support for joint-borrowing and a grant-based instrument) had a noticeable impact on sovereign spreads for the periphery countries.

Piloting a Sustainable Recovery in 2021

Continued market access at reasonable costs ensures that there is no need for the EU recovery fund to be a counter-cyclical instrument, and despite recent focus on speedy disbursement, this is unrealistic. The time for countercyclical support has passed, after all, while the EU looks to schedule 70% of commitments for 2021 and 2022 — only a quarter of disbursements should arrive during that period.

Instead, the fund should be geared towards a clear objective: piloting a sustainable recovery.

The EU’s growth potential has been severely harmed by a pandemic that has done much damage to its productive structures — physical, human and financial capital. The European Commission, in its autumn forecast, expects an euro area contraction of 7.8% in 2020, while that of the entire EU is expected to be 7.4%.

Next year’s forecasts expect growth of around 4%, both in the euro area and the EU; however, it will take several years for GDP to return to 2019 values, and for the scars that COVID-19 leaves to heal.

Even as retaining market access has allowed member states to respond to the first phase of the crisis, the differences in fiscal capacity will likely come back into the limelight once we fully transition into the final phase: investing in the recovery. The substantial fire-power of the EU instrument can remedy the existing differences between member states, preventing those with higher debt ratios from having to keep their response timid.

It must focus on harnessing the power of the EU for a medium-term growth strategy focused on quality spending.

With that in mind, much remains to be done — and to be decided. The European Council deal was sufficiently skeletal, the details to be laid-out between the EU’s co-legislators under the Ordinary Legislative Procedure, based on an initial European Commission proposal. The European Parliament and the Council are still engaged in trilogue negotiations that shall determine the final construction of the instrument.

Three primary areas can still be addressed and would substantially improve its nature.

The first — perhaps the most important — relates to its objectives. Absent the immediate counter-cyclical motivation, this instrument provides ample resources to lay the foundations for sustainable growth with quality spending. The green and digital transitions have been at the center of the EU Commission President Ursula von der Leyen’s term from the outset — work on the European Green Deal and green industrial policy can be recycled for ideas.

While trade-off exists between immediate economic benefits and green objectives, there are many initiatives that can boost a speedy recovery and ensure these wider societal goals are supported.

The second relates to its governance. Integrating Next Generation EU into the EU structure — instead of creating an ad hoc intergovernmental body—- was the correct decision, with the Commission piloting the ship.

Negotiators should take the time to further strengthen its governance mechanism. This should include additional careful monitoring to avoid corruption (not unknown to EU funds), with a conscientious European Parliament oversight to ensure funds fulfill their political objectives.

The current proposal gives the Commission a central role, but the European Parliament should insist on regular hearings and reports. Political accountability will help ensure funds are employed to power green and inclusive growth.

Third, better governance should also be conducive to better implementation at the national level. A recurring issue of EU funding and EU policies more general is that execution at member state level differs significantly. It is easy to see how window dressing and box ticking will be employed at the expense of future-oriented spending. The EU money is too important to not substantially boost investment spending for which multipliers are higher and growth effects bigger.

Next year’s forecasts expect growth of around 4%, both in the euro area and the EU. Growth is also expected for 2022. However, it will take several years for GDP to return to 2019 values, and for the scars that COVID-19 leaves to heal.

The time frame depends on the EU’s ability to halt the damage to the productive tissue, preserve the EU’s growth potential and invest in a sustainable recovery that will strengthen wider societal goals. The EU recovery fund should be at the heart of this, and actions in 2021 will matter enormously for the recovery in years to come.

Marta Domínguez-Jiménez contributed to this article.

Til Schuermann Partner and Co-Head of Oliver Wyman’s Risk & Public Policy Practice
URL: https://www.brinknews.com/2021-the-year-of-the-eu-recovery-fund/
Get ahead in a rapidly changing world. Sign up for our daily newsletter. Subscribe
​​