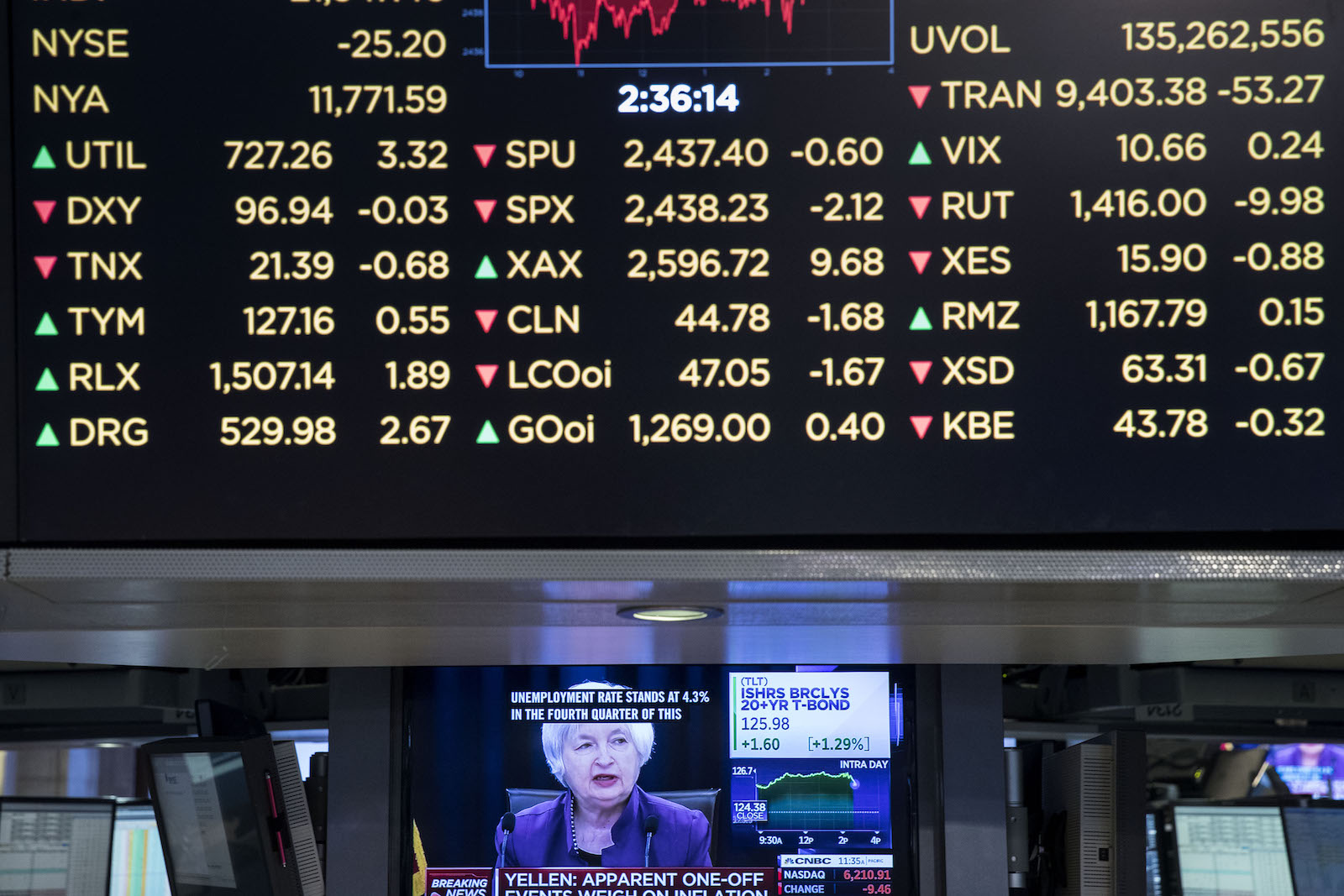 Traders work as a television monitor displays former Federal Reserve Chair Janet Yellen announcing the Fed's decision to raise interest rates on the floor of the New York Stock Exchange. Asian central banks are not marching to the same tune as the Fed, which is unusual.

Asian central banks are not marching to the same tune as the Fed, which is unusual. There are two key differences with the current U.S. Fed rate hiking cycle—the first is how shallow and long this cycle has been, and the second is how much Asian central banks have decoupled from it.

Only six of Asia’s nine central banks have raised rates since the Fed began raising them at the end of 2015 (Exhibit). In fact, in our opinion, the People’s Bank of China is even shifting to a policy of easing rates. This is in sharp contrast to the 2004-2006 hiking cycle, in which eight of nine Asian central banks followed the Fed with rate hikes.

Moreover, even where Asian central banks have raised rates, none of the hikes come close in magnitude to the Fed hike of 175 basis points (bps). Since December 2015, the average net increase in Asian policy rates is near zero; in 2004-2006, it was 183 bps, or two-fifths of the total 425 bps of Fed rate hikes.

Reasons for the Decoupling

There are both positive and negative reasons for the decoupling. On the positive side, Asia’s move to more flexible exchange rates has given its central banks more leeway to have monetary policies that are independent from the Fed. Also, Asia has built up robust balance of payments to negate capital outflows; indeed, the three countries—India, Indonesia and the Philippines—whose central banks have raised rates this year are the only three in Asia running current account deficits.

Note: The central banks that have raised rates in the current Fed hiking cycle are China, South Korea, India, Indonesia, Malaysia and the Philippines. The only central bank that did not hike in the 2004-06 Fed hiking cycle was the Bank of Japan. We exclude Hong Kong and Singapore from the second row, as strictly speaking the HKMA and MAS are monetary authorities, not central banks, and they primarily manage the exchange rate, not interest rates. The increase in interest rates refers to the net increase over the period, i.e., the sum of the rate hikes and cuts. Interest rates for China are the seven-day repo rate in the “2015-present episode” and the one-year bank deposit rate in the “2004-06” episode; for Hong Kong and Singapore we use the three-month Hibor and Sibor. Source: CEIC and Nomura

Six Reasons for a Growth Slowdown

There are six reasons why a growth slowdown in Asia lies ahead: a global growth deceleration, a slowing China, increasing trade protectionism, the global electronics downswing, high oil prices and tighter domestic financial conditions. On the negative side, for several Asian countries, although interest rates are low, there is not much urgency to hike; led by China, Asian growth is showing increasing signs of slowing, and business confidence is dimming.

Unlike the U.S. economy, which is growing well above potential due to late-cycle fiscal stimulus, Asia is in the late stage of a financial cycle burdened by high debt and, in some countries, overextended property markets. Moreover, financial contagion from the global emerging markets turmoil is tightening domestic financial conditions in many Asian countries, notably in India and Southeast Asia.

Signs of a Global Chip Downcycle

The upswing in the global electronics cycle since 2016 was longer-lasting than previous ones, and some attribute this to new sources of demand from the cloud, AI, cryptocurrencies and autonomous motor vehicles. However, if history is any guide, global tech demand is highly cyclical. The danger is that the steep rise in chip prices leads to overproduction, and as demand weakens, there is a pronounced downswing.

Warning signs are accumulating. Growth in global billings of U.S.-headquartered semiconductor equipment manufacturers plunged in July, which is a good leading indicator of global semiconductor shipments and broad electronics demand. Year-on-year growth in exports of semiconductors and electronics more broadly has turned down in Singapore and Taiwan, but is holding up in Korea and Japan—although in Japan, a cautionary sign is the sharp rise in the inventory-to-shipment ratio of electronic parts and components. A pronounced downturn in tech would particularly hurt Taiwan, as electronic products, broadly defined, make up 46 percent of industrial production, compared to 27 percent in Singapore, 22 percent in Korea and 20 percent in Japan.

Weighing up on the one hand a strong U.S. economy, likely continued Fed rate hikes and global quantitative easing soon to start unwinding against incipient signs of Asian growth slowing and large tail risks around trade protectionism on the other, who would want to be an Asian central banker? Our outlook is that Asian central banks will be increasingly marching to different tunes in H2.

The Philippines. After 25 bp hikes in May and June, the central bank upped the ante, hiking by 50 bps on August 9. We expect two more 25 bp hikes, one later this month and the other in November. The economy has a large positive inflation gap, its Monetary Conditions Index (a measure that combines interest rates and exchange rates to give a broader measure of monetary conditions) has loosened, and its fiscal policy is turning more expansionary and is vulnerable to balance of payments pressures.

Indonesia. Bank Indonesia has already hiked 125 bps this year, and we expect a further 25 bp hike later this month, primarily because of balance of payments pressures. There is room for greater fiscal stimulus.

South Korea. We expect a 25 bp hike on November 30 and then an extended pause. While inflation is low and the external position solid, we expect the Bank of Korea to hike in order to create room to cut in the future, given that the policy rate at 1.5 percent is very low. An expansionary fiscal policy in H2 gives it a window to normalize.

Thailand. Similar to Korea, the policy rate is only 1.5 percent, and despite a huge current account surplus and low inflation, we expect the Bank of Thailand to use the current window of stronger GDP growth to raise rates by 25 bps later this month to build room to cut in the future. But we then expect rates to be on hold over the rest of this year and next.

Tightening, but At Risk of On Hold

Taiwan. We expect a token 12.5 bp rate hike on December 20, to 1.50 percent, on higher inflation and to create room to cut in the future, but as growth cools, the risk is no hike.

Singapore. We expect a slight increase in the appreciation slope of the S$/NEER policy band in mid-October, but the entrepôt economy is very exposed to global demand and financial markets, so there is a reasonable risk of no policy change and even a small risk to a re-centering of the band lower if EM turmoil deepens.

On Hold, but At Risk of Tightening

India. After delivering 25 bp hikes in June and August, we expect a long pause as growth eases, but the risk is another hike in October if core inflation remains stubbornly high, oil prices spike or balance-of-payments pressures intensify.

On Hold, but At Risk of Easing

Malaysia. The sharp drop in inflation, slowing growth and tighter fiscal policy all point to Bank Negara staying on hold—but the risk is a cut if growth slows too sharply.

China. Across the board, monetary, fiscal and regulatory policy easing is underway. In contrast to the 2008-09 large-scale easing, it is being announced in a lower-key way, but nonetheless stands to be significant, given policymakers face simultaneous downturns in the economic and financial cycles at a time when external uncertainties are on the rise.

Asia’s export growth strength has, until now, helped to negate the impact from developed markets’ monetary policy normalization, but if this growth cushion starts to give way, as we expect, watch for Asia’s market risk premium to rise more sharply. Solid growth in the U.S. coupled with slowing growth in Asia makes policymaking more challenging. Given the current situation, we judge that macro policies in Asia are set to become more uneven than they have been for a long time.

Asia’s balance of payment fundamentals—current account, forex reserves and external debt—are much healthier than they were 20 years ago, but the powerful effects of EM financial contagion from Turkey and Latin America to Asia should not be underestimated, particularly when the Fed is raising rates and Asian growth is slowing. This is a time for Asian policymakers to be extra prudent and the business community to hope for the best, but be prepared for the worst.

Til Schuermann Partner and Co-Head of Oliver Wyman’s Risk & Public Policy Practice
URL: https://www.brinknews.com/a-divergence-expected-in-asias-macro-policies/
Get ahead in a rapidly changing world. Sign up for our daily newsletter. Subscribe
​​