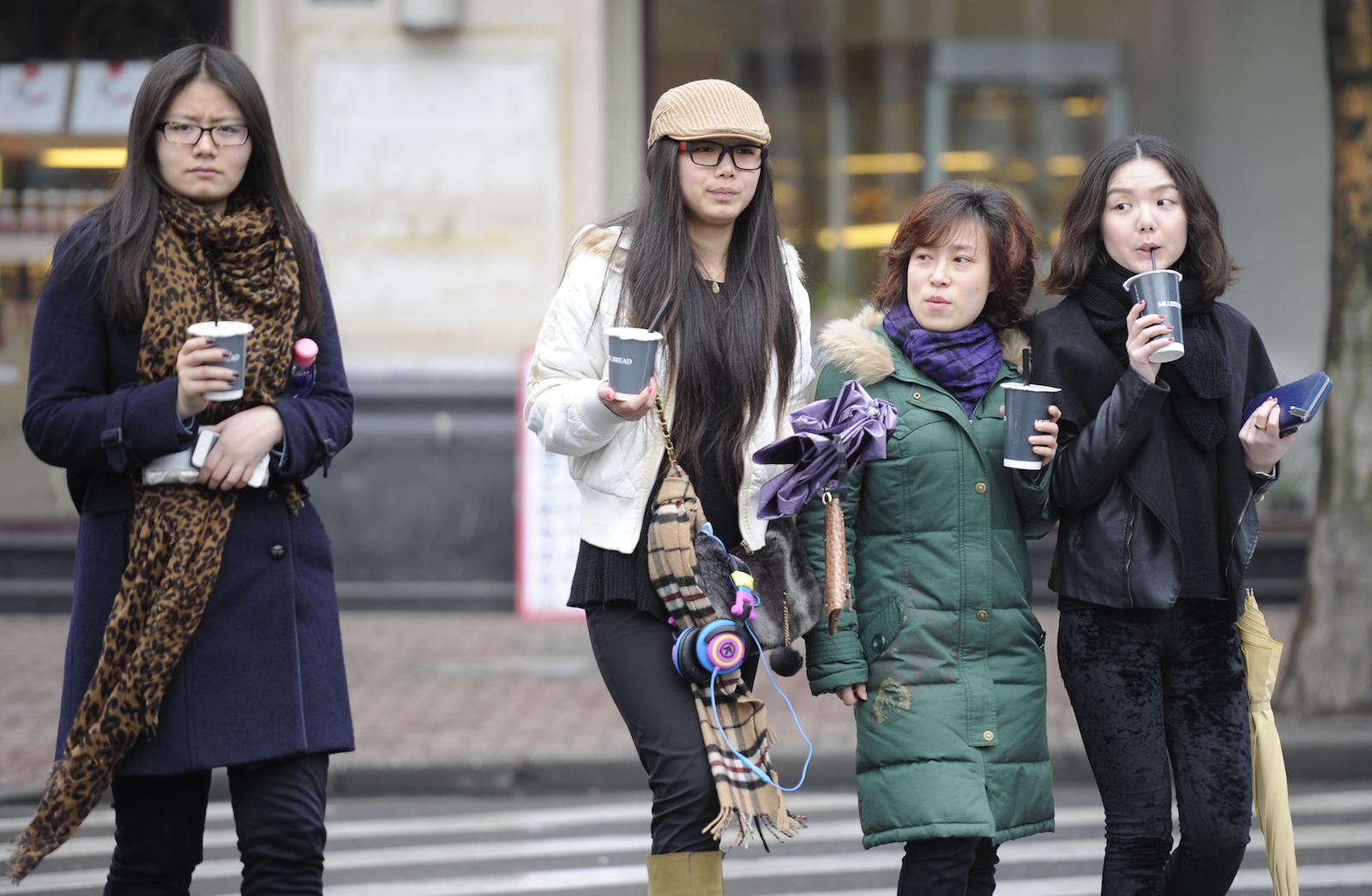 Working women carry coffee in Shanghai. Evidence shows a decline in female workforce participation in some key Asian economies. It is imperative for Asian governments to put in place initiatives and legislation so women will have the same opportunities as men in the labor force.

This is the final article in a special series on women in the workforce.

Asia is home to a population of around 4.5 billion people, with an average female population of 49.8 percent. However, the region is failing women—and in the process, the promise of economic prosperity—by failing to address the barriers that keep many women from the workforce and that society and institutions reinforce daily.

It is imperative for Asian governments to put in place initiatives—and potentially even legislation—so women will have the same opportunities as men in the labor force. For those women already in the workforce, policymakers in Asia must endeavor to create conditions conducive to their professional growth, which ultimately reflects in the greater representation of women in senior corporate positions.

Asia performs particularly poorly on both these counts. There are some changes afoot, but given the scale of the challenge, they only address the proverbial tip of the iceberg.

Addressing Gender Disparity in the Workplace

Most Asian societies have traditionally perceived women as being central to the family unit. Consequently, women have been unable to devote their undivided focus and efforts toward their own career growth, as they have been seen as responsible for managing households and being the primary caregivers—both to children and to their aging family members. This continues to inhibit their ability to join the labor force and poses many barriers to growth for women who are in the workforce, chief among which is their growth into senior roles.

Several Asian companies still have all-male boards, and almost all have boards on which men are in a majority. The problem is particularly acute in East Asian economies, including South Korea, Japan, Taiwan, China and Hong Kong.

Many Asian governments are aware of the issue and have taken steps to facilitate equal opportunities for women in the labor force and parity in the workplace.

In India, for example, women make up less than a quarter of the workforce—among the lowest globally. Additionally, its gender pay gap is the highest globally, with Indian women making 34 percent less than men in hourly wage. The Indian government has introduced several initiatives to address this. India’s Maternity Benefit (Amendment) Act 2017 increased the maternity leave period to 26 weeks from an earlier 12 weeks. However, while this law is well-intentioned, it is likely to deliver unintended consequences. A recent report estimates that 1.1 to 1.8 million women stand to lose their jobs by March 2019 due to this law. This illustrates the complexity involved in policymaking. For the policy to be widely successful, companies would need to restructure the foundations of their operations and budgets to ensure they are built not only for male employees but for all employees.

Elsewhere, Singapore enjoys a relatively high rate of female employment at 72 percent, and there has been a gradual reduction in the gender pay gap. Additionally, Singapore plans to double its share of women on company boards to 20 percent by 2020, from 9.9 percent in 2017. Singapore’s women-empowerment schemes have yielded desired outcomes, but more efforts are necessary to reshape traditional mindsets and discrimination. Singapore has established a Tripartite Alliance for Fair and Progressive Employment Practices to encourage fair employment practices, but it has yet to enact this into law, and no current provisions exist to allow monitoring.

One helpful step employers could take is offering flexible working conditions. Eighty-two percent of women in Singapore cite a lack of flexible working conditions as a top reason for quitting their jobs. Sixty-eight percent of women are unable to work from home at their present jobs, with only 14 percent being able to use this option occasionally.

Now, consider China. Globally, China boasts more self-made female billionaires than any other country. However, this doesn’t imply an inclusive growth transformation in the country. The number of women in the labor force has declined over the past decade, and women earn 22 percent less than men for the same work. Additionally, efforts toward increasing maternity leave allowances have delivered unintended results, considering these additional operating costs must be borne by companies. For equal-opportunity policies to be successful, companies must be committed to structural change.

In Japan, the Shinzo Abe administration tried to address the disparity in management roles in 2013 by reviving an older target of at least 30 percent of management positions in companies to be occupied by women by 2020. The targets were lowered considerably to between 7 percent and 15 percent for the public sector and the private sector by 2021.

Malaysia has a target of women occupying 30 percent of directorships in the private sector; South Korea is providing subsidies to companies that give more than 30 days of child care leave in a year; and we see a similar pattern play out in countries across the region. Governments and policymakers have attempted to address the disparity, but the initiatives are largely not met with success either because there is opposition to these initiatives from some quarters, companies find ways to work around regulations or the legislation is simply ineffective or toothless.

Lessons from Down Under

Australia has witnessed a notable reduction in the gender pay gap—from 18.5 percent in 2014 to 14.1 percent currently, and it also has a relatively high number of women in the workforce. Gender equality has been an important area of focus for successive governments in Australia. Programs such as ParentsNext provide monetary support to parents of children aged below six to help them fulfill their study and work goals. This is a tangible benefit.

Additionally, Australia has a Workplace Gender Equality Agency, whose mandate is to improve gender parity in the workplace. The agency works with companies and provides advice and practical tools to help companies eliminate gender discrimination, “including in relation to family and caring responsibilities.” It also helps companies comply with the reporting requirements of the Workplace Gender Equality Act.

Across the Tasman, New Zealand has also actively addressed issues of gender discrimination in the workplace. It has a legal framework that provides protection against many kinds of discrimination. It also has frameworks in place for equal pay for women, for the prevention of discrimination based on sex and has plans for regulations for equal employment opportunities.

Moreover, New Zealand has also seen significant success in the increase in the share of women working in the public sector. Jacinda Ardern, the prime minister of New Zealand, has said in the past that she would like the public service sector to be a catalyst for greater gender parity. “Our view is that if we can’t demonstrate that level of leadership at the center and heart of government, then how can we call on the private sector to do the same? We want to send a message to our CEs [chief executives] that we see it as a priority,” she said.

A Long Way To Go

Study after study has shown the economic benefits of having more women in the labor force and equal opportunities and pay. They also point to the positive impacts of gender equality on health, education and social welfare in general. A recent International Labour Organization report, for example, clearly indicates the importance of addressing gender equality for Asian governments. If Asian economies are able to reduce the gender gap in the labor force by 25 percent, this alone can add a further $3.2 trillion to Asia-Pacific’s cumulative GDP—a figure equivalent to India’s annual GDP.

Collaborative efforts by governments and employers must therefore be undertaken to ensure workplace diversity and skills development for women. This and more must be done for the equal opportunities for and contribution of women to economic growth and sustainability.

For this to happen, Asia’s governments must lead.