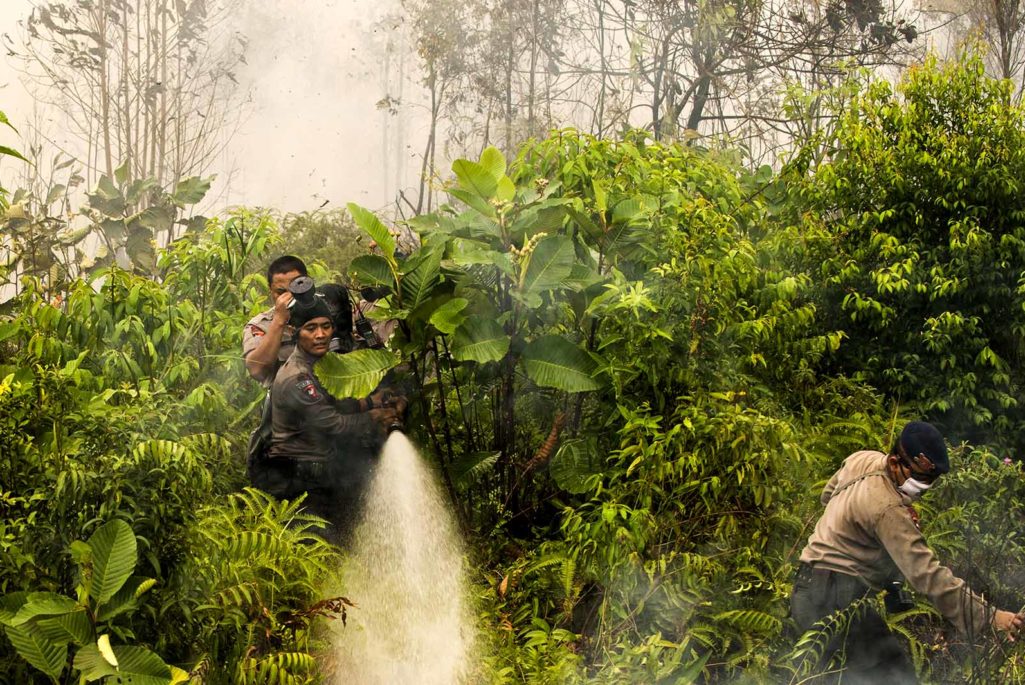 In this photograph taken on September 24, 2015, Indonesian policemen extinguish a fire on a vast area of burning peat land forest. Under pressure from its neighbors to stop the annual haze, Indonesian President Joko Widodo has pledged to crack down on companies and individuals behind the burnings, which are a cheap but harmful way of clearing vast tracts of land for plantations.

Environmental conservation and sustainable economic development have long been critical issues for Southeast Asia, given the region’s wealth of natural resources. These issues hit critical mass after the 2015 Haze—the term given to the transboundary, life-threatening pollution resulting from the forest and peat fires in Indonesia.

Since then, positive, urgent steps have been taken by governments, corporations and civil society organizations alike to minimize the chance of such a haze engulfing the region again. While the immediate concerns may have been addressed, there is much to do to address the sustainability issue holistically and to find solutions for the long term. This was the key takeaway from the 4th Singapore Dialogue on Sustainable World Resources, organized by the Singapore Institute of International Affairs (SIIA), at which experts spoke about the complexity of the challenges confronting policymakers.

For example, at one end of the supply chain are smallholder farmers, who have limited knowledge of the implications of their actions, limited financial resources to boost productivity, and are completely reliant on the land for their livelihoods.

As such, even well-intentioned decisions by governments cannot be made on an ad-hoc basis without considering their implications on these farming communities.

Masagos Zulkifli, Singapore’s minister for the environment and water resources and a speaker at the forum, laid out the principal dilemma confronting the region: “Extreme advocates of sustainability may come across as arguing against all forms of development—for example that every inch of forest must be saved in the same state as today. This extreme position is difficult to defend because it ignores the real and legitimate needs of the present generation.”

For example, the palm oil sector brings important economic benefits to countries, such as Indonesia, where it contributes an estimated 2 to 2.5 percent to the gross national product, and Malaysia, where it is the fourth-largest contributor to gross national income, Zulkifli said. The sector also supports the transition of many communities out of poverty and significantly improves the lives of smallholder farmers. “We are all acutely aware of the social and environmental costs that an expanding agroforestry sector has brought,” Zulkifli said.

The social costs include conflict between corporates and indigenous communities over land allocation, while the environmental costs relate to the cultivation of palm oil at the expense of the rainforest.

A patchwork of challenges relating to land rights, transboundary pollution and haze, environmental degradation, resource dependency and, of course, economic development means that policymakers have to get the balance right by making agroforestry supply chains more sustainable and by undertaking forest conservation efforts.

Over the past couple of years, countries in the region—led by Indonesia, which was both home to the worst forest and peat fires and suffered the greatest damage—have made progress in tackling transboundary haze by tracking and containing hotspots.

“We decided no fire, no haze anymore, to end it in 2016—and we succeeded,” said Alex Noerdin, governor of South Sumatra in Indonesia. The focus now is on restoring the forests and peatland destroyed by the fires in South Sumatra the year before.

The province’s Green Growth Plan, which was initiated two years ago, brings together private companies and non-government organizations in an effort to realize a sustainable landscape. The plan involves the development of a coordination structure, with modeling of different development scenarios of the land-based sector and their economic, social and environmental impacts.

Some see sustainability as a box-ticking exercise. There is a need to start seeing it as a long-term strategy.

One of the key requirements in Indonesia, according to Nirarta Samadhi, country director for Indonesia at the World Resources Institute, is capacity building. This includes the collection and dissemination of valid data and information to all stakeholders in the supply chain so that decisions can be made effectively, without jeopardizing the economic opportunities for small farmers.

While Southeast Asia strong steps toward protecting the environment after the 2015 haze, the theme of addressing the problem over the long term pervaded the forum.

While some people still see environmental protection and sustainability as a box-ticking exercise or an expense, there is a need to start seeing sustainability as innovation and as a strategy, and that is starting to happen in the region, said Simon Tay, Chair of SIIA.

This is happening in Malaysia, where numerous initiatives have been taken to strike the right balance between resource use and conservation. Dato Sri Dr. Haji Wan Junaidi bin Tuanku Jaafar, Malaysian minister of natural resources and environment, said the great challenge for developing countries has been to protect resources while striving to meet the social needs of economic development.

Malaysia’s initiatives include sustainability certifications for agro-products such as timber and palm oil; increased investment in research and development to enhance agricultural yield; and efforts to find more efficient ways of using natural resources (such as using palm oil for biofuels).

That said, the paucity of financial resources remains a challenge, and developed countries and other agencies have a role in ensuring that adequate financial, technological and technical capacity is available to countries that are implementing forest conservation efforts, Junaidi bin Tuanku Jaafar added.

The SIIA—in partnership with the United Nations Environment Programme Inquiry, and with support of the Monetary Authority of Singapore, the country’s central bank—launched the Collaborative Initiative on Sustainable Finance in Singapore, which will establish a baseline of sustainable finance in Singapore.

Under this framework, banks could ask corporations engaged in the agroforestry sector for more transparency before providing them with loans—for example, by asking questions relating not only to commercial issues but also to sustainability practices and certification.

Speaking about the initiative, Tay said that as a regional hub, Singapore has to recognize its responsibilities and push for greater sustainability measures, “not only in Singapore, but through the links and levers we have from here in trade and finance.”

According to Minister Zulkifli, the role of private sector financing is going to become increasingly important. If, for example, the flow of private capital to projects engaging in unsustainable business practices is checked, these businesses could face insufficient financing. “As a leading capital market in the Asia-Pacific, Singapore is well poised today to play an influential role in making this happen,” he added.

The panelists were unanimous in their view that the onus for driving sustainable development cannot fall on national governments alone, and that all stakeholders—including sub-national governments, private companies, non-government organizations, farmers and buyers—along the supply chain of products need to work in unison to achieve optimal outcomes.

That is almost always easier said than done, particularly because all stakeholders have a different vision for what the optimal outcome would be.

However, it is clear that regional governments recognize the magnitude of the challenge. Importantly, some large companies have begun to accept that they cannot afford to focus on commercial sustainability alone.