Asia’s Sweet Spot of Solid Growth To Stretch Into 2018 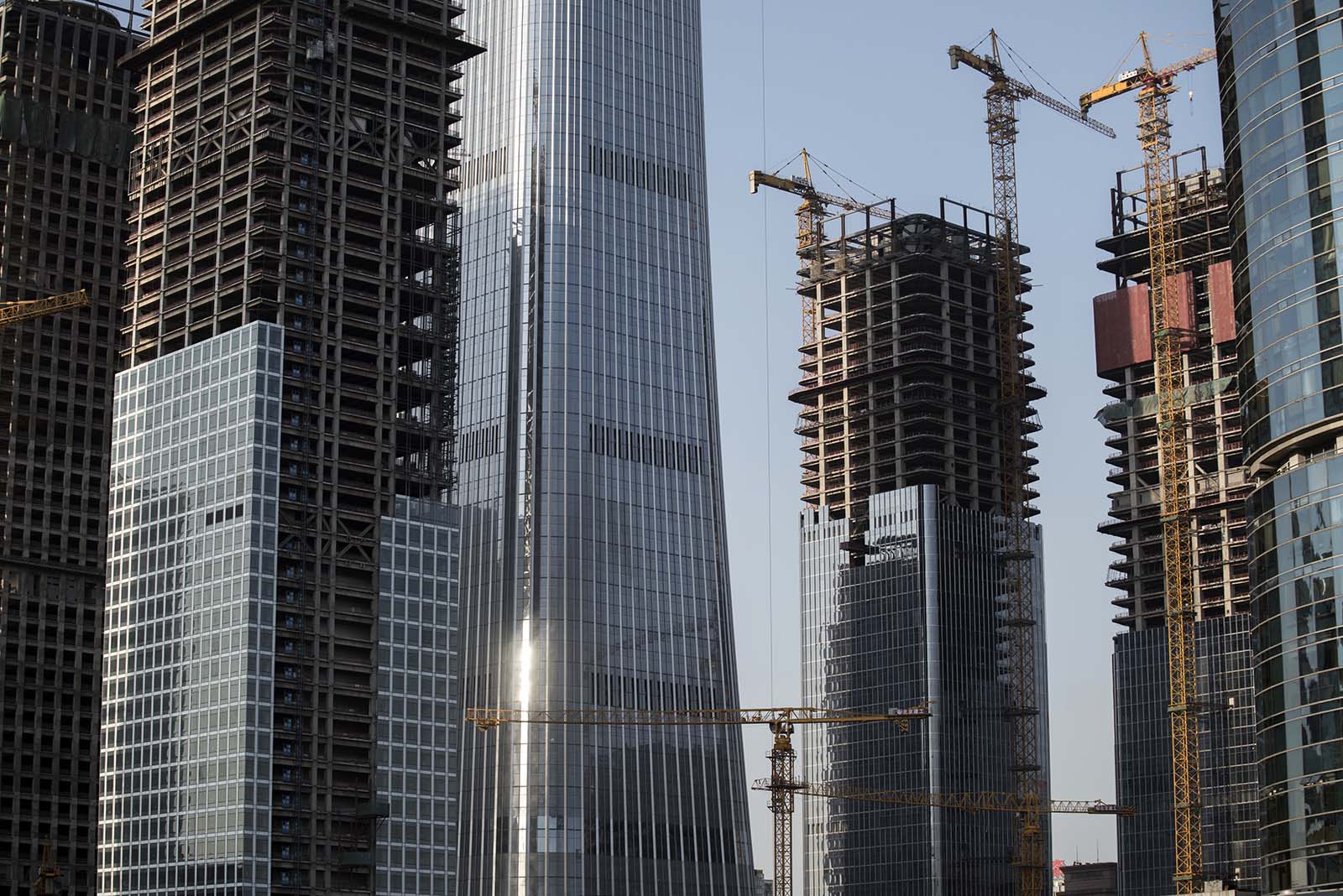 High-rise buildings stand under construction in Beijing's central business district in 2017. For Asia, the year was a sweet spot of solid growth.

A year ago, Nomura’s Asia 2017 Outlook report was titled “Sailing Into the Storm.” It warned that structurally slowing economies, many in a late-stage credit cycle, were vulnerable to more inward-looking U.S. policies and high geopolitical risks.

We were wrong on a number of fronts. We missed Asia’s tech-led export revival. We under-predicted growth and over-predicted inflation in developed markets (DM), and this Goldilocks backdrop of strong growth and low inflation allowed the world’s major central banks to normalize monetary policy in a very gradual, predictable fashion, helping to keep G10 bond yields low and sustain strong capital inflows and the hunt for yield in Asia.

China’s growth was a bit stronger than we had forecast, and Beijing successfully reinforced financial market stability, tightening controls on capital outflows. On U.S. trade protectionism, President Donald Trump’s talk turned out to be much worse than his actions, and markets became desensitized to geopolitical risk, especially regarding North Korea.

Far from sailing into the storm, Asia in 2017 saw a sweet spot of solid growth, low inflation, strong capital inflows, historically low interest rates, expansionary fiscal policies and a lack of external shocks. We expect this to stretch into 2018—but “stretch” is the operative word as we see a rising risk of a potentially painful snapback.

We forecast Asia ex-Japan’s aggregate GDP growth to rise from 6.1 percent in 2017 to 6.2 percent in 2018, but this masks growing divergences: faster growth in India, Indonesia, the Philippines and Thailand; stable growth in Malaysia, Korea and Taiwan; and slower growth in China, Hong Kong and Singapore.

First, Asian export growth should remain solid, buoyed by DM demand and a major global tech upcycle, which looks to be longer-lasting for Asia’s mainstay export—semiconductors—than previous cycles. This is due to an explosion in new sources of chip demand beyond simply new smartphone models, from cloud computing, artificial intelligence, big data and, dare we say it, miners of cryptocurrencies.

Second, capital inflows to Asia should remain strong as DM bond buying by the European Central Bank and the Bank of Japan—and by emerging market (EM) central banks via foreign exchange interventions—more than offsets the Fed’s quantitative tightening, keeping DM bond yields low and sustaining the hunt for higher yield in Asia.

Third, still-low inflation justifies Asian central banks keeping policy rates at, or near, record lows, while fiscal policies are expansionary. After almost two years of decoupling from the Fed, the Bank of Korea last month was Asia’s first central bank to hike rates in this Fed hiking cycle. In 2018, with inflation creeping higher, we expect others to follow—Malaysia (25bp in January), the Philippines (25bp per quarter and 100bp in total), Korea (25bp in Q3) and Taiwan (12.5bp in Q4)—but apart from the Philippines, all are less than the Fed (75bp) and keeping the level of Asian interest rates historically low. As for fiscal policies, we expect most to be expansionary (Hong Kong, Indonesia, Korea, the Philippines and Taiwan), a few neutral (China, India and Singapore) and contractionary only in Malaysia (H2) and Thailand.

We believe that 2018 will be the year that China starts to address its moral hazard problem, with banks and bondholders re-pricing credit and demanding a higher risk premium, causing a continued widening of spreads between high-yield and high-grade credit. We see a greater risk of a spike in China credit defaults and capital flight in 2018 than in 2017. We forecast CPI inflation to rise in nearly all countries, albeit from low levels and mostly due to higher oil prices.

However, Asia’s sweet spot looks stretched to us, and we warn of a rising risk that at some point there could be a potentially painful snapback. Asia’s high debt leaves it exposed to a global re-pricing of credit risk, possibly triggered by inflation surprises. Also, the recovery in Asian exports masks structurally weak private domestic demand in several economies, leaving the region more exposed than it may first appear to a number of downside risks that, on our count, outnumber the upside ones.

It is notoriously difficult to pinpoint the timing of a snapback, but if we were to venture our best guess, we would say Q2 and Q3 are the high-risk quarters. Looking further out, our fundamental view is that India, Indonesia and the Philippines are Asia’s new rising stars. We nickname them Asia’s “tiger cubs,” replacing Northeast Asia’s aging and debt-burdened tigers as the core of the region’s economic dynamism, with scope to lift potential output growth in excess of 8 percent. Our high-conviction and out-of-consensus calls for 2018 are:

China. We expect China to bite the bullet on the more painful reforms, leading to a long-lasting growth slowdown; yet, we expect inflation to rise and we see upside risks. Credit risk differentiation will be the big theme for 2018 in China. As China starts to address its moral hazard problem (that is, reducing the perception that the state will guarantee returns of risky borrowers), banks and bondholders will re-price credit risk, demanding a higher risk premium, causing a continued widening of interest rate spreads between high-yield and high-grade credit.

India. We are bullish about the Indian economy’s prospects in 2018 both cyclically and structurally. The economy is in the early stage of a cyclical recovery and will register growth of about 7.5-8.0 percent in the first half of 2018, and we see that as the start of a robust and enduring expansion.

Indonesia. We expect GDP growth in Indonesia to accelerate to 5.6 percent in 2018, driven by a doubling of growth in investment spending.

Philippines. We expect inflation in the Philippines to exceed the 2-4 percent target of Bankgo Sentral ng Pilipinas in 2018 and, in response, the central bank to hike rates every quarter, by a total of 100bp.

Hope for the Best; Prepare for the Worst

As compared with other EMs, we see Asia as less vulnerable to capital flight and an exchange-rate crisis due to its large buffer of forex reserves, relatively low external debt, and mostly surplus current accounts. There are some exceptions, of course. Hong Kong is the most exposed to this first risk category, but more through a spike in interbank rates rather than a breaking of the Hong Kong dollar peg. Malaysia also has relatively high exposure.

In contrast, Asia is much more vulnerable than other EMs in the event of a global re-pricing of credit risk. We have long argued that Asia’s Achilles’ heel is its outsized domestic financial imbalances. Our concern here is that if global asset managers reassess the risk-return trade-off on their investments in Asia’s relatively small debt markets, liquidity could quickly dry up, causing market credit spreads to widen sharply. This could set off a chain reaction in Asia’s domestic markets: a rise in credit defaults, a tightening of domestic financial conditions, asset price corrections, slowing growth and more disorderly deleveraging, completing the loop. A setback in China and U.S. trade protectionism measures, if they come to fruition, will also generally have a greater impact on most Asian EMs as compared to EMs elsewhere.

But “stretch” is the operative word, as the risk of a painful snapback happening at some point in 2018 is rising, given the region is now heavily indebted, financial markets are richly priced and the number of downside tail risks, on our count, far outnumber the upside ones. So enjoy the party but stay close to the door.