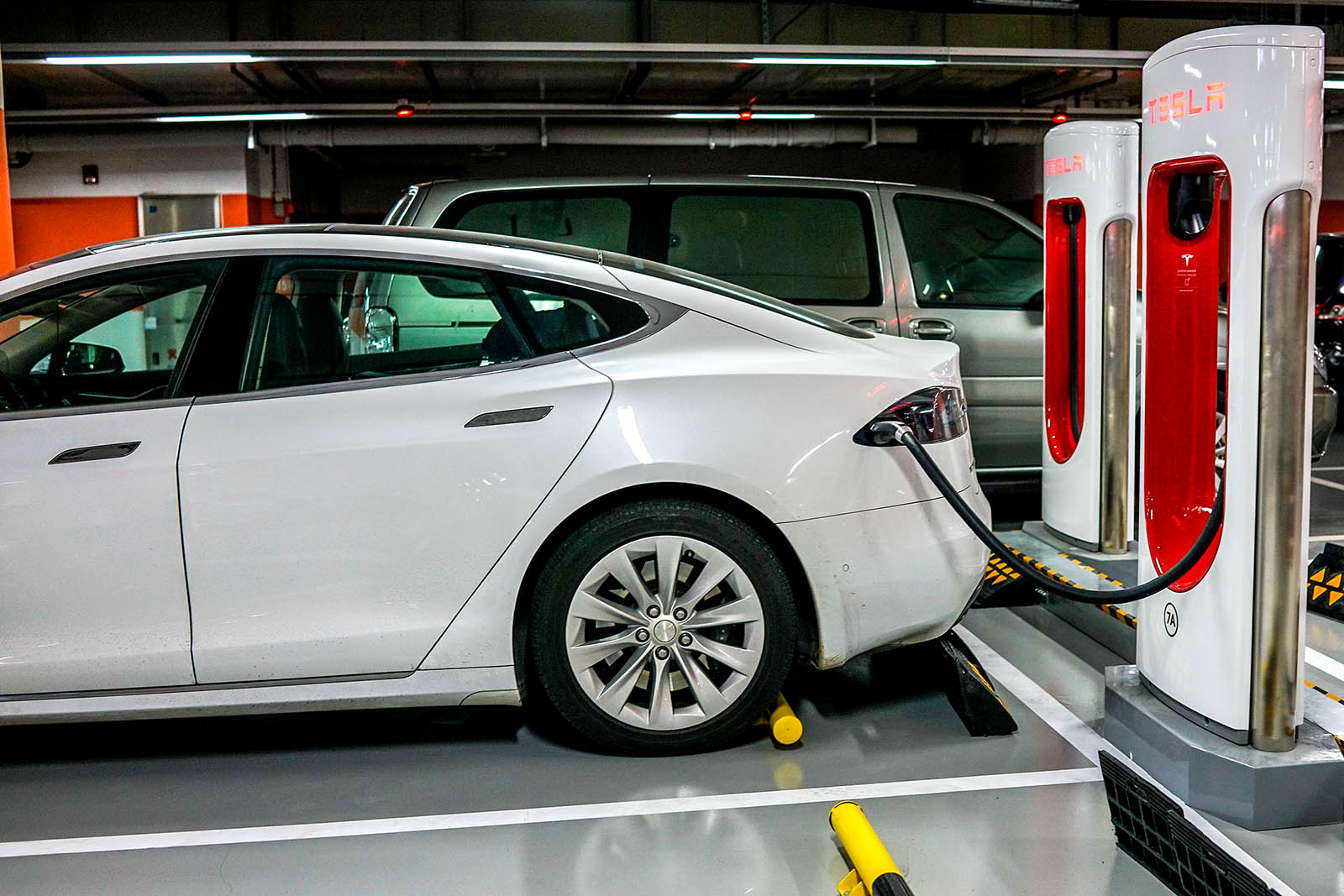 A Tesla vehicle parked at a charging station inside a mall in Shanghai, October, 2017. Tesla has reached an agreement with the authorities to build its own plant in China, putting it in the driver's seat in the world's biggest electric-vehicle market.

China tried to become a global motor hub with gasoline cars, but without success. Electric vehicles (EVs), however, may be different, since the industry’s youthfulness combined with an expected surge in car sales and government’s support may make China stand out as a global technology leader, not only in the automotive sector, but across the whole transportation industry.

China is the world’s largest producer of EVs. Globally, new registrations of electric cars hit a record in 2016 with over 750,000 worldwide, with China accounting for more than 40 percent of the sales, according to the 2017 OECD/IEA report on EVs. As modernization of factories eradicates old polluters and moves firms away from cities, EVs represent the greatest benefit to city-center pollution reduction.

China’s central government, the mayors of its cities, and the people in these cities are seeing the evidence of lower pollution as blue skies are returning. Some claim that the increase in electric vehicle use has resulted in the clear skies—but it’s more complex than that.

Today there are roughly 100 cars per 1,000 people in China; most forecasts anticipate this rising to about 300 by 2030, leading to a substantial car fleet increase. Some will be EVs powered by batteries, which need to be charged by electricity generated remotely—outside of cities. This power will be more frequently generated by oil and gas, rather than coal; though as Chinese economic growth has continued, the government has had to commission new coal-fired electricity generators, replacing older and dirtier systems.

In terms of pollution, all is not lost, as fuel oils have become much cleaner since 1990. The quantity of PM2.5 particles has been reduced, with the larger PM10 particles also being cut. The reduction equates to a cleaner atmosphere and to a reduction of chronic illness, as not only particulates but all pollutants have been reduced, especially the ozone-creating nitrogen-based exhaust gases. This is partly thanks to new standards for oil production quality and vehicle exhaust emission controls.

The Need for Scale

But despite this positive outlook, the slow electric car market uptake is largely influenced by the policy environment, according to the IEA. The scale achieved so far is small: The global electric car stock currently corresponds to just 0.2 percent of the total number of passenger light-duty EVs in circulation.

Electric vehicles represent a positive approach to city well-being. It will be the future in China soon, but not by tomorrow.

Electric vehicles still have a long way to go before reaching deployment scales capable of making a significant dent in the development of global oil demand and reduction in greenhouse gas emissions despite media and car manufacturers’ hype. However, the problems of limited battery capacity and recharging power could be a thing of the past if claims of an Israeli startup are to be believed. StoreDot has claimed that its FlashBattery technology can charge an electric car in just five minutes. It has promised to launch in the market in the next three years.

China continues to relax its business competition rules, with its aim to remove restrictions on all manufacturing operations, reflecting its economic confidence. An auto industry plan released last year envisages NEVs (new-energy vehicles) making up all the future sales growth in the country. China is considering ending production and sales of automobiles powered by gasoline and diesel in the future.

It has also supported the manufacturing of EVs, by local firms as well as joint ventures with global brands, though a year ago the government had clamped down on local, poorly built EVs. However BYD, Kandi and Hangzhou Changjiang are leading Chinese EV producers, and JVs with international firms continue to create new NEVs, creating a broad consumer choice.

Additionally, China is said to be considering easing joint venture rules for global EV manufacturers operating in the country. It wishes to reduce its dependence on oil and realizes the urgency with which it needs to clean up pollution if it is to meet its climate change targets.

Today, China is still largely dependent on coal to produce its electricity, but recent development shows that coal-fired electricity production has declined since 2013, coinciding with a major boom in renewable energy. It is projected to achieve its maximum level of CO2 emissions before its 2030 targeted deadline by displacing coal with renewables, nuclear, and natural gas. It also announced last year that it will invest $360 billion in renewable energy by 2020 and put aside plans to build 85 coal-fired power plants.

EVs represent a positive approach to city well-being by reducing local pollution, as do ride-sharing and working from home policies rather than commuting daily to a city office. It will be the future in China soon, but not by tomorrow.