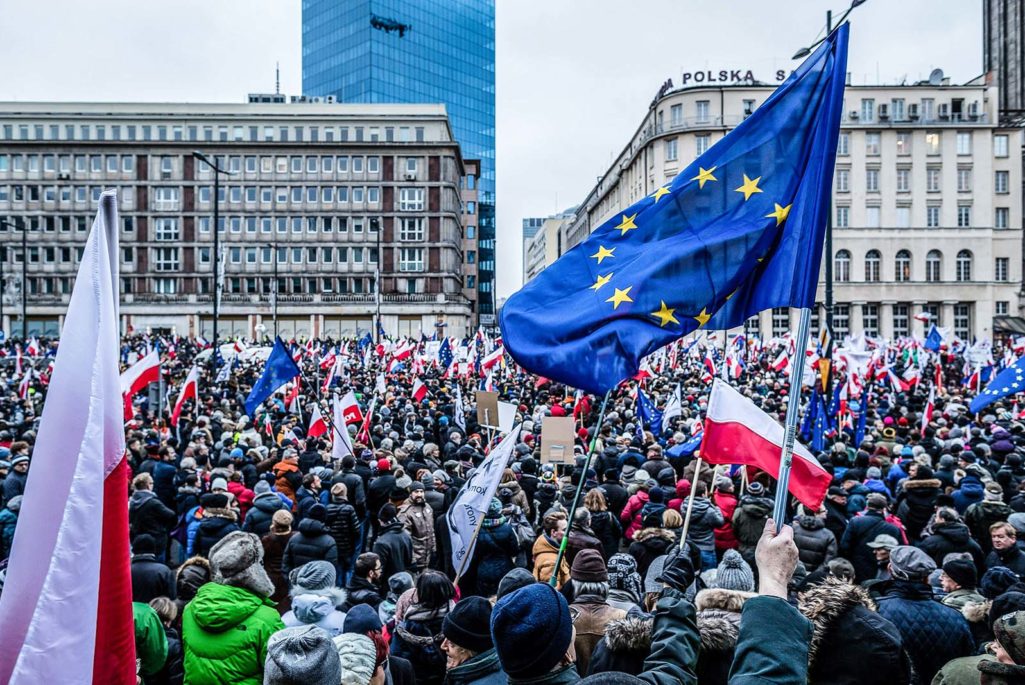 People wave European and Polish flags in the center of Warsaw as they take part in a protest against a new media law on January 9, 2016. Since returning to power in October, Poland's Law and Justice party has taken several controversial steps that critics have denounced as undermining the independence of both the media and the judiciary.

The mountain of 2016 outlook pieces in your inbox displays consensus on a global economy that is still growing, supported by accommodative monetary policies and the continued recovery from the Great Recession, but threatened by rising economic and geopolitical risks. Here are a few themes that have been underreported but could still be critical in the coming year.

During much of 2015, the focus of markets was on China and the risk emanating from emerging markets. Indeed, last week provided us with a powerful reminder that uncertainty about the path of the Chinese currency can still cause meaningful global tremors. I am still of the view that the renminbi (RMB) is fairly valued in terms of fundamental trade competitiveness and that a conscious policy of depreciation could be counterproductive for the Chinese government in the face of continued capital outflows. However, there is a growing concern in markets that the RMB could move significantly lower. From a global perspective, the risks are predominantly in the emerging markets dependent on Chinese markets for their goods (especially commodities) and where financial linkages with China are significant. Observers should be most worried about emerging market corporate debt.

However, political analysts tell a different story about the locus of risk in the world. In CFR’s recently released 2016 Preventive Priorities Survey, eight of the eleven most critical contingencies are related to events unfolding or ongoing in the Middle East. Whether the concern is Syria, rising tensions between Saudi Arabia and Iran, or a weakening of state control elsewhere in the region, it is hard to discount the Middle East as the leading source of risk to markets in 2016.

So, is there a disconnect between political risks and market expectations? For now, the answer seems to be no. Traditionally, a market discussion of these risks begins and ends with oil prices. With oil and other commodity prices at record lows, and with no evidence that Saudi Arabia or any other country has an incentive to cut production, the traditional channel through which Middle East turmoil infects markets—a spike in prices—seems disabled. That is not good for the major commodity producers, notably Russia and Brazil among emerging markets, but it is good overall for global demand. On the other hand, consistently low oil prices have exerted pressures on the fiscal and exchange rate policies of Saudi Arabia, exemplified by the drastic spending cuts in its 2016 budget and private investors’ increasing skepticism of the country’s ability to maintain its system pegging the riyal to the U.S. dollar. That said, if anything happens that undermines this confidence in steady, lower oil prices, it is hard to imagine that markets will continue to believe in this version of rebalancing.

The good news is that U.S. and European fiscal policies have become slightly more stimulative after years of cuts.

One of the themes I have highlighted recently in my blog is that we are reaching a period where central banks can no longer be expected to be at the vanguard of demand support and crisis response. Although the monetary policies of France, Germany, and the United Kingdom will remain accommodative, the era of strong central bank leadership since the onset of the Great Recession is coming to an end. The Federal Reserve has begun a process of gradual normalization and questions are arising about the power of—and political will for—additional quantitative easing (QE) by the Bank of Japan and European Central Bank (ECB). This means that fiscal and structural policies need to play a greater role in the event of a new global shock. The good news is that U.S. and European fiscal policies have become slightly more stimulative after years of cuts; the bad news is that there seems to be little appetite for additional moves, removing a potential support for global growth in a downside scenario.

The broader challenge to our capacity to address another economic crisis is rising populism, which appears to be a brake on government’s ability to act in times of crisis, particularly in Europe. Divisions over migration, market reform, and further integration in the European Union already have been reflected in elections in Greece, Spain, and Portugal, and in 2016 the British vote on “Brexit” is likely to roil markets whatever the outcome. In European creditor countries, populism has been reflected in opposition to additional economic support to the periphery. As a result, while European governments have in many cases responded by signaling a willingness to let fiscal targets slip, which will support demand—it raises the risk that pan-European policies will be paralyzed in the face of a new crises in the periphery of Europe. Greece will again be in the news in 2016, as the government faces growing political opposition to pension, tax, and other structural measures it has committed to undertake as a condition for further financing. The timing of promised debt relief from its European partners remains uncertain, and in any case a reduction of future debt service (after 2021) is not going to provide a meaningful spur to growth in the near term. All this suggests a “Grexit” from the eurozone could again be a market-driving issue. If European and global markets remain calm, Europe will continue its recovery. But any of a number of shocks—whether a hard landing in China, debt problems in Europe, or disruptions elsewhere—will create substantial pressure on policymakers at a time when the constraints on their ability to act are intense. For example, the Eurasia Group, as a result, lists Europe turning inward and the hollowing out of the transatlantic alliance as a major global risk, one not currently priced into markets.

Work by the staffs of the International Monetary Fund (IMF) and Bank for International Settlements (BIS) in the past year has made a strong case for concern with high levels of corporate debt and leverage, particularly in commodity-based emerging markets facing rising interest rates, capital outflows, and reduced demand for their goods. Many of these corporations have explicit state support—state enterprise debt in emerging markets is estimated at $800 billion—or act as if they have implicit backing. At this stage of the cycle, credit problems are likely to intensify, which will raise pressure on governments (many of which have limited capacity to take on additional debt) to step in or let these firms fail. This is a delicate balancing act, one which could easily entangle sovereigns that get it wrong. Add in Venezuela, where default seems inevitable; Greece, where a faltering adjustment program (and unrealistic expectations about debt relief) are likely to trigger renewed “Grexit” debate; and a growing debt crisis in Puerto Rico, and debt looks likely to be a dominant story for 2016.

There is a strikingly large range of forecasts among market participants on the path of the dollar this year, with some predicting a euro that weakens through parity with the dollar due to differential ECB-Fed policy. In real terms and since 2014, the euro has weakened as the dollar has strengthened (see chart below). Any further strengthening of the dollar is a threat to above-trend growth forecasts in the United States, though there is a natural stabilizer in place, as a strong dollar will be seen as a reason for a more gradual path of rate hikes from the Fed. At the same time, the relationship between a strong dollar and trade could become a political headwind, with renewed efforts by the U.S. Congress to punish perceived manipulators. This effort would be more likely to punish countries currently intervening to resist depreciation, such as Korea, than countries such as China that have traditionally been targets but are now depreciating.

In sum, 2016 looks set to be a volatile year in which geopolitics and hard-to-quantify policy dilemmas create significant uncertainty in markets. Policymakers will be asked to make tough decisions about where and when to intervene in markets at a time when their capacity to deal with crisis is increasing challenged, suggesting the road ahead could continue to be bumpy.

This piece first appeared in Global Economics Monthly from the Council on Foreign Relations.