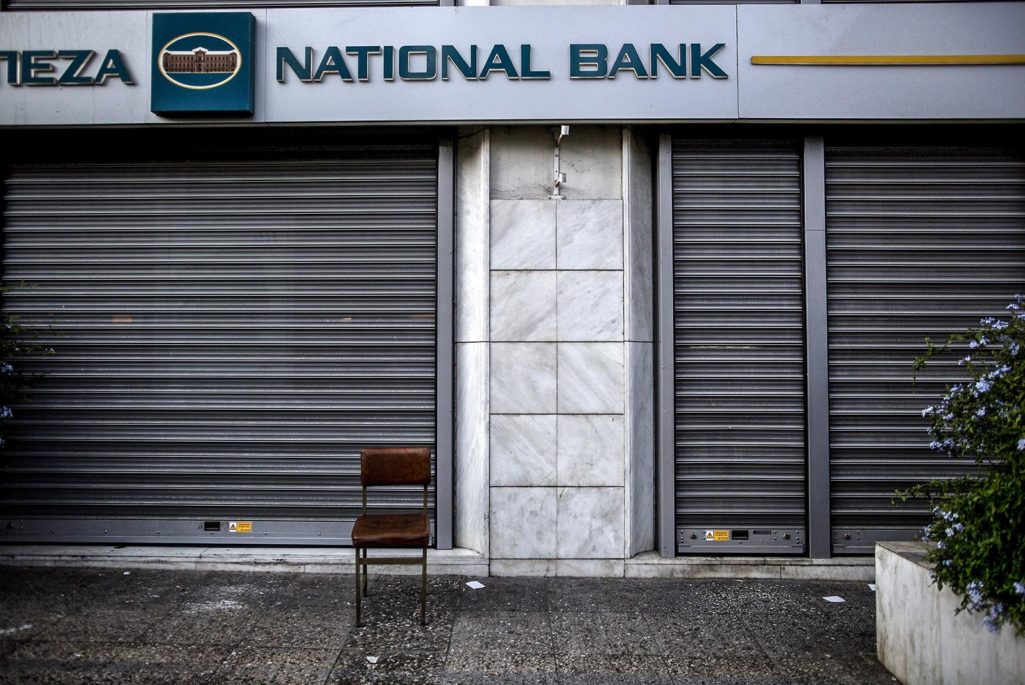 A closed branch of the National Bank of Greece in Athens on June 29, 2015. Greece announced it will shut banks for a week and impose capital controls, pleading for calm after anxious citizens emptied cash machines in a dramatic escalation of the country's debt crisis.

This is how Grexit happens. Following the collapse of negotiations between Greece and its creditors, the European Central Bank (ECB) has halted emergency liquidity assistance. Facing an intensified bank run, the Greek government on Sunday introduced banking controls and declared a bank holiday. With substantial wage and benefit payments due this week and local banks out of cash, economic conditions are likely to deteriorate quickly in Greece ahead of a planned referendum for July 5 asking Greek voters whether the government should accept a creditor-backed reform plan.

Creditor governments have left the door open for an agreement, one that if fully implemented and coupled with debt relief could be transformative for Greece. But that deal never seemed close and now seems out of reach. I am skeptical that economic or political conditions exist to allow a prolonged period of controls (e.g., Cyprus). Pressures to exit the euro and monetize government spending will become acute, and could outpace the sort of political transition or realignment within Greece that would allow a deal.

First, here’s a quick review of the weekend.

On Friday, the Greek government surprised creditors by rejecting their compromise proposal and announcing their intent to hold a referendum on the plan on July 5 (with a “no” recommendation from the government). Markets had rallied on expectation of a deal, and even deal skeptics thought negotiations would continue up to and after the June 30 deadline for making payments to the International Monetary Fund (IMF).

Eurozone finance ministers reacted sharply, announcing that negotiations had ended and that discussions had turned to “Plan B.” This led several ministers (perhaps alluding to Greek Finance Minister Yanis Varoufakis’s frequent references to game theory) to suggest it was “game over.”

Late Saturday night, Parliament approved the referendum for next Sunday, July 5, and the proposal now goes to Greece’s president, Prokopis Pavlopoulos, for approval. Unless the vote is called off, and given the escalating rhetoric domestically against creditor governments, it is difficult to see the Greek government returning to the table before that vote.

Given these developments, on Sunday the ECB suspended the provision of additional liquidity under its emergency lending facility (ELA). It is hard to fault the ECB: the additional liquidity provision ($10.01 billion in past week alone) had required forbearance under their rules, and had been justified by continuation of the negotiations. It is my understanding that should there be formal finding that Greek banks are insolvent, the ECB would need to end the program, but for now a freeze in access at current levels is a significant forcing event.

Lastly, Greek Prime Minister Alexis Tsipras this evening announced the imposition of broad banking and capital controls. All banks–including branches of foreign banks–will remain closed for six business days, until after the referendum.  ATM withdrawals will be limited to €60 ($66.75) per day (foreign bank cards would be exempted, presumably as a concession to the tourism sector).  Wages can be paid online, but there will be tight controls on transfers abroad. This leaves unanswered the extent to which payments can be made electronically within the country.  The Athens stock exchange also will be closed for an indefinite period.

Even if the Greek referendum passes on July 5, it is unclear that it would lead to rapid agreement on a new package.

Economic activity in Greece has already been badly damaged by arrears and a loss in confidence, and disintermediation of the banks has been reflected in greater reliance on cash-based transactions. Households reportedly have hoarded euros, but firms have been stretched by the crisis. Going forward, reduced expectations for a deal, concerns about currency redenomination, and limited availability of euros all work to trigger a cascade of business failures, rising numbers of non-performing loans, and further reduced tax compliance. Moreover, around 75 percent of Greek primary government spending is for pension, wages, and benefits, and large payments are due in coming days. Without an operating banking system, the dislocation from non-payment of these obligations will be substantial even without the panicked bank lines that formed Sunday night.

External default will have a lesser effect in the near term. There is little doubt now that on Tuesday the Greek government will miss its €1.6 billion ($1.78 billion) payment to the IMF, and the Fund’s board likely will move quickly to enact its normal procedures for arrears. I do expect European governments to show restraint and not call their loans in default based on the IMF move, but it will make any program in the future more difficult to negotiate and finance.

In a situation of severe financial stress, the government will quickly have to decide whether to issue IOUs to cover its expenses. In this case, a de facto “dual currency” would start to circulate domestically. If there was a creditor-backed program in effect, and the ECB was providing liquidity (as for example, was the case in Cyprus), this situation could be sustained for a period of time while debt is restructured and banks recapitalized. IOUs would trade at a discount, but those in critical need of liquidity could find it. That will not be the case here, and further the existence of a primary deficit means that the government will be unable to finance high-priority social spending. There may be some useful lessons to be learned from the Argentina default, where dislocations were reduced by developing a secondary domestic payments system that allowed for transfers within the country between frozen accounts. Even in this case, the government paid a high political price for reneging on their commitment to protect depositors.  From this perspective, the focus should be on what happens in the week after the referendum, as cash balances are exhausted and when pressures to reopen the banks will be strong.  In this environment, the incentive to turn to the printing press will be substantial.

European policymakers are at least publicly sanguine that there will be limited contagion from this weekend’s developments. No doubt, we are in better position than 2008 and 2010, given European rescue facilities that have been put in place, other reforms (e.g. banking union) and the existence of the ECB’s quantitative easing program (QE). Further, there is limited bank exposure and most of the debt is owed to the official sector, limiting the risks from financial market interconnectedness.

The Eurogroup and the European Central Bank have both signaled their intent to “make full use of all available instruments to preserve the integrity and stability of the euro area.” Taking a page from the U.S. crisis playbook of 2008, that indicates a willingness to bring overwhelming force in coming days. At a minimum, it suggests aggressive purchase of periphery sovereign debt (which is already allowed under the existing QE, though statements suggesting an extension of the policy may make sense), additional liquidity operations, and perhaps even the activation of swap lines.

Still, I suspect markets have underpriced the risk of dislocations in coming days.

In addition to poor positioning by investors that came back into risk assets on hopes of a deal and limited market liquidity, markets can now no longer avoid acknowledging that substantial loses will need to be borne on Greek assets. Questions may also be raised about debt sustainability in other periphery countries. Any sense of a loss of political resolve elsewhere in the periphery also will be a source of contagion.

My expectation is that the rise in sovereign spreads will be modest, with the main contagion seen on assets the ECB does not buy under its QE program. That could include bank stocks and high yield bonds. The euro should see a significant depreciation against the dollar, reflecting expectations of extended monetary easing from the ECB with a safe-haven effect towards the United States. This safe-haven effect could be counterbalanced if markets believe the turmoil in Europe will delay the Fed’s plans for an interest rate increase.

Early polls suggest a small advantage for the yes position–that Greece should agree with creditors on a package—but local analysts caution against reading too much into these early reads. In particular, it may be much easier to campaign against austerity (with government support) than for tough reforms. Much will depend on the reaction to the bank controls, and opinion polls will drive markets in coming days.

There is a broad consensus that a no vote on July 5 would strengthen the government’s resistance to a deal and make an eventual Grexit more likely.

Even if the referendum passes on July 5, it is unclear that it would lead to rapid agreement on a new package. First, the government has rejected the terms on the table, so that trust that they would implement any agreement is low. Further, the financial package offered last week would have expired once the current program ends on June 30. Of course, creditors could offer those terms again, but that would require a new program and new parliamentary approvals, substantially raising the political impediments to a deal.

In sum, time is short to avoid exit. The week after the referendum could be decisive.

This piece first appeared on the Macro and Markets blog from the Council on Foreign Relations.