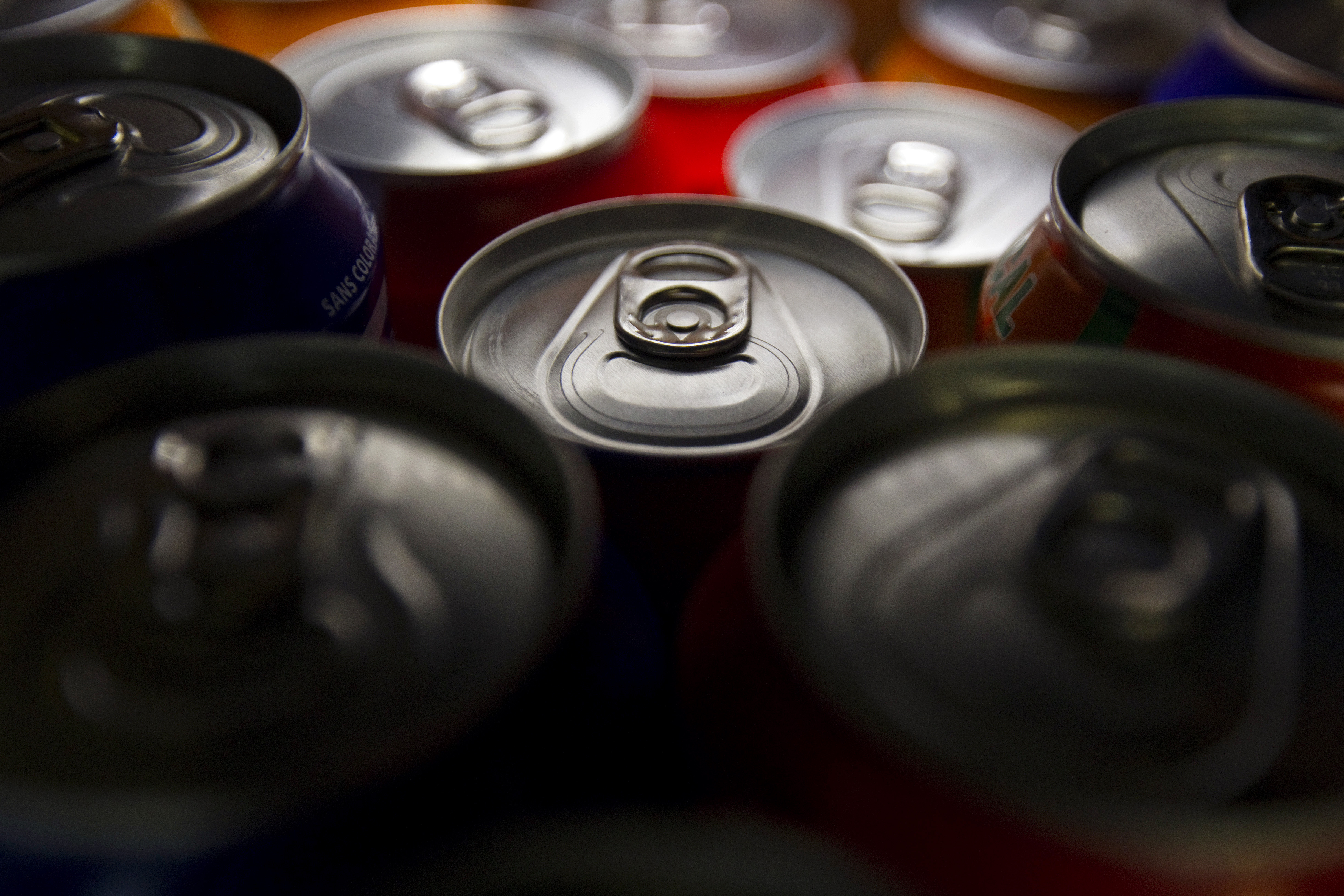 The photo shows cans of various sodas. Several cities have started taxing sodas in the past five years to bring in revenue, improve public health, or both.

Several cities have started taxing sodas and other sweetened drinks in the past five years. The goal is to bring in revenue, improve public health, or both.

But it’s unclear whether these “soda taxes” are achieving their goals.

So Anna Tuchman, an assistant professor of marketing at Kellogg, and colleagues analyzed the soda tax in Philadelphia. Philadelphia is an ideal setting for such research, they say, because the city has roughly the same rate of overweight and obese residents as the national average. Other cities that have adopted soda taxes, such as Berkeley and Boulder, have a much lower percentage of overweight and obese residents, making results harder to generalize to other parts of the country.

The researchers found that Philadelphia’s tax did reduce sales of sweetened drinks in the city. But purchases increased outside city limits, suggesting that people were simply driving a few miles to buy their high-calorie drinks at lower prices. And consumers actually continued buying soda at roughly the same rate. What they tended to cut down on were taxed drinks at the lower end of the calorie spectrum, such as sports drinks.

Consumers have a “pretty strong preference for continuing to buy and consume soda,” Ms. Tuchman says. “And they’re willing to incur some transportation costs or changes in their regular shopping behavior in order to go out of their way to buy the product at a lower price.”

In the United States, 72% of adults are overweight or obese, according to the Centers for Disease Control and Prevention (CDC). Obesity can lead to health problems such as diabetes and heart disease, which put a heavy burden on the health care system.

Policymakers have zeroed in on sweetened drinks because they are the single largest source of added sugar in Americans’ diets. That’s why “soda has this big target on its back,” Ms. Tuchman says.

While cities could theoretically tax other high-calorie foods, soda is seen as particularly pernicious because it doesn’t provide much in the way of other nutrients. The rationale is that “there’s not really anything good you can point to, like ‘Oh, at least you’re getting protein in that cheeseburger,’” Ms. Tuchman says.

In previous studies of soda tax policies, researchers investigated the effects of taxes by manually collecting drink prices in stores to determine whether the tax was passed along to customers and by surveying residents about their beverage purchases or consumption. But these studies tended to yield relatively modest amounts of data and, in some cases, relied heavily on people’s memories.

Ms. Tuchman collaborated with Stephan Seiler of Stanford University and Song Yao of Washington University in St. Louis to conduct a more in-depth study. The team obtained data from the market research firm IRI, which monitors purchases at retailers such as grocery stores, drugstores, wholesale clubs and convenience stores. The data set included more than 17,000 individual products sold at about 1,200 stores in and around Philadelphia from 2015 to 2018.

Philadelphia’s tax, implemented at the beginning of 2017, was broader than most. It applied not only to drinks with sugar-based sweeteners, but also those with artificial sweeteners, such as diet sodas. The tax was 1.5 cents per ounce, which may sound small, but translates to a $1 tax on two-liter bottles, which typically sell for around $1.50.

First, the researchers studied how the tax affected retail prices. The tax was levied on distributors who brought the drinks into the city. In theory, the distributors could pay some of that tax themselves. But the purchase data suggested that 97% of the tax was passed on to consumers. In stores, prices of taxed drinks increased by an average of 34%.

Did those price hikes discourage people in Philadelphia from buying the drinks? In the city, the answer was a resounding yes. Sweetened drink sales dropped by 46%.

But outside the city, it was a different story.

If the main goal is to improve residents’ health, policymakers might need to consider other options, such as directly taxing calories or sugars.

“We were quite surprised to find very large increases in sales at stores just outside the city,” Ms. Tuchman says. This effect is called “cross-shopping.” Once the team accounted for cross-shopping within a six-mile radius, the net decrease in sweetened-drink sales in Philadelphia and the surrounding area was 22%. While this is significantly less than the city-specific decline, it still represents a significant decrease.

The researchers also looked at a secondary goal of the tax: raising revenue. By this measure, the Philadelphia tax fell short. The city had estimated that the tax would raise $92 million in the first year, but it only raised $79 million. That discrepancy may have arisen “partially because they didn’t expect so many customers would leave the city,” Ms. Tuchman says.

Another unexpected finding was that within Philadelphia, sales of taxed drinks decreased less in lower-income neighborhoods—areas where CDC data suggests obesity rates are highest.

Many economists would have predicted that “lower-income consumers should be more price-sensitive, and therefore they should reduce their consumption more,” Ms. Tuchman says.

The researchers hypothesize that lower-income residents couldn’t easily travel to stores outside the city, perhaps because they didn’t own cars and public transportation was inconvenient. So it was harder for them to avoid the tax. “It looks kind of regressive,” Ms. Tuchman says. “Lower-income consumers are taking on more of the tax burden.”

Looking at the population of Philadelphia overall, did the tax improve people’s nutritional intake?

For instance, perhaps the tax prompted people to purchase healthier alternatives. The team checked whether sales of bottled water rose. The answer was no.

Then, the researchers examined untaxed juices. These “natural” juices are high in sugar, but because they don’t contain added sugar or sweeteners, they’re exempt from the tax. And sales of those drinks increased by 9%. In other words, when people did buy more untaxed drinks, they preferred the sugary ones.

Not only that, but when consumers scaled back their purchases of taxed beverages, they tended to cut the lower-calorie options. For instance, sales of sports drinks—which are relatively low-calorie — dropped by about 36% in the city and surrounding area. But sales of the tax’s flagship product — soda — barely budged.

The team estimated the change in residents’ total calorie intake from taxed and untaxed drinks, including those purchased outside the city. They found that calories consumed decreased by 16%, but this result wasn’t statistically significant, meaning the researchers can’t say for sure whether there was a real drop.

Finally, the team looked at what would happen if the soda tax were implemented differently. Even though the tax generated less money than the city had predicted, the researchers found that if the goal was to maximize revenue, the current tax rate was pretty close to optimal.

Then the researchers considered what might happen if the tax were applied to a wider geographic area. They predicted that the people who currently drove elsewhere to buy drinks would continue buying sweetened beverages at higher prices in the taxed area. So tax revenue would increase, but nutritional intake might not change much.

If the main goal is to improve residents’ health, policymakers might need to consider other options, such as directly taxing calories or sugars. In that case, higher-calorie drinks would be taxed more than lower-calorie products.

Policymakers should consider factors such as the ease of buying untaxed drinks elsewhere, Ms. Tuchman says. It’s important to think about “how the choice of each of these different parameters of the policy is going to impact consumer behavior,” she says.

Hamza Mudassir Lecturer in Strategy at University of Cambridge
URL: https://www.brinknews.com/do-soda-taxes-work-its-complicated/
Get ahead in a rapidly changing world. Sign up for our daily newsletter. Subscribe
​​