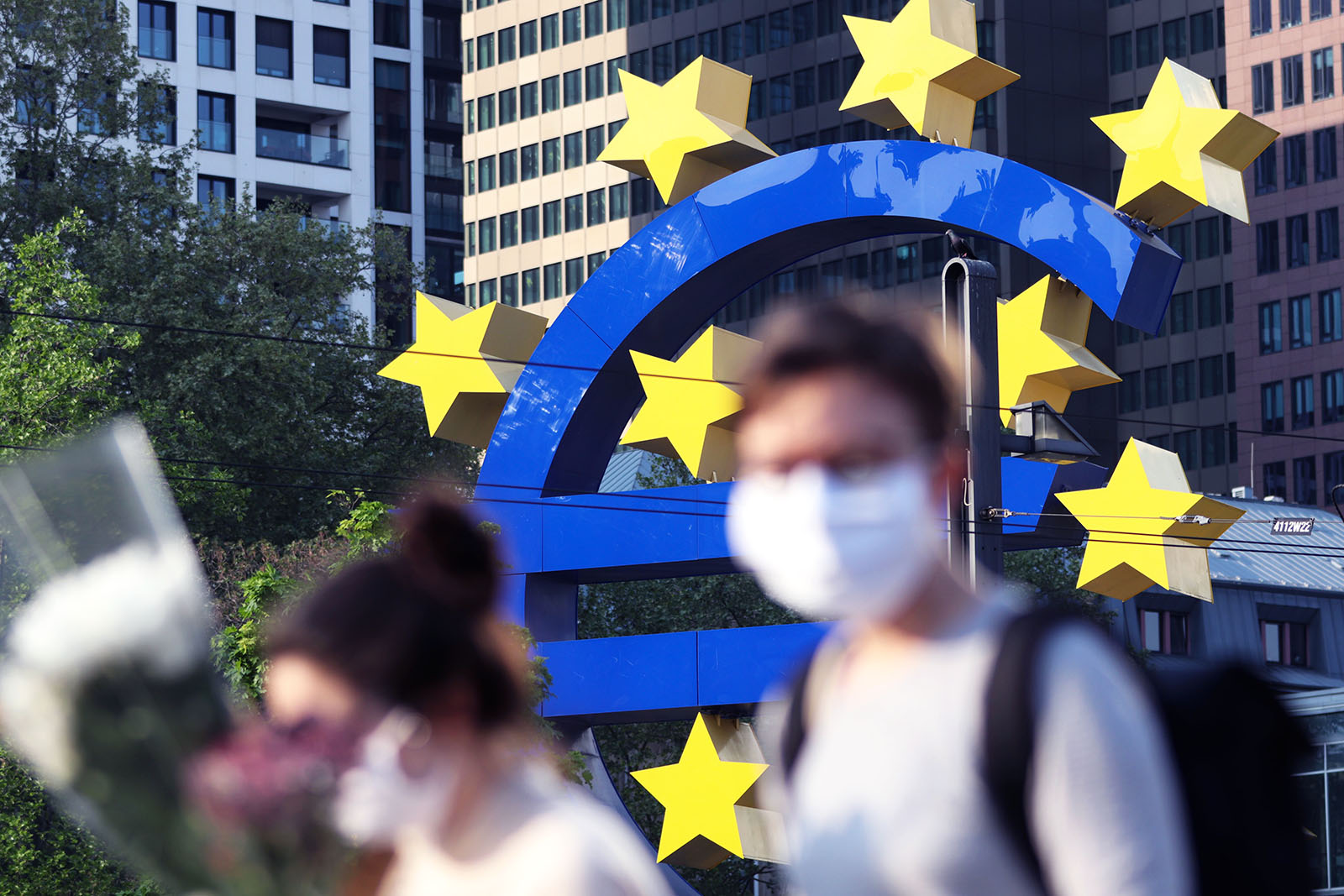 People wearing face masks walk in front of a big Euro sign in Germany. Europe is still too dependent on easy access to credit, when in fact, what will be needed most is capital.

The COVID-19 response in Europe underlines how much the continent is still dependent on the bank sector to provide funding to the real economy.

Public authorities have acted quickly and relaxed rules in order to allow the financial sector to quickly pump liquidity into a frozen economy. In France alone, as of April 15, only weeks after stringent lockdown measures had been introduced, credit institutions had already disbursed 22 billion euros in government guaranteed loans.

The System Is Holding Up — for Now

Banks’ employees are working overtime to expedite credit assessments and disburse loans. For now, despite unavoidable practical challenges, the system seems to be holding up well. Banks are much better capitalized than 10 years ago. The financial system, thanks primarily to the extraordinary central banks’ support, is not under stress — not yet, at least.

However, not unlike European governments struggling to craft a common fiscal strategy, the banking sector will find it very challenging to emerge from the crisis.

Banks Are Currently Acting As Utilities, Rather Than Private Enterprises

Dividend payments are strongly discouraged by public authorities, and some European bank CEOs are renouncing a big part of their pay. As governments increasingly reassess certain features of globalization, the temptation to ring-fence and protect strategic assets from outsiders is only likely to increase. The European Commission has temporarily relaxed certain state aid rules to allow governments to protect strategic companies from foreign takeovers. Banks are not yet included, but that could change.

A very different approach between U.S. and European banks is also emerging in response to the crisis. Loan loss provisioning among U.S. banks has increased substantially. In its latest quarterly report, JP Morgan Chase announced that it has increased its loan loss reserves from $6.8 billion to $8.3 billion.

There also seems to be growing evidence that U.S. banks are more reluctant to provide credit to European clients, especially if they are asked to provide loans with longer maturities. Most European banks will report their quarterly results in the coming weeks. Those that already did so are putting aside less than U.S. banks. It will be interesting to see how others respond to their American peers.

What Happens to the Banking System When Cheap Credit Ends?

What is clear, however, is that supervisors in Europe are determined to avoid stoking the fire by acting pro-cyclically. For the time being, credit needs to flow, with as little constraints as possible. But what will happen to European banks if or when regulators and supervisors pull the punch bowl away?

Europe is still too dependent on easy access to credit, when in fact, what will be needed most is capital.

Given the severity of the crisis and the likely longer-lasting damage that COVID-19 will inflict on the real economy, the outlook is full of dark clouds. Debt levels will go up — and not only for governments. Even guaranteed loans will need to be repaid or refinanced once they mature.

One complicating factor is that European countries were already undergoing significant structural changes — think of digitization or the need to “green” the economy. It is, therefore, only common sense to assume that the disruption is likely to be deeper and longer than some forecasters who see a V-shaped recovery are predicting.

Banks will be forced to recognize losses, even if the biggest portion of the loan is guaranteed by the government. Guarantees are certainly a helpful tool, but in the end, they only provide a bridge.

If loans that need to be refinanced lose the protection of their guarantees, banks will be very reluctant to refinance at similar conditions, even in a favorable interest rate environment. They might even be unwilling to refinance at all. Financing conditions could, therefore, suddenly tighten, jeopardizing whatever recovery may have occurred in the meantime.

One consequence is that the ratio of non-performing loans on bank books will increase again, after many years of decreases. This in itself constrains lending capacity.

A few years ago, as head of the European Banking Authority, today’s chairman of the European Central Bank’s SSM (Single Supervisory Mechanism), Andrea Enria, proposed to temporarily remove non-performing exposures from banks’ balance sheets by creating a European “bad bank” for non-performing lenders tasked with selling those assets to investors. The plan never took off, but some in the ECB now seem to believe that it would be wise to take a second look.

Capital, Not Credit, Is Needed

But ultimately policymakers will realize that the crisis response in Europe and the current role of banks exacerbate a feature that is a structural challenge to any recovery on the continent. Europe is still too dependent on easy access to credit, when in fact, what will be needed most is capital.

In the absence of truly deep and liquid capital markets, any recovery and structural transformation of the economy in Europe will be constrained by very high public and private debt levels.

As tempting as it may be, that won’t change by shifting debt from the private to the public sector and vice versa, even if that debt is pushed into the not-too-distant future.

Til Schuermann Partner and Co-Head of Oliver Wyman’s Risk & Public Policy Practice
URL: https://www.brinknews.com/europe-capital-markets-credit-covid-impact-response-economy-finance-france-germany/
Get ahead in a rapidly changing world. Sign up for our daily newsletter. Subscribe
​​