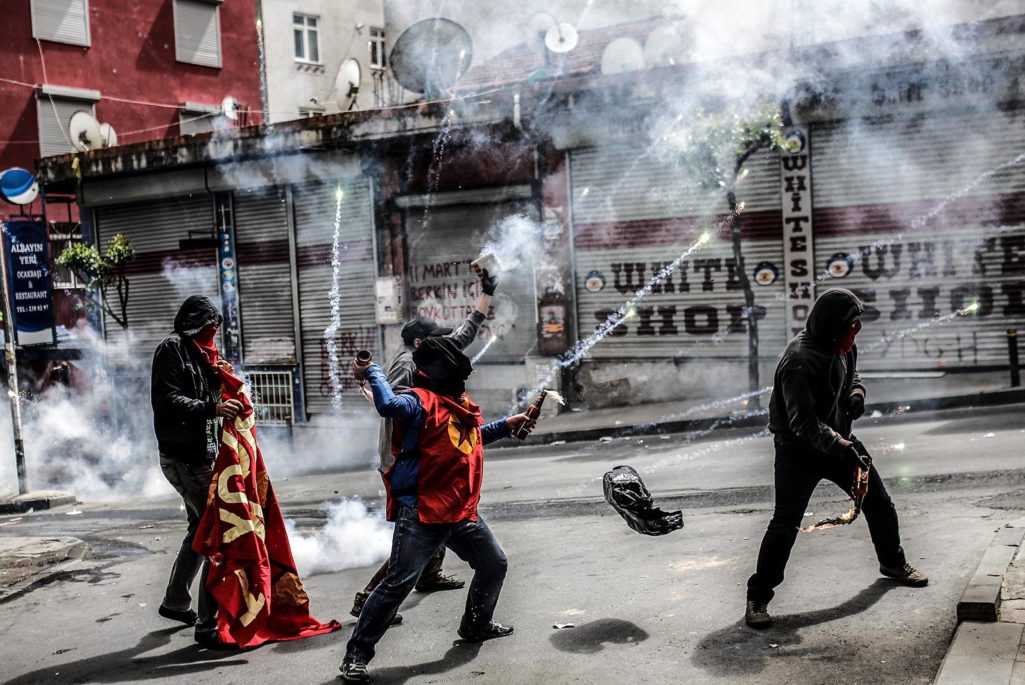 Demonstrators throw molotov cocktails and shoot firecrackers during a May Day rally in Istanbul on May 1, 2016. Turkish police clamped down on unauthorized protests using tear gas and water cannons against demonstrators and imposing a heavy security blanket on the city.

The halting nature of the global economic recovery, set against an ever-increasing environment of geopolitical turmoil and uncertainty, has businesses leaders on edge, according to a recent global survey.

The Executive Opinion survey, conducted by the World Economic Forum, queried 13,000 business leaders across 135 countries, asking them to identify the top five global risks of highest concern to businesses in their country.

The lackluster recovery coming out of the economic trough created by the 2008 global financial crisis remains a top concern among executives located in advanced economies. The latest victim of the slow recovery: the steady downward trend of world trade, which is coinciding with a rise in national protectionism. That protection is “driven at least in part by governments responding to widespread societal discontent,” the survey says.

That gloomy economic backdrop and the specter of protracted deglobalization is now paired with concerns about asset bubbles, which were “the most widely mentioned risk, as on-trend investors inflate markets unsustainably in pursuit of decent yields,” the survey says. Following that major concern, executives also noted continued high unemployment and underemployment, elevated sovereign debt and the shaky nature of financial institutions and the broader financial system.

The increase in cyber-related events has elevated cyber attacks to the second most worrisome risk for business leaders. And involuntary migration is also seen as an elevated risk, particularly in countries where migrants make up a significant percentage of the total population.

Business leaders in emerging markets have different concerns. The collapse of commodity prices is among the top worries, particularly for oil markets. The fall in oil prices has strained GDP and government revenues in oil-dependent nations, exacerbating money woes, pulling down employment (which is the number one risk) and threatening investment in infrastructure. “Bail-out requests and the imposition of austerity programs have placed a spotlight on government imprudence and corruption during the good times, and placed at risk the ability of those countries to transition to a more diversified economic future,” the survey says.

Against this backdrop, leaders were concerned about the rise of popular discontent. “In particular, there is the fear that discontent might intensify ethnic divisions, (re)awaken separatist endeavors, and facilitate a resurgence of terrorist activity,” the survey says. Europe—Economic risks remain high on the list. Unemployment ranks as the number one concern for business, with fiscal crisis and financial institution failure also among the top ranking worries. Threats posed by involuntary migration have risen significantly since 2015. For several Western European nations, cyber risk tops the list of concerns. Meanwhile, social instability and terrorist attacks are the big concerns of French business leaders, and geopolitical risks dominate Turkish concerns.

North America—The U.S. and Canada differ in their concerns. For U.S. businesses, cyber attacks and data theft or fraud were the top issues (holdovers from last year’s survey), with misuse of technology rising sharply as a concern from 2015 reports. Terrorist attacks and fiscal crises are “persistently worrying” in both 2015 and 2016. Canadian execs are more troubled by energy prices, while worries about the fiscal crisis have risen sharply from a year ago. Canadians also put two environment risks high on their list: failure of climate change mitigation and the impact of extreme weather events.

Asia-Pacific—High unemployment was raised most often by business leaders in this region, representing a significant leap from 2015. China execs raise the issue of asset bubbles as the most troubling risk; Indonesia and Singapore both ranked the threat of terrorist attacks high. The environment factored heavily into the risk analysis in Japan and Thailand.

Latin America and the Caribbean—“National governance failure remains the top perceived threat to business (most frequently mentioned in Brazil and Mexico),” the survey says, “followed by high unemployment, fiscal crises, and social instability—similar to 2015’s results.” Illicit trade, also jumped onto the list as a new risk in 2016.

Alain Frachon Senior columnist for Le Monde
URL: https://www.brinknews.com/halting-global-economy-geopolitical-turmoil-has-business-leaders-on-edge/
Get ahead in a rapidly changing world. Sign up for our daily newsletter. Subscribe
​​