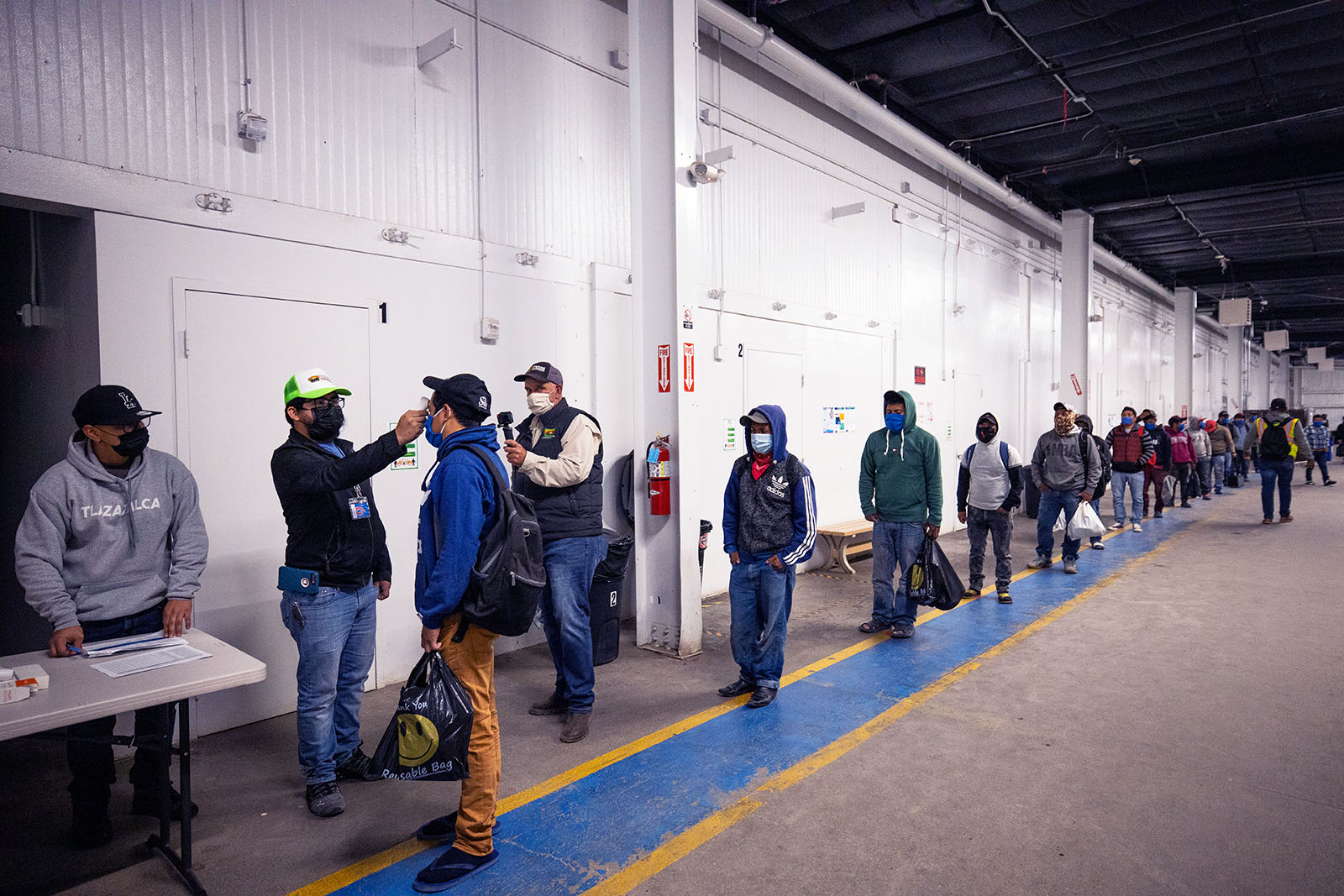 Migrant farm laborers have their temperature checked before boarding a bus to their shift in King City, California. Millions of migrant workers have continued working jobs in the United States that have been deemed essential during the pandemic.

The coronavirus pandemic upended business across the globe. But some sectors, like home entertainment, video conferencing and food delivery systems, are booming — and now you can add a surprise category to the list: remittances.

At the beginning of COVID-19, it was widely assumed that economic crunches would mean fewer remittances. In April, the World Bank predicted that the coronavirus would cause remittances to Latin America and the Caribbean to crash by almost 20% this year, projecting it would be “their sharpest decline in recent history.”

Remittances did fall sharply in April, but quickly rebounded, and even climbed in some countries during the first six months of the year. By the time June came around, the Dominican Republic was receiving 26% more remittances than in June 2019. Honduras also saw a 15% year-on-year increase in June this year, while El Salvador’s remittances rose 10%. Meanwhile, Guatemala hit historic records in July and August this year.

And in Mexico, remittances ballooned to $3.57 billion in August, according to the Bank of Mexico — the second-highest level on record for a single month and 5% above August 2019. Payments in the first eight months of 2020 are up 9% compared with the same period last year.

How can we explain this counter-intuitive trend? One reason is that millions of migrant workers have kept working jobs in the United States that have been deemed essential during the pandemic — in health care, agriculture, food production and processing. But that’s just part of the story, given that federal data also shows that the Hispanic unemployment rate stands at more than double pre-pandemic levels.

More likely, migrants know that if things are tough where they are, it’s even worse back home.

At present rates, COVID-19 could set back Latin America and the Caribbean’s GDP by a decade, according to a joint report by the United Nations Economic Commission for Latin America and the Caribbean and the World Health Organization. Across the region, 2.7 million businesses are forecast to close in 2020, unemployment will reach 44 million and the number of people in poverty is expected to reach 231 million — the same level as 2005, or a 15-year backslide.

Unlike foreign investors, “migrant workers are immune to herd behavior,” says a World Bank economist. They would rather skip meals than not send money to family members getting hit harder. Moreover, if local currencies tumble, the incentive is to take advantage of beneficial exchange rates and send even more remittances.

With migrants dipping into savings to serve as lifelines, the risk is that funds can dry up — especially if the U.S. economy continues to do poorly, or if a second pandemic wave strikes.  That could spell trouble given the outsize role of remittances in some of the region’s economies. In 2019, remittances accounted for more than 20% of GDP in Honduras and El Salvador, 14% in Guatemala and 8% in the Dominican Republic. Outside of Central America and the Caribbean, remittances play a smaller but much-needed boost of several GDP points in countries like Colombia, Bolivia and Ecuador.

The much-anticipated drop-off in remittances, from the COVID-19 pandemic, has so far failed to materialize in Latin America.

When you think of Latin American migration, the trek north to the United States often comes to mind. But intra-regional migration has been growing at a faster pace than emigration to more developed countries.

The major factor is the massive crisis in Venezuela, with some four million refugees fleeing economic devastation and violence in recent years and arriving en masse to Colombia, Peru, Chile, Ecuador, Brazil and Argentina. Remittances are now a crucial commodity to Venezuelans in-country and the second largest source of foreign earnings after oil.

But it’s not just citizens fleeing the regime of Nicolas Maduro. Migration from Haiti, Cuba, Central America, Nicaragua, Venezuela and Colombia show signs of continued mobility within the Americas, specifically towards Brazil, Colombia, Costa Rica, the Dominican Republic, Ecuador, Panama and Peru. An Inter-American Dialogue Report this year predicts that migration from other countries in the region, such as Guyana, Paraguay and Bolivia, will also increase in the near future.

New intra-regional migration brings new remittance patterns. After Venezuela, the highest year-on-year remittance growth was in Brazil, while countries like Panama saw growth in remittances shoot up from less than 1% to 8%. Comparing 2010 to 2019, remittances from Chile to Haiti ballooned from nothing to $115 million as the diaspora grew by 3,500%. These remittances might ebb and flow as new populations arrive to countries which historically are not migrant host nations — and in turn implement more restrictive immigration policies.

Tech firms operating in the Americas are keeping up with demand for money transfers — and the $100 billion industry is adapting to changing needs. Remittance pick-up in home countries via technologies, like digital wallets and mobile banking, are expected to reach 10% across Latin American by 2022 — and some corridors have already hit 30%. Both home-based start-ups and traditional banks are looking to the efficiency of block-chain technology to send and receive remittances.

There are still barriers to digitization. Undocumented migrants are less likely to have bank accounts, for example. But digital firms are trying to work around these obstacles, with companies, like Remitly, launching a new bank this year aimed at immigrants, which allows them  to use a wider range of picture IDs to sign up than other banks do.

The global average cost of sending just $200 remains high — around 7%. As digital technology and mobile payment systems lower prices, Latin American governments could assist by relaxing caps on how much can be transferred digitally, or providing tax incentives to money transfer service providers (like Pakistan did in 2009 in response to the global financial crisis). Another innovation from abroad are cash-back incentives for remitters, as the Bangladesh government instituted.

The much-anticipated drop-off in remittances has so far failed to materialize in Latin America. The coronavirus, shifting migration trends and newfound financial technologies are all changing monetary flows across the region. When it comes to transferring much-needed cash, it’s clear: If there’s a will, there’s a way.

Hamza Mudassir Lecturer in Strategy at University of Cambridge
URL: https://www.brinknews.com/how-covid-19-has-reshaped-latin-american-remittances/
Get ahead in a rapidly changing world. Sign up for our daily newsletter. Subscribe
​​