How Disruptors Are Shaping the Future of Health Insurance

Subhajit Mandal
Head of Products at Symbo and Founder & Board Member of the Singapore Fintech Association LumenLab, Singapore 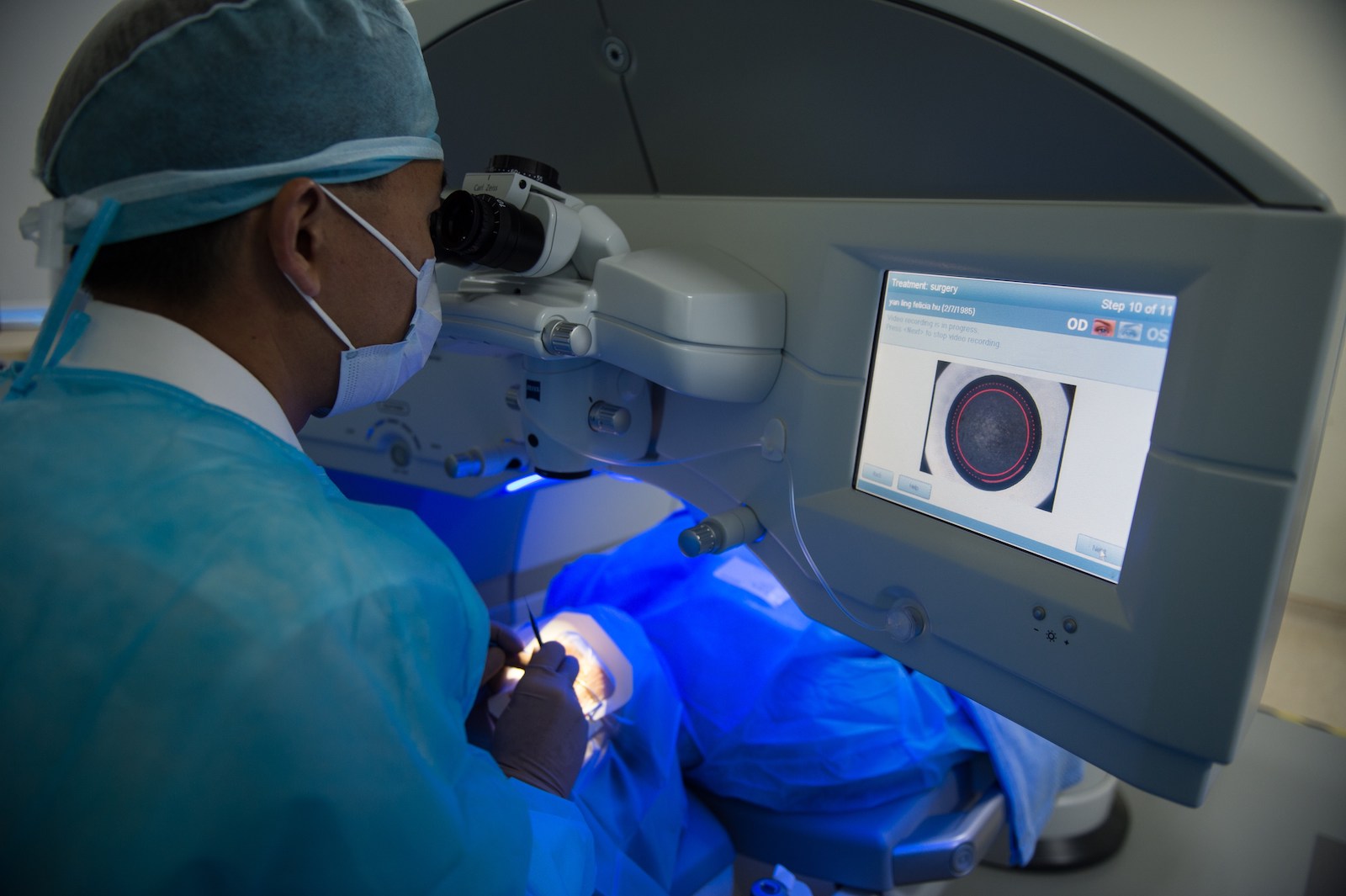 Staff members perform a surgery at the LASIK Surgery Clinic in Singapore. In Asia, Singapore is one of the few countries that has a centralized database of digitized health records for all its citizens.

This is the fourth article in a weeklong series on insurtech.

The number of insurtech companies launched every year has been on the rise since 2008. What different innovative ideas are these budding entrepreneurs working on to create new businesses and services? A thorough look all around us provides the answers—the disruptive influence of innovation has started permeating through various aspects of our lives, and insurance is no exception.

To identify the potential for disruptive innovation, we need to look at multiple changes happening simultaneously. Similarly, in the area of insurance, the culmination of changes in disparate areas are coming together to create something completely new.

There are four specific changes happening around the world—and in most parts of Asia—that will have a drastic effect on the insurtech industry: data ownership policy changes, the digitization of health data, blockchain and mobile technology.

With the recent uproar around data ownership, the EU General Data Protection Regulation has been a focal point in discussions. Countries such as India, which has over a billion people with digital identities, are also working on creating new frameworks of data ownership. These new policies are clarifying the concept of “ownership” of data and reinforcing that customers own their own data.

Although conceptualizing this is common sense, this simple notion that customers own their own data has far-reaching consequences. The most significant impact for insurtech lies around health data. Hospitals, in the absence of this black-and-white rule around data ownership, have not been required to allow customers access to their own data until now.

The cyber-insurance segment of the market has benefited greatly from this new focus on data privacy and is one of the fastest-growing insurance segments. At most times, cyber insurance covers the breach of data, but it is still largely an area with several unknowns. Warren Buffett, for example, is of the view that nobody in the industry really knows the extent of risk involved, and has said, “I don’t think we or anybody else really knows what they’re doing” when they are writing cyber insurance. However, there are insurtech startups such as Boxx Insurance and At Bay that are braving the unknown and looking to capitalize on this new drive of data privacy and security and its impact on people’s need to have some kind of insurance as a safety net.

About two decades ago, the U.S. made the digitization of health data a priority. However, this has just started picking up steam in developing countries. In this part of the world, Singapore is one of the few countries that has a centralized database of digitized health records for all its citizens. Without digital health data, the concept around data ownership has no implications. Hospitals had processes in place where consumers could queue up, fill out a form, pay money and retrieve their own past health records. Now hospitals’ IT departments are forced to consider systems that will allow customers and other companies (on customer approval) to access customers’ health data.

For example, an MRI scan from two years ago, is available for retrieval now. However, customers are still sitting on the fence on this one. They understand that this seamless flow of data between doctors and insurers helps their cause, but they are still unsure about the safety and security of their health information, given that the sector has seen its share of data breaches in the recent past.

It is not surprising, therefore, that data digitization, including security, and insurance is potentially the biggest area of work for startups, with companies such as Innovaccer in the U.S. and Vivant in India active in this space.

The mobile phone, together with data ownership, data digitization and blockchain, gives us a peek into what is possible in the future.

Blockchain is particularly great at forcing new technological architecture. It could result in a scenario where there are no more centralized databases, but a distributed ledger that verifies all transactions independently, thereby reducing fraud.

When it comes to customers, however, addressing concerns of access control mechanisms around their health data is an important key to the changes being seen. Potentially, blockchain architecture could be used to ensure that health data access logs are immutable. Actual health data storage and security will have no blockchain dependability, but time-bound access provided by users to different entities to access user health data could be implemented using blockchain. Needless to say, all insurtech startups are dependent on blockchain.

This area has seen relatively less work compared to others, as the areas of interplay between insurtech and blockchain are still evolving. Notable players in this space are B3i in the reinsurance space and PokitDok.

The mobile phone that fits into a pocket and on which this article is likely being read, has more power than even the computer that helped take man to the moon. Smartphones have become ubiquitous globally—they are as common a sight in the hands of a trader on Wall Street as in those of a “tuk tuk” driver in Cambodia.

The pervasiveness of mobile phones allows for the better understanding of customer behavior through web use and online searches. Applications of all kinds are housed on a single device, providing valuable insight into user habits and preferences. Therefore, the mobile phone, when put together with the above three trends, gives us a peek into what is possible in the future.

Now imagine yourself as a user who needs health insurance. All your health records since birth, including from different health care providers, are collated and stored on the mobile phone. Now, the insurer, instead of asking you to fill out a lengthy health declaration form, sends its risk algorithm to your phone. This risk algorithm does all calculations of insurance risk classifications on your phone based on the digitized health data stored on the phone and almost instantaneously provides your risk premium for your insurance policy.

Since all calculations have happened on your phone, data privacy is completely ensured, although whether it is completely secure still depends on whether the phone’s security can be breached. Since all calculations were done using the blockchain technology that is part of your mobile phone, the authenticity of the calculation is confirmed, and there is no chance of any fraud. And within seconds, you have a customized risk premium quotation tailor-made for you.

When Is This Future Due?

This future is quite far away, as blockchains don’t run on mobile phones yet. Separately, all health data are not digitized, and although privacy policy gives users the right to their own data, health care providers, such as hospitals, are not API-ready just now. That said, we are seeing change at rapid pace, and corporate innovation labs and insurtech startups such as Symbo are trying to push the envelope on some of these pieces.

There is an aphorism in the venture investing world that we tend to overestimate the change that we’re going to see in three years’ time and have a propensity to underestimate the magnitude of change that we will see in 10. The truth perhaps lies somewhere in between. Given the pace of change being witnessed in technology and in how technology is being used in insurance, it is near impossible to put a timeline to developments. While it may take a few years, this future will be realized, and businesses—startups and incumbents alike—must prime themselves to capitalize on it.

Head of Products at Symbo and Founder & Board Member of the Singapore Fintech Association LumenLab, Singapore @MondyWinsl

As head of Products at Symbo, Subhajit leads product management efforts across all lines of business, with a deep focus on customer experience. Before this, Subhajit was a director at MetLife Innovation Centre (LumenLab) in Singapore, covering LumenLab’s fintech initiatives across Southeast Asia and launching Vitana, a first-of-its-kind blockchain-enabled health insurance within the MAS Sandbox.