Is Free Trade Really Free? Why Protectionism is Alive and Well 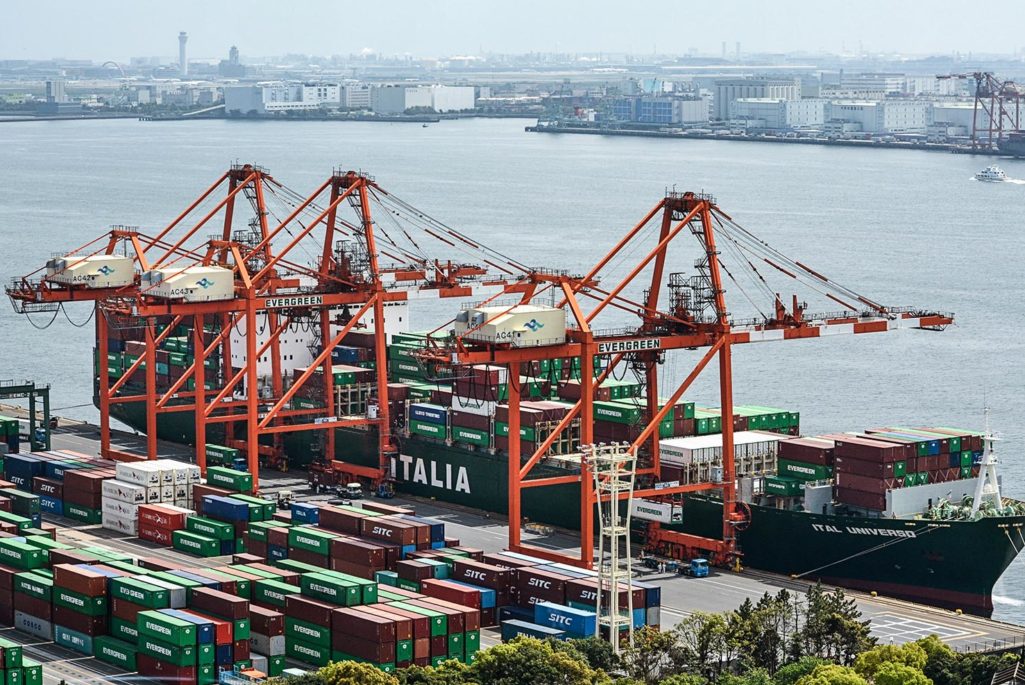 General view shows a container wharf in Tokyo port on April 22, 2015. Trade protectionism, on a global level, while certainly not as overt as it was 50 or 60 years ago, still exists in subtle and varied forms.

Recently, it was reported that the three largest U.S. airlines —American, United and Delta—are protesting three major Persian Gulf-based airlines’ right to fly in the U.S. market. The American carriers claim that the Gulf carriers (Qatar Airways, Emirates and Etihad) have received $42 billion in subsidies from their governments over the past several years, amounting to an unfair trade advantage that enables them to offer better and lower-cost service.

The controversy doesn’t surprise Reuben Abraham, CEO and senior fellow at IDFC Institute (a Mumbai-based think tank) and a member of the World Economic Forum Council on Emerging Multinationals. “There’s no doubt about it: The Gulf carriers, [or for example] state-owned enterprises in China—all of them have some level of state subsidies embedded into them. But one mustn’t forget that equally there are subsidies embedded into products on the other side of the world,” he said.

He gives the example of the iPhone. “Most of the technology inside of an iPhone in some point in time or another has been funded by the U.S. government … Lithium-ion batteries came out of research funded by the [Department of Energy],” he said, naming a host of other essential inventions—liquid crystal displays, micro hard drives, microprocessors and click wheels—that he said fall into the category of government-supported tech. This argument was put forth by economist Mariana Mazzucato in her 2013 book, The Entrepreneurial State.

“Now, you want a level playing field for the iPhone to compete in fair markets like India,” Abraham said. “[But] if I’m an Indian firm manufacturing let’s say a smartphone, it’s a little hard for me to compete against something that has a state subsidy.”

Leaders at the 2009 G20 summit in London—a group representing both developed and developing markets and accounting for 85 percent of the global economy—pledged they “would not repeat the historic mistakes of protectionism of previous eras.” And more than a decade earlier in 1995, the World Trade Organization (WTO) was established to promote free trade and reduce trade barriers between nations. It now has 162 member countries.

Yet it appears that protectionism is by no means dead, according to Abraham as well as Ann Harrison, a Wharton management professor, and Tarun Khanna, a professor at Harvard Business School and a colleague of Abraham’s on the World Economic Forum Council on Emerging Multinationals. They said that protectionism, while certainly not as overt as it was 50 or 60 years ago, still exists in subtle and varied forms.

“It’s not so black-and-white anymore,” Khanna said. Protectionism seen in the past was overt, he notes—such as having to pay tariffs of 40 percent, 50 percent or even 80 percent on imported cars. “In the old days, you had those [tariffs] in India and many countries in Africa.” The obvious result, he said, was that “the domestic providers of [items such as] cars were entirely protected, so they continued to produce terrible cars.”

Harrison characterizes today’s anti-dumping and countervailing duty policies as a common form of protectionism used by most large countries including the U.S., EU, India, China and Mexico, although, she noted, the policies are sometimes put forth as a way to enforce fair trade. In these scenarios, a foreign firm introduces a low-cost product into an industrialized country such as the U.S. If the U.S. believes that the firm receives unfair advantages from its government, it will impose tariffs. “Brazilian orange juice, Mexican tomatoes … the list goes on and on,” Harrison said, adding that the tariffs can be very high. “When China was found guilty of dumping garlic, the garlic duty was 300 percent.”

Abraham pointed to farm subsidies as another form of protectionism. “You’re basically protecting domestic agricultural industry for political reasons.” Khanna agreed: “You see plenty of [this type of] protectionism in Japan … the Midwest United States, and so on.”

There can also be “disguised protectionism” in the form of health and safety requirements.

There can also be “disguised protectionism” in the form of health and safety requirements, says Harrison, as when a country blocks an import that it claims is dangerous to its consumers. Protectionism can even take the form of a marketing message: Harrison cites the U.S.’s “Buy American” campaign.

Khanna identified a prevalence of what he calls “bundled deals,” or “you can do this if you do that,” which he said are hard to characterize as purely protectionist. He said that China, for instance, has tended over the past seven or eight years to tell foreign companies wanting to build factories in China that in return, they will have to transfer some intellectual property to indigenous manufacturers. “It’s a little bit of an industrial policy type of issue, and it’s not strictly protectionism in the sense of being a tariff barrier … It’s part of their bargaining power.”

Protectionism is not limited to the movement of goods, said Abraham. He states that another aspect involves labor, and that a “weird sort of hypocrisy” exists in the developed world on this point. “By and large, in the West when they talk about free trade, they’re talking about capital and capital goods —because that is where the West is competitive. But … an emerging market is actually competitive vis-a-vis labor.” He added that from India’s perspective, for instance, “my competitive advantage is not the iPhone … it is my techie.”

In Abraham’s view, visas—and visa quotas—constitute “non-tariff trade barriers. It’s very hard for an Indian businessman to get a U.S. visa.” He added that if an Indian professional wants to attend multiple conferences in Europe, for example, policies there require that the attendee apply for multiple short-term visas that grant only a handful of days’ stay for each event. “The average Westerner has no idea,” he said.

Is Protectionism Directed Against Emerging Markets?

The experts agree that in general, a freer trade environment rather than protectionism is better for the world economy. Khanna states that with protectionism, “you’re impeding the free flow of stuff that you might want to buy, or money that you and I want to invest, or talent that you and I might have, that needs to find its way to its best use.”

Harrison observes that emerging markets might have some justification for being protectionist since their economies are struggling to establish themselves. On the other hand, she points out, this doesn’t always work well in practice. “Many countries have tried to use protectionism to nurture their home industries—but even though it makes sense in theory, countries screw it up about 75 percent of the time.”

She gives India as an example, saying that in the past it attempted to use protectionism to promote its nascent industries, but has only really become a successful, faster-growth country since it liberalized its economy in the early 1990s.

Are developing countries a particular target of protectionism by developed nations, as some have argued? Harrison said no. “I don’t think that emerging market multinationals are being targeted in any particular way. I think home countries just want to protect their own markets and promote their own firms, and I don’t think they discriminate in doing so.”

For instance, the French are “really trying to hold onto their cultural heritage,” she noted. And if one looks at the behavior of the French entertainment industry, for example, “they’re trying to … keep it as French as possible,” and “they don’t care where those foreign companies are coming from—whether emerging markets or the U.S.” She cites a similar example from the developing world. “Right now, India is protecting its retail sector, and it doesn’t care whether it’s a Walmart, a Carrefour or a Chinese retailer; it just wants to try to preserve the small mom-and-pop Indian stores.”

Abraham, on the other hand, does not dismiss the possibility of racism being an element in protectionism. He cites the much-publicized 2006 takeover of Arcelor, a French steel manufacturer, by Mittal, a company with its origins in India. According to The New York Times, Arcelor’s then-CEO, Guy Dollé, had made comments such as calling Mittal’s products lowly “eau de cologne” compared with the “perfume” produced by his own company. The comment where “racism really came out,” in Abraham’s view as well as others’, was when Dollé “actually had the gall to describe Mittal’s money as ‘monkey money.’”

Abraham also noted that Arcelor sought an alternative deal with a Russian steelmaker, recalling that Dollé praised that firm’s owner as “a true European.” Khanna believes that countries’ levels of protectionism may ebb and flow with the political climate. Foreign business interests may become a target. “If you’re a politician and things aren’t going well economically and you want to get re-elected, an easy group to beat up is foreigners. They don’t vote.” This is true everywhere, he added, both in emerging markets and the developed world.

Along those lines, Abraham referred to the 1993 American movie Rising Sun, which he said played on popular sentiments of the time by portraying how Japanese business interests were “taking over everything in the United States. … It’s the flavor of the year, whether the Japanese or the Chinese or the Indians; it goes through these cycles.”

In looking at current trends, Khanna said that protectionism “seems to be in great danger of rising,” calling it “one of those insidious things that we need to be vigilant about at all times.” He cited several potential contributing factors, including the increasing dominance of the far right and center right parties in Europe, a large number of “political and economic hotspots” in the world, and a general economic slowdown. This may lead to an environment, he said, in which countries “tend to favor the locals and batten down the hatches.”

The Danger of Blocs

Both Harrison and Abraham see a trend toward preferential or regional trading blocs rather than multilateral global free trade, and predict it will continue. Harrison said the world is “clearly moving in the direction of … three giant blocs, with the Americas in one bloc, Europe in another bloc and Asia in another.” She noted that this trend benefits countries such as the U.S., but very low-income countries—those “who are not big enough to come to the table”—typically get left out.

She added that the Trans-Pacific Partnership Agreement (TPP) is an example of a regional trade agreement, and is “truly a way of keeping some countries in and keeping other countries—for example, China—out.” It is an example of “protectionism that is still alive and well.”

Abraham agreed, noting, “The U.S. wants to write the rules of that trade agreement, and then invite China at a later date … But what if China, India and a couple of other countries make their own preferential trade agreement and leave the U.S. out? As the clout of these countries basically goes up, you may see more and more of that.”

This piece first appeared on Knowledge@Wharton.

Jonathan Munemo Professor of Economics at Salisbury University
URL: https://www.brinknews.com/is-free-trade-really-free-why-protectionism-is-alive-and-well/
Get ahead in a rapidly changing world. Sign up for our daily newsletter. Subscribe
​​