Japan’s Decline in Productivity: Can a Change in Work Culture Help? 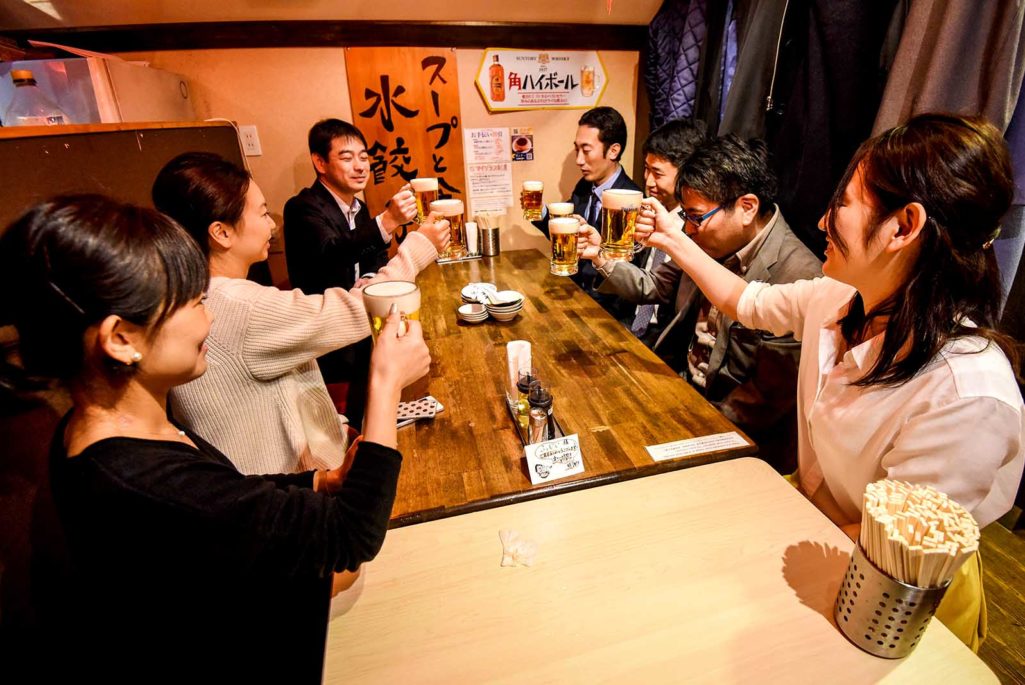 Employees drink at a pub after finishing work at three o'clock in Tokyo. Premium Friday, a work-life balance scheme, is Japan's latest bid to tackle two perennial problems: sluggish consumer spending and notoriously long working hours blamed for a national health crisis known as karoshi, or death from overwork. Premium Friday calls on employers to let staff off around 3:00 pm on the last Friday of every month.

Japan is taking specific measures to tackle the consistent drop in productivity. The measures may appear enigmatic in the eyes of non-Japanese observers, but they aim to transform the harsh culture of overwork that has notoriously symbolized corporate Japan.

With the easing of this culture, the government expects people to focus on activities beyond work. While it may sound like a roundabout way to enhance consumer spending, it does touch upon the fundamental cause of Japan’s low productivity.

While Prime Minister Shinzo Abe wants Japan to reach a gross domestic product (GDP) of 600 trillion yen ($5.35 trillion) by 2020, the projections are showing otherwise. Once the second largest economy in the world, Japan is predicted to drop to number five by 2050 in terms of GDP after China, India, the U.S. and Indonesia.

Japan’s shrinking population has been pointed out as one of the key reasons for the drop in GDP. The United Nations expects Japan’s population to fall from 126 million to 83 million by 2100. Exacerbating this issue is the rapidly shrinking labor force in the country.

GDP per capita, while it has increased, has grown relatively slowly compared to other countries. According to the OECD, it reached $40,737 in 2015, reflecting an increase of more than 97 percent since 1991 ($20,676). These are respectable numbers, but while Japan was ranked sixth globally in terms of per capita GDP in 1991, by 2015 it had dropped to number 18.

And in terms of GDP per hour, Japan was ranked 20 in the world in 2015—the lowest among the G7 countries. Interestingly, Japan has never boasted of a high GDP per hour on a relative basis—it was ranked number 20 in this regard even in 1991.

The Dark Side of Working Culture

Corporate Japan is not known for its efficient working culture. We continue to hear stories about employees in blue chip companies reaching their offices at 8 a.m. only for the sake of showing up before their bosses. In the evenings, employees dare not call it a day before their bosses do. Sometimes, teams gather at 8 a.m. on a Saturday—not to close a billion-dollar deal—but because their boss wants to take them to task for the previous week’s performance.

To make matters worse, this unproductive habit tends to be passed over to the next generation, as junior corporate victims often strive to do the same to younger employees when they become more senior.

The latest manifestation appeared in a recent edition of the business magazine Aera. The cover story on Toshiba’s demise carries confessions by employees and ex-employees, including stories about employees being discouraged from standing out or expressing their individuality or about being told to “obey the seniors and not express their [own] opinions.” One of the articles in the publication compares the hyper-hierarchy at the company to that in the Japanese military during World War II.

However, such a hierarchical culture has been waning gradually. As younger generations are generally more independent and individualistic, employment mobility has increased somewhat, although it is still slower than in other developed countries. Only very conservative companies still retain the older working culture, and in fact, the number of companies with a more liberal working environment is increasing.

Both the Japanese government and media have elevated Japan’s harsh corporate culture to a national political issue.

The Japanese media has played a role in countering the harsh corporate culture in Japan, elevating it to a national political issue. Terms such as “pawa-hara” (power harassment) and “black kigyo” (companies with oppressive working environments) have become buzzwords and have created greater social awareness about corporate culture since the early 2000s.

One notable example of policymakers adopting this method is the “cool-bizu” (cool business). In 2005, then Minister of Environment Yuriko Koike—the current governor of Tokyo—advocated new business fashion to save energy (which in reality meant shedding suits and ties). The crux of this policy was to encourage corporate offices to maintain a temperate of 28 degrees C in the summer. The civil servants in the Ministry of Environment even wore aloha shirts to show support. Cool-bizu soon became a norm. In fact, people who wore ties during the summer were not considered environment-friendly (or, more importantly, were not seen as harmonious, cooperating individuals).

Later, the Shinzo Abe administration in 2012 used the word “rifure” (meaning reflation) repeatedly to make it look like a cutting-edge doctrine that would save the economy.

Rifure, expected to increase consumer spending, is a component of GDP per capita uplift. One of the reasons consumer spending is not increasing as desired is because workers are staying in their offices. If productivity in the offices were high enough to cloud out the opportunity loss for consumption, there would be no worries. However, that is not the case. Hence, the government has decided to encourage workers to leave their offices and do something else.

The Abe administration recently came up with “Premium Friday,” which encourages companies to have employees leave the office at 3 p.m. on Fridays. This is not a regulation and is merely an idea, but it carries weight as it is campaigned for by the government.

The government likely believes its Premium Friday initiative can lead to a change in working culture, and it is probably right. It also hopes that reduced working hours will boost consumer spending and potentially increase productivity. According to one study, the increase in consumption on the back of the initiative could boost GDP by JPY63.5 billion ($570 million) a year.

Of course, there are other government actions that support the campaign. How the government reacted to a tragic suicide of a young employee in 2016 is very telling. Death by overwork—also referred to as “karoshi”—has embarrassingly symbolized another dark side of Japanese corporate culture for years. This time, the employer—a leading Japanese ad and public relations company—received unprecedented spotlight: A band of labor regulators marched into the company’s headquarters for an inspection and televised the visit. Company senior executives were penalized, and Prime Minister Abe’s meeting with the family members of the deceased was highly publicized. Although there were 93 suicides and attempted suicides caused by overwork in Japan in the year ending March 2015, this event came to be seen as a symbol of Japan’s oppressive work culture.

However, the same survey revealed a disappointing result for the administration: 81 percent of the respondents said there was “no change” in consumption after labor reforms. The question remains whether fewer working hours—if it grows into a habit from a trend—can lead to an increase in consumption, productivity, GDP per capita, and GDP.

On the flip side, employees could just spend the hours away from work to relax at home. In Japan, fewer working class people are consuming liquor, which is taking a toll on what used to be solid after-work businesses such as karaoke. In fact, the leisure market in Japan peaked out as early as in 1996. Whether the working force will find new activities to spend money on after work remains to be seen.