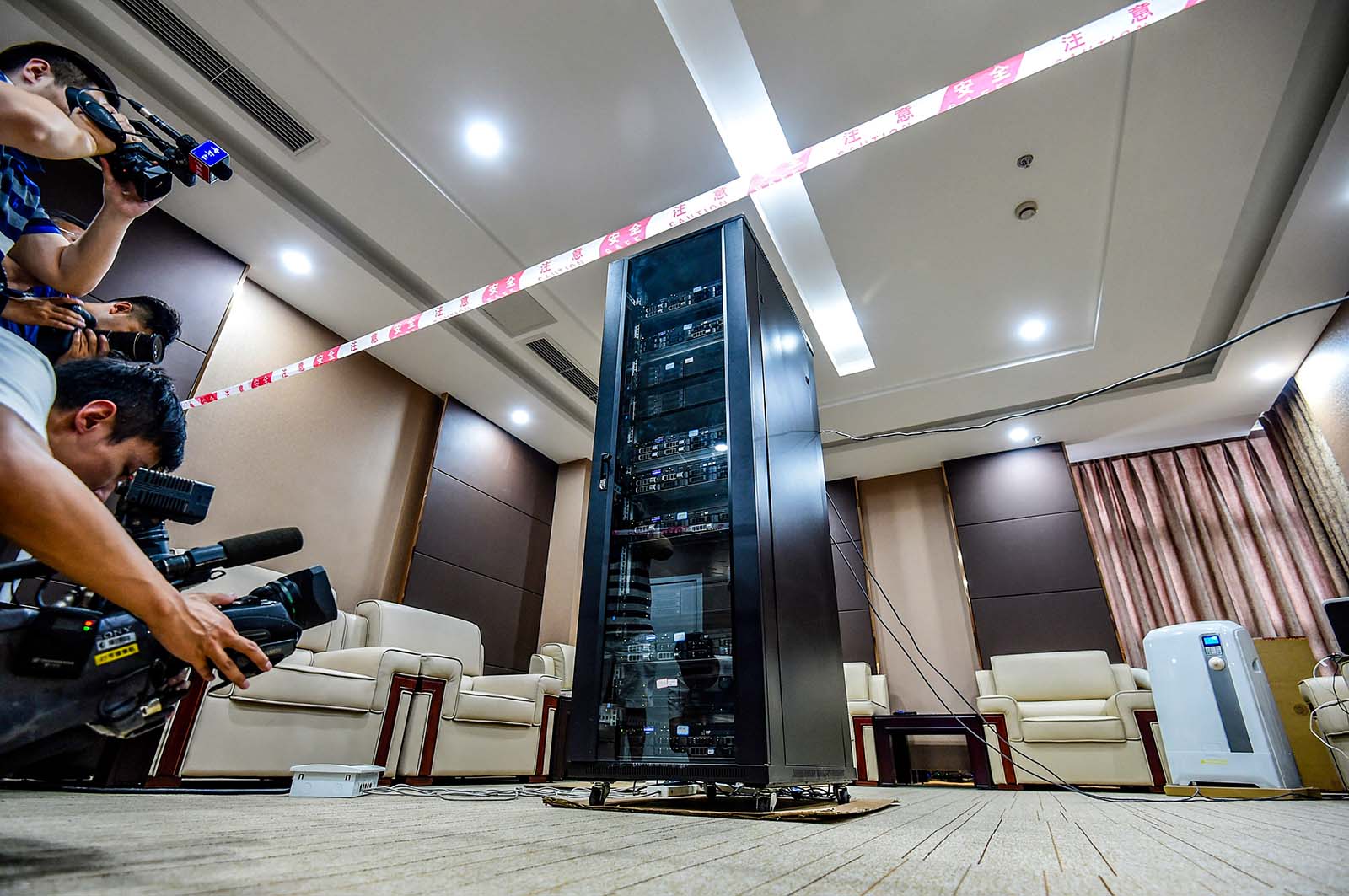 Media film an artificial intelligence machine named AI-MATHS in Chengdu, in China's southwest Sichuan province. Asia is leading in AI investment, but investors should be wary of another tech bubble.

Artificial intelligence is one of the defining technologies of our times, with increasing applications and implications across most industries and day-to-day activities. In many ways, Asia is at the forefront of the innovations and happenings in this space.

Governments are pouring in significant sums of money to bolster technology growth, determined not to be left behind by their peers. Major technology companies, on their part, are making bold investments in R&D and in the acquisition of startups. Meanwhile, low-tech companies are embracing and adapting innovative tech for higher efficiency. And startups are competing for ideas, seeing vast opportunity for growth and exiting through mergers and acquisitions and initial public offerings.

According to PitchBook, $21.8 billion was spent on AI-related M&A in 2017. This is about 26 times more than in 2015. However, the whole AI phenomenon may be confusing investors. The notion that AI will change life as we know it may be blindsiding investors, provoking loose investment behavior without an analysis of the risks.

The Internet All Over Again?

The development and adoption of AI is having an overarching effect across many industries. In many cases, it is reshaping how companies conduct business, driving them outside of their key business areas.

The recognition of the mid-to-long-term trends, however, does not necessarily mean that just any investment into the AI sector will pay off. In identifying the right companies or assets to invest in, investors must think like they would before investing in any other assets: by looking at the fundamentals of the business, performance, business plan, management, pricing, and portfolio mix.

We may currently be seeing signs of overfunding in AI. To begin with, many investors have very ambiguous understandings and definitions of AI, as they tend to swarm into the companies that merely include the term on their websites and press releases. In the fourth quarter of 2017 alone, public companies in the world mentioned “AI” and “machine learning” in their earnings reports more than 700 times. This was seven times more than in the same quarter in 2015.

Opportunistic money managers are taking advantage of this momentum, raising (sometimes too much) capital and pouring (occasionally excessive) money into these companies. This could very well lead to the next bubble, similar to the one that burst at the end of the Internet craze.

Episodes that are leaked to the public raise concerns over the creation of a bubble. For example, it was reported in January that a Chinese AI startup with a few staff and without a clear product attracted $25 million in fundraising that valued the company at a whopping $800 million.

Separately, in February, what was once declared by IBM as AI’s eradication of cancer was reported to have fallen apart in a setback for the field.

But 2017 saw a frenetic pace of investing in this sector. Funding to AI startups increased by 141 percent over 2016. Almost half of this funding was accounted for by China, which surpassed the U.S. for the first time. China’s share of AI funding globally increased from 11.3 percent in 2016 to 48 percent in 2017—an indication of investor interest in AI in China.

The euphoria around investing in AI is reminiscent of the Internet in the mid-to-late 1990s. Many were overwhelmed by the technology, predicting transformational change. While many of these predictions (such as the gradual diminishing of printed materials) have been realized since then, back then, there was no way to single out companies or assets that would benefit from the newly created digital paradigm.

But that did not stop dotcom companies from drawing investors, resulting in the dotcom bubble, which burst in 2002. The Internet was indeed transformative, and presently leading technology companies such as Amazon enjoyed early expansion during the bubble era. But many investors also lost a fortune when the bubble burst because they didn’t select the right companies, overlooking the basics of investing.

Investors should be cautious when they see the term “AI” in potential portfolio companies. Sensible investors should consider a series of factors: a solid business plan, the quality of the management team, and an understanding of the risks posed by new technologies (this last element should prompt them to diversify the assets in their portfolio accordingly). Finally, investors must remember that the price of an asset may significantly exceed its value, especially when interest rates are low and the market index is soaring.

However, it isn’t just the bright—but vague—prospects that drive massive investment into AI. There is a degree of certainty in terms of timing investments in target industries, on the back of government initiatives.

In 2011, the German government kicked off the Industrie 4.0 project: AI was one of the focal points of the initiative. Originally designed to compensate for the lack of labor in Germany, it has inspired other developed countries such as France and Japan to adopt their own versions of the project. The most formidable one was launched by China as Made in China 2025.

Exhibit 2: A Small but Growing Group of Countries Are Investing Heavily in AI

So we are now seeing technologies endorsed by governments; therefore, they can be considered to have a greater chance of success and implementation. The technologies targeted in this context bring investors one step closer to identifying at least which industries to invest in, if not specific companies.

Competition among countries for AI technology is growing fierce. In 2016, the U.S. government issued an R&D strategic plan for AI. In 2018, China unveiled another plan to create an AI industry worth $150 billion by 2030. Other countries such as the UK, Germany and Singapore, among others, are following suit. While government endorsement does not guarantee success, it does provide confidence to companies and investors. Last month, Chinese AI company SenseTime, which focuses on innovative computer vision and deep learning technologies, became the highest valued AI startup in the world as it raised more than $3 billion from investors. However, this may have been made possible by China’s standing as the global front-runner in the adoption of facial recognition technology.

One of the underlying factors in the rush for investments in AI is perhaps a sense of inevitability that this technology can transform the way the world functions. There is no doubt that AI is a game-changer.

What we are seeing now is a form of momentum investing, which can work if investors read waves and cycles very well. However, such investing can also result in investors becoming the victims of waves and cycles—or even the possibility of a bubble bursting.

Investors should pick companies that leverage AI to shift their business models or enable new products and services and diversify their portfolios. Among AI-focused companies, there may be a future Amazon. But there may also be a future Xcelera.com, whose stock rose 74,000 percent in a year, only to be delisted four years later.

Reid Blackman Author of "Ethical Machines"
URL: https://www.brinknews.com/investing-in-artificial-intelligence-risks-and-considerations/
Get ahead in a rapidly changing world. Sign up for our daily newsletter. Subscribe
​​