Populism as Contagion in the Global Economic Order 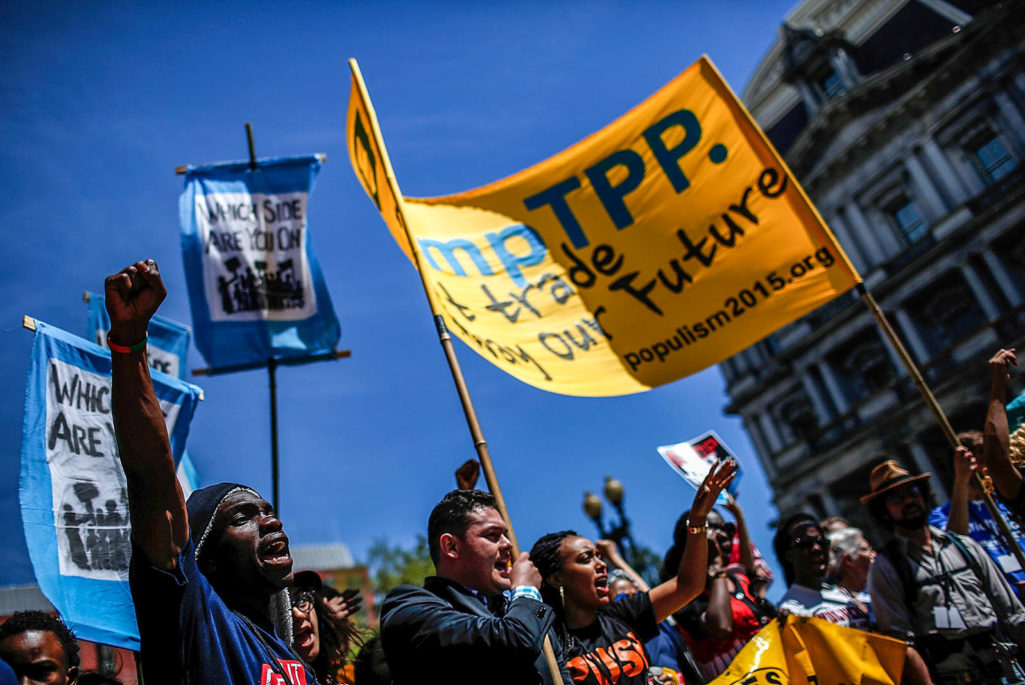 Protesters take part in a "Don't Trade Our Future" march organized by the group Campaign for America's Future April 20, 2015 in Washington, DC. The event was part of the Populism 2015 Conference which is conducting their conference with the theme "Building a Movement for People and the Planet."

A recent wave of populist sentiment has washed over the U.S. and Europe, exemplified by this year’s presidential election in the States and the Brexit vote in the UK.

Political outsiders in presidential campaigns date all the way back to Andrew Jackson, but the 2016 presidential election seems to stand out from past contests. Hillary Clinton, who has been favored to win the election in nearly every poll since her nomination, has battled political outsiders running to her left and right since the primary.

While the respective platforms of Sanders and Trump are ideologically at odds with each other, the two candidates share a key characteristic: they both rode waves of populist discontent during their campaigns.

At a recent Brookings seminar titled The Future of the Global Economic Order in an Era of Rising Populism, Daniel W. Drezner, a nonresident senior fellow at Brookings, described this kind of populism as “anger at [the] status quo set of policies and … institutions supporting those policies.” He also emphasized the economic nature of this anger: “I think you can see it bleeding over into hostility [due] to rising levels of economic inequality.”

There’s a rising global populism ‘bleeding over into hostility [due] to rising levels of economic inequality.’

“The typical man with a full-time job in the U.S. at the middle of the income distribution who had a year-round job earned less in 2014 than some similarly situated man did four decades earlier,” Atkinson said. “[Even] after all the remarkable recovery we’ve had … there’s still 12 percent of [Americans] who have mortgages [that] are underwater. I mean, [it’s] no wonder they’re angry.”

Trump, in particular, has played to this anger stemming from wage stagnation and the decline in manufacturing. His lightning rod of choice when acting as its conduit? Global trade.

“We can’t let the world take advantage of us from an economic standpoint, and that’s what they’re doing,” Trump told CNBC earlier this year. At a Pennsylvania rally in June, Trump declared, “They get the expansion; we get the joblessness. That’s the way it works—not going to happen anymore.”

It’s no surprise, then, that Trump and his supporters have attacked the Trans-Pacific Partnership.

“People have associated things like TPP and the [World Trade Organization] with somehow giving up our national sovereignty,” said David Wessel, director of the Brookings Hutchins Center on Fiscal and Monetary Policy. “If people don’t have confidence that [leaders are] actually going to serve their national interest, then you get this” kind of populism.

The same sentiment of global-weariness motivated Brits who took to the polls in June to vote in the Brexit referendum. The Leave Campaign, led by figures such as Boris Johnson and Michael Gove, capitalized on widespread anxiety over immigration and job security by blaming the policies of the EU. Similar to the populist fervor on the other side of the Atlantic, the populism that tipped the Brexit referendum was largely made up by older white, working-class voters.

“You can see in the Brexit vote that those areas that had the weakest wage growth tended to vote for Leave,” said Atkinson.

A growing concern among economists, business executives and world leaders is that the populism that motivated Britain—one of the strongest economies in Europe—to leave the EU might prove to be contagious.

According to Drezner, the Brexit referendum was as much about British independence as it was about the fiscal austerity promulgated by Brussels—a set of policies that Drezner describes as an “unmitigated disaster.” If the same populism spreads to countries hit hardest by EU austerity, Brexit may not serve as a cautionary tale, but as an inspiration.