Public Views of US Business Sectors Are Plummeting 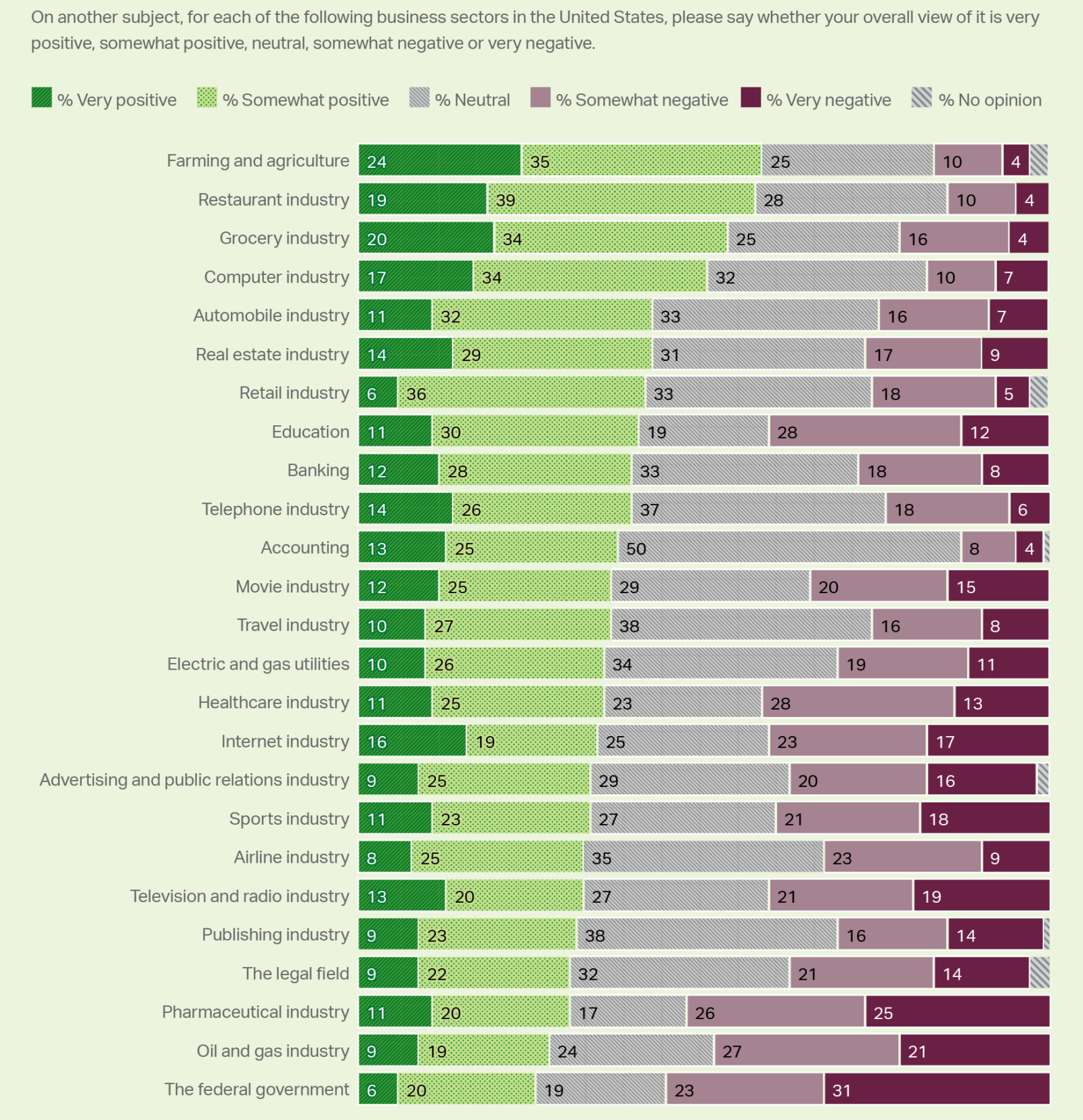 Americans rated U.S. business industries at their lowest points since 2011 during the COVID-19 pandemic. The average record-low, according to Gallup, was during the 2008 Great Recession at 34% — just five percentage points lower than the current average of 39%.

Of the 25 industries ranked, the federal government, the most negatively rated industry since 2014, was again viewed the most negatively by the American public at 31%, followed by the oil and gas and pharmaceutical industries. This year, Americans rated a mere four industries positively — farming and agriculture at 59%, restaurants at 58%, the grocery industry at 54% and the computer industry at 51%. In the past three years, farming and agriculture and the restaurant industry were the top-ranked sectors.

Public sentiment toward certain sectors is related to how they responded to the pandemic, states Gallup. However, as a whole, the public has trusted businesses more than other institutions during the pandemic. 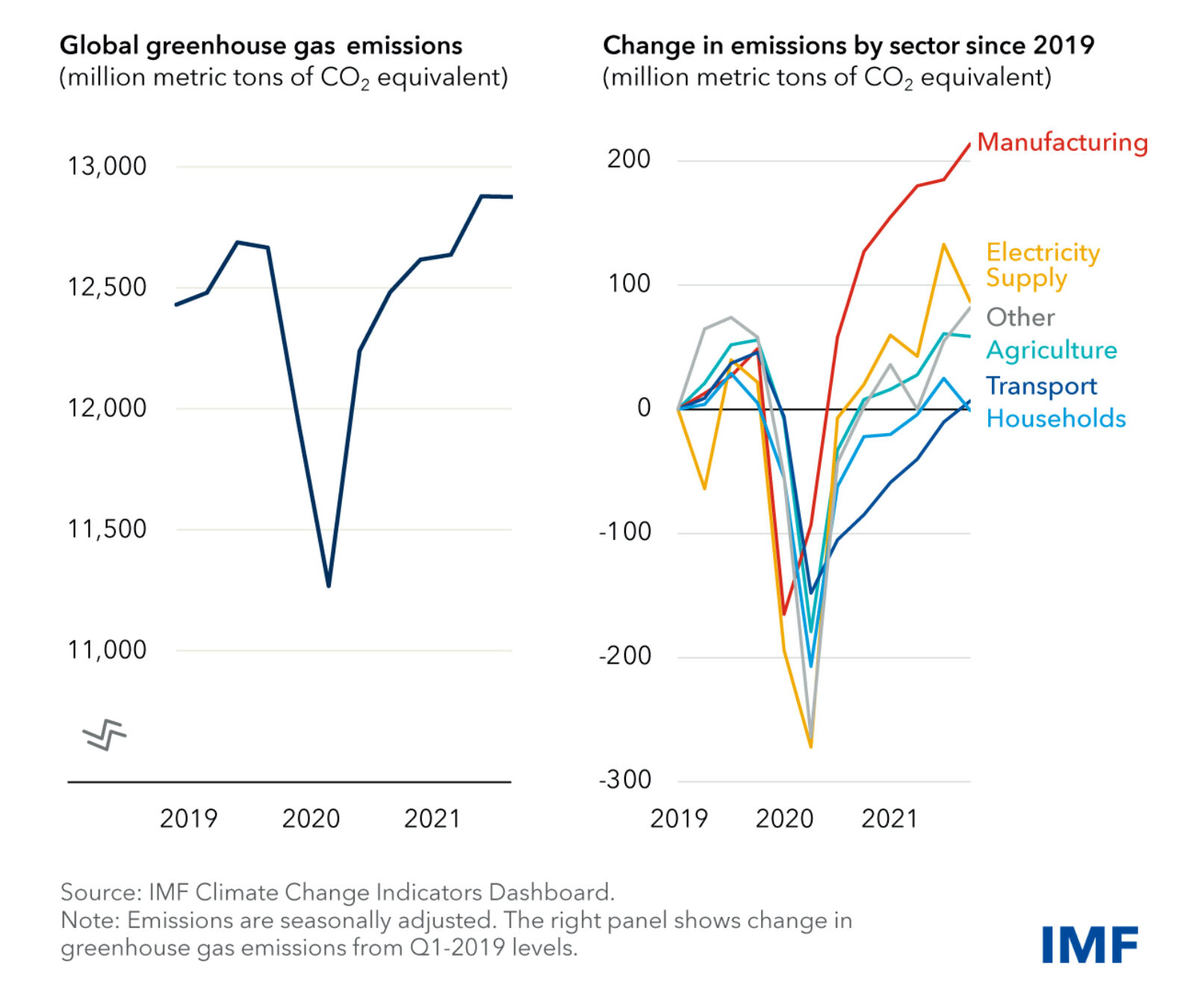 Industry, as opposed to individuals, was the most significant contributor to emissions in 2021. The manufacturing and energy sectors had the greatest increase in greenhouse gases, while transportation and household levels rose more modestly as COVID-19 restrictions continued.

The Intergovernmental Panel on Climate Change’s latest report warns that greenhouse gas emissions must peak by 2025 at the latest — and decrease 43% by 2030 — in order to limit global warming to 1.5 Celsius. Limiting global warming “will require major transitions in the energy sector. This will involve a substantial reduction in fossil fuel use, widespread electrification, improved energy efficiency, and use of alternative fuels (such as hydrogen),” said the IPCC.

The Riskiest Cities for Business Are in the Americas 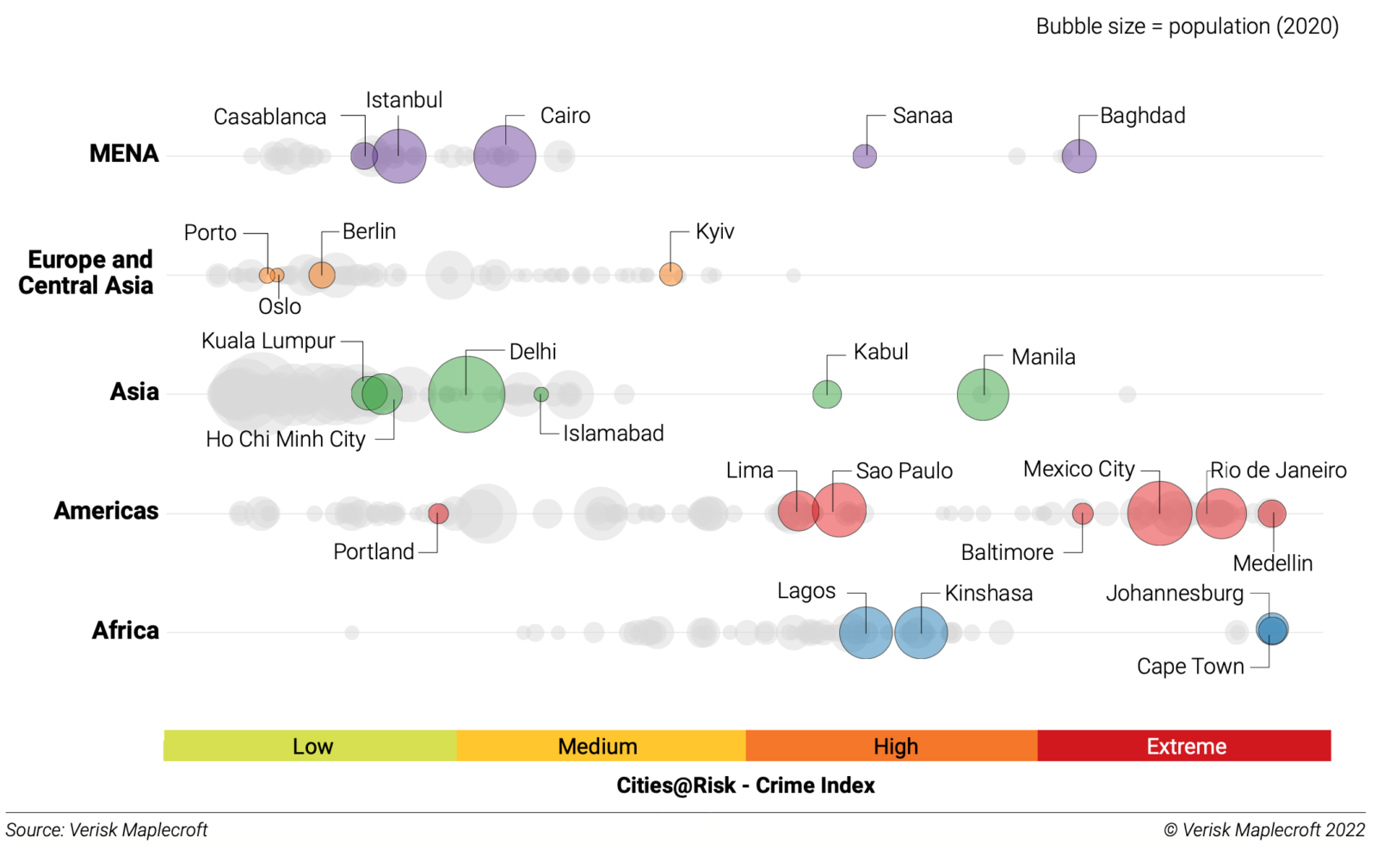 Latin America has more than 60% of the most crime-stricken cities in the world, and crime risks are also rising in the U.S., according to analysis from consulting firm Verisk Maplecroft.

Maplecroft analyzed which areas of the world present the biggest security threats to companies and their employees, assets and supply chains. The 100 most dangerous cities are distributed over the globe, with 33 cities from the Americas, 33 from Africa, 19 from Asia, 14 from MENA, and one from Europe (Kyiv).

Sixty-two of the 100 riskiest cities are in Latin America, with eight cities — including Chihuahua, Medellín and San Salvador — receiving the highest possible risk scores. U.S. cities also performed poorly compared to similarly high-income cities in Europe and East Asia. Cities that featured prominently in their risk index include Baltimore, Memphis and Jacksonville. 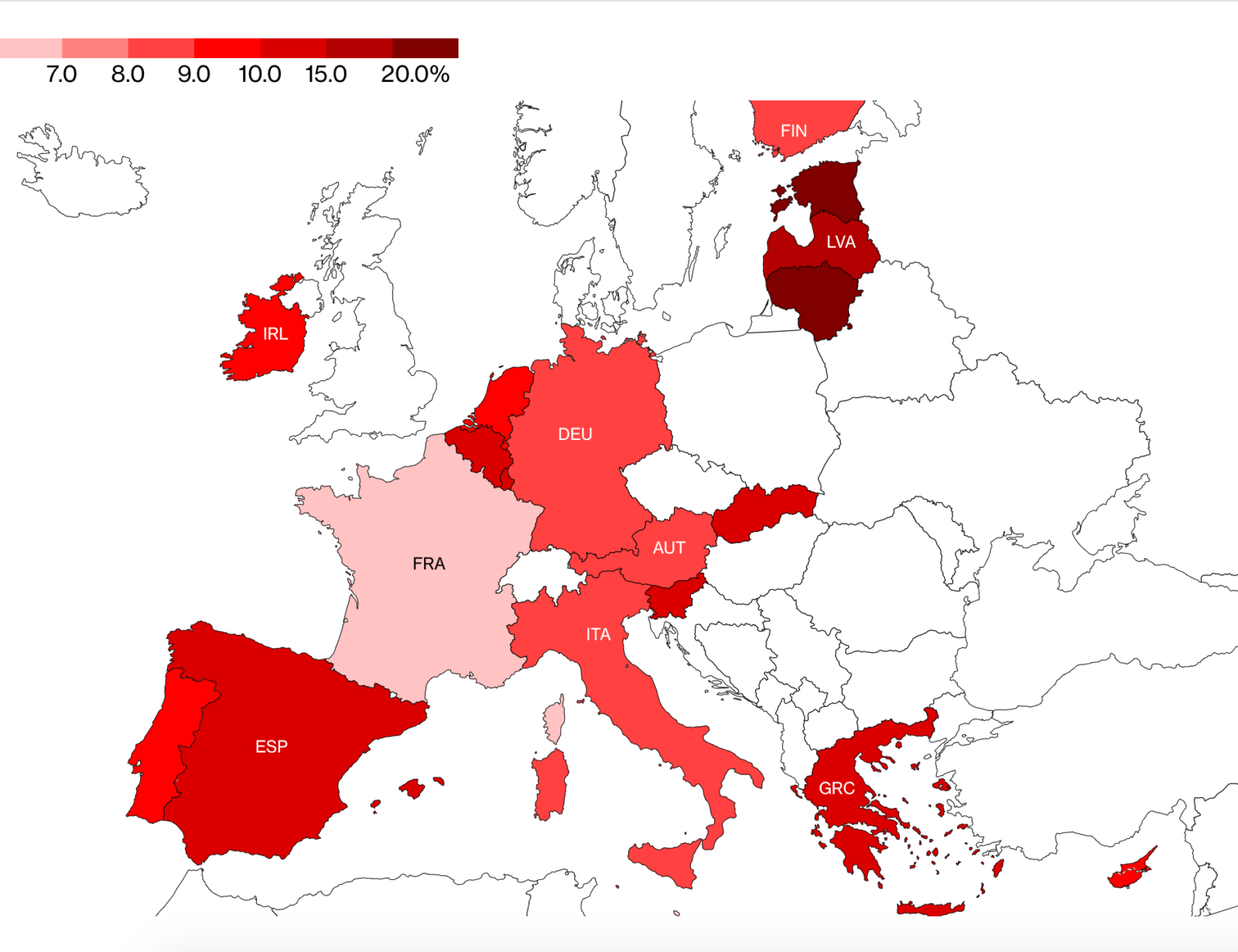 Soaring food and energy costs drove inflation in the eurozone to new highs in June, with consumer prices rising 8.6% since last year. Nearly half of the 19 countries in the euro currency bloc have reached double-digit inflation, including the Baltic region, where prices have risen by 20% or more. Russia’s invasion of Ukraine has pushed oil and natural gas prices up by more than 40%, as EU sanctions reduce Russian energy imports by more than half.

As the cost of living increases dramatically, consumers are cutting back and manufacturers are reporting a drop in sales and demand. In the U.K. alone, inflation has outstripped wages for the majority of workers, with one-fifth of British households saying they are struggling to make ends meet. Countries in the eastern eurozone are particularly vulnerable, including Slovakia, where inflation has risen to 12.5%.

The European Central Bank says it will increase rates for the first time in a decade in an attempt to curb inflation and the deteriorating economic outlook.

The US Doesn’t Have Enough EV Charging Stations 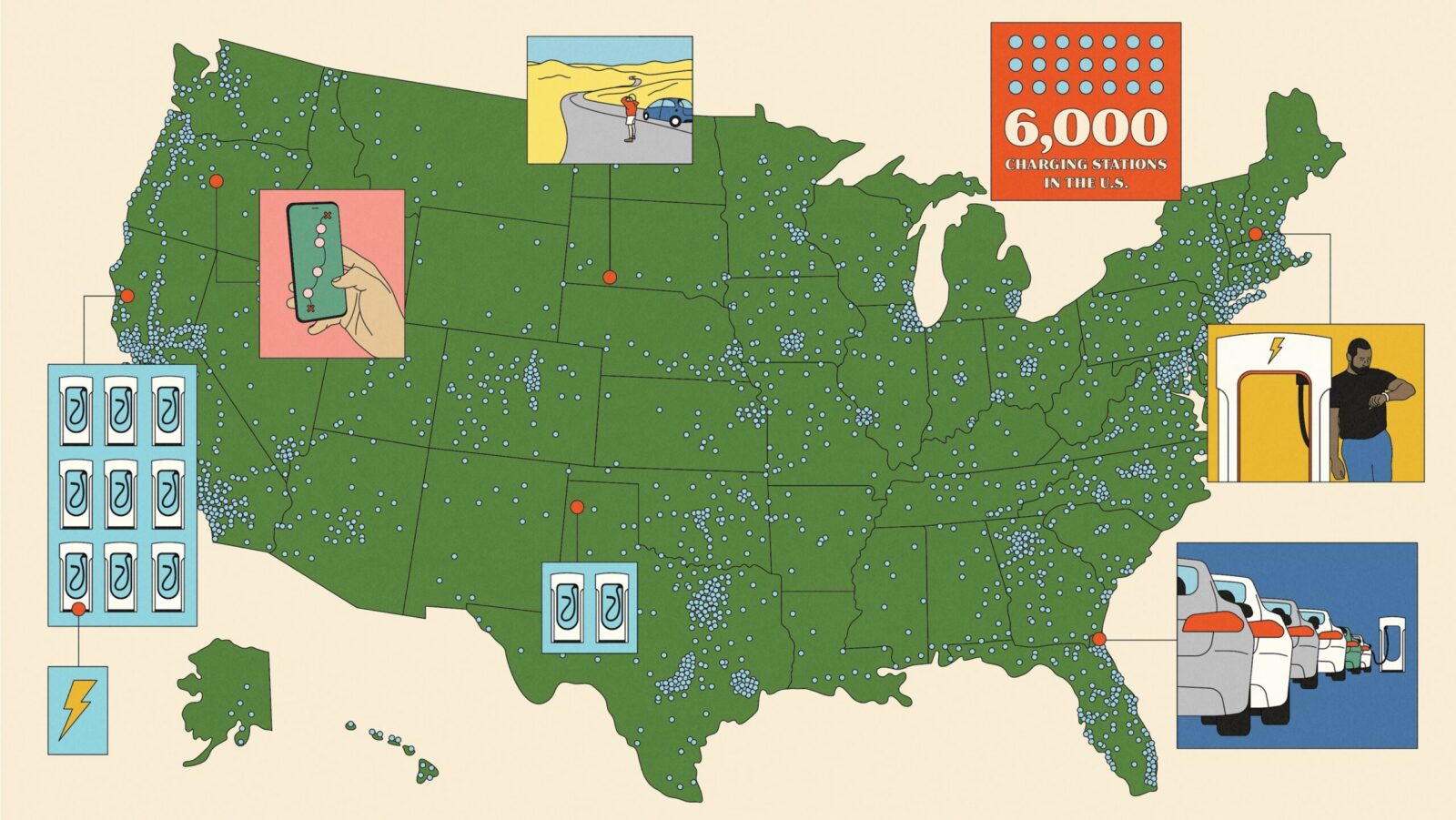 More than 50% of the world wants to buy electric cars, but there may not be enough charging stations to meet demand, MIT Technology Review reports.

The U.S. administration has promised to increase EV infrastructure by adding a half million chargers by 2030. In contrast, there could be 5 million EV battery charging stations across the EU by 2030 — and double that by 2035, according to a report from Transport and Environment.