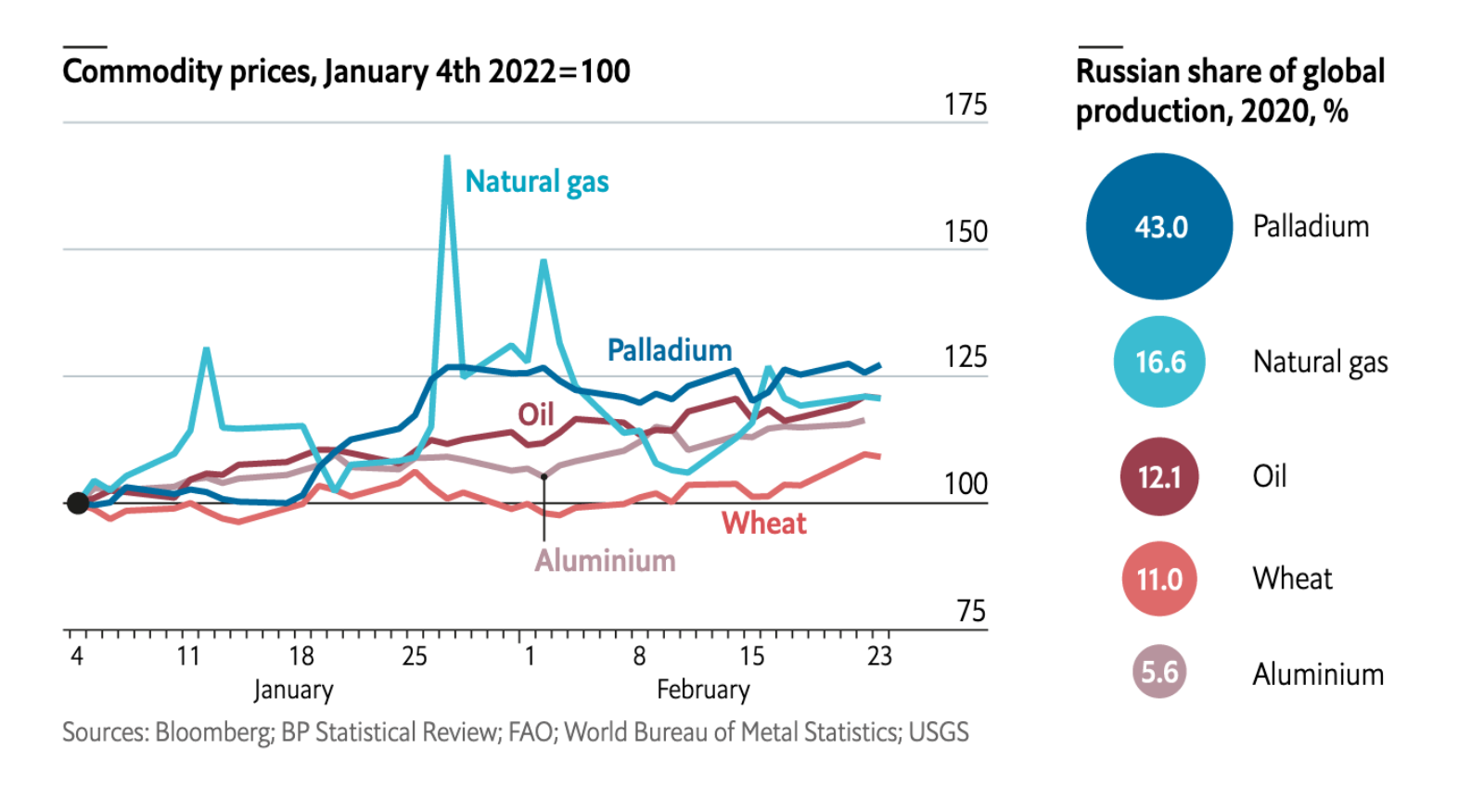 Russia invaded Ukraine on Thursday, and the assault is likely to drive up already high prices on commodities like wheat, natural gas and oil, and metals.

World food prices are already at their highest level in 10 years, especially for wheat and dairy, according to the Food and Agriculture Organization of the United Nations. Russia and Ukraine produce 29% of the world’s wheat supply, 19% of corn and 80% of sunflower oil exports. Much of Russia’s wheat exports (70%) go to the Middle East and Africa, according to 2021 Refinitiv shipping data.

Oil prices will also be affected, as Russia is the third-largest oil producer in the world and the second-largest crude oil exporter after Saudi Arabia. Russia supplies between 40-50% of Europe’s natural gas imports. When tensions between Russia and Ukraine escalated earlier this week, Germany called for a halt on the Nord Stream 2 pipeline, which would carry natural gas to Europe through Ukraine. 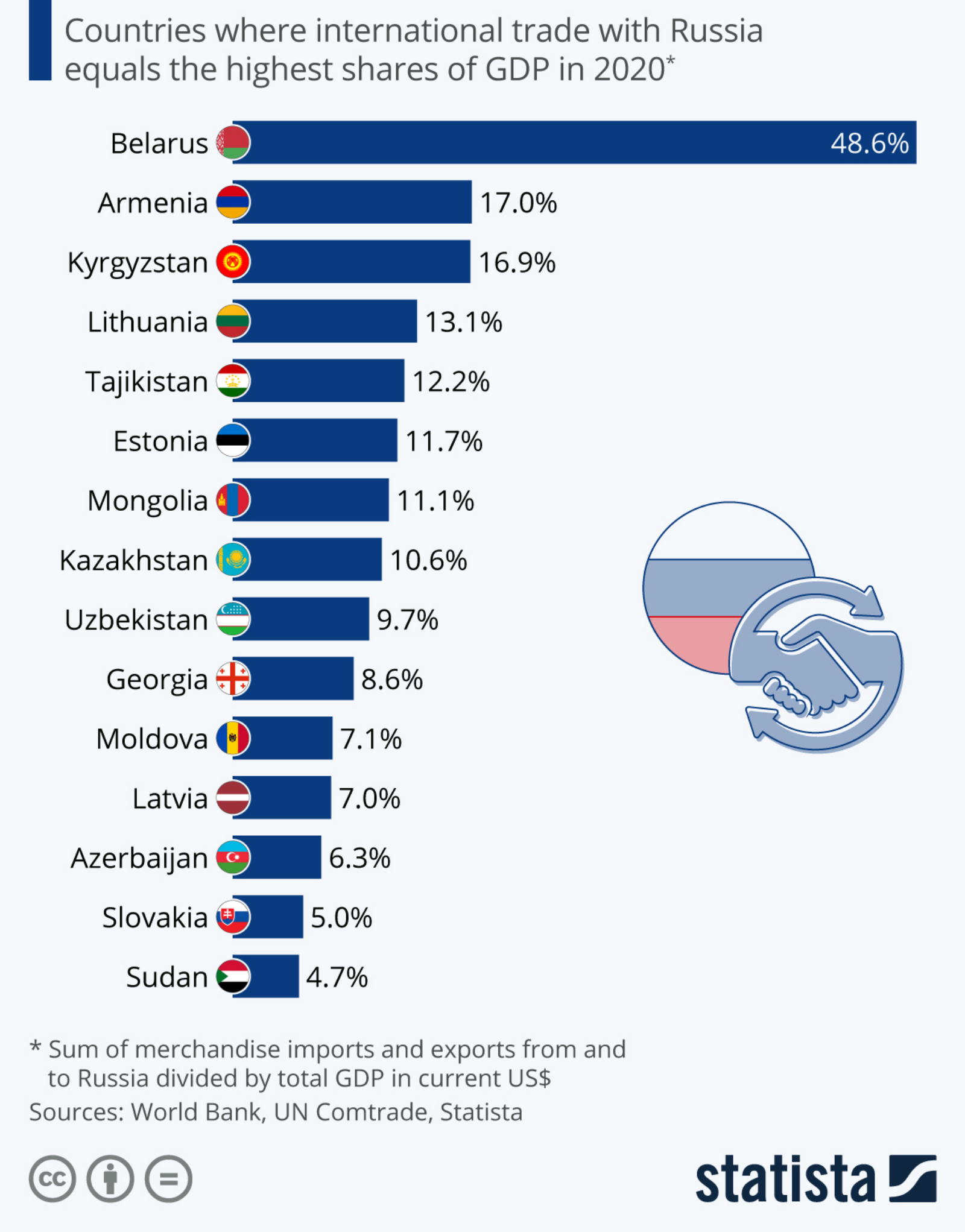 US Concerns Over Conflict in Ukraine Grow 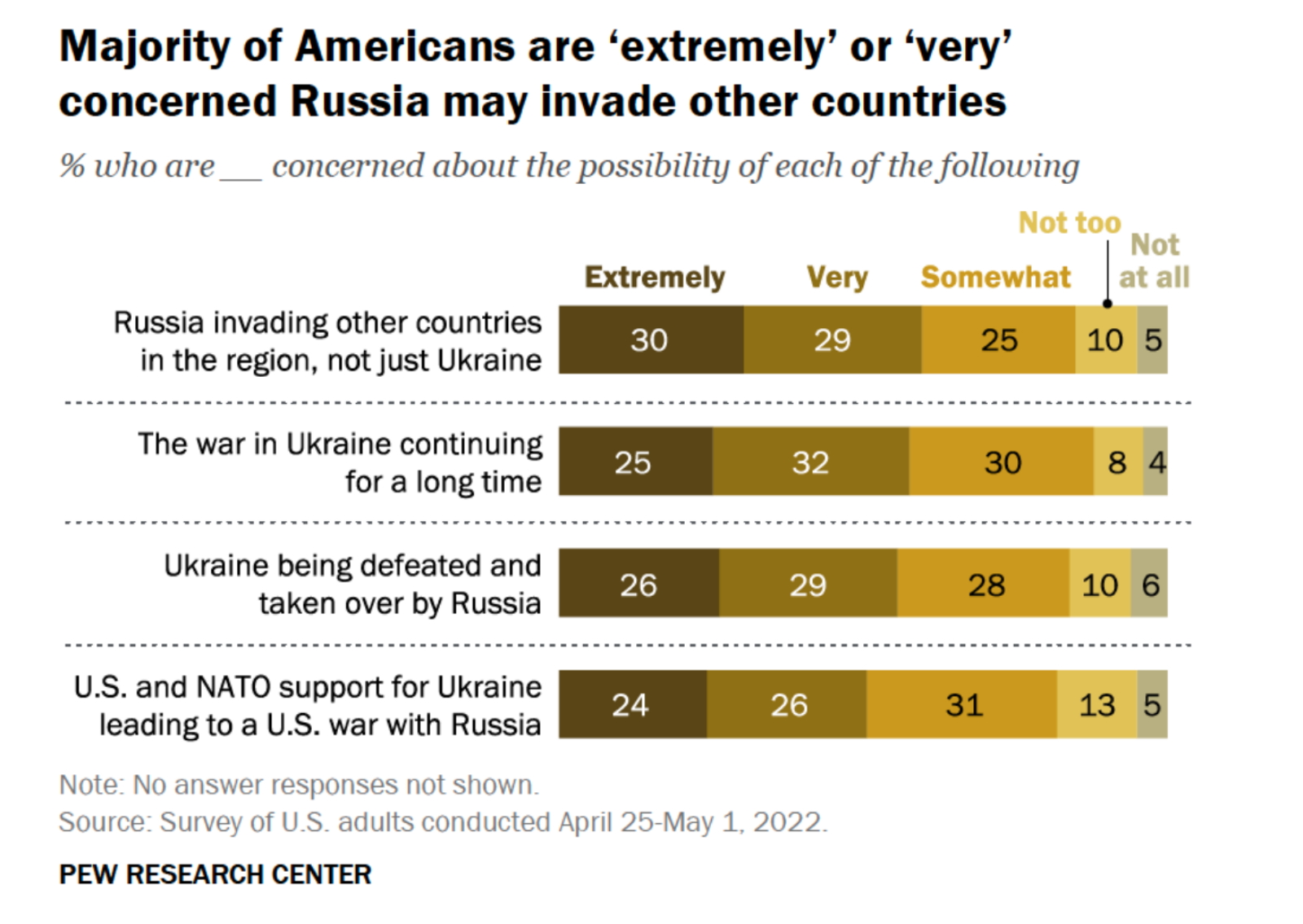 More than half of Americans (59%) are concerned that Russia will invade other countries besides Ukraine, according to a recent survey by the Pew Research Center. Going into its third month, the crisis in Ukraine has led to an exodus of millions of Ukrainian refugees, accusations of war crimes by Russian troops, and disruption of trade and supply chains.

In late April, President Biden proposed military and economic aid to Ukraine. Fewer Americans now say the U.S. isn’t doing enough to support Ukraine than they did in March, with 31% saying the country isn’t doing enough — down from 42%. 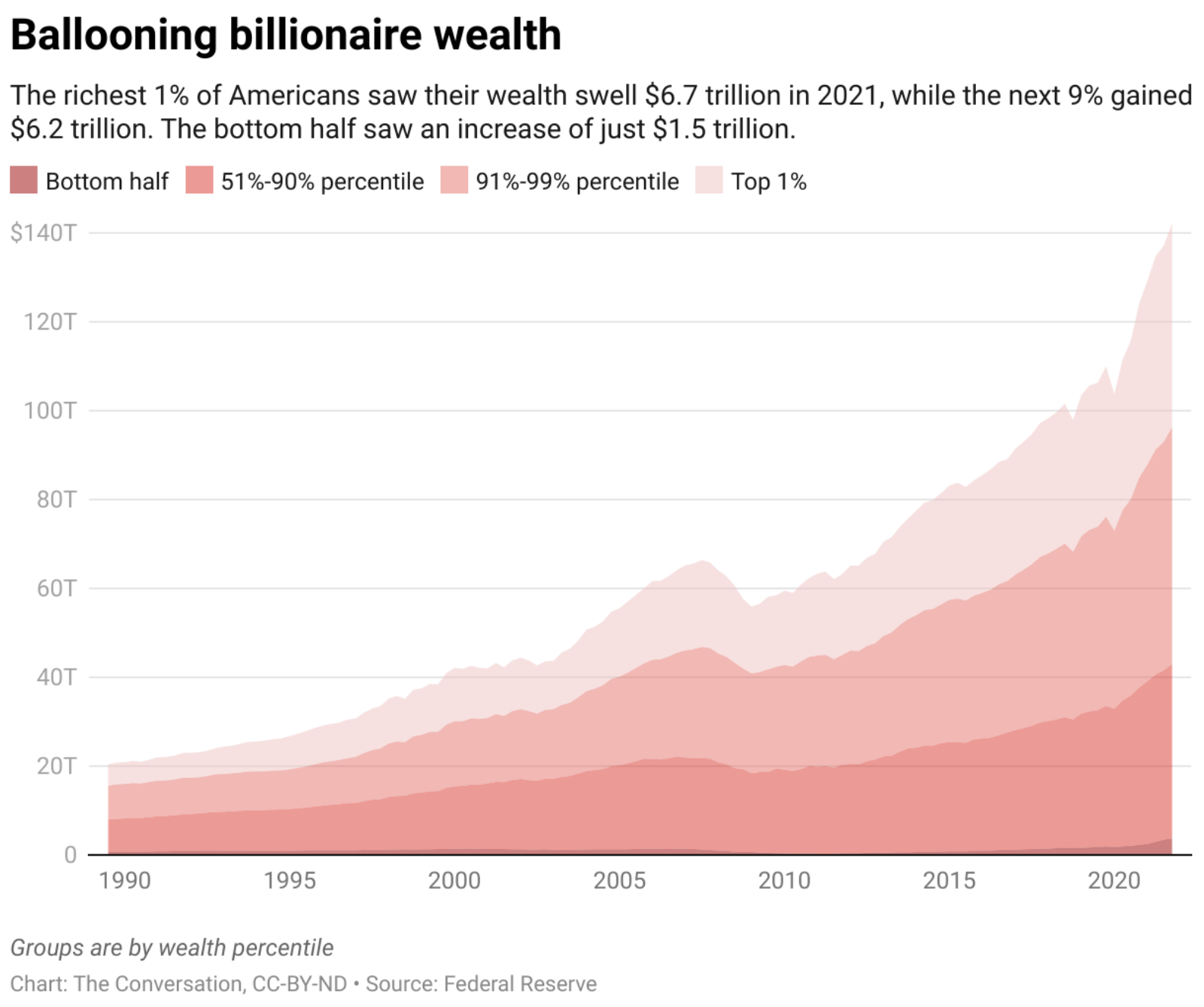 The vast majority of Americans are better off now than they were before the pandemic, but that wealth is distributed unevenly, writes financial economist D. Brian Blank.

Americans overall saw record gains in their personal finances, which increased by over $18 trillion in 2021, thanks in large part to government aid during the pandemic. Billionaires saw the greatest increase in their wealth, driven largely by gains in their stock holdings and businesses. The richest 1% saw their wealth increase by $6.7 trillion in 2021, while just $1.5 trillion went to the bottom 50% of Americans.

But the bottom half of Americans saw their wealth grow at the fastest pace, jumping by 64% in 2021 — the biggest calendar-year growth of any group since 1988. These changes were mostly due to gains in real estate assets, which increased in value faster than mortgage debts during the pandemic. Overall, this gain hasn’t changed the U.S. wealth gap: The bottom half of Americans owned 5.5% of the country’s assets before 2020, and at the end of 2021, they owned 5.9%. 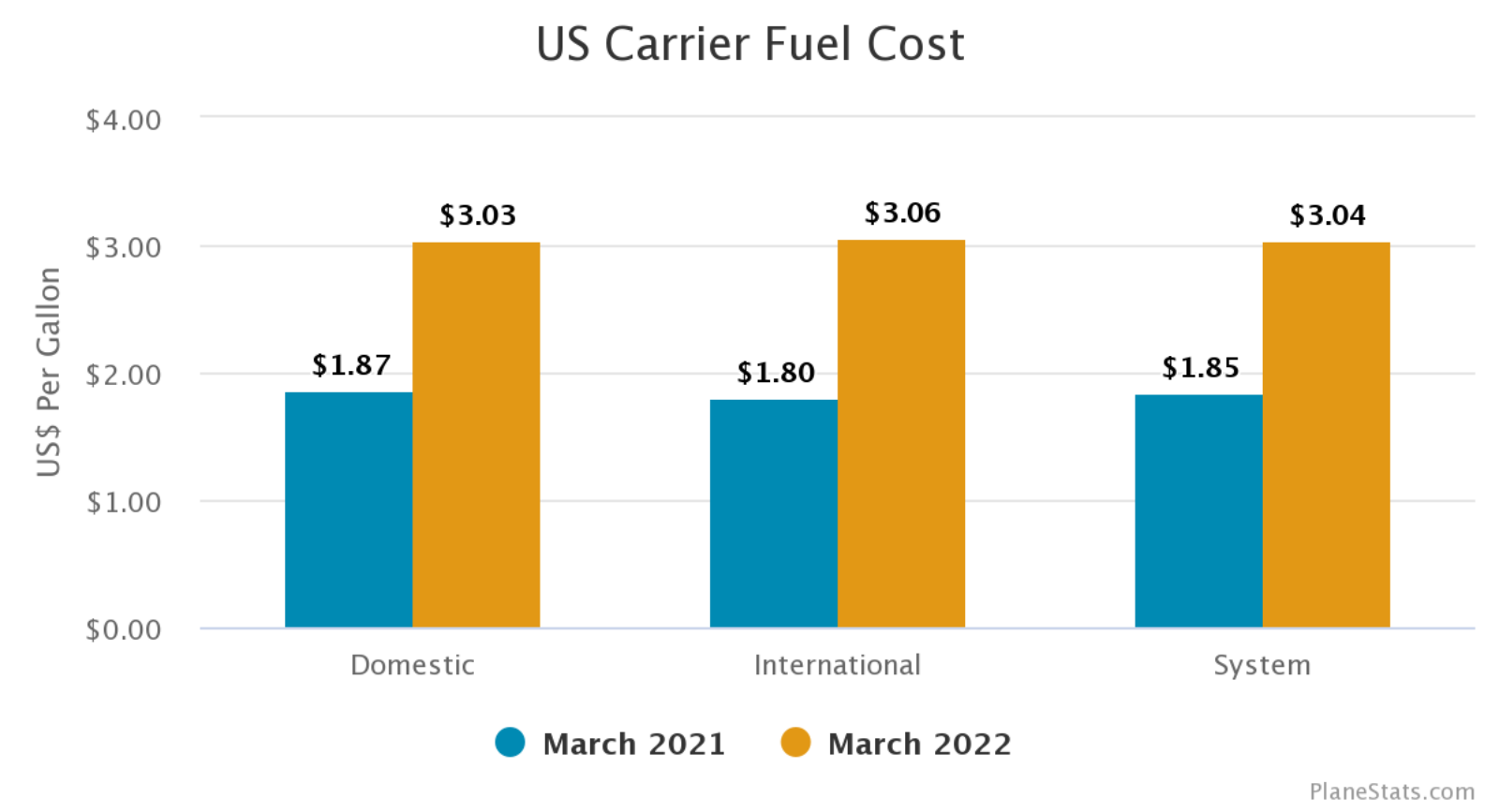 American airlines are paying over $5/gallon for jet fuel as of April 2022, according to the U.S. Department of Transportation and the Energy Information Administration. U.S. carriers reported the average cost of fuel rose in March 2022 by over 64% since the same time last year. Prices have continued to rise as the conflict in Ukraine and sanctions against Russia push energy prices higher.

Fuel prices remained relatively consistent over the summer months of 2021, until a double-digit increase hit in October. The U.S. administration said it is keeping a close eye on prices that could threaten air travel recovery. High jet fuel prices around the world are being passed on to the consumer, slowing the potential recovery from the air travel slump during the pandemic.

Fuel is the second-highest cost for airlines after labor, and airlines typically offset fuel costs with higher fares. Despite higher fares and staffing shortages, demand for travel is surging, and airlines are preparing for another surge in the summer.