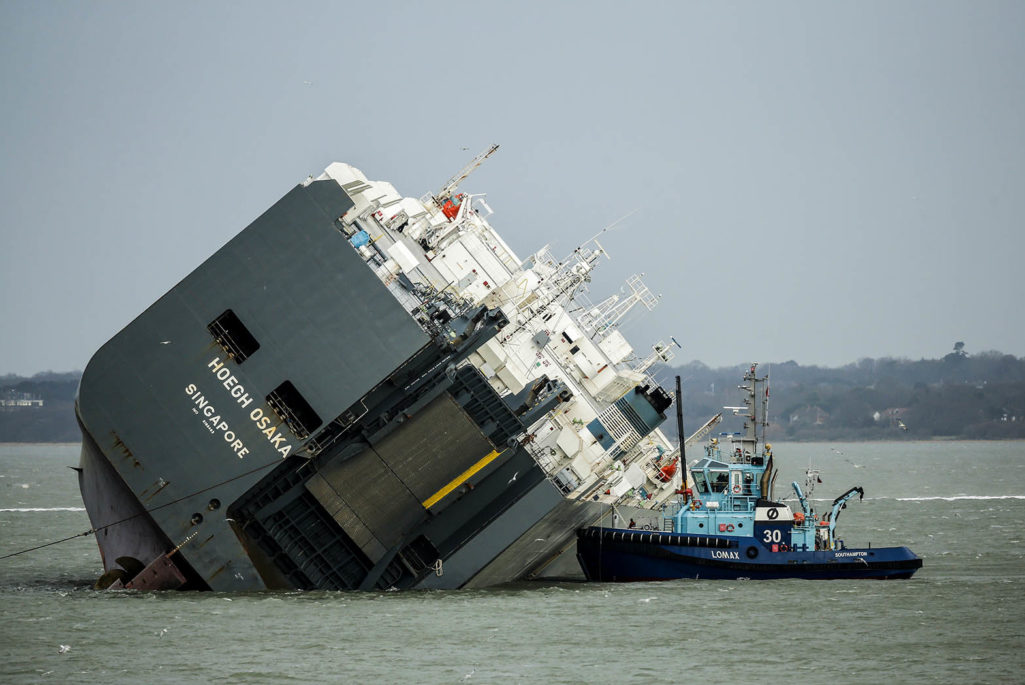 A tug boat sits alongside the grounded Hoegh Osaka cargo ship on the Bramble Bank in the entrance of the Southampton Waters in between Southampton on the southern English coast and the Isle of Wight.

Shipping losses dropped 16 percent overall in 2016, amounting to a 50 percent decrease in the last 10 years, according to a new report. Despite the positive news, a “perfect storm” risk environment continues to plague the industry due to political instability, regulatory constraints and increasing cyber risk, the report says.

“We continue to see improvements in maritime safety, but the price of safe navigation is constant vigilance,” said Captain Andrew Kinsey, senior marine risk consultant at Allianz Global Corporate and Specialty (AGCS), which produced the report. “The maritime sector is entering a period of considerable change and unrest from economic pressures, technology and political factors,” he said in the report. “There is a perfect storm of increasing regulation and narrowing margins.”

The decline in losses is “driven by improved regulation and the development of a more robust safety culture,” the report says, but “disparities by region and vessel type remain. The recent downturn in the shipping economy could also be a factor in benign loss activity.” Although the global number of losses is down, regional “hotspots,” such as South China, Indochina, Indonesia and the Philippines, continue to plague the industry. More than a quarter (23) of the total 85 ship losses in 2016 occurred in these four regions—almost double that of the next highest region (12), the East Mediterranean and the Black Sea. Meanwhile, losses are up year-on-year in maritime regions of Japan, Korea and North China; the East African Coast; the South Atlantic and East Coast South America; and the Canadian Arctic and Alaska.

Cargo vessels took the biggest hit in 2016, suffering 30 losses. Passenger ferries losses increased year-on-year to 8. Foundered (sunk/submerged) vessels were cited as the most common cause of loss, accounting for more than half. The report attributed those losses most often to bad weather; fire/explosion claimed another 8 ships, up slightly over 2015.

“While the decline in the number of total losses and casualties is encouraging, there is no room for complacency, especially at a time of inherent economic challenges,” the report says, citing environmental scrutiny that is producing “record fines” for pollution and new ballast water management rules that are adding “a significant cost” and potentially new risks to shippers, as well as political risk in Yemen and the South China sea “posing increasing threats.”

Meanwhile, the piracy threat is evolving—although the number of ships hijacked is down, crew kidnappings is increasing. In 15 separate incidents last year, 62 people were kidnapped for ransom. Incidents of piracy (191) last year continued a downward trend, dropping 22 percent compared to 2015 (246), representing the lowest total since 1998. “The reduction reflects the success of measures to contain the threat of Somali pirates in the Gulf of Aden and Indian Ocean, including the introduction of armed guards on-board vessels and the presence of a multinational naval task force,” the report says. “There were just two recorded incidents off Somalia in 2016, compared with 160 in 2011.” However, in the first quarter of 2017, pirates attacked 43 ships and captured 58 crew members; more than 60 percent of kidnappings were in the Gulf of Guinea, with Nigeria a hotspot, according to the report. The weakened economic state of global shipping emerged in full force with the collapse of Hanjin Shipping. “Bankruptcies are on the rise and economic strains have led to cost-cutting,” the report says.

The report warns of an over-reliance on technology as safety-enhancing technology is finding its way into shipping. “This could bring huge benefits, as it is estimated that 75 percent to 96 percent of marine accidents can be attributed to human error,” the report says. “A number of incidents have occurred where crews have relied too much on technology, particularly involving electronic navigation tools.”

The ever-increasing reliance on technology is also elevating the risk of cyber attacks. “To date, most attacks have been aimed at breaching corporate security, rather than taking control of the vessel but there are concerns that a major cyber-attack of this nature could occur in future,” the report says. “Cyber security should not be neglected at a time when crew, training and maintenance budgets are already under pressure. Standard practices, such as crew education and identifying measures to back up and restore systems, should be implemented to reduce cyber risk.”

The brunt of the shipping loss problem comes down to human error, which accounted for about 75 percent of more than $1.6 billion in claims over the last five years. And while autonomous vessels might go a long way in eliminating the human element from the equation and revolutionizing the industry, the report says, “on a scale not seen since containerization,” safety considerations will be crucial to the development of autonomous shipping, along with the “challenges around regulation and liability issues,” the report says. “A critical element will be whether there will be sufficient backup if things go wrong.”