Should We Fear the ‘Rise of the Robots’? 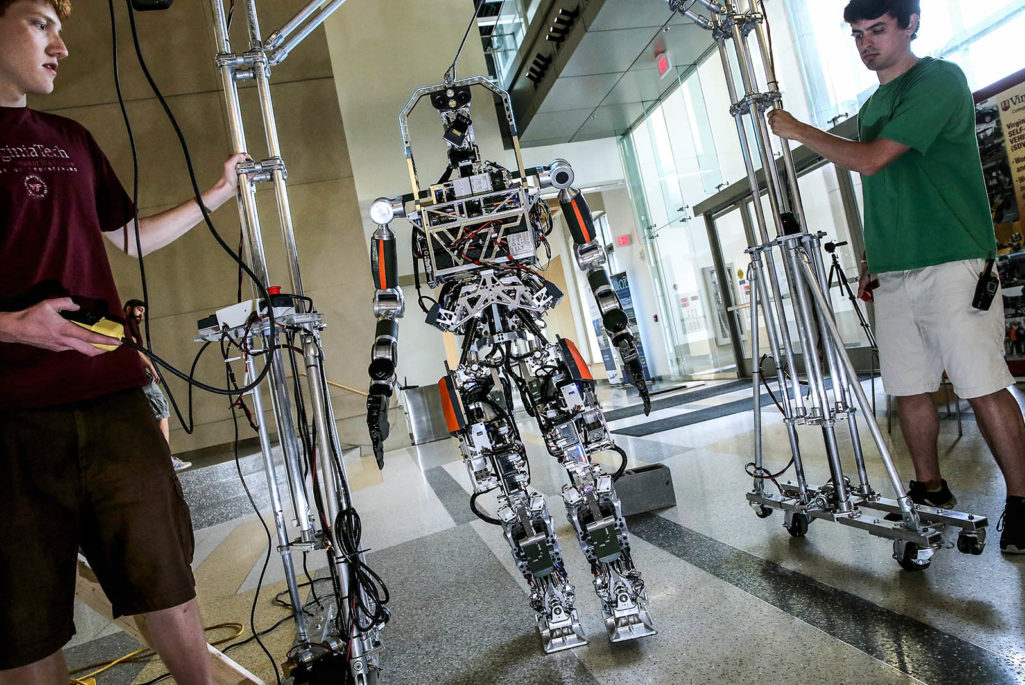 Virginia Tech mechanical engineering students Oliver Ebeling-Koning (L) and Graham Cantor-Cooke test the ESCHER robot. Unlike many of the other 24 international teams competing in the Defense Advanced Research Projects Agency Robotics Challenge, the students of Team Valor have built most of the semi-autonomous ESCHER (Electromechanical Series Compliant Humanoid for Emergency Response) robot from the ground up over the last three months.

Robots are on the rise. Or, at least that’s what the social media buzz, workplace chatter, and in-depth articles have recently reflected.

There’s been an increasing fascination and fear in what role automated technologies could play in the workplace, government, military, and all corners of the public sphere. Some see these major advancements in automated technologies taking time-consuming drudgery out of employees’ workdays, or cutting out human error in dangerous operations. But others worry the breadth of automated options could leave millions jobless, devastating the global economy.

However, while the two sides stand firmly in their beliefs, both agree that this growing arm of automated technologies is in dire need of a formal assessment process—whether it be the responsibility of the government or a private organization.

These two perspectives will be showcased when the Information Technology & Innovation Foundation (ITIF) hosts a webcast debate between ITIF President Rob Atkinson and Wendell Wallach, a Yale University scholar and author of the new book A Dangerous Master: How to Keep Technology from Slipping Beyond Our Control.

BRINK spoke with both experts on their attitudes toward the growing automation trend to get their perspectives on what the future may hold.

Fear of job loss to automation has been an anxiety since the beginning of industry. So why has it become such an urgent discussion topic over the past year?

Rob Atkinson: A few reasons. Technology use is broadening its reach. It’s no longer impacting just a few areas of the market; it’s present in most workplaces. And people believe their jobs could be at risk, so they’re paying attention.

The nature of the media today is self-reinforcing. We’ve become a society where when something new is created, and its 90 percent successful, people focus more on the negative 10 percent. This kind of thinking leads you down the wrong path. We have to embrace the challenges and move forward.

Wendell Wallach: Unlike previous fields of innovation in the U.S., most emerging technologies are not limited to a single industry sector or application and change the face of work. Already, we see a stagnant job market—there have been no wage increases in four decades— and people are living longer, and less inclined to retire early. Robotinization is already making serious impacts on the population. There are too many accumulating signs we can’t ignore.

Some 47 percent of present U.S. jobs could be computerized in the next 10 to 20 years, according to a 2013 Oxford University study. While Atkinson sees technology freeing employees’ time to work on more important or creative projects, Wallach doesn’t think tech will leave much left for workers to do.

Wallach: Technology has moved into the driver’s seat, and will continue to steer in its own direction if we don’t intervene and analyze how to move forward as a society.

It’s a trade-off: Robots that perform onerous tasks are easy to embrace. Smart robots that fill more and more human jobs, and are becoming increasingly intelligent, pose a host of challenges. A light rain shower can be nurturing, but a downpour can be devastating.

Atkinson: These technologies are not dangerous, they’re not our master. We [the U.S.] have recently become Europeanized in the way we address new technologies by looking more at the risks that come with new tech than the fundamentally good innovations that come from them. The upside of new technology is so overwhelmingly important, we can’t risk [not embracing] it.

People have made a fundamental error in equating massive job losses to a rise in automated technologies. Jobs were lost because of our country’s great economic recession. The fact that people are solely blaming technology on losing their jobs is amazing to me.

Aside from job loss, the fear of automation being something dangerous, self-run, and entirely out of human control is a large piece of the public conversation around new technologies. Are these valid concerns?

Atkinson: Of course there are dangers, there always will be. Sure, autonomous vehicle accidents may kill a few people each year. But it will be insignificant compared to the hundreds killed in human-driven car crashes each year. You have to put it in perspective. To me, the biggest threat is cybersecurity. That’s going to be an area where small errors can create serious damage.

Wallach: I want to precipitate attention, not fear. We can’t say for certain what these future technologies will be able to do, but we can create a strategy to approach their individual assessment. People need to understand that there are explicit things that can go wrong, but also broader economic and cultural impacts that could seriously alter society.

Both Wallach and Atkinson agree that an independent, organized body should be responsible for overseeing the new influx of technology in the national market.

Wallach: We need some kind of Governance Coordination Committee that could provide a forum for stakeholders to deliberate on governance issues and to produce recommendations, reports and roadmaps. From that, we can make more structured and thought-out decisions when it comes to introducing new technologies.

Atkinson: I think the government should put funding back into the Office of Technology Assessment to provide knowledgeable oversight and research on new technologies. We need an unbiased institution like that to bring balance back to this fear-driven argument.

Yale Professor and author of A Dangerous Master: How to Keep Technology from Slipping Beyond Our Control.

Shaheena Janjuha-Jivraj Associate Professor in Entrepreneurial Leadership and Diversity at HEC Paris Naeema Pasha Director of Future of Work, Equity and Careers at Henley Business School
URL: https://www.brinknews.com/should-we-fear-the-rise-of-the-robots/
Get ahead in a rapidly changing world. Sign up for our daily newsletter. Subscribe
​​