Steering a Path through Social and Political Unrest 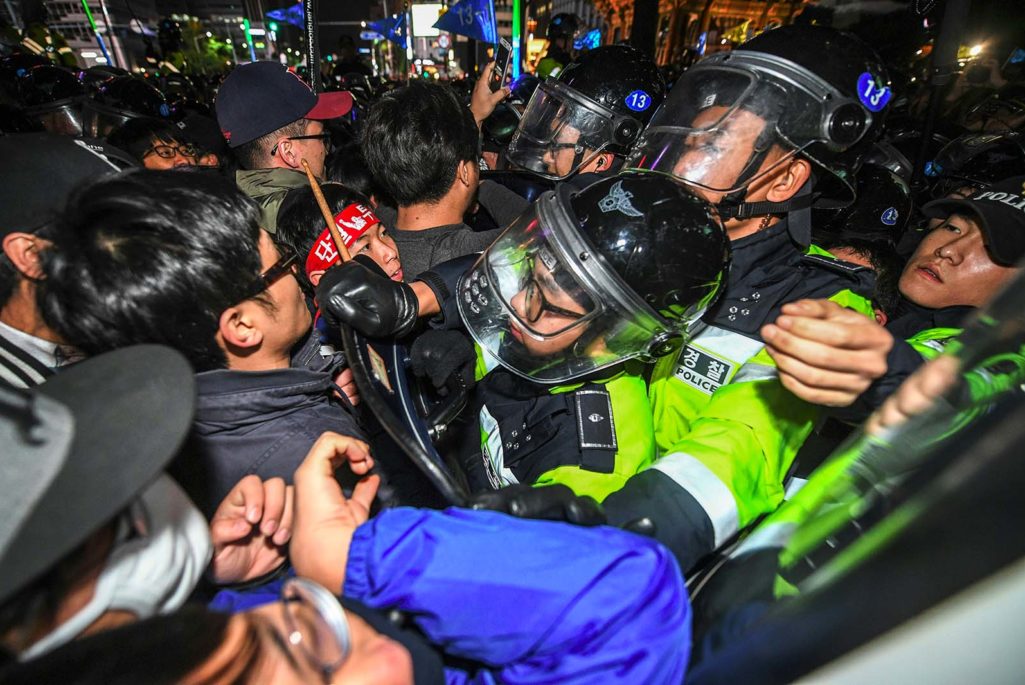 South Korean protesters scuffle with riot police as they try to march toward the presidential Blue House after a candle-lit rally in central Seoul on October 29, 2016, denouncing President Park Geun-Hye over a high-profile corruption and influence-peddling scandal involving her close friend.

In many countries, people have simply had enough, and their demands are beginning to reshape the political and economic landscape. With a new political logic in motion, firms need to reassess the volatility, surprises and structural shifts that may confront them, according to a new report from Marsh McLennan Companies’ Global Risk Center.

This year, citizens have taken to the streets in large numbers. Strikers have disrupted fuel supplies in France, the large influx of refugees to Germany has been a lightning rod for wide-ranging vexation and racial tension has intensified in the U.S. and elsewhere.

There have been riots in Venezuela over the state of the economy and chronic shortages, violence in Tunisia over high unemployment and outrage in Brazil over the mismanagement of the economy and corruption scandals engulfing the political elite. Protests have flared in Kazakhstan and Ethiopia over land reform proposals, with foreign company assets being destroyed by frustrated citizens in the latter.

At the ballot box, citizens have rejected the political establishment and the status quo—in the UK referendum on the European Union, the Austrian presidential election and the mayoral contest in Rome, among others. Voters in South Africa are turning against the African National Congress party, the Colombian people have rejected the government’s peace deal with the FARC guerillas and the disputed reelection of President Ali Bongo has sparked deadly riots in Gabon.

Moreover, a deepening political and religious radicalism has expanded the scope of terrorist attacks from the Middle East and North Africa to Europe, North America and beyond, with Paris, Brussels, Nice, Istanbul, Dhaka, Jakarta, Orlando, and New York numbering among incident locations.

Against this backdrop, the macro-level risk environment for companies has become more complex and volatile. The tight interplay among economic, political and societal challenges has stimulated a wide range of threats to business activity (see graphic). In light of recent turbulence, many firms have returned to hoarding cash, believing it more prudent to monitor the progress of others while attempting to decipher the impact of media-headline events; however, this will not inoculate them against shocks. To strengthen their positioning, companies should focus on three things: sharpening risk insights, insulating investment strategies and deepening stakeholder relationships.

Potential flash points are hard to predict, even when the characteristics of the risk environment are well known. It also can be hard to get a fix on seismic events, even after the fact. Months after the Brexit decision, there is little clarity about the platforms for negotiating the UK’s exit from the EU, let alone their achievability. Conversely, although order was swiftly restored following the attempted military coup in Turkey, the sweeping deployment of emergency powers has added to preexisting policy and political risk for domestic and foreign firms.

Key social and political risk trends should be viewed as enterprise-level issues, not local problems. Searching questions should be asked about exposures and opportunities across the entire value chain, with mitigation resources concentrated on addressing catastrophic risks that might have material impacts on earnings and share price.

New kinds of analysis may be necessary. Creative scenario-based techniques can help identify points of corporate vulnerability, along with the associated implications for performance and assets. From this starting point, “what-if” thinking can be used to test the resilience of mitigation and contingency measures, and also to war-game responses to potential crises emerging from incidents escalating in unexpected directions.

Companies with an extensive global footprint should triangulate insights from local operatives with synthesized media and analyst reports, even if smaller organizations may need to rely more heavily on third-party advisors. Decision-makers should solicit expert opinion to form a better view on its veracity and the scope for alternative outcomes. In certain circumstances, it can be valuable for firms operating in high-risk countries to share intelligence on the changing risk landscape, especially where this might inform contingency measures in the event of a crisis.

Government responses to the scale of societal discontent and civil disturbance are generating new uncertainties. “Done deals”—from labor reform programs to foreign investment in critical infrastructure—are unraveling. Market-leading firms can no longer rely on their distinct positioning to set their commercial agenda on purely economic terms. Political acceptability has become more important in assessing the feasibility of a major investment or strategy change.

It is important to take a fresh look at how a company’s strategic ambitions match with political agenda and public perception. As the overseas ambitions of large companies become increasingly viewed through the lens of geoeconomic priorities, company leaders may need to work harder to ensure their investment narrative does not face undue political setbacks at national and local levels, both at home and abroad.

Firms should pursue opportunities to derisk new strategic investments. Backloading investment, where possible, affords firms the freedom to withdraw in the medium term if, economically and politically, the new market does not develop as expected. In addition, creative use of risk transfer mechanisms can better align protection with needs.

Firms should expect higher levels of political and public scrutiny. Monitoring will be particularly intense for possible participation in corruption and tax avoidance. Demands for financial transparency will intensify, and data on questionable practices is increasingly likely to make its way into the open, often via illicit channels.

As a corollary, companies may more easily find themselves on the wrong side of volatile social, political and environmental issues. Social media-driven boycotts, campaigns and disputes may undermine revenues, project timetables and the feasibility of local operations. Strikes and other popular demonstrations may impede business activity, while the threat of a terrorist attack lurks in the background. Moreover, an increased willingness of employees to take a stand against their firm may be echoed in a more general disengagement of personnel, giving rise to operational errors and lapses in judgment.

Companies should strengthen efforts to build relationships and reputation. In the first instance, this means being better attuned to the political conversation in key markets and cultivating a wider range of stakeholders at national and local level. In addition, preemptive reputation management is vital for shielding the firm from possible targeted campaigns and instinctive backlashes that can spiral out of control in today’s world of “always-on” media. Companies that show they can be part of the solution to the causes of unrest may encounter significant opportunities.

It may be opportune to examine corporate positioning from an internal perspective. Refreshing the company’s values can help them resonate more strongly with employees and strengthen the social contract of the employer at a time of potential personnel disengagement. This effort can be consolidated by building behavioral expectations into performance goals and review processes.

In addition, aligning corporate social responsibility programs more squarely with drivers of financial performance or threats to long-term value might stimulate greater investment in issues such as workforce retraining, as this may mitigate the instability generated by structural shifts in future labor requirements.

Those of a sanguine disposition may assume that the old order will inevitably prevail. Gloomier types view the same evidence base as signaling more cataclysmic confrontations to come. A third perspective takes more of a middle-road approach, anticipating significant policy adjustments by familiar and unfamiliar politicians alike, as countries face up to deep-seated challenges and attempt to navigate difficult transitions.

Uncertainty is the enemy of investment, and it is arguable that the number of plausible scenarios for the future has increased. In unsettling times, cool heads must balance the demands of fast news cycles with more profound developments in the risk landscape. In this way, company leaders can not only strengthen the resilience of their firms, but also generate long-term shareholder value.

Andrew Yeo Senior Fellow and SK-Korea Foundation Chair in Korea Studies at Brookings Institution’s Center for East Asia Policy Studies
URL: https://www.brinknews.com/steering-a-path-through-social-and-political-unrest/
Get ahead in a rapidly changing world. Sign up for our daily newsletter. Subscribe
​​