What Lies Ahead for Brexit? 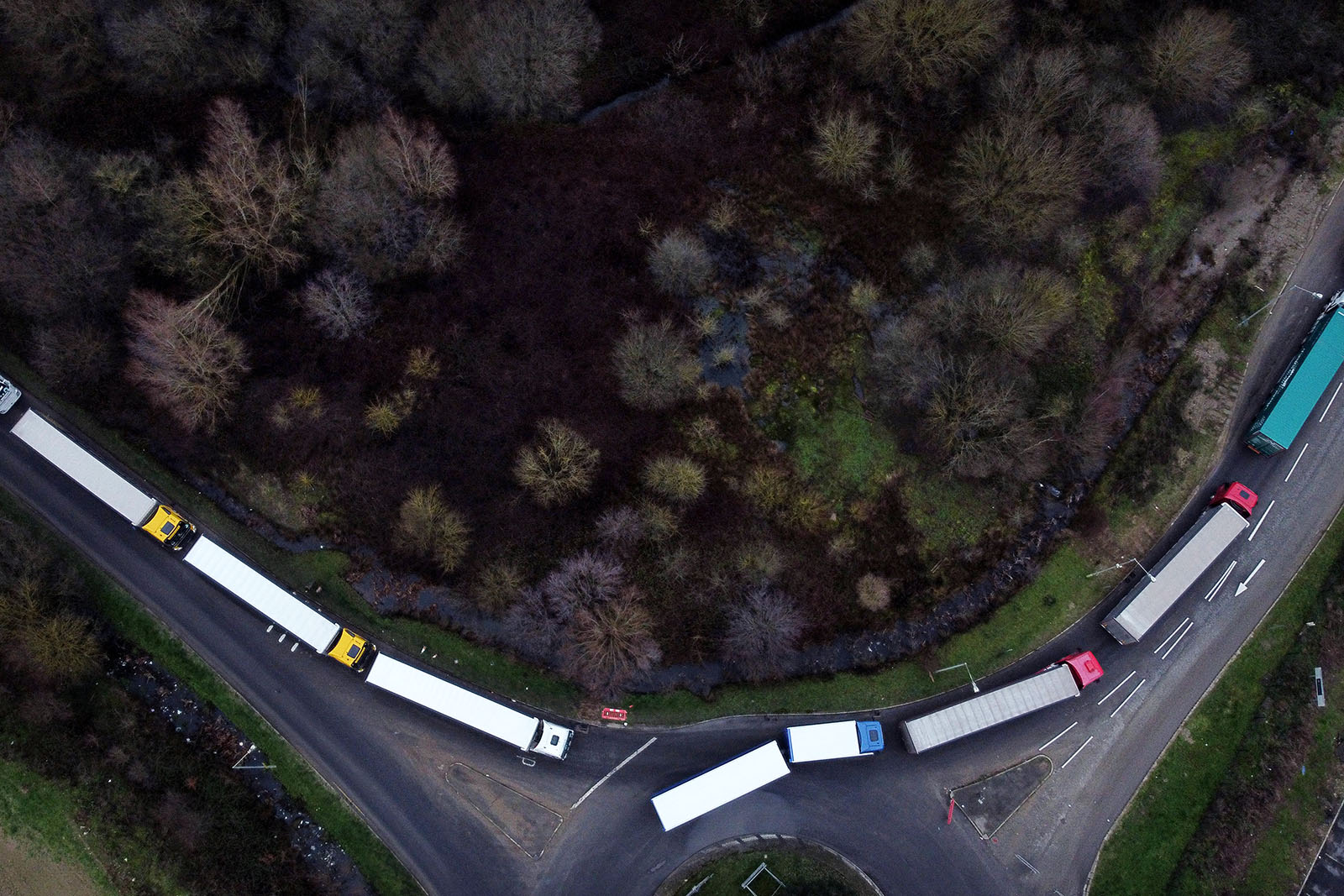 An overhead view shows freight trucks queuing to enter Waterbrook Park facility in Ashford, southeast England, on January 15, 2021, as haulers get used under the post-Brexit trade deal. The U.K. is phasing in its border controls over the next six months.

Now that a trade agreement has been reached between the EU and the U.K., what happens next? UK in a Changing Europe recently published a major analysis of the draft Brexit deal, known as the Trade & Cooperation Agreement (TCA), and its implications on the U.K.’s economy and society.

Jill Rutter, a senior research fellow of UK in a Changing Europe, has followed Brexit closely for the last four years. BRINK asked her to provide some guidance for the immediate future.

RUTTER: What is very noticeable in the TCA is that they didn’t negotiate any sort of implementation phase-in period. Quite a lot of businesses were saying if a deal was done this late in the day, they needed that. But it didn’t happen.

The U.K. is phasing in its border controls over the next six months so the U.K. border doesn’t, if you like, go into full implementation until the 1st of July. The EU seems to have been going a bit lightly in the first couple of weeks, but stories going around now suggest that they are going to implement proper controls. Quite a lot of people have already been shocked to find that they’ve ordered something over the internet and then received a demand to pay duty that they never would have had inside the single market.

The position’s a bit different in Northern Ireland where the U.K. is obviously operating part of the EU’s border — the border in the Irish Sea that government ministers still say doesn’t exist. There are some grace periods that were agreed very late in the day in the joint committee, which expire particularly on the necessary certification accompanying agri-foods and things like that. Lots of concerns about what might happen if those expire without some long-term easements in place.

So it’s quite a complicated position, and we’re not fully there yet.

No Deal on Short-Term Business Visits

BRINK: Because of COVID, do you think that we won’t see the full impact for consumers and employers immediately?

RUTTER: The interesting thing is that there have been very low traffic flows over the Channel crossing into France since the agreement. In part, that may have been because there was a lot of stockpiling that went on before the beginning of the year. We then had this rather traumatic effect in the immediate week before Christmas with the French shutting their border to people coming back from the U.K. because of the new variant of COVID. I do think people are anticipating more disruption in the weeks to come once those stockpiles have run down and trade reverts to normal.

The other bit where COVID hits is in the movement of people to the continent. There are obviously people moving to the continent for personal travel, where you have to go through a different queue at passport control and things like that. That’s probably livable.

But because of COVID, businesses haven’t yet felt the full impact of the new limitations on being able to service EU clients — where they might need someone to go and service a piece of machinery, or work on a project. That’s an area where, because there’s no agreement on short-term business visits, or on recognition of qualifications, there’s potentially quite a lot of disruption to come. But because nobody’s really doing that sort of business travel at the moment, it isn’t being felt.

Big Drop Off in Trade Predicted

BRINK: Now that we have a deal, what’s your sense of the long-term economic impact? Which parts of the economy do you think will be impacted the greatest?

RUTTER: The UK In A Changing Europe’s new report looks at the impacts of this deal on exports and imports. It finds that it has very big effects on both sides of that equation. Both exports and imports are forecast to go down by around a third, slightly more for exports than imports. And that then feeds through into GDP.

It’s likely to have a 3% or 4% long-term effect in suppressing GDP, compared to the counterfactual of continued EU membership. If you take into account the fact that trade tends to make the economy more dynamic, boost productivity, boost skills and investment, then that looks more like a 6% to 8% drop.

The best thing you could do for GDP in the U.K. is not really related to Brexit at all, but is to use Brexit as a catalyst to tackle some of the well-known, longstanding structural weaknesses of the U.K. economy.

BRINK: Do you foresee a lot of disputes with the EU over the issue of a level playing field?

RUTTER: I think that’s the 600 billion pound question, because we don’t really know that yet. We don’t know how readily the EU will use the provisions that are in the TCA either to raise specific disputes, take retaliatory action or to resort to what’s called the rebalancing mechanism, if they think that U.K. actions on a sub-level playing field areas have tilted the balance of competition too much in the U.K.’s favor.

Will There Be Rivalry With the EU?

It’s possible that the EU could say, “Well, we put the U.K. pretty firmly outside the single market. Its businesses now face a whole barrage of new red tape to do business in the EU, and therefore, anything they can do on the regulatory front is frankly going to have a pretty marginal effect compared to those changes.”

Or it might say, “We need to watch the U.K. like a hawk, and we need to send some very early warning shots across their bows to make sure they realize that they have very limited room for maneuver.”

The prime minister has said that in five and a half years, we can take back control entirely of our fishing waters. Technically, he’s right. But it’s absolutely clear that if we do that, the U.K. will no longer enjoy anything like the trade and cooperation agreement. There are lots of provisions to allow the EU to take rebalancing action on the trade agreement, on the transport, energy provisions and other aspects.

The question is how limited is the divergence going to be, and whether over time the U.K. thinks, is it really worth having the right to diverge on something like sanitary standards? Or will the U.K. say, “Yes, we’re prepared to submit our regulations to EU inspections, so that we can avoid a lot of these really onerous checks at the border”?

How alive is the U.K. government to business’s concerns? Does it just basically say to business, “You’ve just got to adapt. This is the new reality. If you can’t adapt, then, sorry.” I think that’s a really interesting question.

Ministers will be very keen to point out that they are now able to do things differently to the EU, and that it is bringing all sorts of concrete benefits, because they need to show to the people that Brexit is not just about getting our sovereignty back and nominal control, but can actually yield benefits.

If you talk to the Swiss, they will tell you that they actually have constant friction with the EU over their multiple agreements. So does the EU regard this as making the U.K. into a Switzerland, where you’re always watching and intervening, and Switzerland, of course, has much better access to the single market than the U.K. does. Or is the EU going to treat the U.K. as geographically a bit closer but fundamentally more like Canada?

BRINK: What’s your take on the wider opportunities outside the EU that have often been touted by the government? Do you think they can make up the ground lost from the EU?

RUTTER: New trade deals don’t do that much for your GDP because obviously they have to offer benefits to the other trade partner as well, in terms of better market access. They offer consumer benefits, but may not necessarily increase your GDP much. So you’ll be hard pressed to offset those benefits through other trade deals.

The best thing you could do for GDP in the U.K. is not really related to Brexit at all, but is to use Brexit as a catalyst to tackle some of the well-known, longstanding structural weaknesses of the U.K. economy such as low productivity and inequality and to use it as a catalyst to invest in skills and infrastructure.

Will Brexit galvanize us into thinking differently about the U.K. economy and actually tackling those problems? No one knows.

Chris Miller Associate Professor at the Fletcher School at Tufts University
URL: https://www.brinknews.com/what-lies-ahead-for-brexit/
Get ahead in a rapidly changing world. Sign up for our daily newsletter. Subscribe
​​