Why Defeating ISIS with Military Might is Starry-Eyed Idealism 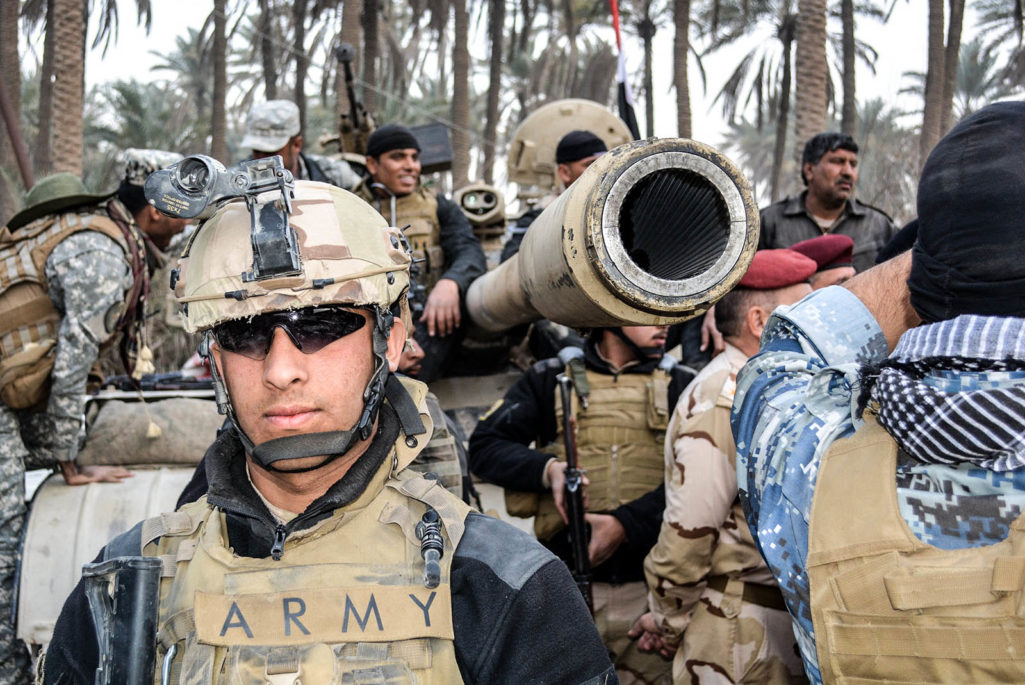 Iraqi government forces rest after they claimed they have gained complete control of the Diyala province, northeast of Baghdad, on January 26, 2015 near the town of Muqdadiyah. Iraqi forces have 'liberated' Diyala province from the Islamic State jihadist group, retaking all populated areas of the eastern region, a top army officer said.

ISIS–the self-proclaimed “Islamic State”–is the monster of our times, our Grendel. A steady stream of political statements offering answers to “what do we do about them?” have gotten progressively more hawkish.

Would-be presidents have given us options ranging from bombing ISIS “back to the seventh century” (Rick Santorum), increasing the number of American troops in the fight (Lindsey Graham), and “look for them, find them and kill them” (Marco Rubio, quoting an action movie).

Bold words—and every one of them will fail, because they are far too idealistic to work in reality. A realistic assessment advocates something else: peacebuilding.

“War as utopian idealism” and “peacebuilding as hard-nosed realism” sounds like an absurd joke.

Here’s why it isn’t.

War is Just Politics by Other Means

Carl Von Clausewitz, one of history’s foremost military strategists, famously called warfare an “extension of politics by other means.”

What he meant is that unless military action grows out of and complements a solid, sustainable political strategy, it will fail.

That was true in his day of formalized warfare; in today’s world, it’s even more critical an insight. This conflict and others like it around the world are rooted in people, not states—in ideology and religion, sectarian frictions, political exclusion and social marginalization, resources and access.

None of these respond to force or can be bombed out of existence.

In other words, if “defeat ISIS” isn’t couched within a clear, realistic plan to do the human, political, diplomatic and development work necessary to fix the problems that gave it rise, the mission will fail.

In its failure, it will leave behind the seeds of a new threat in fertile soil, just as ISIS itself grew from the roots of al-Qaida.

Peacebuilding means doing the hard work of analyzing the causes and conditions that lead to violence and instability.

Peacebuilding means doing the hard work of analyzing the causes and conditions that lead to violence and instability, identifying ways of breaking those causes down, and then doing the even harder work of helping to build healthy, resilient social and political structures.

It’s work that’s usually dismissed as an exercise in utopian idealism by a policy community dominated by the philosophy of nation states and Realpolitik. And yet over the last few years, the fallacy of that dismissal has become increasingly clear.

General James Mattis told Congress that “if you don’t fully fund the State Department, then I need to buy more ammunition.” General Warren Phipps, former commander of the 101st Airborne Division in Afghanistan, when asked about peacebuilding outreach to men he’d fought not long before, replied: “That’s how wars end… we can’t kill our way out of this.” The RAND Corporation, as far back as 2008, advised that outside military intervention is bar none the least effective way to make terrorist groups go away.

In fact the battlefield options—however satisfying they may seem in a tactical sense—often cause more trouble than they’re worth. The Saudis are discovering this in their campaign against the Houthis in Yemen, which is entirely military and has no parallel political component, and is having predictably destabilizing consequences.

Yes, building peace is a long process that will take years, perhaps generations; but those years will pass whether or not we recognize the need for a more realistic foreign policy, and the only question is whether in years to come progress has been made, or the war goes on.

The discussion about ISIS, as with many others around the globe, has lost track of realism. Instead of looking at the military as an extension of politics, speakers across the board have begun to look at politics as secondary—something to worry about once the hard work of fighting’s done.

What does this look like in practice? Here are four possible actions:

One—The “real battle” here isn’t with ISIS, it’s for the populations they’re trying to sway. ISIS may prove impossible to talk with, but if we’re indiscriminate and also the majority looking to the outside world for engagement and help, we’re doing nothing but feeding into the vicious cycle.

Two—Make it clear to the populations concerned that we strive to address the problems they face, not just those symptoms of the problems that we face.

Speaking to the current fight, but not the problems that gave rise to it and which will still exist once the smoke clears, comes across as naive and disingenuous. Make a clear statement, for example, that we will not support repressive regimes in exchange for expedient stability, but are prepared for the long haul of achieving stability through unfailing support for the ideals of inclusive good governance that we ourselves hold dear.

Three—The real key to peace-building (as with development overall) isn’t “what you do,” it’s “how you do it.”

The most effective “how” is to look past states to see people, and provide incentives to get the population and government alike involved in designing and negotiating their own inclusive way forward—with our support, not with our direction. This is a more terrifying thought for ISIS than any weaponry.

Four—Most of all, recognize that the military neither can, nor should be, the primary vehicle for American engagement overseas, and reprioritize funding accordingly.

The message we send by prioritizing our own national security agenda while underfunding the agencies whose core mission and skillset is to work with good governance, justice, peace and livelihoods, is that we have no intention of doing more than eradicating symptoms while leaving the causes unchecked.

At some point an American president will be forced to recognize that fixing problems like the ones in Iraq and Syria is too complicated to sum up in a campaign slogan or sound bite. That’s the hard truth.

The only question is how much in blood, time and treasure will be wasted before this realization hits home.

Getting rid of ISIS and groups like it certainly requires seriousness and a willingness to get hard work done—but that doesn’t just mean preparing to get bloody. It means we need to be realistic and unafraid to say: “Our strategy is to build peace.”

A more in-depth version of this piece first appeared in The Conversation.

David Alpher, PhD, is an adjunct professor at George Mason University’s School for Conflict Analysis and Resolution. He has spent the past fourteen years applying conflict resolution theory and methodology to practical international development work in fragile and unstable areas. He has twice led field programs in Anbar Province, Iraq. In addition he has worked with track two dialogues between conflicting parties in Israel/Palestine, conducted conflict and development assessments in Nepal and Ethiopia, and helped facilitate inter-religious dialogues in the U.S.

Andrew Yeo Senior Fellow and SK-Korea Foundation Chair in Korea Studies at Brookings Institution’s Center for East Asia Policy Studies
URL: https://www.brinknews.com/why-defeating-isis-with-military-might-is-starry-eyed-idealism/
Get ahead in a rapidly changing world. Sign up for our daily newsletter. Subscribe
​​