Algae Is the Plant-Based, Nontoxic Alternative to Plastic 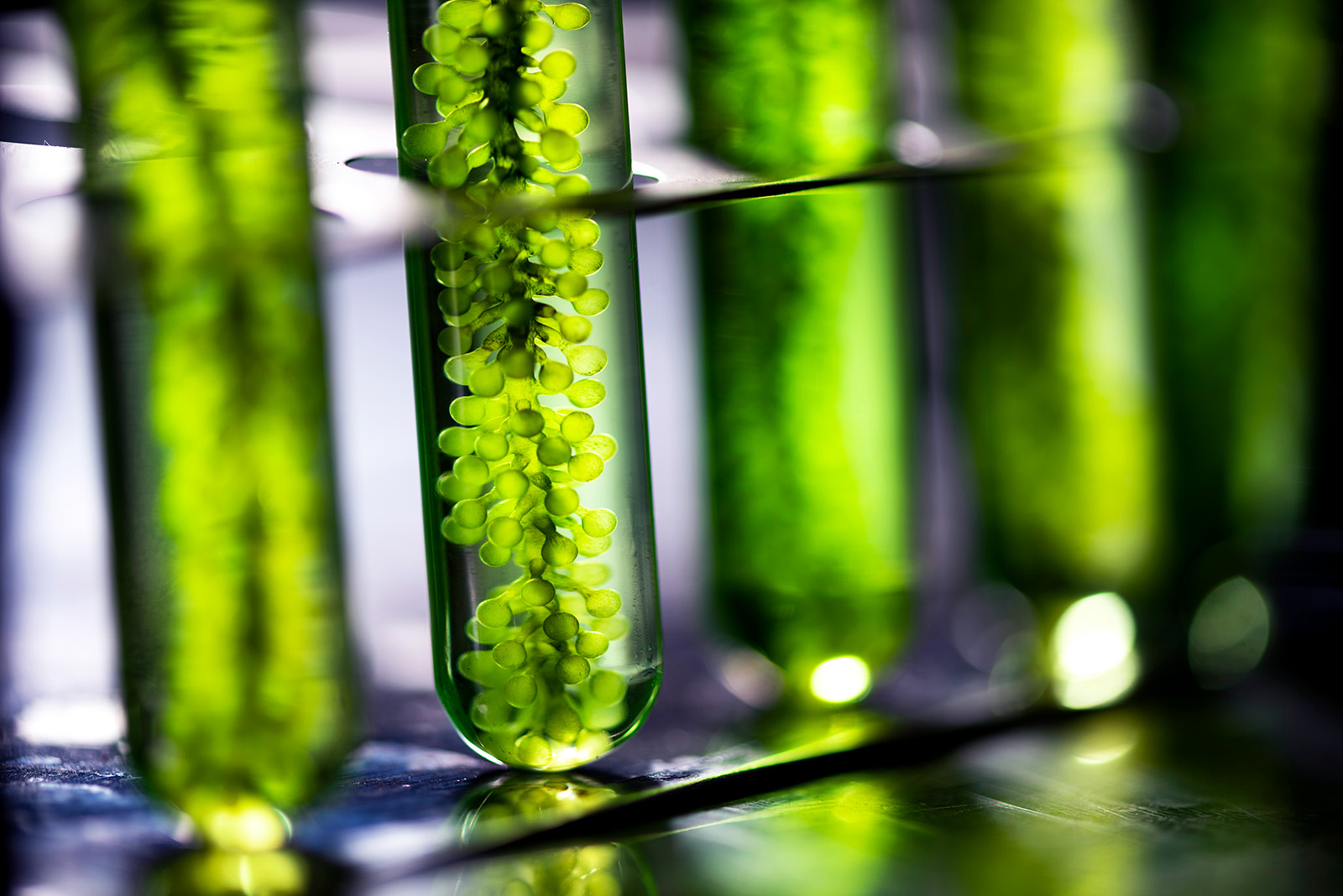 An image of a lab containing algae biofuel. Algae can be used as a replacement for single-use plastic.

Biobased materials, particularly in the thorny realm of bioplastics, are a polarizing subject. But for as many systemic kinks that their management lays bare, the slew of potential long-term benefits to swapping out petroleum-based products for plant-based alternatives is hard to ignore.

While sugar cane and corn are popular feedstocks, their frequent reliance on synthetic fertilizers, use of arable land for non-food crops and propensity for monoculture don’t always make biobased materials the most environment-friendly option. Accordingly, a growing number of materials scientists and manufacturers are turning from land to sea in search of more sustainable biomass feedstocks.

Consider algae, an umbrella term for a group of seaweeds, kelps and other photosynthetic eukaryotes. They have high yields and short cultivation times, plus the potential to sequester carbon dioxide in the process. While algae have received attention for their potential to displace fossil fuels as an energy source, their applications in packaging and other products are beginning to gain momentum.

Algae As a Replacement for Single-Use Plastic

One example is Loliware, the seaweed-based straw company that received some attention amid the 2018 wave of activism against single-use plastic straws. It produced a hyper-compostable straw that is not only degradable on both land and water but also, theoretically, even edible. Loliware is also working to manufacture seaweed-based flexible films, pulps and other alternatives to single-use plastics.

“If we look at the average life cycle of algae, it can grow up to nine or 12 feet per day, all while sequestering carbon,” Loliware co-founder and CEO Chelsea Briganti recently told me. “We source anywhere from five to eight different species [of algae], and we custom blend to create our products, which gives us that wonderful balance between structural integrity and flexibility. It allows us to really mimic plastic at a very high degree.”

Other algae-based packaging innovations looking to make a dent in the single-use plastic market include Ooho, the edible and biodegradable water sachet featured at last year’s London Marathon, and Indonesian startup Evoware, which makes seaweed-based cups, wraps and bags. But packaging is the tip of the iceberg when it comes to algae’s potential opportunities and applications.

‘Algae represents the fastest-growing organisms powered by sunlight. When algae is used to clean the environment, the result is a biomass that we can convert into a bioplastic material’

Algix is another startup worth noting. As you may remember from an environmental science class, the runoff from agriculture and other industrial sites is often nutrient-rich, containing high levels of phosphorus and nitrogen. Downstream in estuaries, lakes and other aquatic environments, these misplaced nutrients can create harmful algae blooms that can suck the oxygen from their ecosystems and release toxins, killing off surrounding animal life and contaminating watersheds in the process. That’s where Mississippi-based materials company Algix comes in.

“Algae represents the fastest-growing organisms powered by sunlight,” Ryan Hunt, co-founder and chief technology officer at Algix, told me via email. “[We are] transforming air and water pollution (ammonia, phosphates and carbon dioxide) into plant biomass rich in proteins. When algae is used to clean the environment, the result is a biomass that we can convert into a bioplastic material.”

Specifically, Algix creates an algae-blended ethylene-vinyl acetate material it calls Bloom, a bouncy and flexible foam used in the soles of most shoes. It replaces the incumbent material traditionally made from petroleum. Algix works with an impressive list of brands including Native Shoes, Toms, Adidas and Merrell to provide a more sustainable alternative.

To source and manufacture these materials, Algix works with a network of partners including the Army Corps of Engineers to identify and remediate existing algae blooms polluting lakes and watersheds. Algix also partners with municipalities and companies to intercept these industrial or agricultural byproducts at their source to harvest from controlled algae blooms, rather than doing so from a natural ecosystem.

“As large brands incorporate Bloom resins into their products, they are creating a demand for algae-based water treatment and environmental remediation from harmful algae blooms,” Hunt said. Cultivating a market for waste while regenerating natural systems is a win-win for circularity.

Algae As Ink and Textile Fibers

The breadth of algae’s commercial applications is both awe-inspiring and delightful. Take Colorado-based Living Ink: The company is producing a carbon-negative carbon black ink, sourcing its biomass from a byproduct of spirulina, an organism that grows in both fresh and saltwater. New York-based biomaterials company AlgiKnit is producing fibers from seaweed to curb the toxicity of textile production. And if those aren’t delightful enough, the acronym for the consortium for marine algal industrialization is, of course, MAGIC.

Sounds about right to me.

A version of this piece originally appeared in GreenBiz.

Lauren Phipps is a circular economy analyst for GreenBiz Group and chair of VERGE Circular.

Mark Campanale Founder and Executive Chair of The Carbon Tracker Initiative
URL: https://www.brinknews.com/algae-is-the-plant-based-nontoxic-alternative-to-plastic-sustainability-environment-climate/
Get ahead in a rapidly changing world. Sign up for our daily newsletter. Subscribe
​​