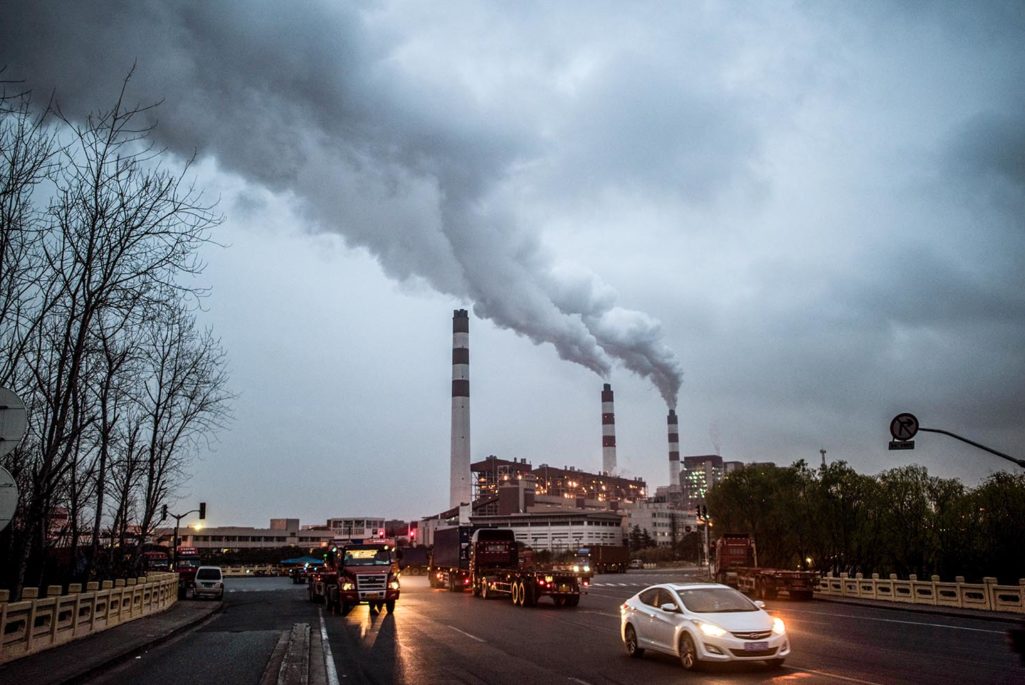 Cars pass the Shanghai Waigaoqiao Power Generator Company coal power plant in Shanghai on March 22, 2016. Environmental watchdog Greenpeace warned on March 22 the world’s coal plants are deepening the global water crisis as the water consumed by them could meet the basic needs of one billion people.

China, Japan and South Korea, which collectively account for more than 25 percent of global greenhouse gas (GHG) emissions, have the opportunity to take a leadership role in the global climate change arena by pursuing a collaborative mitigation strategy that links their various carbon markets.

Such a move would enhance the economic and environmental viability of their various carbon markets in nuanced ways, feeding into international processes while avoiding being constrained by them. It would chart a regional path that speaks to unique Northeast Asian circumstances, while contributing to international climate change responses.

All three countries have pledged to curtail GHG emissions and are using carbon markets as tools for doing so. These markets incentivize polluters to emit only what they are allowed and compel them to buy “allowances” for emitting beyond their limit. Allowances then become tradeable units that polluters who fall below their limits sell to those who exceed them. Where effective, carbon markets provide flexible options for lowering emissions at reduced costs. China, Japan and Korea would do well to develop their markets in concert.

The lauded Paris Agreement of December 2015 does not attempt to create a global carbon price or an international market, but rather supports and offers guidance to markets being crafted, managed and linked around the world. This global context bolsters the prospects of linking carbon markets in Northeast Asia, where China, Japan and Korea could emerge as global leaders in carbon market cooperation and connectivity. Given the scale of their economies and emissions profiles, successfully linking these markets would have wide-ranging impacts.

Environmentally, linking carbon markets can minimize leakage of emitting activity from one jurisdiction to another.

Why Link and Why Now?

Economically, linking can reduce emissions-reduction costs by expanding the number of unit buyers and sellers in ways that increase market liquidity and efficiency. This growth in market scale can reduce carbon price volatility by lessening the influence of powerful individual players and assuage competitiveness concerns by creating a more coherent regulatory environment across the region.

Environmentally, linking carbon markets can minimize the leakage of emitting activities from one jurisdiction to another. Emissions leaks occur when strict emissions regulations in one place cause polluters to shift their activities to areas with less stringent policies. Linking carbon markets would bring environmental co-benefits, just as lowering GHG emissions also reduces multiple conventional pollutants that impact Northeast Asia in interconnected ways. By making emissions reductions more efficient and affordable, linked markets would also encourage these countries to set more ambitious reduction targets in the future.

China, Japan and Korea are each undergoing a formative period in their respective market development. The period between 2015 and 2020 is set to usher in the next generation of regional carbon market mechanisms.

China has launched pilot markets in five major cities and two key provinces, creating the second largest carbon market coverage in the world behind the EU. Japan has decades of experience with carbon market experimentation and currently has linked markets in Tokyo and Saitama Prefecture, international links through its Joint Crediting Mechanism, and has recently renewed support for market mechanisms at the UN Climate Change Conference in Paris and the 2016 global Carbon Expo in Cologne. Korea has moved from rapid emissions growth during the 1990s and 2000s to some of the most progressive climate change policies in the world, with a 2010 green growth plan guiding the first national carbon market operating in the region.

Evidence shows that it is because these countries are in formative phases, and not in spite of it, that now is an ideal time to set the foundation for regional carbon market links. The Norwegian market was conceived in the early 2000s, launched in 2005, and linked with the EU in 2008. Linkage was considered and worked toward from its early days of formulation, not just after its 2005 launch. Likewise, California and Quebec adopted many of the same market design principles and held frequent technical discussions during the years of their development to ensure a degree of harmonization across targeted rules and designs—this allowed them to link the markets just one year after launching operations.

The EU and Switzerland, meanwhile, have faced steeper linkage challenges, and as such, harmonization was not fully considered during the design phase of the Swiss market.

As with these other cases, carbon market linkage in Northeast Asia will take time and require deliberate incremental steps. A worthy first step is to create ‘linkage-ready’ domestic markets in the region. China, Japan and Korea will not come to share all carbon market design characteristics, or have a completely unified emissions cap or carbon price. Nor should they; these countries have highly varied economic, energy and political profiles and must continue to develop climate change policies, irrespective of their national circumstances. Rather, the three countries can create flexible markets that align on key elements of monitoring, reporting and verification (MRV), avoid designs that lock out future linkage possibilities, and share the aspiration of being linkage-ready in the future.

Developing these targeted commonalities requires the Northeast Asian powers to regularly cooperate through multi-stakeholder meetings and informational exchanges—both formal and informal—and at senior policy and technical levels. These exchanges are vital for co-creating regional partnerships that are acceptable across sectors and jurisdictions. Through dialogue and negotiations, China, Japan and Korea can begin creating coordinated, initially voluntary, networked governance structures that support cross-border emissions trading.

Such efforts need not be confined to the national level, and piloting sub-national market linkages can build the technical and political foundation from which future market linkages extend. Trial linkages among Beijing, Tokyo and Seoul would provide national governments with city-level laboratories for exploring linkages across borders and—given the scope of emitting activities within these jurisdictions—have significant environmental and economic impacts.

No matter what level of carbon market linkage is pursued in Northeast Asia, regional stakeholders can benefit from international agreements and institutions that provide commonly defined principles, terms and rules of operation. Northeast Asian markets will remain unique, but some deployment of international mechanisms and capacity-building resources will have a harmonizing effect across the region and will help build the foundation for carbon market linkage.

Given the extent of geopolitical trials in Northeast Asia and with diplomatic relationships and international institutions struggling to manage competing interests, convergence around climate change policy can provide countries with positive short-term outcomes. Linking regional markets would be the most prominent and impactful such convergence to date.

Carbon market linkage in Northeast Asia has great potential, and China, Japan and Korea are well-placed to lead the international community into a new era of cooperative climate response efforts. Linkage considerations are also complex, multilayered, and have implications across sectors and jurisdictions. It will take consistent and action-oriented institutional and person-to-person connections to make regional market linkages a reality. The time for building these connections is now.

This article draws from the author’s recent report, Roadmap to a Northeast Asian Carbon Market. The author and his colleagues at the Asia Society Policy Institute are currently working with regional and international experts and policymakers to drive carbon market linkages in Northeast Asia.

Director of Asian Sustainability at the Asia Society Policy Institute

Jackson Ewing is the Director of Asian Sustainability at the Asia Society Policy Institute in New York, where he leads projects on environmental cooperation, responsible resource development, and international climate change policy. He has worked throughout Asia with actors in government, the private sector, civil society and international organizations.

Mark Campanale Founder and Executive Chair of The Carbon Tracker Initiative
URL: https://www.brinknews.com/beating-climate-change-through-innovative-carbon-markets-in-northeast-asia/
Get ahead in a rapidly changing world. Sign up for our daily newsletter. Subscribe
​​