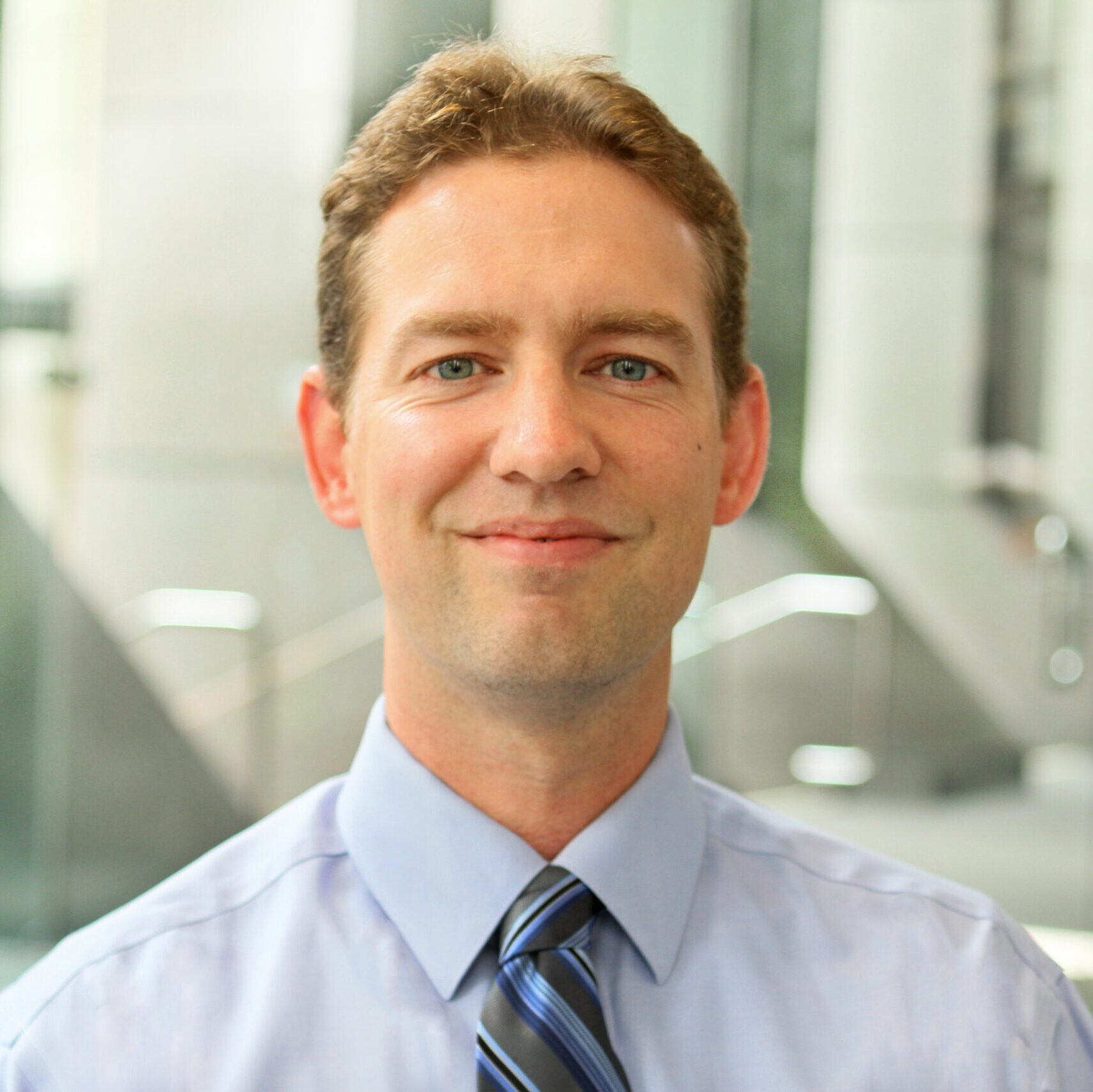 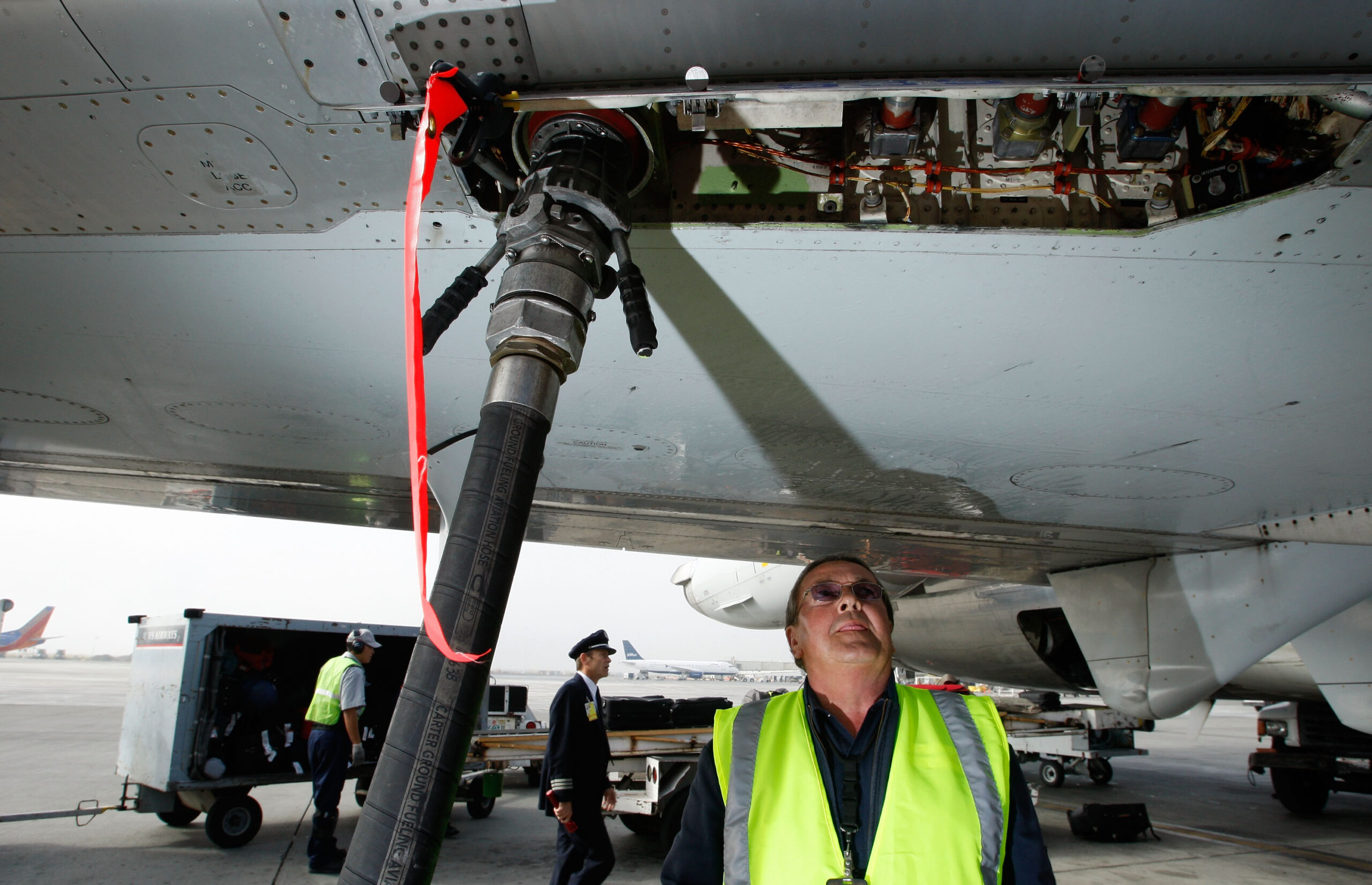 Swissport fueler Miroslaw Szymczak monitors a fueling hose while refueling an American Airlines plane November 2, 2007 at the Oakland International Airport. New technologies like sustainable aviation fuel have the potential to reduce fossil jet fuel to near zero levels in 2050.

Governments have committed to get their aviation sectors to net zero carbon emissions by 2050. This is a huge challenge for the sector, but there are some hopeful signs of technological breakthroughs.

The International Council on Clean Transportation recently studied the options and concluded that keeping to a 1.75-degree increase would be possible, mainly through the widespread introduction of sustainable aviation fuels. Dan Rutherford of the ICCT was one of the authors of the report.

RUTHERFORD: We looked at a baseline scenario and three scenarios of increasing ambition. All of these include a large introduction of alternative fuels, more aggressive fuel efficiency improvements, and then also the economic incentives, like carbon pricing, that would be needed to drive the technology transformation.

Overall, we were pleasantly surprised with the results of the most aggressive scenario. We found that new technologies that are under development today have the potential to peak fossil jet fuel use in 2025 and reduce it to near zero levels in 2050.

And just to put that into perspective, that would cut emissions in 2050 by more than 90% compared to pre-COVID levels and bring airlines in line with a 1.75-degree Celsius temperature pathway under the Paris agreement.

BRINK: One of the main parts of this pathway are what you call sustainable aviation fuels. Could you explain what they are and how advanced the technology is?

RUTHERFORD: About 2/3 of the estimated reductions through 2050 come from alternative fuels. And the remaining 1/3 come from either efficiency improvements or some limited reductions in demand as ticket prices increase.

Within the alternative fuels buckets, there’s actually two key technologies. One is sustainable aviation fuels, and the other is zero emission planes. Sustainable aviation fuels are a replacement to today’s fossil jet fuels. They are synthesized either from excess renewable electricity or from biological feedstocks. And the advantage of SAFs is they’re essentially chemically identical to Jet A-1 aviation fuel that’s used in jet aircraft today. And therefore, they can be used in today’s planes and today’s engines without much modification.

The other half, or actually it’s more like a 10th of the equation, is zero emission planes. And these would be planes that are fueled either by hydrogen or electricity. Those are more midterm technologies and not applicable as drop-in fuels. And therefore, we see a relatively smaller role of zero emission planes in the 2050 context. If it can be adapted to aviation, hydrogen could be a cheaper fuel than SAFs, so we may see larger adoption after 2050. But until then, hydrogen’s use will be constrained by how quickly fossil-fueled aircraft are replaced by new aircraft.

To go back to SAFs, there’s a lot of optimism and interest in sustainable aviation fuels today, but they currently make a very, very small part of the fuel mix. The last figure I’m aware of in 2020, SAFs accounted for about 1/20th of 1% of overall jet fuel use. So the equivalent of about four hours of operation in a given year.

BRINK: Do SAFs have the ability to scale in the near future?

RUTHERFORD: There are three main challenges to scaling SAFs in a way that’s consistent with environmental protection. There is just the overall supply, there is the cost, and then there is the sustainability certification. And those are all linked together.

It’s Going to Be a Challenge

Unfortunately, it’s possible to create a SAF, a sustainable aviation fuel, that is actually more carbon intensive than fossil jet fuel over its life cycle. For example, if you use palm oil to generate a SAF, that can trigger tropical deforestation and therefore excess emissions in upstream production.

We know that the costs are going to go up. We know that we need to avoid the bad feedstocks. We need to push toward real wastes and also synthetic fuels that can be produced by solar electricity or wind power. And we need to get the supply up in a way that doesn’t impose excess costs to airlines or promote dead-end fuels, for example, those made from food crops.

The good news is that the base of the technology is being explored really effectively right now. We’re starting to see policy, especially in Europe, that we think strikes a nice balance across the sustainability, cost, and supply. The vision is about a 5% supply in 2030 and a 63% supply in 2050.

The Oil Majors Not Yet on Board

BRINK: And what’s been the reception of the aviation sector so far to this? Are they embracing it enthusiastically?

RUTHERFORD: Definitely enthusiasm from sustainability officers and those who are involved in environmental planning because you can use SAFs in today’s planes. But most of the investment and most of the technology development would need to be done by the fuel providers. And there, I think, it’s very much a mixed record.

We are seeing clear leadership from Europe and the European Commission and European countries on clean fuels mandates, on carbon pricing, and maybe even on ending tax exemptions for fossil jet fuel.

We see a number of small startups that are looking at novel fuels and trying to build facilities. But by and large, the major fuel providers, like the oil majors that dominate jet fuel sales today, are taking a very cautious approach.

BRINK: Obviously there’s quite a considerable cost associated with this. What are your projections about how they might end up being passed on through into ticket price?

RUTHERFORD: If you look at the highest quality, the most sustainable SAFs, those will be like an e-kerosene generated from renewable electricity. By our estimates, those are about seven to 10 times more expensive than fossil jet fuel today. By 2050, that price premium could drop to about two times, depending on where the fuels are made.

Just to put that into perspective: That’s a reduction in growth over time. What we’re seeing is instead of maybe 150% increase in traffic in 2050 above 2019 levels, we actually see only 130% increase due to the price impacts of SAFs. That’s not going to break the aviation industry.

The trick is that in the interim, SAFs will be far too expensive for airlines for us to expect that airlines will purchase them on their own. We’re going to need really strong government incentives to bring SAFs down the cost curve. And that’s the key question for policymakers: How do we mobilize governments in an effective way to put us on that pathway?

BRINK: Having done all this research and looked at it, are you hopeful that this is feasible?

RUTHERFORD: I’m hopeful for it. I think there’s clearly consumer demand for it. On the other side, we see a lot of corporations are struggling with how you deal with what we call Scope 3 emissions. Those would be the emissions associated with business travel of their employees.

We clearly see a market. We are seeing clear leadership from Europe and the European Commission and European countries on clean fuels mandates, on carbon pricing, and maybe even on ending tax exemptions for fossil jet fuel. Those are the green shoots, I would say. The U.S. is clearly delayed right now in terms of both awareness of climate change and then concrete policy steps. And one thing that’s very much on the agenda is the rest of the world. Like how the U.N. arranges around these things.

We have a big meeting coming up in late September, early October, in Montreal. It’s the Triennial Assembly for the International Civil Aviation Organization, or ICAO, which is the de facto regulator for civil aviation worldwide. And this issue’s front and center. We’ll be debating what type of 2050 climate target is appropriate for airlines at that meeting. From there, expect more policy to flow.

Dr. Dan Rutherford directs the International Council on Clean Transportation’s aviation and marine programs. In that capacity, he helps national and international regulators develop policies to reduce air pollution and greenhouse gases from planes and ships. He is an internationally recognized expert on measures to promote the fuel efficiency of international transport, to control short-lived climate pollutants, and to phase out the use of fossil fuels.

Elsa Wenzel Senior Editor at GreenBiz.com
URL: https://www.brinknews.com/can-aviation-clean-up-its-climate-act/
Get ahead in a rapidly changing world. Sign up for our daily newsletter. Subscribe
​​