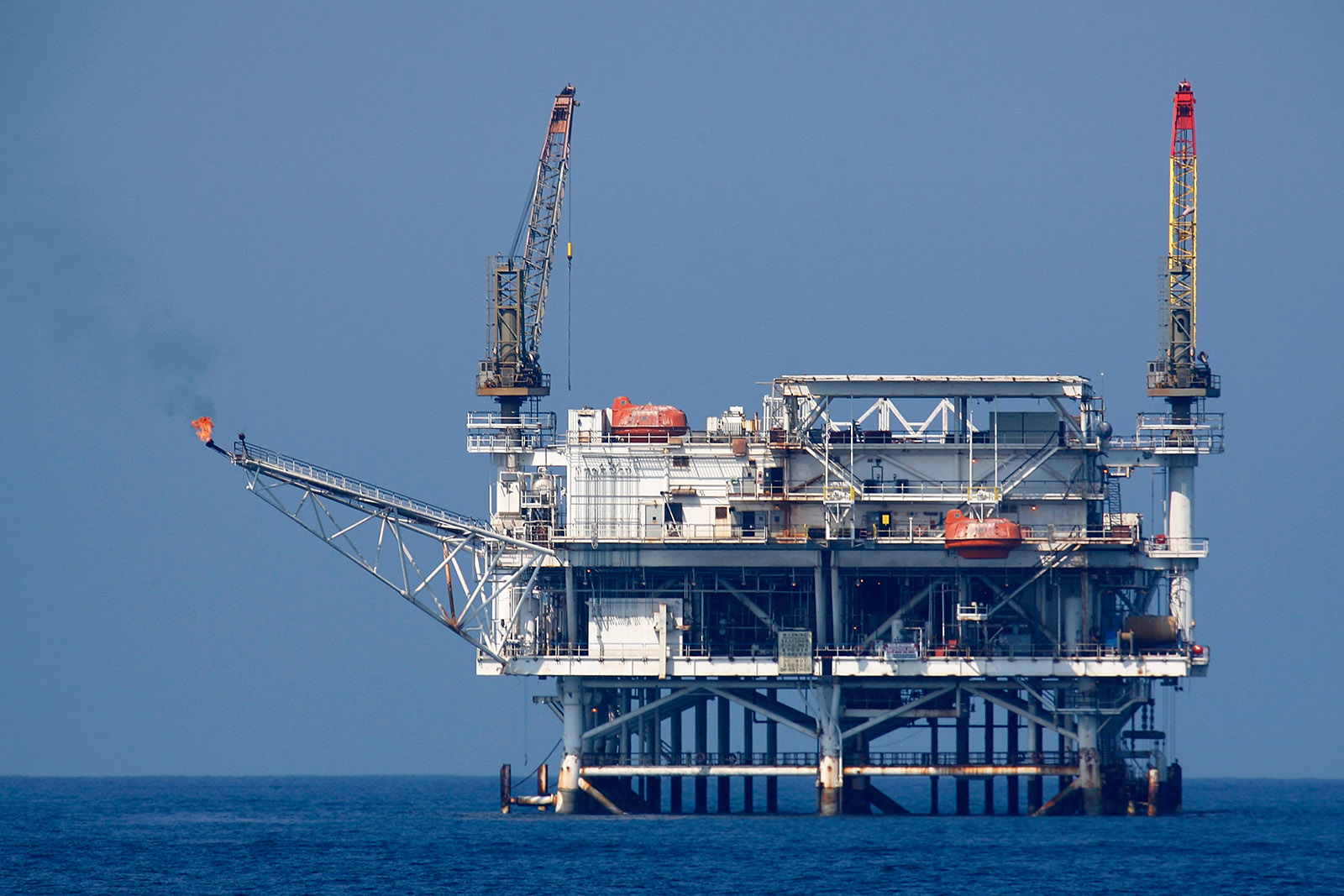 An offshore oil rig in Long Beach Harbor, California. Exploration activity in the oil sector will ramp up, but the shape of the demand recovery is incredibly uncertain.

The oil and gas sector is going through extraordinary times. The price of West Texas Intermediate, the benchmark for U.S. oil, which had been as high as $100 a barrel in 2015, turned briefly negative in April this year and is currently hovering around $40. Meanwhile, Exxon dropped out of the Dow Jones Industrial Index last month, after 78 years.

So what lies ahead for the sector? BRINK spoke to Trisha Curtis, a seasoned oil and gas analyst and CEO of PetroNerds.

CURTIS: When you actually think about the sheer volume in the drop in demand for crude oil and, therefore, the drop in price and the corresponding drop in activity, the industry and the market are having a really hard time comprehending it.

We started off this year at $62 oil in January. And when you’re that high, everybody thinks it’s going to 70. And what happened was prices cratered and went negative. This has never ever happened before — the speed at which the rigs dropped and activity went to zero.

There has never really been a period in history when companies couldn’t sell their crude.  At the height of the price collapse, some operators could not actually move their physical barrels — nobody would buy it, no matter how cheap it was.

The energy sector is now only 2.5% of the S&P 500. And Exxon is out of the Dow. These things would have been unfathomable a few years ago.

BRINK: Like you say, there’s been this massive dropoff in exploration activity. Looking out two to three years, will that ramp back up, or are we seeing a systemic shift away from big oil exploration in the future?

CURTIS: Exploration activity will ramp up. The shape of the demand recovery is incredibly uncertain, though. And those fears and uncertainty are weighing on prices and the upstream outlook. In Europe, you have BP, Shell, Total, even Baker Hughes talking about trying to shift to a greener portfolio, more gas, and even skew away from oil and gas. BP is actually selling their London office in St. James Square in London due to COVID. These are unprecedented things.

But I don’t think this really tells the whole story because they make it sound as though the industry is completely dead, and the reality is, it’s not. If the oil price were to stay around the $40-$50 range for six months, you’re going to see a corresponding increase in activity, both on the fracking and the drilling side — though we’re not going back to having 400 rigs in the Permian Basin.

For oil-dependent economies, like OPEC countries, things are a little bit different. When oil is 100% of your income, you have to make it work. The Saudis have a huge incentive to get prices slowly back to $50 and then keep them around that range and just make ends meet, as opposed to trying to ramp up anything. Price stability is now as important for the Saudis as it is for the shale producers.

BRINK: So if some of these oil assets stay in the ground because they’re not being explored, does that make this whole idea of a transition to a renewable economy easier?

CURTIS: My old boss used to say that the stone age didn’t end because we ran out of stones, and the oil age isn’t going to end because we ran out of oil. But whether or not this crisis itself is going to help propel the shift to renewables is a little more unclear. We are not going to run out of oil, because the world has plenty of it and the industry knows how to extract it, quickly and relatively inexpensively.

You have these oil companies getting on earnings calls and talking about bringing their carbon emissions down to zero at a future date. The question is: Is this moving the needle on their share price? Is it really buying them goodwill? And if it’s not, are they actually making money with it? And it’s not clear to me that either of those two things are happening, that they’re actually making returns on these investments, and that it is moving their share price.

We have seen an incredible drop in demand for oil this year, but it is by no means played out, and it’s really clouded by a lot of misinformed analytical information.

The question is: Are we going to be pushing these energy companies to be cash flow positive in the green sector? I think that is extremely important.

If we look back to the 2008 financial crisis and the drop in oil demand, we can see it never fully recovered in Europe. And it took a while to recover to pre-crisis levels in the U.S.; it was low unemployment and low oil prices that helped propel demand growth recovery in the past five years.

We have seen an incredible drop in demand this year, but it is by no means played out, and it’s really clouded by a lot of misinformed analytical information. Prior to COVID, the globe was demanding roughly 100 million barrels a day of crude oil. Supply and demand were roughly in line with each other. Now the projections are at roughly 90 mbd (thousand barrels per day) of demand on average for 2020.

Dangerous to Assume Collapse of Demand

The shape of the recovery and the ability to fly, especially internationally, will dictate demand levels in 2021. But forecasting a long-term collapse in demand because of what the global economy is facing right now with COVID — and the rhetoric on ESG and the negative sentiment on oil and gas — will yield incorrect results.

BRINK: There’s been lots of claims over the years by these companies that they are going to be greener, but not that much changes. Do you think it’s different now? Do you see a mind shift happening among oil companies?

CURTIS: There’s a spectrum. All the shale companies now have an ESG slide and talk about emissions in some form, but it’s a little different for all of them. And we now have the service companies doing the same thing. But a lot of this is pretty basic. It’s closing hatches. It’s making sure your pipelines aren’t leaking. It’s things like that.

Meanwhile, the smaller companies are just getting battered, and they’re not focused on ESG — they’re focused on producing oil, trying to do it efficiently and trying to make money. And right now, they’re just holding on for dear life.

In terms of the bigger operators and what they’re saying, they’re certainly investing in it. Whether or not it’s giving them returns or it’s going to be sustainable is another question.

The gas component is very, very big. Gas has a huge role to play globally, and there is a momentum shift toward gas, even while there is a hard line environmental shift away from fossil fuels. The operators ultimately have to make money — do they make a material shift into a completely different business and make money with that? They need time to make that shift.

You have to realize that all these shifts take time. The same goes for a genuine investor push to see these oil companies a little greener. The real question is whether or not that investor push is genuine and whether or not these operators will be rewarded in their share price for setting and meeting targets.