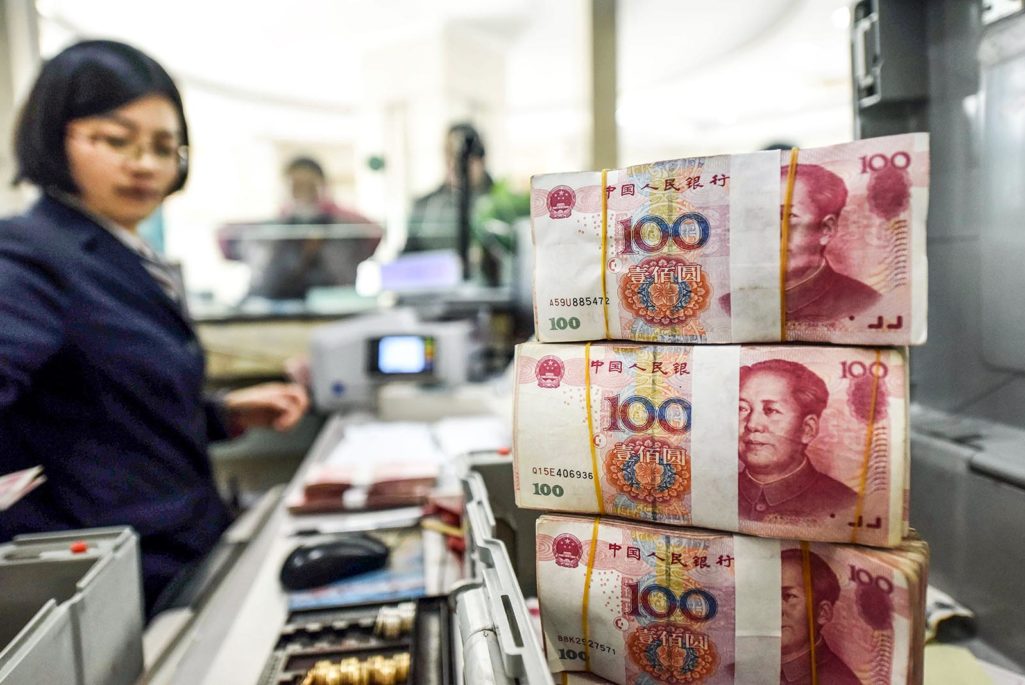 An employee counts 100-yuan banknotes at a bank in Lianyungang, in eastern China's Jiangsu province. China still struggles with stemming its massive outflows of currency and stabilize its balance of payments.

Last summer, China’s stock market collapse and unexpected devaluation deepened its capital outflow problem and accelerated the fall of reserves, which had started in mid-2014. Since February, reserves have started to stabilize. While the situation is clearly better, China continues to struggle in terms of stabilizing its massive capital outflows.

Within that context, foreign reserves seem to have become a policy target. Although capital outflows are still large, it’s not enough for reserves to start falling again. In 2015, the largest net outflows stemmed from the repayment of bank loans (close to $500 billion in “other investment” outflows), followed by unrecorded outflows of residents amounting to nearly $200 billion.

Portfolio flows (equity and bond) were also negative, but smaller. The situation has hardly improved in 2016, based on first quarter data. In fact, all types of capital recorded outflows, even net foreign direct investment (FDI), which was not the case in 2015.

It’s important to note that Chinese residents have been driving capital outflows for years. The difference in 2015 is that non-residents stopped investing in China and started to move their capital out. Still, the bulk of the outflow was made by residents. These are unrecorded outflows and also include the investment of Chinese companies, as well as the loans of Chinese banks abroad (increasingly in the emerging world). Looking into the details, currency and deposits were the bulk of the outflows (other investment) in 2015, while repayment of bank loans—as well as Chinese banks’ loans to overseas companies—have become more important during the first quarter of 2016. Portfolio investment has turned negative for both residents and nonresidents. Finally, for the first time since China’s open door policy, the first quarter of 2016, the direct investment of Chinese companies abroad surpassed foreigners’ direct investment in China.

A Peek Behind the Curtain: The Magic of Foreign Reserves Stability

Achieving stability of reserves requires a high degree of precision and tools. Beyond lifting the constraints on portfolio inflows—which does not seem to have worked yet, as net portfolio outflows have been larger than ever in the first quarter of 2016—outflows need to be managed more tightly.

Beyond official controls on outflows, there are at least four ways in which capital outflows from China may have been cushioned to avoid a loss of foreign reserves beyond official balance of payment data. First, capital leaving China could be in yuan instead of foreign currencies, which would not affect the level of foreign reserves. In fact, since October 2015, there has been a net outflow of yuan from China. Given that the CNY-CNH interest rate spread is positive, arbitrage reasons cannot explain such outflows. Further, these outflows are actually pretty sizable (-$207 billion since October last year).

Second, it has often been argued that China’s capital outflows were mostly good rather than “bad cholesterol” (i.e., it was Chinese companies and banks repaying debt). While their exposure to foreign borrowing has been reduced from the peak in 2015, the scale is not as massive as generally perceived. China’s total debt in foreign currency amounted to $1.705 trillion in the second quarter of 2016, a mere 15 percent decrease since its peak in the same quarter last year. Offshore issuance of foreign currency bonds by Chinese companies has been quite steady, while loans from banks offshore have been reduced. With regard to the offshore bond market, Chinese companies have continued to issue quite massively, but the net issuance has come down thanks to a wave of early redeemed bonds, most of which were issued by Chinese real estate developers.

Third, it is generally argued that the spending abroad by Chinese companies is behind a good chunk of the capital outflows, but it’s not. FDI net flows were positive until the first quarter of this year and, even now, the net outflow—as recorded in the balance of payments—is moderate. This might sound strange given the large M&A operations by Chinese companies announced since the beginning of 2016, but it is not contradictory, as a good part of those deals may have been financed outside China (leveraged buyouts financed in the offshore market).

Finally, some of the businesses closer to the state, China Investment Corporation being the best example, seems to have reduced the share of foreign assets as opposed to domestic assets, thereby reducing capital outflows from its purchases. More generally, M&A engagement is one thing, but bringing foreign reserves out of China is another.

Any way you do the math, capital outflows from China continue to be massive. A large current account surplus continues to cushion a potential fall in reserves, but more seems to be happening for reserves to be stable. Looking deeper into the nature of outflows, one has to conclude that the situation remains fragile. It is still residents driving the outflows and they do not seem to be a “good cholesterol” type (i.e. repayment of debt or purchases of assets abroad).

Meanwhile, China hasn’t fully resolved its balance-of-payments problem. The reserves are massive, but so are the “bad cholesterol” outflows. It is time to go to the doctor and increase the return on assets for capital to be willing to come back. Unfortunately, the Chinese authorities seem to be heading in the opposite direction, with increasingly lower interest rates and a lack of real reform for state-owned enterprises.

Chris Miller Associate Professor at the Fletcher School at Tufts University
URL: https://www.brinknews.com/china-continues-to-battle-massive-capital-flight-problem/
Get ahead in a rapidly changing world. Sign up for our daily newsletter. Subscribe
​​