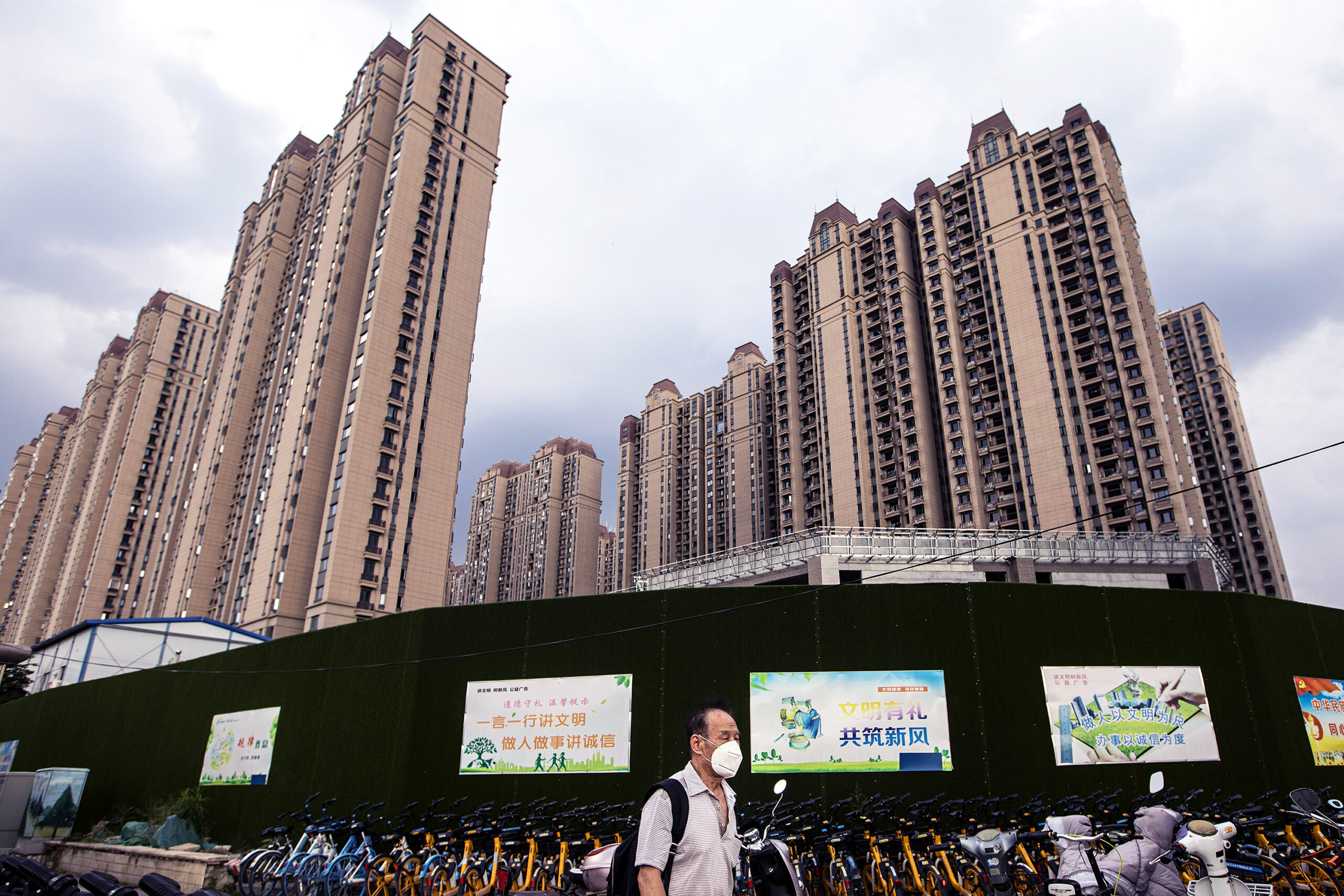 A man walks through the Evergrande changqing community in Wuhan, Hubei Province, China. China’s real estate sector is not bound to collapse out of Evergrande’s demise.

The Chinese real estate sector has long been too big and too risky, and it is not coincidental. It was central in the Chinese leadership’s plan to reflate the economy from the global financial crisis in 2008. Since then, the way forward for the sector has been to leverage debt so as to increase the supply of housing units, given Chinese households’ infinite demand for them.

In fact, housing has long been the most important asset to those in China as an investment of their savings, in light of the still draconian controls to capital outflows. Investment in housing has been El Dorado for Chinese households, as prices have been on the rise nearly continuously until recently.

Reasons for the Price Decline

Prices suddenly decelerated in 2021 for several reasons. First and foremost, there was a sudden regulatory push to control the overstretched balance sheets of real estate developers, which has resulted in restructuring some large real estate companies, such as China Fortune Land, even before Evergrande got into trouble.

In other words, Chinese households — even if flooded by a still rosy picture of the real estate sector and the Chinese economy in the local media — are increasingly wary about investing in real estate.

If Evergrande were not to deliver on its promises, pre-sales of housing units would dry up in China pushing most real estate developers to the brink.

The second reason is that the tighter controls do not only affect developers but also buyers of real estate who deal with huge down payments as well as the fear of a nationwide property tax, which has been rumored for quite some time.

Finally, Chinese households are feeling the brunt of an economy that has been decelerating rapidly for the last few years, pushed by its own overcapacity but also the U.S.-led trade and tech war and, more recently, the pandemic.

Housing Is a Major Source of China’s Inequality

The Chinese government’s crackdown on the real estate sector comes in the context of China’s rapidly changing long-term economic goal from growth “über Alles” to common prosperity. The crackdown involved the introduction of the so-called “three red lines” to limit their debt leverage, dependence on pre-sales, and short-term funding that was too short.

Common prosperity is President Xi-Jinping’s new economic mantra, following that of dual circulation, to highlight the importance of better income distribution and more equal opportunities. Excessively high — and growing — housing prices are probably the most important source of income inequality in China. Access to housing — or the lack thereof — is a key factor in explaining income disparity.

Evergrande could not but be the target of the government crackdown for a number of reasons. First, it is the largest real estate developer. Second, it is the most leveraged and does not fulfill any of the aforementioned three red lines.

Thirdly, Evergrande is heavily exposed to foreign investors, whether through the Hong Kong stock exchange or bonds issued in Hong Kong’s offshore market. The latter, which accounts for close to $20 billion, mostly denominated in USD, have mainly been bought by foreign private banks and asset managers for their high net worth clients.

It seems clear, after the lack of payment of a USD bond coupon last Thursday, that Evergrande’s offshore debt will go through a restructuring. Based on the example of China Fortune Land, which is finishing its own restructuring, this might not necessarily entail a nominal haircut but an extension of the maturity and the reduction of the interest due.

Foreign investors will probably be relieved if such restructuring is announced as they now lack clarity as to the future of their investment in Evergrande. Still, most of Evergrande’s debt is domestic and will need to be serviced, especially the amount received by Evergrande in pre-sales from Chinese households.

1.5 Million Are Waiting for Their Apartments

In addition, President Xi-Jinping’s common prosperity is really not about dumping the losses on the households. As such, the Chinese government has already given clear signs that local governments will take care of the unfinished projects.

A Bullish Outlook for Asia in 2021

Two important takeaways follow. First, China’s real estate sector is not bound to collapse out of Evergrande’s demise, as public money is going to be put to work to solve its systemic consequences within China. This does not mean, however, that everybody, especially not foreign investors, will be fully bailed out. Evergrande needs to serve as a warning signal of the cost of excessive leverage.

The second takeaway is that China’s growth will suffer from all of this. Not only is the real estate sector — which is a key contributor to China’s investment, employment and growth — going to slow down after Evergrande’s demise, but investors, in general, will be increasingly wary of China’s drastic change in priorities.

Economic success is no longer the goal, and financial excess will be penalized. Contributing to common prosperity is now the key objective, even at the cost of disgruntled private investors and, thereby, a potential stagnation of the economy.

Graham Pearce Partner, Global Defined Benefit Segment Leader at Mercer
URL: https://www.brinknews.com/evergrande-is-the-consequence-of-an-unsustainable-economic-model/
Get ahead in a rapidly changing world. Sign up for our daily newsletter. Subscribe
​​